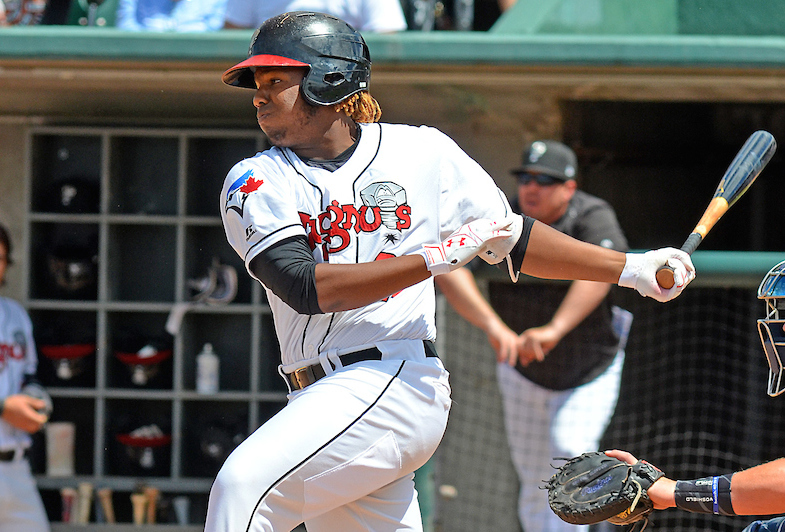 Wilson Karaman went through the Cal League and named a top prospect along with others of note for each aspect of hitting and pitching, so we thought we’d do the same for the Midwest League. Hope you enjoy it!

Best Hit Tool: Vladimir Guerrero Jr., Lansing Lugnuts (Toronto Blue Jays)
Guerrero’s exploits in the Midwest League this season were well documented, but his approach at the plate is absolutely stellar. He has a clear plan of attack, displaying excellent control of the zone while waiting for his pitch. He boasts enough bat speed to catch up the hardest of fastballs, yet recognizes offspeed out of the hand. Most importantly, he has outstanding barrel control, capable of squaring up pitches in every part of the zone. All of it plays well together, and given the hard contact he is capable of generating, it makes him an incredibly dangerous hitter, and it’s why he narrowly edges out his teammate Bo Bichette for this spot.

Vladito might possess the best hit tool of the Midwest League but a case can be made for Bichette being 1-B. The swing is still violent with above-average bat speed and mild leverage but there is an approach not often seen in a player his age. He has a good command of the strike zone and rarely gets fooled by offspeed. The power is real as well and will only continue to grow with physical maturity. These two teammates with MLB pedigrees made Lansing a fun team to watch. Hiura only spent a brief amount of time in the Midwest towards the end of the season, but he was quick to distinguish himself. He is an advanced hitter with a well developed understanding of the strike zone. He is capable of hitting the ball well to all fields and displays great timing and bat control. He falls in the honorable mentions in part due to the limited looks we got this season, but his bat looked as capable as anyone’s in the league this season.

Best Power: Emmanuel Tapia, Lake County Captains (Cleveland Indians)
Tapia has raw power that is unmatched in the league. Thick and heavier than his listed 215, he uses pure strength to muscle the ball out to all fields. But with the bulk comes a slow-motion swing that can be exploited by velocity. As the year progressed there was some improvement in pitch recognition, however strikeouts remain abundant. The rest of the tools are below average for Tapia, but he can absolutely crush when he gets ahold of one.

One of the biggest surprises for me this season was the development of power from Tatis. Prior to my initial look back in April, I expected to see a light-hitting speedster. While the speed did not disappoint, it did not take long to see that the power was for real. Quick hands and wrists, above-average bat speed, and loft in the swing generated some of the longest home runs that I witnessed all summer. The power combined with an approach that improved throughout the summer has vaulted put Tatis at the top of the Padres prospect list.

Guerrero’s power is nothing to sneeze at either. H can hit bombs, with much of his power coming from incredibly strong hands and forearms. He sacrifices some of his raw power in games in order to maximize contact, but he put on a show at the MWL home run derby and hit one of the longest balls I saw all in season that hooked just foul in South Bend. The ability to hit for power along with his penchant for contact are why Guerrero is considered one of the best prospects in the game. Cruz was fascinating to watch this season before he was shipped to Pittsburgh in the Tony Watson deal. Listed at 6-foot-6 (but likely taller) and 180 pounds, he already has plus raw power despite a rather awkward swing that looks like it’s coming from someone who has grown seven inches in two years. A lot of it is pull power, but he has the ability to hit it out to all fields, and there could be untapped potential as he hardly engages his lower half. At present, Cruz doesn’t top the others on this list, but if he bulks up over the next couple years, he could end up with more power than any of them.

Best Speed: Jose Siri, Dayton Dragons (Cincinnati Reds)
Siri’s bat brought him notoriety this summer when he hit in 39 straight games breaking the Midwest League record. The swing is quality, but his speed is what helped keep the streak alive late into the summer. He is extremely fast to accelerate, and has plus raw speed. I had a clock as low as 3.97 on a dig from home to first. There is still some rawness to his stolen base utility and improvement needs to be made in picking his spots but he should be able to rack up steals at each level. The speed and quickness also allow a lot of ground to be covered in centerfield and paired with an aggressive approach turn singles into extra bases.

There were a few players that I saw this summer that have more raw speed than Lowe, but none matched his aggressive nature on the bases. Long legs make for an initial lack of quickness out of the box but he accelerates fast and shows plus raw speed. Throughout the summer, I recorded multiple sub 4.0 clocks from home to first. The combination of baserunning IQ and aggressiveness made Lowe stand out this season. You could make a case to put Tatis in consideration for every category. He’s ultra aggressive on base, looking to steal or take an extra base at every opportunity. There were times when that aggressive nature was a game changer both for the positive and the negative. He has plus raw speed, 4.10 home to first average on multiple clocks. I do expect it to play down a bit as he matures physically but there will still be plenty of stolen bases in his future.

Best Infield Glove: Gavin Lux, Great Lake Loons (Los Angeles Dodgers)
Lux is a no-doubt shortstop, and it’s pretty easy to see when you watch him play. The word that really comes to mind is clean. He isn’t the fastest (though he is fast) or the smoothest (though he is smooth), but he puts himself exactly where he needs to be. He has a great internal clock and an above-average arm, which work together to ensure he never rushes a play. He spent a good amount of time at second this season in order to give Oneil Cruz some time at the six, but there’s no chance he needs to shift over. Lux will end up being an above-average defensive shortstop in the majors.

Originally drafted as a shortstop, Potts has made the transition to third base seamlessly. He has average foot speed but makes up for it with plus instincts. He displays quality hands and smooth transfers making a plus glove at the hot corner. Behind the plate Ice is athletic with good instincts. He is agile and fluid out of the crouch and has a strong accurate arm. There are some questions whether the bat will play at the major league level but there is no question about the glove.

Best Infield Arm, Isaac Paredes, West Michigan Whitecaps (Detroit Tigers)
Traded in the deadline deal for Justin Wilson and Alex Avila, Paredes has the potential to be a major piece in the Tigers rebuild. Only 18, but physically mature, he has the build of a tank which make a move away from shortstop likely. The arm is strong and he displays a quick transfer from the glove and accuracy even on the move.

While there are questions about Guerrero’s ability to stick at third base, his arm is not one of them. He has plus arm strength and is capable of making a throw from the foul line. He can be a little wild at times, but that is more due to his tendency to rush, and the arm plays comfortably at the hot corner. Chisholm played in Kane County for about six weeks before disappearing from the roster with an undisclosed injury. While on the field, Jazz showed solid D at short accompanied by a plus arm. Aided by fast transfer, he has an easy arm action that unleashes strong throws from across the diamond.

Best Outfield Glove: Derek Hill, West Michigan Whitecaps (Detroit Tigers)
There have been many stumbles along the way for the former first round pick, mostly due to injury. There is also concern about the bat and whether or not he can ever be a major league hitter. However, the constant about Hill has been his plus plus defense in centerfield. He plays very shallow, relying on his speed to cover a wide area of ground, making difficult plays look routine. Hill is a major league caliber defender but just needs the bat to develop to make it there.

Cameron doesn’t look flashy out in center, but every action is calm and graceful. He has fast reads, takes good routes, and positions himself very well. He uses his good instincts to make up for his relatively average speed and seems to cover much more ground than he should. He won’t be a defensive superstar, but he should be able to stick in center. Solid yet unspectacular is the best way to describe Reed’s defense. Tall and athletic, he doesn’t’ look like he’s moving fast but his long strides make for a lot of ground covered in little time. He gets a good initial burst and tracks the ball well. Reed definitely has the ability to play center field at the highest level. Buddy Reed

Best Outfield Arm: Carmen Benedetti, Quad City River Bandits (Houston Astros)
I like Benedetti, who has some decent offensive ability but is ultimately limited due to his corner profile, but his loudest tool by far is his arm. It’s a canon, and accurate as well. It carries well and low, allowing for a cut off while still getting to the target as fast as possible.

The son of former major league pitcher, Mike Capel, Conner displays easy plus arm strength. His throws are accurate and show good carry. If right field is where he ultimately ends up, the arm is more than adequate. Despite being limited to left field for most of the season, Silverio has a strong arm that he likes to unleash. He puts his full body behind his throws and gets them off with good velocity, but they carry well and stay on line.

You need to be logged in to comment. Login or Subscribe
sdsuphilip
Surprised Tatis didnâ€™t get the power nod
Reply to sdsuphilip
nrgraham
He was in the discussion and made our others of note. Tatis is by far the better prospect, but in just terms of power Tapia holds a slight edge.
Reply to nrgraham
tbdubbs
Any love for the toolsy-toolshed Taylor Trammell for any of these (except OF arm)?
Reply to tbdubbs
nrgraham
I like Trammell, and you're right there are a lot of quality tools in his game. He was in consideration for speed.
Reply to nrgraham