There’s something about knocking the opposing starter out of the game that feels right, even if you aren’t scoring runs. It means you’ve removed the opposition’s best option for that day; it means you’ve created havoc; it means the other team has to get through more innings with inferior options, and those inferior options are going to be tired for the subsequent games in the series. Knocking out the starter is a mile marker on the way to victory, the baseball equivalent of field position—it doesn’t mean you’ve made it, but you’re getting there.

We know how the OBP revolution of the last decade affected pitch counts, themselves an agitator for the earlier removal of starters. But this war of attrition isn’t what it once was. Certainly MLB orgs want their starters to go deep into games; however, they’re also aware of the detrimental effects of allowing a starter to face a lineup a third or fourth time through.

In other words, these days both teams find themselves chasing the same goal: getting the starter out of the game before the sixth inning. 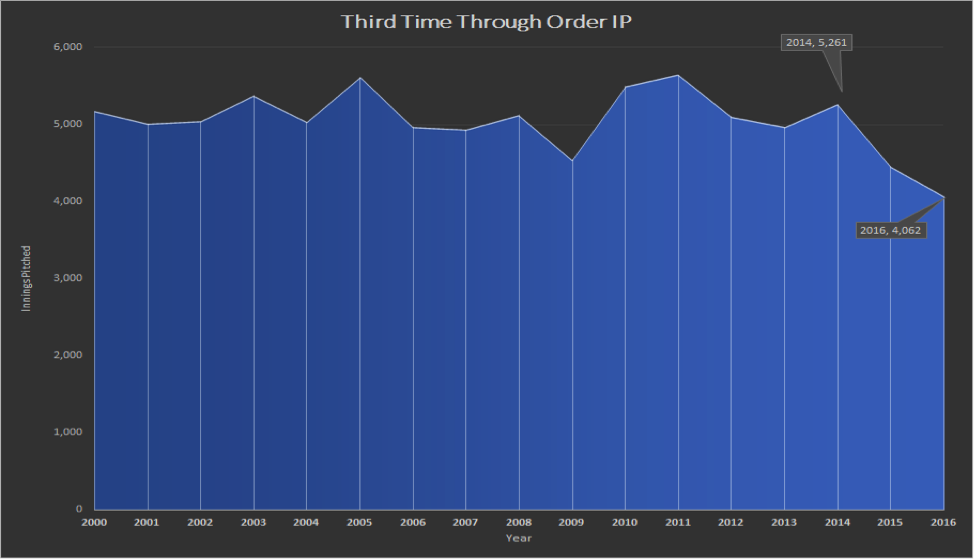 While there is some variation in the number of Third Time Through the Order (TTTO) innings, we’re at a clear low point, with a dramatic shift beginning in the 2015 season and a 1,200-inning drop from 2014-2016.

What’s interesting is that despite dramatically fewer TTTO innings being thrown, the TAv allowed in these innings is largely unchanged, meaning that despite a higher concentration of what one might assume would be better pitchers being allowed to face lineups a third time, lineups aren’t doing any worse. Of course, as Rob Mains recently pointed out, this could be because roster changes have led to more pitchers having to wear one for the team.

As we’d expect, relievers are throwing more innings due to this dropoff. Reliever innings are not only up in aggregate, but they’re up substantially in the middle innings (4th-6th): 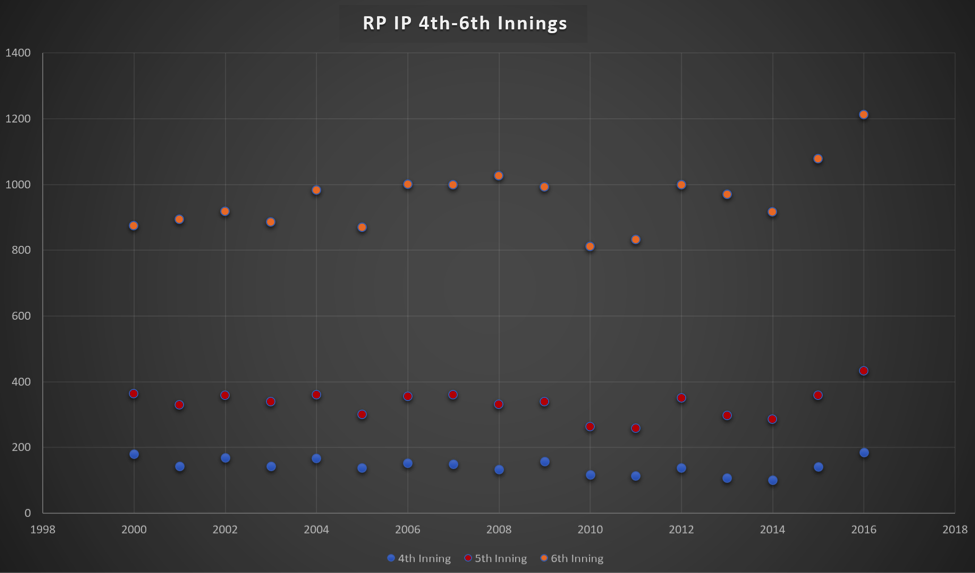 (Authors note: The axes are not labeled but the x-axis is years, and the y-axis is innings pitches)

While this chart shows elevated levels of reliever usage by inning in the past, last year represented a significant increase from recent highs. Not only are starters throwing fewer innings while facing a lineup for the third time, but reliever usage has edged upward correspondingly. Here’s the thing, though: relievers are performing, on average, about the same as they were when they were throwing fewer innings. 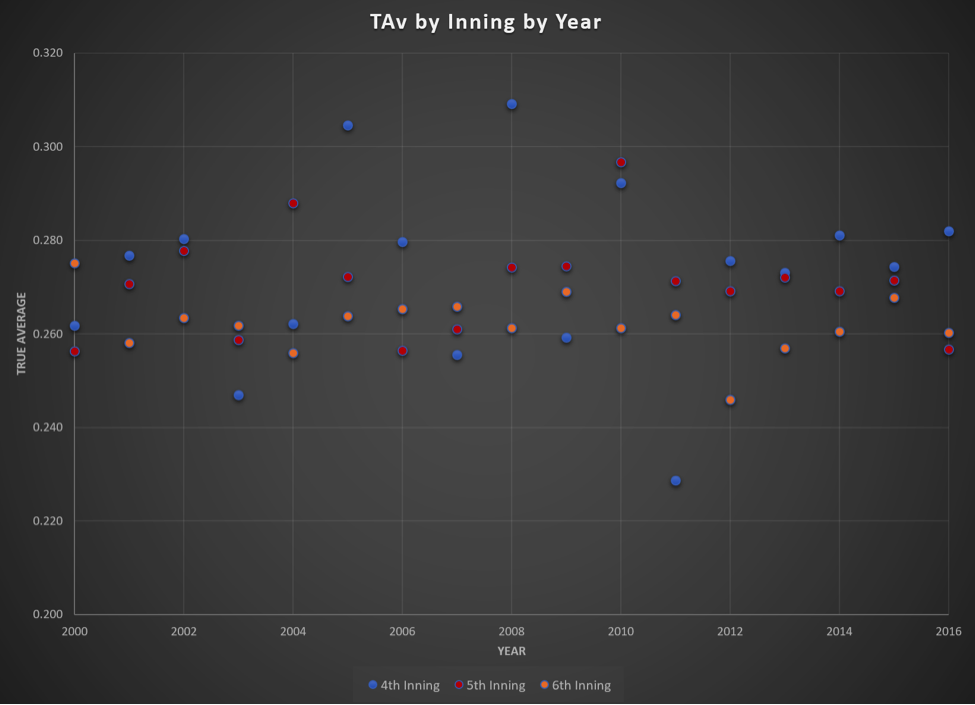 This indicates that despite the expanded number of innings thrown (and relievers used) teams are drawing a deeper reservoir of talent. The above graph shows a mixed bag, with some obvious outliers on the upper and lower ends, but not any significant changes in TAv allowed by relievers despite the uptick in innings.

Some teams have responded by becoming more aggressive. Chris Mosch detailed the Rays new approach in the 2015 annual, highlighting the Astros and Orioles along the way. Still, wearing down opposing starters still has its benefits, especially over the course of a series, but we’re seeing diminishing returns on this strategy, as teams build their pitching staffs around the notion that several starters will see 18-20 batters at most. Strikeout-oriented pitchers are still reaching their pitch counts, but they’re able to concentrate their efforts earlier, and more often, without worrying about saving anything for the later innings.

We haven’t experienced the same mourning for the seven-inning starter that we did for the death of the complete game. Perhaps we’re in those early stages, where the decline is obvious but we’re rationalizing it away. Look at Clayton Kershaw; look at Chris Sale; look at Madison Bumgarner when he’s not near dirt bikes. We’ve watched the gradual changes game over game, so our reference points aren’t far enough apart. Those who aren’t as immersed in the game might have a different perspective. The casual fan will see a starter get pulled after 5 â…“ innings, watch the bullpen blow it in the eighth, then log in to Twitter and blast the starter for his lack of endurance, and for putting the bullpen in a bad spot. Baseball’s audience should understand that it isn’t that pitchers are unable to carry the burden of additional innings.It’s that, for the vast majority of teams, it’s a better strategy to dip into the deep well of high-octane relief arms than rely on a tiring starter.

Consider how this plays out going forward: it’s unclear if there’s a reaction from batters that makes sense. Does getting more aggressive make a significant difference in this scenario? It would be tough to imagine so. Perhaps the most realistic consequence is in pitcher development: Might we see more pitchers with a potent top two pitches but who lack a third (or fourth) option in their repertoire, who are generally consigned to the bullpen, get a longer leash as starters, since they won’t be required to face the lineup a third or fourth time? Will starters pitch more on the edges of the zone, knowing that running up their pitch count by nibbling will matter less when they’d be removed from the game early anyway?

By and large, changes to the mechanics of the game do not occur rapidly; rather they reach toward wins the way a plant reaches toward the sun. While rule changes, like a 26th roster spot to expand benches and push back on reliever efficacy, could curb this, it’s not often we see rule changes that affect rosters directly. But what must change is our sense of honor in stamina, and that the idea of not going deep into games is a sign of weakness. These changes, too, are slow, and the game is ahead of us (the fans) for the moment. We need to adjust to meet it.

Special thanks to Rob McQuown, Patrick Dubuque, and Michael Baumann for their assistance.