There’s the expert review, and then there’s the rollout. The experts get the first look at something. They get to test it on monkeys, they get to interview the director after the festival screening, they get to put dummies in the passenger seat and drive it into a wall to see whether the cup holder is going to break off and stab a kid in a car seat in the neck. Experts look at the thing and tell us, here now, it’s ready and it’s amazing.

Then, sometimes, the thing sucks. It bursts into flames at high speeds, it cures your migraines but creates some sick-looking tumor on your lip. Extremely Loud & Incredibly Close was supposed to be some kind of a lock to win best picture, until it came out and we all said “that thing sucks, stop playing it!” Reality can make for a cruel collision.

So here’s Javier Baez, and here’s reality, and last night they collided. The experts have had their say. Now we get ours. A non-scout’s scout-like not-scouting report on Baez’s first game.

Swing
Javier Baez swings hard. There’s a moment in his first at-bat when he takes two pitches, both of them high out of the strike zone, and you wonder—uh oh, maybe nobody taught this kid how to swing a bat. Looks like the experts botched another one, you think, and that's when Baez starts swinging at everything, like a farmer trying to defend his crops with a rolled up newspaper against a mile-wide swarm of locusts. Brett Anderson gets him going on a fastball low and in, then just keeps moving further in with sliders and fastballs, and Javier Baez swings hard enough to open a few new dimensions while pitifully tapping foul balls in a trickle down the third base line. Finally, this, which is not a good swing:

It’s the swing you would take if you were trying to hit a line drive at the guy in the on-deck circle, which is not (yet) the goal in baseball. I’m pretty sure that, from a certain angle off to the side, Baez’s legs have formed a swastika. This swing is weird, and it’s scary, and there’s a possible swastika in his legs. I’m not sure I like this, though I'm also not completely sure that the beginning of this sentence wasn't intended to be a setup for the corny twist: "I'm not sure I like this…. I love it!"

Approach
Oh, man, does he swing hard. This first plate appearance he swung pretty hard, but you don’t really start to appreciate how hard he can swing until later, when he swings so hard that the involuntary recoil from his backswing alone still has enough force to bust open a coconut.

It’s important for a major-league hitter to have a good approach at the plate, to have a plan, to adjust to the pitcher and to control the strike zone. Does Baez? Historians will decide. He swings hard!

Baserunning
The main thing is how hard he swings. Imagine somebody hands you a driver. You set up at the tee, then somebody blindfolds you. You try to take your shot, but you miss by four inches and fly open wildly after you fail to connect with your target. You quite possibly roll down a hill; you quite possibly hit your pal Steve with your backswing and now Steve veers to the left whenever he rides a bike. This is Javier Baez, swinging a long club at a tiny ball with the force of a blindfolded 21-year-old who's got nothing to lose.

A human body in this shape: 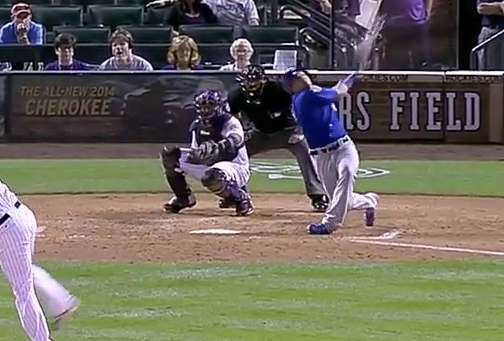 A human face in this shape: I did not get a chance to see him run the bases, partly because he swings so, so, so hard. If he has a .350 BABIP and every game he plays goes otherwise like his first game did, he’ll run the bases less than once every two days. He swings like it always felt like your dad swung you when you were a kid.

Defense
He swings so hard that it’s actually hard to imagine how he will ever hit anything. He starts his swing so early that he looked baffled by anything that dropped below 80 mph, taking a center-cut curveball from Brett Anderson and a hanger from Franklin Morales. So early that, when he appeared to be sitting on sliders later in the game, he was beat by fastballs.

In fact, if you go frame by frame, there’s essentially one frame where he looks like he’s got any chance at all—the frame where the ball is crossing the hitting zone. Before that, you swear he’ll never catch up to it. After, he looks out of control. Only that one frame, when he miraculously catches up just (or almost just) in time, do you see what would happen if the bat hit the ball.

And, because he’s been doing it for the past three years, you know that the bat does hit the ball.

Makeup
Fourteen times he swings, and 13 of them are hard. They send him sprawling across the plate, or facing the diamond club seats behind home plate, or leaning on a knee, or with his bat shaking with recoil and anger. (One is a checked swing, or, you might say, an extremely hard take.) Of the 13, seven are fouled, six of them tapped or tipped. Three (plus the checked swing) are whiffed. Three are put in play, and two of them are glorious:

Is it actually good to swing hard? It's good to have bat speed, but is it good to swing so hard to do it? This is pretty much the question, isn't it? Everything good that happened to Baez happened because he swings like Batting Stance Guy doing a caricaturized version of an already ridiculous swing invented by a 12-year-old holding a broomstick. But he missed an awful lot of hittable pitches against some mediocre pitching in his first game, and all that was arguably because of that swing, too. Would you believe that, after one game, it's just too soon to say?