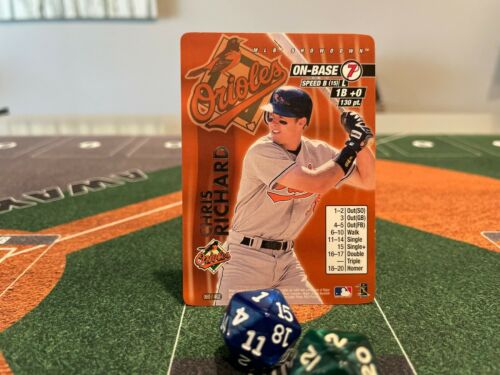 Why this game?: Trading cards have been mid-resurgence for a few years now, and Wizards of the Coast’s baseball-themed effort is no exception to the renewed interest. Apart from someone going to the trouble to digitize a year’s entire set, they’re officially old enough to merit collectible status. A 2003 Barry Bonds foil recently went for $76; a full first edition base set went for $449.99 in May. It’s not necessarily the demand for the Pokémon sets WotC was minting two decades ago, but these games were fantasy baseball for people who couldn’t play fantasy baseball, but did possess a folding table. It speaks to the interest Showdown caught that it’s stayed in imaginations so much longer than the typical fantasy baseball analogue.

How does it play?: Someone who designed this game liked baseball, or at least understood it well enough to recognize that it’s, at its core, a two-player game. That’s just one perspective, but for those who view fielding and baserunning as largely ornamental (a cohort that would seem to include most baseball video game designers), baseball is ultimately a very simple, head-to-head matchup. That’s a winning formula for collecting card games, particularly those aimed at children. While both “advanced” and “expert” versions of the rules added layers of complexity, core gameplay is a flow chart.

The player controlling the pitcher rolls a 20-sided die. The results of the roll are added to the pitcher’s control number, and that is compared against the batter’s on-base stat. The higher result gains advantage, at which point the batter rolls the d20 and selects from the chart on the card of the player with advantage, which has markedly better outcomes for either the pitcher or batter. For example, compare this 2000 Pedro Martinez card and a 2004 Barry Bonds. 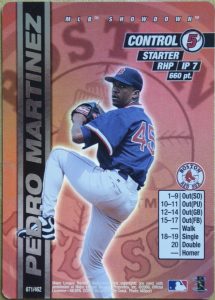 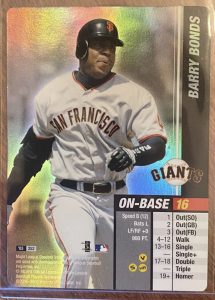 Non-superstar players don’t have outcome charts quite so polarized, but as you can imagine, the die rules this game. The entire rulebook (ahead of advertisements and card checklists) is 20 pages long, including the advanced and expert rules. Much of what’s left is given to the team construction rules: each player has a point total based abstractly on their value, and managers have 5,000 points to build a roster from their bank of available cards. This system is the exact system favored by most daily fantasy leagues today, so kudos to WotC for simplifying a process many games render tedious.

The advanced game is simple, too, introducing such concepts as home field advantage, “fielding and arm,” and “speed.” The expert version steps it up by introducing strategy cards, which allow for stolen bases, hit-stealing defense, pitcher fatigue (rather than a set number of innings of effectiveness, after which their dice rolls come at a penalty, a pitcher is further hamstrung based on number of runs allowed), and batter handedness. Even with the expert rules factored in, the entire at-bat sequence, and all its permutations, can be displayed on a single page. 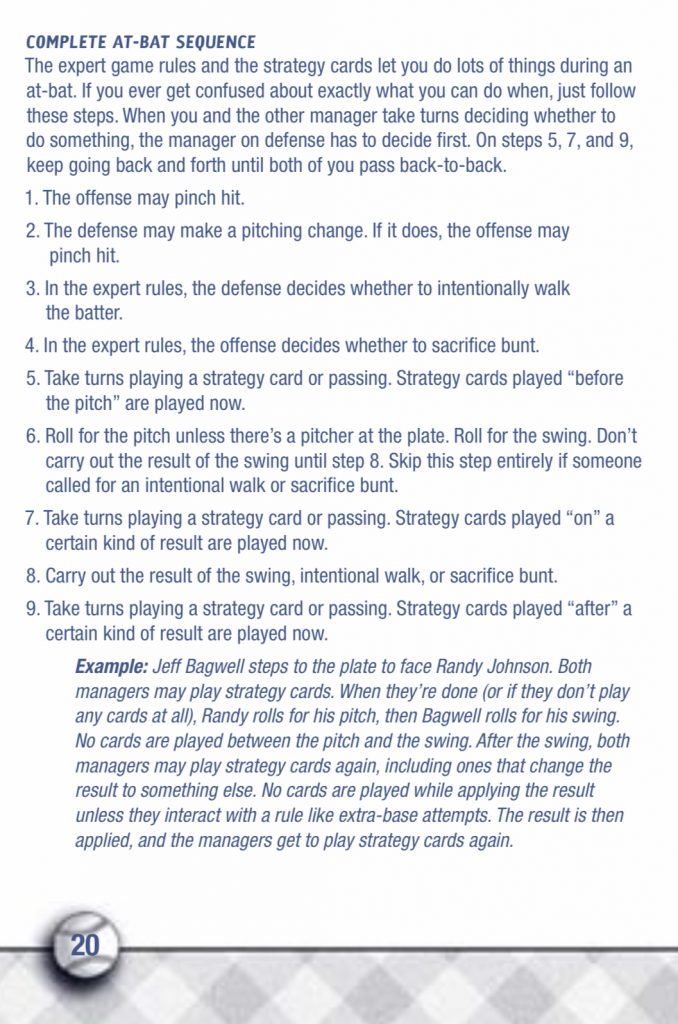 What this game does better than the rest: Answering this question requires defining what constitutes “the rest.” Better than other collectible card games? Well, MLB Showdown pretty much cornered the market in terms of baseball card games. Other collectible cards? I’m not especially savvy with the trading card market, but I think the sets are generally well-designed: you wish some of that unsightly legal text could go on the backside, but the cards maintain a consistent design language across sets while modernizing and streamlining. Matching the holographic foil to the photo’s background further emphasizes the player as the main attraction. What about fantasy baseball? Well, I can’t speak to the balancing of the system, but this makes roster construction easy, and shares another trait with daily fantasy: it gets that sometimes, people want to know who wins sooner than the end of the week. People will do a lot of things for nostalgia, but the digitized edition of the game made (free of cost) for Tabletop Simulator is made with more than aesthetics in mind—it’s meant to be played. How many baseball games is that still true of, two decades in?

Its industrial impact: While MLB Showdown was by no means a failure—it was printed for five years across 33 sets, with thousands of distinct cards put into print—collecting card games are, with few exceptions, a limited-time event. Games like Magic: The Gathering are the exception, not the rule. If collectors are there for the speculation, they still need people to engage with the game enough to perpetuate their segment of the market, and there’s no reason to make a baseball CCG whose primary draw is aesthetics given the market originated with trading cards.

Retaining audiences and drawing in new ones are, to some extent, at cross purposes—extant audiences want to be able to utilize their collections, but new players will be deterred if the barrier for entry is too high. A game has to reach a certain critical mass to be self-sustaining, and it’s difficult to see how MLB Showdown could have achieved that against the meteoric rise of online fantasy, to say nothing of now-ubiquitous sports betting. This game couldn’t have come out later—and, really, it never would have existed without Pokémon, so it couldn’t have come earlier. A time-localized experience isn’t a bad one, and even though MLB Showdown is the only physical baseball CCG of which I’m aware, I’m also fine with calling it the best.

MLB Showdown’s Wins Above Replacement: 3.7. A dependable regular while around, and looked back on fondly, but not a career that revolutionizes the future of the sport (or card games industry). 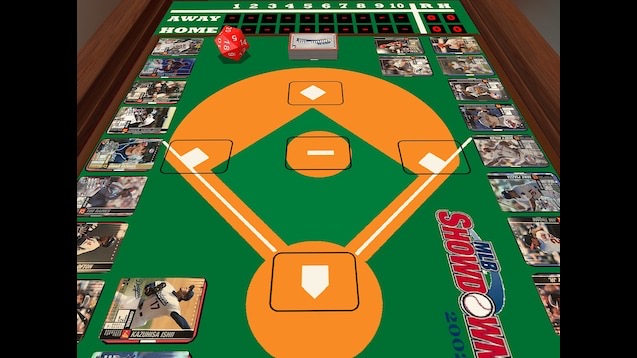 You need to be logged in to comment. Login or Subscribe
Jon Crate
I played this one for a while. Really enjoyed it. One thing about the game that was interesting was that bench players only cost a fraction of their actual point totals. This meant that you'd see higher cost guys sitting around waiting to pinch hit. I remember Carlos Delgado being a favorite for that.
Reply to Jon
Ginny Searle
lol yeah, i appreciate that you couldn't stack teams with all the best players like a lot of people do in video games, but it's cool there was that extra layer to provide more options
Reply to Ginny