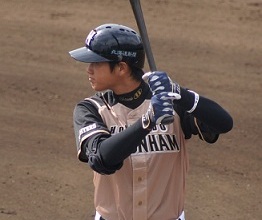 Few things are more pleasant than watching an unique, once-in-a-lifetime talent blossom into the superstar we expected him to be. One of them is watching it happen twice. Shohei Ohtani’s rise to stardom this year is just a middle chapter to fans in the Far East, and a handful of fanatics from elsewhere, who followed him closely from day one. Below are eight moments where Ohtani showcased his tantalizing potential during his time in his home country, some personal to me and others belonging to the world.

Believe it or not, Ohtani was far from the consensus best talent in his draft class. Some thought fellow high school right-handed pitcher Shintaro Fujinami was a better prospect on the mound. And it looked like the lanky hurler had proven them right three years into his career, until Ohtani had his breakout campaign as a true two-way player and Fujinami started what has turned out to be a six-year (and counting) free fall in 2016.

In their draft spring, the two faced each other in the first round of the Spring Koshien tournament. While Fujinami and his Osaka Toin squad ultimately defeated the Ohtani-led Hanamaki Higashi 9-2, with all nine runs charged to Ohtani (five earned), the future Angel displayed his potential with the bat by going yard off of his arch rival. It was his 37th long ball in his high school career, and perhaps the first time we saw the flashes of his prodigious power under the national scrutiny.

This was perhaps the moment Ohtani rose to stardom. In the sixth inning of the semifinal game in the Iwate regional tournament for the Summer Koshien, the right-hander hit 160 km/h (99.4 MPH) on the stadium gun, becoming the first high school pitcher in the country’s long, hallowed amateur baseball history to do so. On this day, it seemed like everyone, even non-baseball fans, realized that there was a once-in-a-generation monster in the making, and they started following the then-18-year-old’s every move.

Exactly one year after his Koshien dinger, Ohtani showed flashes of his two-way supremacy for the first time at the professional level, albeit very briefly, in an exhibition game. Despite a wild pitch and an errant pick-off throw, he tossed a scoreless eighth before grounding out to first in the bottom of the inning and playing right field in the ninth.

I had the good fortune to to witness him displaying a full two-way skill set that evening in person, as shown in the above blurry videos. Like any prospect who was less than a month removed from his high school graduation, Ohtani looked raw and unpolished. However, he sat mid-90s and touched 97 on the stadium gun while showing a sweeping slider. The aforementioned groundout was hard-hit. Even from day one, the sheer talent was obvious to anyone who paid attention.

It’s also worth noting that the 14,144 people in attendance (not bad for a meaningless game on a Thursday evening) were deked into a collective roar when the PA announcer introduced fellow Fighter Yutaka Otsuka, with whom Ohtani shares the first syllable of the last name, as the pitcher in the seventh inning.

It was a cloudy, muggy afternoon at Jingu Stadium, and not particularly a good one for the Yakult Swallows and their fans, as they surrendered 10 runs to the visiting Fighters, partially due to three errors each by infielders Tetsuto Yamada and Takahio Araki. Wladimir Balentien, who set a new NPB single-season HR record with 60, walloped a pair, but it wasn’t enough to erase the deficit.

My seat for the game was a few rows up from the Swallows bullpen, which is located in foul territory down the right field line, to see Nippon Ham’s two-way rookie sensation patrol right field from no more than 120 feet away, and bat from a little farther than that. Ohtani contributed to the Fighters’ offensive explosion by going two-for-five with two doubles. His lead-off two-bagger in the second inning came so close to being his first long ball of his professional career, hitting the very top of the left-center wall. Even when he failed to produce, he ran a sub-four home-to-first on a groundout.

However, what stuck to me about Shohei in this game wasn’t his excellence at the plate nor his blazing speed. There was a kid in my section who was screaming his name to get his attention. After an inning or so of screaming, the kid finally got his attention, as he looked waved towards where the voice was coming between plays. The story tells how Ohtani was a household name at the ripe old age of 18. From the get-go, he was hyped up like teenage Bryce Harper, followed closely by everyone, even non-sports fans, like Michael Jordan or Ken Griffey Jr (spending his amaeur days in Japan, where top high school players are treated like superstars, also helped).

In terms of overall contribution, 2015 was perhaps his career year to date for Ohtani on the mound, certainly during his time in NPB. His 31.6 K% led all NPB hurlers who surpassed 100 innings that season. Various advanced metrics (according to DeltaGraps) tell us he was by far the most dominant starter. And most importantly, he stayed healthy and amassed 160.2 innings, a mark he’s never eclipsed since.

He turned in arguably the best start of the year on August 18th, scattering six hits and walking just one while striking out 12 in nine scoreless. The opposing Chiba Lotte Marines lineup came nowhere close to figuring out his arsenal, which included a fastball touched 99 on the stadium gun, a devastating slider, and a bottom-dropping splitter. It was rumored that Randy Johnson, who was at the game with his fellow DBacks front office members, raved about Shohei’s performance. It seemed as though he had reached his pitching zenith at age 21.

His brilliance on the mound came at the expense of hitting, though. He hit a mere .202/.252/.376 in just 119 trips to the plate, and went down on strikes in 43 of them. He was limited to a pinch-hit role in the second half. It’s safe to say it was the first major developmental hiccup he experienced.

Lest we forget, Ohtani’s MVP-caliber campaign at the plate this year has come on the heels of a vastly disappointing 2020. This is not the first time his bat took a major step forward after plummeting the year before. In 2016, Ohtani got off to a scorching hot start to the season, going yard eight times through mid-May, five of which came in five consecutive games in which he batted.

His stellar performance forced the Fighters to abandon DH on days he pitched come late May (notice another similarity to his 2021 here?),  and he made the unconventional usage worthwhile more often than not. The signature moment of the historic two-way run came on July 3rd, when he led off the game with a first-pitch homer, drew three walks while tossing eight scoreless frames.

In a way, 2021 has been a déjà vu all over again for fans on the other side of the Pacific.

Thanks largely to Ohtani’s heroism on both sides of the ball (.322/.416/.588, 22 HR in 382 PA, 174 K, 45 BB, 1.86 ERA in 140 IP), the Fighters clinched the Pacific League pennant, and subsequently the Japan Series title. The pinnacle of his postseason run was the ninth inning of the fifth and final game of the Climax Series Second Stage, where he came in to save the game after a one-for-four day at the plate. On the first pitch to Yuki Yoshimra, the flame-throwing righty hit 165 km/h (102.5 MPH) on the stadium gun, surpassing the record he had set a month prior for the fastest pitch thrown in an official NPB game. That benchmark still stands today. It was an encapsulation of his historic campaign filled with records. He was nearly unanimously voted as the Pacific League MVP, with the only other first -place ballot going to a fellow Fighter and ordinary lefty reliever Naoki Miyanishi. A mere four years into his career, he had conquered the highest level of baseball in his country.

Ohtani didn’t stop wowing people even in the off-season. He took part in an exhibition series where Team Japan faced “national teams” from Mexico and The Netherlands. In the final game of the four-game affair, the wunderkind hit an absolute rocket into the artificial sky at the Tokyo Dome. It would have kept going if not for the glass fibered roof, into which the ball disappeared. Ultimately, it was ruled a double. The collective awe and the confusion that followed are hard to forget for anyone in the crowd. Though, for Ohtani, it must have been just another highlight reel in what would soon become an international superstardom.