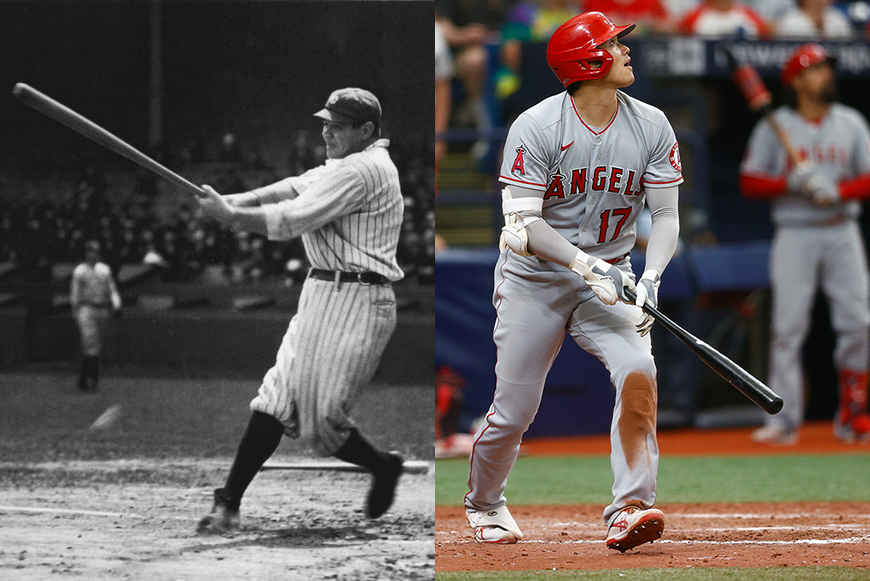 The delight of Shohei Ohtani is not just that he’s both a good pitcher and a good hitter, it’s that he does them both, period. Many of us have never seen this at the major league level. Ignoring the random position player pitching or pitcher in the outfield, the most-cited recent two-way player was Brooks Kieschnick with the Brewers. In 2003, he appeared in 42 games in relief, started four games at DH and three in left. That’s it. Prior to that, he hit .220/.297/.405 in 192 plate appearances over four seasons exclusively as a position player. In 2004, he pitched 32 games exclusively as a reliever.

But it wasn’t always like this. Throughout history, players who appeared regularly on the mound and in the field were rare, but not unheard of. It’s not that there’s never been a player like Ohtani, it’s that most of us haven’t seen one in living memory. But they’ve occurred in the past. Who were the best?

Then I needed to rank the players. I wanted to use a measure of value, but since we do not calculate WARP for hitters prior to 1921 or for pitchers prior to 1950, that wasn’t an option. I used Baseball-Reference’s WAR, partly because I’m using the B-Ref list, and partly because B-Ref has helpfully calculated WAR for the Negro Leagues.

Using a player’s WAR as a hitter and WAR as a pitcher requires some adjustment. The no. 1 player if you sum the two, unsurprisingly, is Babe Ruth: 162.7 hitter WAR, 20.4 pitcher WAR. The average of those two is 91.6. But it’s lopsided. Ruth derived far more value as a hitter than as a pitcher. A two-way player should be good, or spend a fair amount of time, at both. So instead of using arithmetic mean, (a + b) / 2, I used geometric mean, (a x b)^½. Geometric mean takes proportion into account. If a player has 99 WAR as a hitter and 1 WAR as a pitcher, the arithmetic mean, 50, is twice as high as a player who has 25 WAR as both. The geometric mean for the well-balanced latter player, though, is still 25. The good-only-as-a-hitter former player’s is just 10.

By this method, here are the ten greatest two-way players of all time.

So, Walters. He broke into the majors as an infielder with the Braves in 1931 and wound up with Phillies. Possessing a strong third baseman’s arm, Phillies management urged him to try pitching. He relieved one game late in the season and started the Phillies’ final game, giving up three runs over five innings. The next year he compiled a 4.17 ERA—this was the lively ball era, so that was good—over 151 innings while starting just five games in the field. And that was pretty much it for his time as a position player; he appeared in only ten more games in the field over the next 15 years. He became one of the National League’s best pitchers, ranking 81st among starting pitchers all time by JAWS. He had a 3.30 career ERA (116 ERA+) but had just a 72 OPS+ as a position player, 67 once he turned to pitching.

I’m sure you noticed that most of these guys were basically position players who wound up being exclusively pitchers (Walters, Smith) or pitchers who wound up being exclusively position players (Ruth, Wood, Ankiel). Their years doing both were very limited (none in the case of Ankiel). Only the four Negro Leaguers had multiple years as regular players on the mound and in the field. We may be witnessing the fifth.

You need to be logged in to comment. Login or Subscribe
mark warmuth
No mention of Bob Lemon?
Reply to mark
Rob Mains
He's on the line, Mark. He came up as a position player, playing 4 innings at third in 1941-42. His only year as a two-way player was his first season back from the war, 1946, and he started only 12 games in the OF. But that was it, and that happened to be one of his worst years at the plate (.180/.240/.247) and he was no better when he played in the field (.194/.286/.226). So it'd be a stretch, though I could see a case for him supplanting Ankiel.
Reply to Rob
Tieran
This feels like Guy Hecker slander.
Reply to Tieran
Rob Mains
Tieran, in 1884 he got 15.5 WAR by going 52-20 with a 1.80 ERA over 670 2/3 innings. Sure, he also played five games in the outfield, but what are we supposed to make of those pitching numbers? Nineteenth century baseball was a different sport.
Reply to Rob
Patrick Cooleybeck
Wondering how much Smoky Joe Wood missed the cut here. (Incidentally, the pitcher with the most similar career numbers to Wood's is...Bullet Rogan)
Reply to Patrick
Patrick Cooleybeck
...and he's right there at #4. My bad.
Reply to Patrick
Rob Mains
No prob, Patrick, I know him as Smoky Joe as well. Somewhere along the way he got known as just plain Joe.
Reply to Rob
Randall Larkin
I calculate Johnny Cooney at 7.49, but unfortunately he only had 159 games pitched so did not make the Baseball-Reference list.
Reply to Randall
Rob Mains
Excellent catch, Randall! I'd never heard of him. He was legitimately two-way. (btw as of today Ohtani has moved past Radcliffe)
Reply to Rob