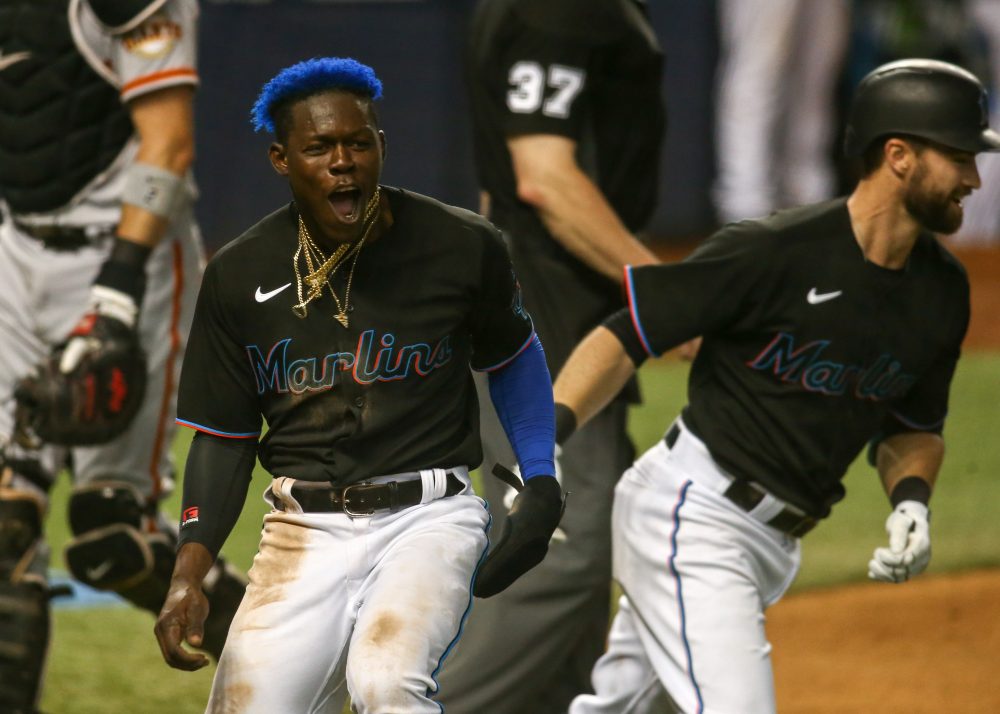 The sound of Jazz is filling ballparks again. There’s a lot of history between baseball and jazz and I’m excited to add another note to the song.

There’s constant conversation about whether or not “baseball culture” is fun. Most times it isn’t. Typically, when we are discussing the culture surrounding MLB we’re talking about how conservative and stodgy it tends to be. Enter Jasrado Prince Hermis Arrington Chisholm Jr. With blue hair and aggressive baserunning, the Bahamian ballplayer has taken baseball circles by storm. Jazz Chisholm, Jr. has us asking “is baseball fun?” And to some extent, “why isn’t it always this way?” He’s provocative. He gets the people going.

At the end of spring training, Marlins’ General Manager Kim Ng announced that Chisholm would be the second baseman on Opening Day. The younger of the competitors for the job, he really created a buzz during his time in Grapefruit League play. Within the first couple of weeks of the 2021 season he’s stolen second on a pickoff, then stole third right after. He recently hit a homerun off a 100 mph pitch from Jacob deGrom. Yep, that Jacob deGrom. Chisholm ranks second among qualified rookies across the league with an OPS of 1.126, second to Yermín Mercedes of the Chicago White Sox. With a slash line of .325/.451/.675 and his unrivaled enthusiasm for the game, Jazz Chisholm has reignited the duet between baseball and jazz.

What Chisholm brings to the game is much like the backbeat. The groove. The part you feel. For the uninitiated, the backbeat, created by New Orleans musician Earl Palmer, is what we know to be the two and the four. Popular in Black and African-American music like jazz, the backbeat, according to Ethan Hein a founding member of the NYU Music Experience Design Lab, is “used to create rhythmic tension and anticipation and elicits more active and participatory listening;” exactly what Chisholm offers fans every time he steps on the field.

Recently the league announced new rule changes that they would be experimenting with in the minor leagues including, essentially, getting rid of the shift as well as a step-off rule meant to encourage more steals. And this season, they’ve implemented the runner on second rule in extras, much to the chagrin of fans. It’s a rule that, even if it works in your team’s favor, doesn’t quite feel like real baseball.

In litigating every single nuance in the game, the art is lost. The natural rhythm is suppressed. In the process of working on this piece, Craig Goldstein mentioned a George Carlin quote about blues that I think can also be applied to jazz: “It’s not enough to know which notes to play, but why they need to be played.” Baseball needs not only to know which notes to play, but why they’re important to play, too. Sure, the game is long and that’s a real turnoff for some. Commissioner Rob Manfred has sort of made it his personal mission to alter the game in hopes to grab some new, untapped audience. But maybe jazz ball is the answer.

The first connection between the two happened in 1912. Ben Henderson, a pitcher for the Portland Beavers, invented a new pitch he named his “jazz ball”. It was a curveball that he told reporters he called jazz because it wobbled and hitters wouldn’t be able to do anything with it. As noted in my first entry “Baseball and Jazz:”

In “The Mysterious Origins of Jazz,” Christian Blauvelt considers the etymological mystery of the word. The New Orleans Times-Picayune first referred  to “jas bands” in November 1916. This spelling indicates that perhaps ‘jasm,’—an African-American slang term dating  back to 1860’s meaning ‘vim’ or ‘energy’—is where the word jazz is derived.

As Major League Baseball looks to establish a new cadence within Black communities, perhaps it can look to Jazz to lead the way. A new kind kind of Jazz Ball, with the energy, style, fluidity, and aesthetic appeal that Chisholm plays with.

Jazz embodies all of the things we love about the sport, here and now, in the present. Jazz Ball 2.0 is in a lot of ways baseball 1.0, and returning to its roots might do it some good with fans. Letting the game evolve naturally might strike all the right chords. The saying goes, “friends don’t let friends clap on the one and the three” and Major League Baseball needs to find its rhythm. No one cares how long a song is as long as it’s got a good groove. The backbeat is the soul of it all. It’s there on its own. You just have to get out of the way.

As A Tribe Called Quest once told us, “we’ve got the jazz.” Let it (and him) just play.

You need to be logged in to comment. Login or Subscribe
timjackson
Loved this from the title to the last word
Reply to timjackson
paddyo
Love the article. I once attended a playoff game at Stadio Latinoamericano in Havana. It seemed like every player was playing with great skill and
even greater enthusiasm. If anything, the fans were more "jazzed"
than the players. What a great day that was !

Pat O'Day
Reply to paddyo
Chad Ronnander
Jazz Chisholm is cool. And your article is cool. And saying much more would be uncool.
Reply to Chad