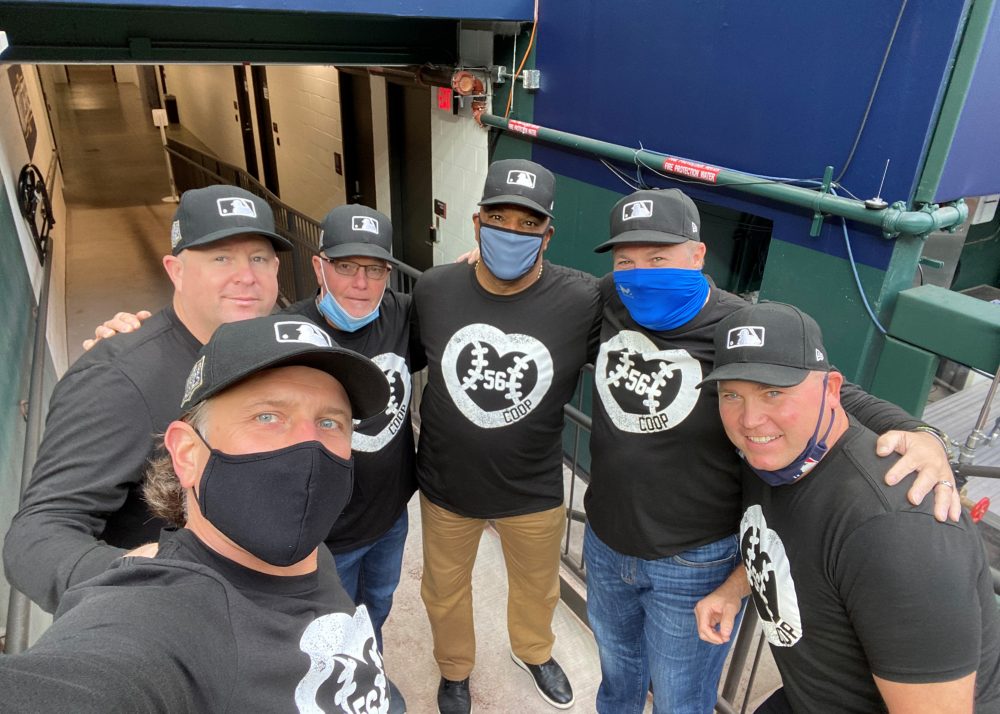 This article is brought to you by a partnership between Baseball Prospectus and the Pandemic Baseball Book Club, a collective of baseball authors focused on the principle of cooperation over competition. Check out their conversations about baseball books and much more at pbbclub.com, and on Twitter at @pandemicbaseba1.

Last year, 57 major league baseball players came down with COVID during the season, culminating with Justin Turner in the final game of the World Series.

Not a single umpire tested positive.

How that happened was thanks to a litany of safety protocols that have by and large gone unnoticed by the general public, few of which were easy but all of which worked—and some of which might lead to lasting changes.

Most of the new rules are familiar by now: social distancing, mask wearing, frequent washing of hands. Those were the simple ones. To minimize travel, umpires were divided into three regional groupings—East, Central and West, corresponding with baseball’s divisions—based on where they lived. A West Coast umpire did not travel further east than Houston.

In normal years, umpires rotate after a single series, usually three or four games, scrambling after the finale to make a commercial flight to their next assignment. In 2020, to minimize exposure, they stuck around for entire homestands. For shorter trips, umpires traveled by van, as a group, and for longer trips they hopped on team charters. For the first time, umpires’ rooms were booked for them in team hotels, with baseball personnel taking over dedicated floors to minimize interaction with other guests. “It was the easiest travel I have ever done in my entire baseball career,” said Chris Guccione, who over his 20 years as a big league ump had never been on a team airplane.

Of course, luxury travel during a pandemic is still far from normal, no aspect more so than dining. Restaurants were out of the question, and even room service was off-limits, as was picking up one’s own takeout. “We basically lived off of Uber Eats, GrubHub and Postmates,” said Guccione.

With a single positive COVID test able to wipe out an entire homestand or more, health updates were at a premium.

“Every morning when we woke up, we used an app called Edge10, which gave us 20 questions to answer,” said umpire Dan Iassogna, chair of a collaborative Health and Wellness Committee within Major League Baseball. “You’d take your temperature twice, and log that in. If there was anything abnormal, our medical director would call us immediately. When we got to the ballpark, we had another screening. They would take our temperature on non-testing days, when we weren’t doing our PCR [polymerase chain reaction] testing. Finally, we were allowed to go into the ballpark and go to work.” Testing days for umpires were Monday, Wednesday, Friday and Saturday, same as the players.

Umpire facilities varied at different ballparks. Those with small dressing quarters provided conference rooms or auxiliary locker rooms to insure adequate spacing. At Fenway Park, they installed full-size soda machines in front of every other locker as a physical barrier between occupants. Umpire crews would shower sequentially after games, with the stall cleaned and disinfected between each use. Gone was the communal space typically used to relax during downtime. “I don’t think we touched a deck of cards the entire year,” said Guccione.

Because work assignments were arranged regionally, week-long postings to work at the Replay Operations Center in New York City were reserved for those who were assigned to the East and sometimes Central divisions. Because that work is performed indoors, protocols were developed to maximize distance and safety, starting with mandatory N-95 masks in the building at all times. Instead of multiple people—umpires, technicians and directors—gathered in a single space, umpires were sequestered into individual conference rooms at the new 1271 Sixth Ave. location.

“Normally with a replay, a director would come over and say, ‘OK, give him camera two, give him camera three, give him low home, high home …’ and you’d walk through it that way,” said Iassogna. “[In 2020] you would put the headsets on and talk to the crew on the field. Then you’d hit another button on your headset, and now you’re talking to the technician, you’re talking to the director. ‘OK, here’s your angle.’ It took a little getting used to, but it worked. None of the umpires got sick.”

Not all 76 umpires on the major-league staff worked the season. A dozen opted out, citing advanced age or underlying health conditions. Two had spouses in chemotherapy. That, combined with a number of umpires missing significant time due to injury, opened opportunities for a record 18 major league umpiring debuts—a detail with its own considerations and consequences.

With no minor league baseball being played, each team fielded a 60-player pool, plus an additional 30-plus emergency players, from which to draw for their regular roster. The sites where they worked out were also home to a considerable number of Triple-A umpires—12 first-line designees and 19 others—who, like the players alongside them, were hoping for a call-up. Circumstances pushed the typical timeline, with some umpires gaining major league eligibility before they’d even worked big league spring training or the Arizona Fall League. For the first time, umpires wore uniform numbers with triple digits. All 31 of the designated minor league umps saw major-league action in 2020.

On multiple occasions, Iassogna had two Triple-A umpires on his crew, and once—the first game of a Sept. 8 doubleheader in Philadelphia—he worked with three Triple-A umpires. “Those guys did a fantastic job for never having worked in the big leagues before,” he said. “You could hang a star on them. To do what they did, without seeing a big-league pitch before … I’m unbelievably proud of those guys.” 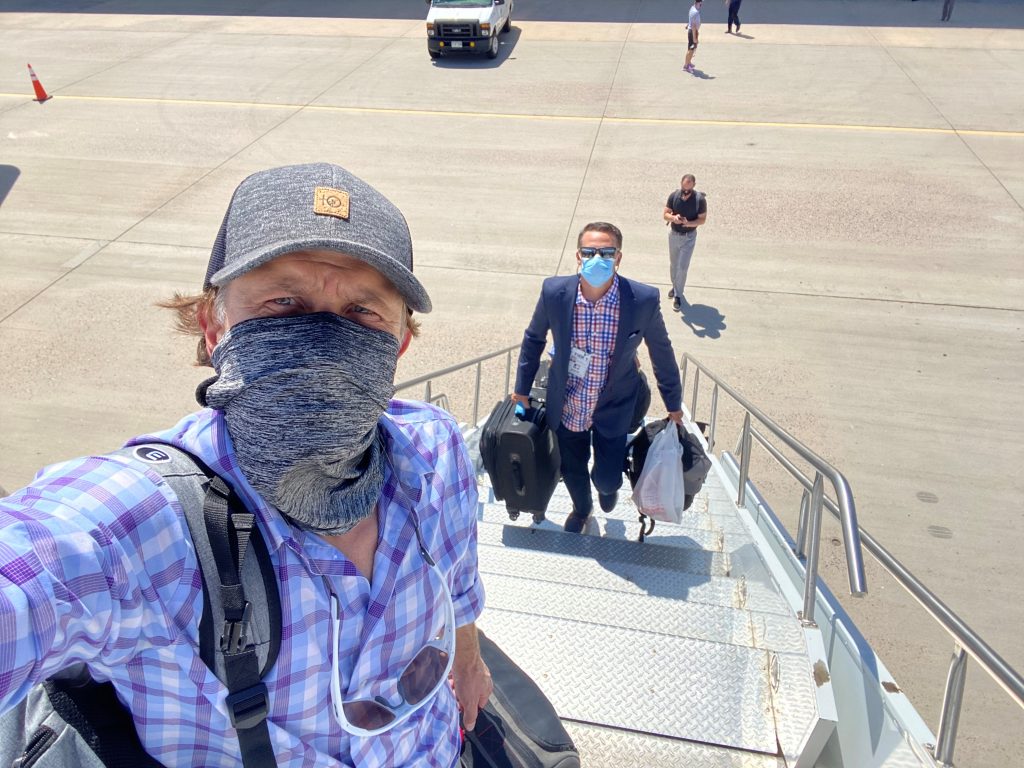 Chris Guccione in Denver boarding a charter flight with the Rockies heading to Texas for the Spring 2.0 exhibition games. Photo credit: Chris Guccione.

The final three rounds of the expanded 16-team 2020 postseason were held at neutral-site “bubble” locations, with daily COVID-19 testing for all participants, including umpires. Quarantine restricted their actions to hotels and ballparks. Even players who lived in those cities were required to stay in designated hotels.

During the World Series, in addition to the seven regular field umpires (six who worked the game and one who stayed in the locker room in case of injury), four reserve umps—Iassogna, Ted Barrett, Chris Conroy and Jim Reynolds—remained at the hotel. They did not mix with the others, effectively creating a bubble within the bubble.

“We’re used to a nomadic lifestyle, but there’s still the intensity of doing the job,” said Iassogna. “You have to be able to have some downtime to decompress, and the only guys you can do that with are the guys who know what you’re going through—your crew.”

Even in normal years umpires are separated from players and support staff, with their given crew as a primary source of companionship. Even that much was waylaid by the pandemic. “It was depressing a little bit,” said Barrett. “When we went to Seattle and San Francisco, these vibrant cities were boarded up with nowhere to go.” Crews frequently ended up divided and alone in their hotel rooms for the duration of a trip. They could go for socially distanced walks together, but indoor activity was rare. “If anybody had a balcony on their room, that was golden,” said Iassogna. “You could have two people in the room and two people out on the balcony. You need that human interaction.”

Underlying all of it was COVID concern. Every umpire was aware of their predecessor—major-league umpire Silk O’Loughlin—who died during the pandemic of 1918. Barrett has a doctorate from Trinity University, and wrote a dissertation detailing the often private struggles umpires face amid their work environment. The season was a challenge, he said, but any consideration of breaking protocols in the name of mental health was subsumed by a single thought: “We don’t want to be the ones that shut this down.” With only 60 games instead of 162, the light at the end of the tunnel didn’t seem so distant.

At Barrett’s recommendation, MLB hired Dr. Joel Fish, who had done similar work for the NBA, to present health-and-safety seminars for umpires and related staff. 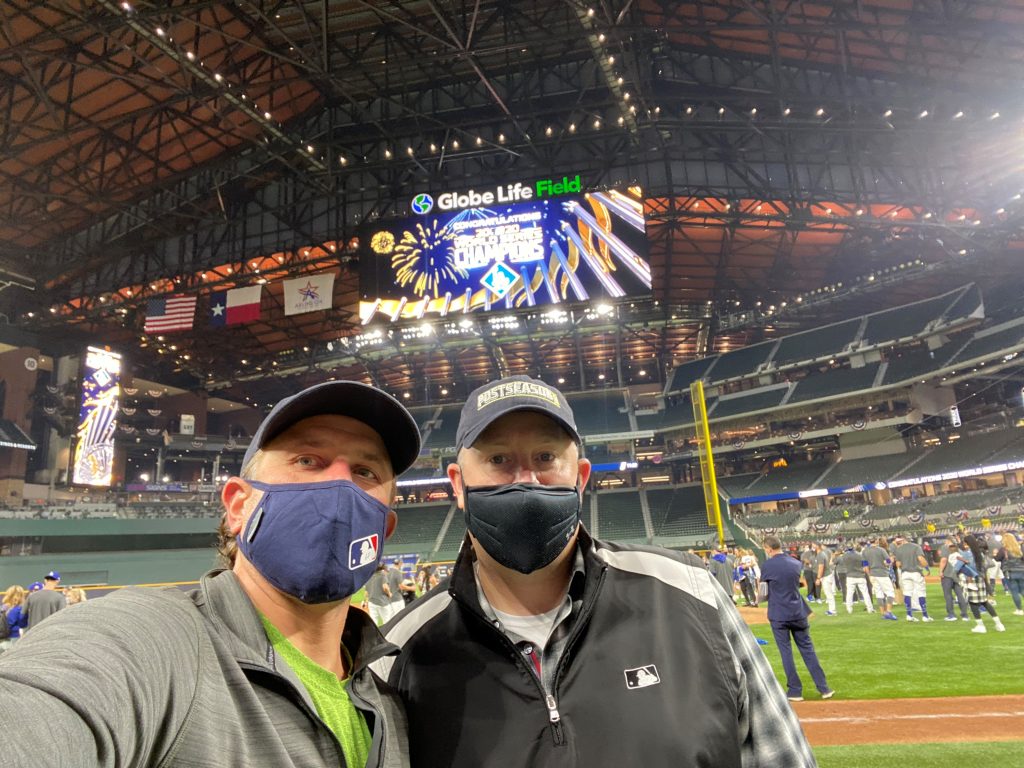 Chris Guccione on the left and Todd Tichenor on the right after Game Six of the World Series. Photo credit: Chris Guccione.

Even at a distance, in some ways the umpiring community grew closer than ever. With prorated salaries, most umpires earned considerably less than usual, so the union created a financial pool to help those who missed out on postseason assignments, building uniformity across seasonal wages independent of whether one worked the playoffs. “I was proud of our guys,” said Barrett. “We came together to help the young guys out.”

The lack of a positive COVID test among umpires built confidence among their ranks about ongoing protocols. The next phase includes assessing whether any of those changes—allowing umpires onto team charters, keeping them in the same city for entire homestands, integrating postseason alternates—might endure past the pandemic.

“Baseball did an incredible job,” said Guccione. “I can’t imagine the brainwork involved in trying to organize all this. There were so many moving parts. We wanted to follow the rules and take it seriously. We didn’t want to be part of a possible problem. At first, I thought it was going to be hard, but honestly, it was a fun year. We had a great time, even with all this going on.”