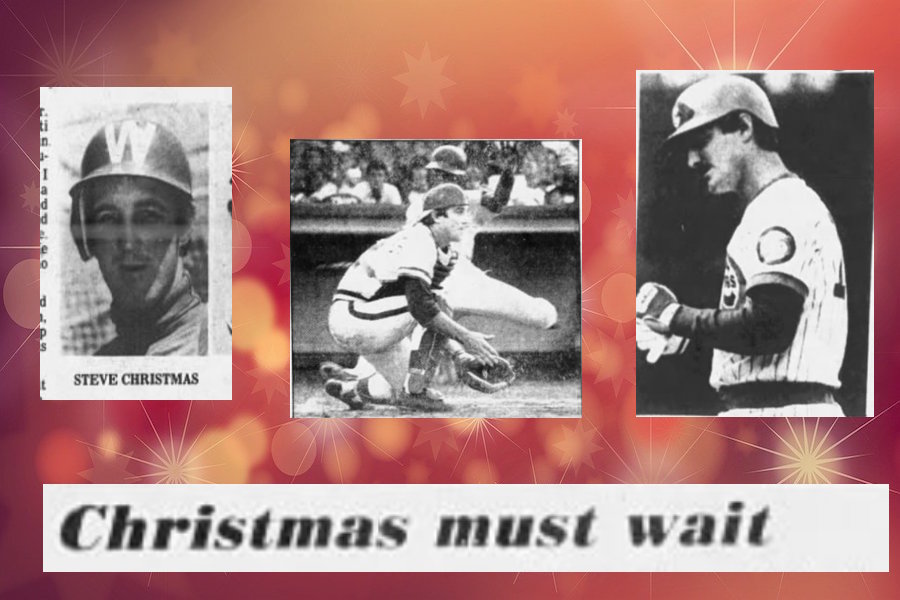 The Steve Christmas story is dangerously close to being a vintage Disney animated film come to life; a product of the algorithm that spits out the scripts for the 42 Hallmark Channel holiday flicks every year. Enough details get changed to make it believable and prove his career started and ended in the real world, on Earth Prime.

Stephen Randall Christmas was born in December. December 9th. He was born in Orlando, which is within 30 miles of Christmas, Fla., but is not quite Christmas, Fla. He was rejected repeatedly, languished in the minors for longer than most people could take, yet persevered. But you probably never heard of him and might still think I am making this guy up, ironically making the tale credible.

Christmas’ parents divorced when Steve was 11. Not surprisingly, Steve would later admit that was a “very hard time” in his life.  His father was the one who left the home, and the one who cultivated Steve’s love of watching and playing sports. Steve attended Colonial High School in Orlando, where Hersh Freeman, a Red Sox, Red Stockings, and Cubs pitcher in the 1950s, coached Christmas. Freeman, Christmas said, “became like a father” to him.

Christmas for awhile believed he could earn a college football scholarship. The ambidextrous high schooler threw for more than 2,000 yards and 26 touchdowns left-handed for the Colonial Grenadiers. The 6-foot-0 Christmas was told by scouts he was too slow and too short to continue playing. Adding injury to insult to the second shortcoming was the fact that he was already given the nickname “Tree.”

He had more success playing third base and pitching (right-handed, hitting left-handed) under Freeman. The Minnesota Twins drafted him in the 33rd round of the 1975 draft. The Twins just happened to be Christmas’ favorite team growing up — Tinker Field in Downtown Orlando is where the Washington Senators/Twins met up every spring while Steve was a little Steven. His favorite was Harmon Killebrew.

Christmas turned the Twins down. “They wanted me to sign for a $2,500 bonus and $500 a month,” he said. “I wanted more than that.” Christmas also didn’t much care for a comment a scout made. “Some guy from the Twins told me ‘We don’t think you can play in the big leagues.’ … Yeah, he actually said that.”

Oh boy. Do you think the Twins are going to regret that? If this were a movie, they would totally regret that.

Christmas moved on to Oklahoma City Southwestern College and Southwestern Oklahoma State University before a 1977 tryout with the Cincinnati Reds, set up by Freeman. He impressed enough to earn a contract for a non-insulting amount of money. You know there was a new obstacle: The Reds wanted to convert him into a catcher. Christmas never caught before. And the Reds still employed Johnny Bench.

Tree continued to rake and learned the tools of ignorance quickly. The Tampa Times in July 1979 wrote that he became an A+ student at the catching position “in an alarmingly short period of time.” Christmas led the Florida State League in hitting for most of the ‘79 season, and was thought to be “one of the most popular” players on the Tampa Tarpons squad, although he received plenty of heckles, some decent, most awful. A spectator once sang, “Deck . . . the halls . . . with boughs of holly . . . Fa-la-la-la-la . . . la-la-la-la”. Others referred to him as “Steve Thanksgiving,” “Steve Halloween,” and on one March 17th, “Steve St. Patrick’s Day.” Once he stepped out of the box and a fan yelled “We gonna wait until Christmas?”

He finally found his way to the Double-A Waterbury (Connecticut) Reds for a full season in 1981. His manager said he loved him.

He reached Triple-A in 1982, smacking two game-winning home runs in four days for Indianapolis. When Christmas homered off of Dave Schuler’s 12th offering of the at-bat, he pointed at his mother Shirley and stepfather Leon Midgette in the stands and threw his arms up in the air. Shirley and Leon had not seen Steve play in over two years. Christmas was acting with childish glee while seemingly feeling like time was running out, both for his team’s playoff chances and for making the big leagues. “We’ve got to drive now,” the then 24-year-old said. “Time is running out. We can’t wait until tomorrow.”

The 1983 season got off to a bad start. He hit .400 during spring training but was assigned to Triple-A again. According to Christmas, the usually mellow guy “sort of went crazy” and yelled at manager Russ Nixon and GM Dick Wagner. They punished him by loaning him to the Astros’ Triple-A affiliate in Tucson. He thought about quitting. “You keep thinking, ‘Why me?’ Or, ‘Why not me?’ And you think about putting a wife and daughter through the life of a gypsy.”

Steve hung in there and was returned to the Reds’ minor league chain, but returned as the backup catcher in Indy. Christmas was receiving so little playing time he asked in late June to be demoted back down to Double-A Waterbury. In his first start back in Connecticut, he fractured his thumb off a foul ball and missed a month. His August must have been impressive, and some higher-ups figured he had learned some lesson, because on September 1st he became a Cincinnati Red.

Christmas made his major league debut as a pinch hitter, facing Cubs closer Lee Smith. He struck out. Steve didn’t pretend to act like he wasn’t impressed and probably overwhelmed.

“Hard? Yeah those pitchers were real hard. He blew the ball by me, and I ain’t never seen anything like ‘em.” Regarding Smith, Christmas said he looked “extra real big.”

On November 22nd, Christmas was traded to the White Sox. The Rock Island Argus in Illinois went with this headline:

After three pinch hitting appearances in June 1984, Christmas latched on to the White Sox as part of their expanded roster in September. On September 19th, with two outs in the top of the seventh inning, Christmas pinch hit for starting catcher Marc Hill. It was his 25th career plate appearance in the bigs. Greg Walker was on second. Roy Smalley was on first, after he was intentionally walked. The lack of respect for the rookie, incredible. He worked the count full. Mike Smithson threw a slider, high and inside. Mike Smithson should not have thrown a slider high and inside. Steve Christmas hit his first, and as it turned out, only, big league home run.

My Christmas wish this year was to get to tell you he hit the dinger against the Minnesota Twins without lying.

“We figured the guy got here on fastballs,” Twins catcher Tim Laudner told The Star-Tribune. “So we tried to stay away from anything he could get the head of his bat on. But that was the ballgame.”

Christmas’ manager, a guy I would not say is associated with loving to see passion on the field, liked what he saw. “There are days you work at this game and there are days that you play it,” Tony LaRussa said. “In Tree’s mind, he was playing today … Did you see how happy he was?

“A guy gets his first major league home run and it’s the game-winner. I’ve never seen a guy as happy as that. It shows you how much fun baseball can be.”

Twins manager Billy Gardner continued Minnesota’s War on Christmas. “We gave Christmas a gift, didn’t we – his first major-league home run. When I saw that ball go up, I thought it was a pop fly.”

The following January, Steve Christmas had a mustache to show that time had passed, and more to say about the home run against the team he grew up idolizing. “I felt pretty good. It seemed at that one moment, all the hard work was worth it – all the time in the minor leagues.”

The White Sox kept him in Triple-A for all of 1985, so Christmas declined their offer to re-sign him. The other Chicago club picked him up for 1986. He replaced the injured Jody Davis behind the dish on April 26th. In a 4-2 loss, Christmas dropped a throw from the outfield allowing Tim Raines to score. The Wrigley Field faithful jeered him. The next day he laced a pinch-hit, game-winning, two-run double off of Jeff Reardon to win back Cubs fans. Harry Caray interviewed him after the game. He won himself a 4-inch TV. Christmas got the start at first base the day after that in San Diego. Then in Los Angeles, he heard the “pop” noise from his arm an athlete never ever wants to hear making a throw to second during infield practice. Then he met Dr. Frank Jobe. Steve Christmas would never play in a major league game again.

He lost out on a potential roster spot with the 1987 Cubs to rookie Damon Berryhill and was designated for assignment. By Christmas of that year, he was referred to in the past tense in a Christmas-themed quiz, like he had retired a long time ago.

Earlier in the 1980s, there was a professional athlete named Steve Christmas. Name his sport, team and position.

Quiz answer: Steve Christmas was a baseball catcher who made it to the major leagues in 1983 with the Cincinnati Reds.

And that is the story of Steve Christmas. I have no idea what happened to him after March 28, 1987. I kind I like it that way. I could decide to give him a happy ending. I could decide after 11 seasons of pro ball he walked away to spend more time with his wife and their daughter, and when she turned 11, her father was still a part of her life, and she was happy about it, even though he asks at least twice a week, “Did I ever tell you about the time I really stuck it to the Twins?”

You need to be logged in to comment. Login or Subscribe
Rick Lopez
Let's hear it for newspapers.com, every researcher's friend! This was great... :-)
Reply to Rick
Roger Cormier
Hear hear
Reply to Roger
Eric Naftaly
Since Marc Hall died in 1915, presumably that was Marc Hill hat Christmas batted for.
Reply to Eric
Roger Cormier
You presume correct. Thank you Eric.
Reply to Roger