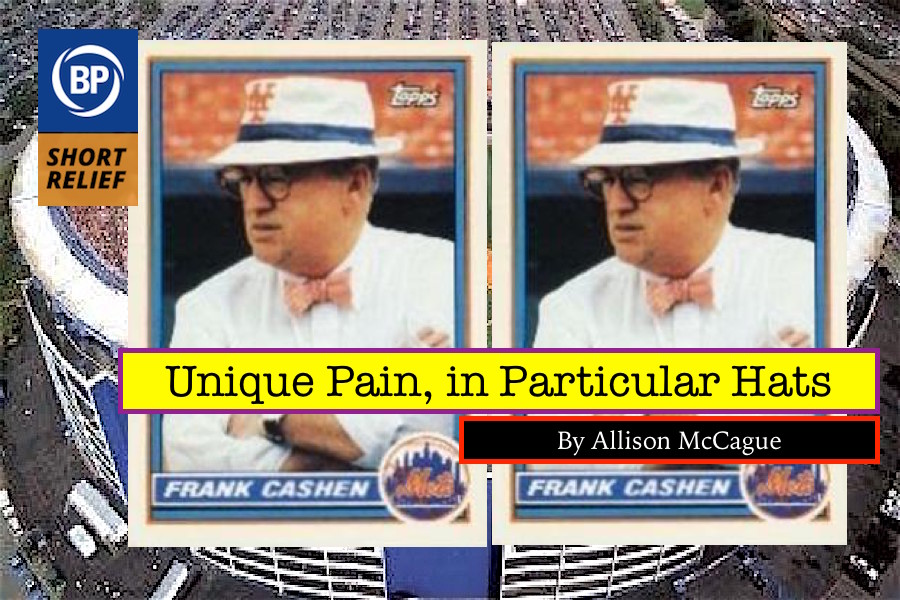 For a large chunk of my childhood, I was known simply as “the Mets fan” because I was always wearing Mets apparel whenever I could. In high school, I wore my Carlos Beltrán shirsey so often to soccer practice that my Yankees fan coach started calling me “Beltrán.” It stuck. 15 is still my jersey number to this day.

A nickname and permanent favorite number aren’t the only advantages to being “the Mets fan,” though. I also wore my Mets cap everywhere I went. I wasn’t allowed to wear it in school, but any time you saw me outside of school, I donned my cap, tilted ever so slightly to the side because my head was so tiny. One day, my dad asked me to accompany him to the jewelry store to help him pick out a gift for my mom’s birthday, ignorant as he was about all things shiny and jewel-encrusted. As a matter of routine, I popped my Mets cap on my head and walked out the door. We were waiting in line at the store, a very nice pearl necklace picked out, when I heard a quiet voice behind me, “A Mets fan, huh?”

“Want to see something cool?”

I nodded. Suddenly, my eyes grew wide as I stared at the comically large ring in his hand. A 1986 World Series ring.

I blurted out the words because I didn’t know how to say it tactfully. “Who…are you?”

“Frank Cashen is my dad.”

It turns out Frank Cashen’s son lived one town over from me. And he happened to need his father’s ring repaired.

That fortunate happenstance wasn’t the last time my cap served me well. After I moved away from the New York metropolitan area, encountering other Mets fans was a much rarer occurrence, so it was always fun when I would get a hearty “Let’s go Mets!” and a high five on the street. During the 2015 NLDS, I was at a scientific conference and steadfastly wore my hat as an accessory to my business attire every day. The morning of Game 1 of the NLCS, I participated in the Baltimore Running Festival—you guessed it, sporting my hat. During a particular tough uphill stretch of the race, I happened to spot in my peripheral vision a woman in the crowd flanking the course wearing a Cubs hat. We locked eyes. She did the playful hand gesture where you point your index and middle fingers at your own eyes and then point at the other person. “I’m watching you. I see you, temporary enemy.”

“I can’t let her see me walk,” I thought to myself. “How humiliating would that be?” I willed my exhausted body to keep moving up that hill. I ran my best time that day. And the Mets beat the Cubs.

When I learned of Frank Cashen’s death in 2014, I was struck by an unexpected sadness. At the time I was living in Baltimore, where Cashen made his name. The memory of holding his World Series ring came rushing back to me—along with the epilogue to the story, which is perhaps even funnier. About a week after I had my chance run-in with Cashen the younger, I was eating with my parents at our local diner. Of course, I had my hat on.

From across the room someone shouted, “Hey, it’s my Mets fan friend!” A familiar face smiled and waved at me from a booth not too far away.

The small, serendipitous moments when you connect with people who love the same thing that you love outside of the context of the ballpark have a unique beauty to them. Thanks to modern technology, we live in a world where we are more connected than ever. Yet, we’ve siloed ourselves in a way that is uniquely isolating; real, honest to goodness, face-to-face moments of connection between strangers are so rare. Even something as small as “Let’s go Mets!” and a high five is meaningful because, in a passing moment, I’ve shared something of myself with that person—something that is deeply important to me. And I leave the interaction knowing that, on some level, it’s important to them too.

And that’s why I’m fine with being “the Mets fan.” 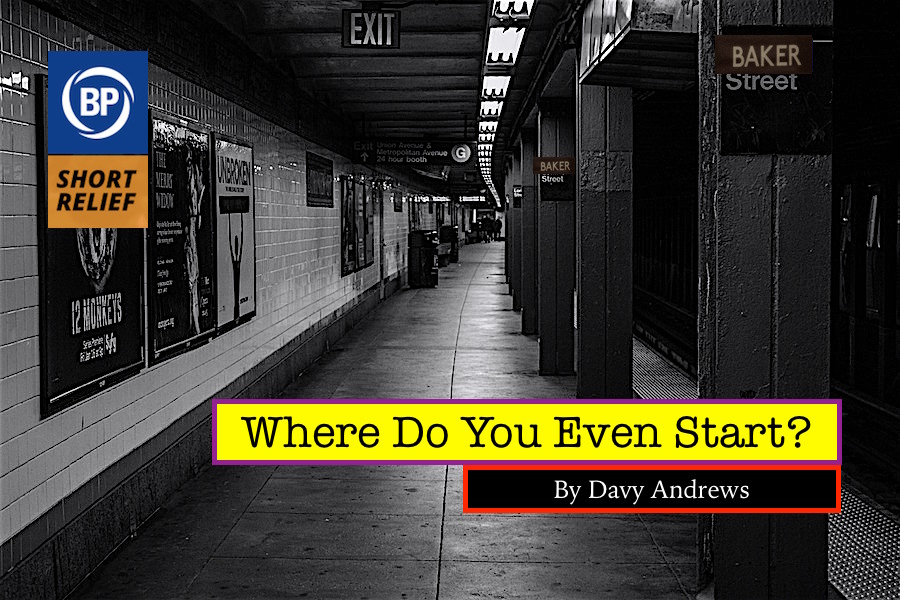 Here’s a fact: Every time it has ever felt like the world was ending, the world did not, in fact, end. The world has never ended. It is still spinning. That should be comforting. The doomsayers, the Chicken Littles, the Reasonabilists — they’re all batting zero.

That’s not to say that things can’t get any worse. Things can always get worse. Take any situation, and then add a guy playing the saxophone. Boom. Now it’s worse. It’s that easy.

When I first moved to New York and was still learning its byzantine transit system, I spent a lot of my time stranded on a subway platform, waiting for a train that might or might not decide to exist. During those eternities I’d sometimes catch myself looking around the station and trying to figure out the best way to start cleaning it. It wasn’t intentional. It’s just that the stations are so incredibly dirty that you can’t help but notice. I’d realize that I had been standing there for ten minutes, thinking, It would really be best to power wash the floor and get rid of the million black circles of gum. But that doesn’t make sense because once you scraped all the flaking paint off the ceiling and redid it, you’d have to power wash the floor all over again.

Then I would see a rat wandering around the tracks. I would think, Oh my God, there’s a rat. I had literally never seen a rat before I moved to this city. Is anyone going to do anything about the rat? Is everyone in New York City just totally fine with rats? The point is, I could never actually decide. Literally every single thing was dirty. I could never figure out where you would even start. (That is, unless there was a guy playing the saxophone. In that case, obviously, you would start by getting a broom and shooing away the guy playing the saxophone.)

I’ve been sick at home for the past several days, and in my boredom I took in entirely too much baseball news — more than I normally take in, more than is healthy — and it feels a little bit like the world is ending. I don’t want to get into specifics, but I will say that I think minor league baseball is good. I think that trying to win baseball games is better than pretending to try to win baseball games. I think hitting a home run should require, you know, hitting the ball hard. I think that baseball stadiums should, whenever possible, not be allowed to catch fire. For those and other reasons, the last few days have been a bit saddening.

More and more I think of baseball as something that needs to be fixed, something untrustworthy, something seemingly intent on being the worst version of itself. But the most saddening thing of all is that I’m starting to feel like I did all those years ago, waiting for a train that was never going to come, wondering, Where would you even start? 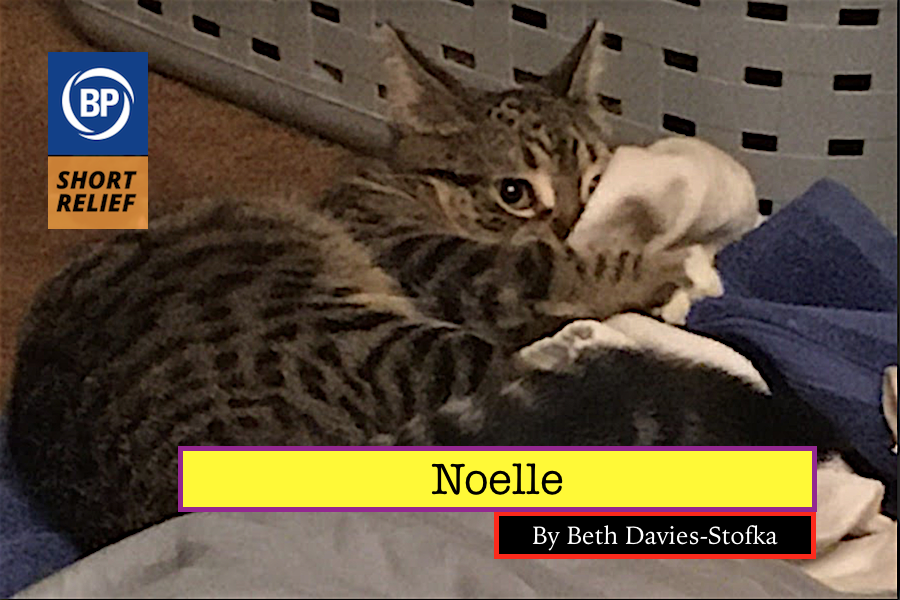 When I think of Christmas, I tend to resort to clichés, like Santa, lists, presents, grinches, and a passel of feel-good stories. Friends send photos of irreverent nativity scenes featuring BB-8 and Iron Man. I’m shut down with a nasty bug, bored, so I Googled “baseball Christmas” and found three actual articles in nine pages of ads. There were some pretty great gift ideas for fans of the game but gifts are not my thing. The holidays are hard, full of bad memories, difficult to navigate. I like to make new memories, wiping away the bad. Enter Christmas kitty.

She came home on December 7th and has made her nest behind the sofa in my office. When she comes out, she’s a classic scaredy-cat, nearly every muscle in her body trained to escape. Taut, she seems to float, her little white mittens barely touching the floor. I’ve seen her jump twice, and she is graceful. But mostly I’ve seen her tail, and brief glimpses of her little back feet as they scramble behind the sofa.

I’ve established an evening routine. Somewhere between 5:00 and 5:30, I put treats at opposite corners of my office, and then I sit quietly in my office chair. She emerges timidly, tempted by freeze dried minnows. Literally, freeze dried minnows. I’m amazed that they don’t have looks of surprise on their tiny little minnow faces. They disgust me but she loves them, so tonight, I lay flat on the floor, right arm stretched out, freeze dried minnow in palm. She took her time approaching me, but she didn’t run too far away after grabbing it. She stayed where I could see her and she mewed, for the first time. I will give her these horrible little things every day for life, if she wants them.

We brought her home from the shelter because she was an orphan, huddled alone in the kitten room, grieving the death of her littermate. When our beloved Bonnie died during the playoffs in October, I knew we’d have a Christmas kitty. Bonnie’s litter box waited, clean and ready, on the back porch. The litter container sat on the edge of the downstairs bathtub. Bonnie’s box of toys sat on the living room floor, and the bed that she’d assembled with my worn and smelly socks stayed on the floor of my office. Enter the golden youngster that we named Noelle. We call her Ellie, the Invisible Kitten.

My dream is that she will emerge once and for all from her refuge as pitchers and catchers begin to report, and that by the time the first Spring Training games begin, she’ll be watching television with me. I’m planning to let her choose our favorite NL team for 2020, since that slot is currently unoccupied. I have no idea what thoughts lurk behind those gold-rimmed eyes, but we’ll learn. It’s only a matter of time.

You need to be logged in to comment. Login or Subscribe
Brady Lewis
NOELLE IS ADORABLE AND I LOVE NOELLE
Reply to Brady
beth davies-stofka
Brady, I heard Noelle playing with one of her toys behind the sofa and I told her softly, "See, Ellie? You already have a fan base." Oh, she has no idea the love that she has walked into. :))
Reply to beth