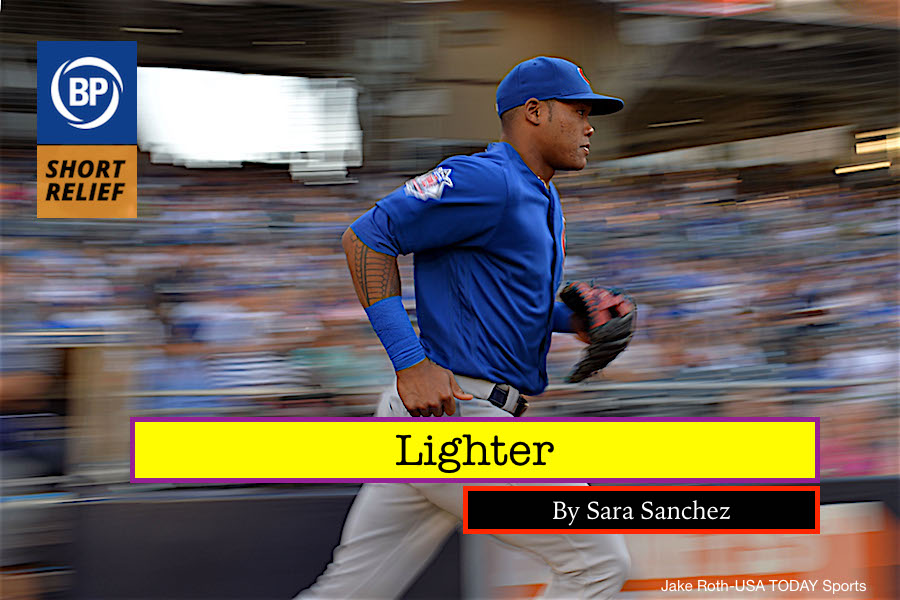 The non-tender deadline is surely stressful for players and agents, but it is not supposed to be an ordeal for fans. It is not supposed to be a day where I need to constantly check in with myself silently willing my hands to stop shaking. Baseball, for all it’s tense moments during games has generally been my refuge from anxiety.

But I was having a hard time communicating that to the anxious weight that took up residence in my chest Monday. It seemed to grow every time I hit refresh on Twitter. Anxiety and I have a long-term, if less than ideal, relationship. It ebbs and flows, sometimes overwhelming, sometimes manageable, but almost always present. I’ve lived with it long enough to have a long list of coping mechanisms – monitoring my breathing, focusing on specific colors, trying not to let my thoughts race too far ahead. The empirical knowledge that despite my body’s insistence to the contrary, panic attacks do pass and will not kill me has been particularly clutch.

All sorts of baseball stories seem to have gotten mixed up with real world anxiety recently and the Cubs have had more than their fair share. Watching and writing about baseball may have been my reprieve, but in the last few years amidst the tens of thousands of words I’ve written about Addison Russell’s suspension for domestic violence I’ve found myself dealing with a tremendous, and increasing, amount of anxiety as every Russell deadline and announcement unfolded.

I’ve had a relationship with the Chicago Cubs even longer than I’ve been consciously dealing with anxiety. So, on Monday I felt progressively worse as the non-tender deadline approached, until finally, at 5:47 pm Twitter began reporting that Russell had been non-tendered by my favorite team.

I’m under no delusions that this fixes anything. Russell’s actions that led to his suspension are still horrific, the Cubs response as a team feels a year too late, and MLB’s domestic violence policy still leaves a lot to be desired. But for one brief moment, as I felt some unexpected tears of relief fall at my desk, the weight on my chest lifted. 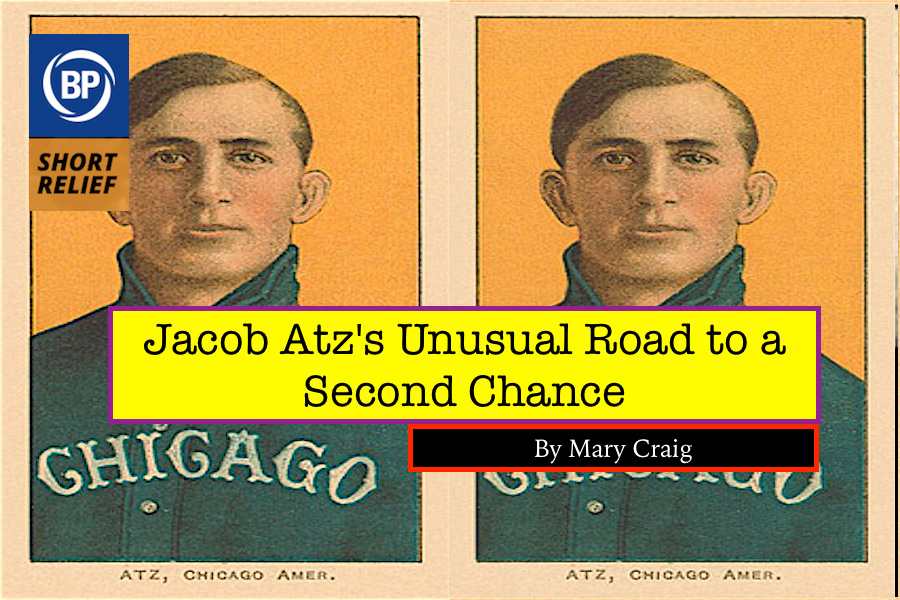 Jacob “John” Atz, a professional second baseman, first played for the Washington Senators in 1902 and then for the Chicago White Sox from 1907-1909, totalling a 4-year MLB career. Following his stint with the White Sox, he began managing in the minor leagues, accumulating 1,971 wins over 27 years become one of the winningest managers in minor league history. Doubtless there are many stories to tell within this career, but one of the most intriguing ones comes from his time in between his major league stints.

Following his release from the Senators, Atz auditioned for a place on the newly created Los Angeles Angels of the Pacific Coast League, easily securing the second base job. Over the next three seasons, Atz become one of the standouts on the team, using his major league experience to mentor his younger, less experienced teammates. Not much is known about PCL players’ performances during this time, but Atz played well enough to never have his place on the team questioned, and always took the field with the goal of returning to the majors.

However, when an earthquake struck San Francisco in 1906, destroying the city’s ballfields, the survival of the PCL was no sure thing. Many other teams in range of the earthquake received similar damage to their facilities, and though only a few weeks old, the 1906 season was put on hold. Unsure of their future with the PCL, many players attempted to find employment in other leagues, such as the Southern League. Jacob Atz was one such player.

He traveled to New Orleans, securing a position on the Pelicans, one of the Southern League’s premier teams. However, Atz soon ran into a roadblock. In order to be eligible to play for another league, Atz and his fellow defectors required PCL president, Eugene Bert’s written permission releasing them from their PCL team’s control. After Bert initially seemed unwilling to do such a thing, Atz filed a lawsuit in New Orleans, suing the PCL for $10,000 in damages for interfering with his constitutional freedom to choose his employment.

Nothing came of the lawsuit itself, of course, but the filing was enough for Bert to think better of pursuing a countersuit against Atz, and within several weeks of filing, Atz took the field for the Pelicans. His actions, likewise, enabled many other former PCLers to find other employment while the PCL attempted to rebuild itself. Now in this more notable league and on a more prominent team, it took less than a year for Atz to finally catch the interest of another major league team, this time the Chicago White Sox.

Needing a 5-year break, a devastating earthquake, and a lawsuit for this second chance means that the more unknown parts of Atz’s story are far from uninteresting. They also do not belong to Atz alone, but to a myriad of his fellow players, many of whom we might never come to know beyond their names. 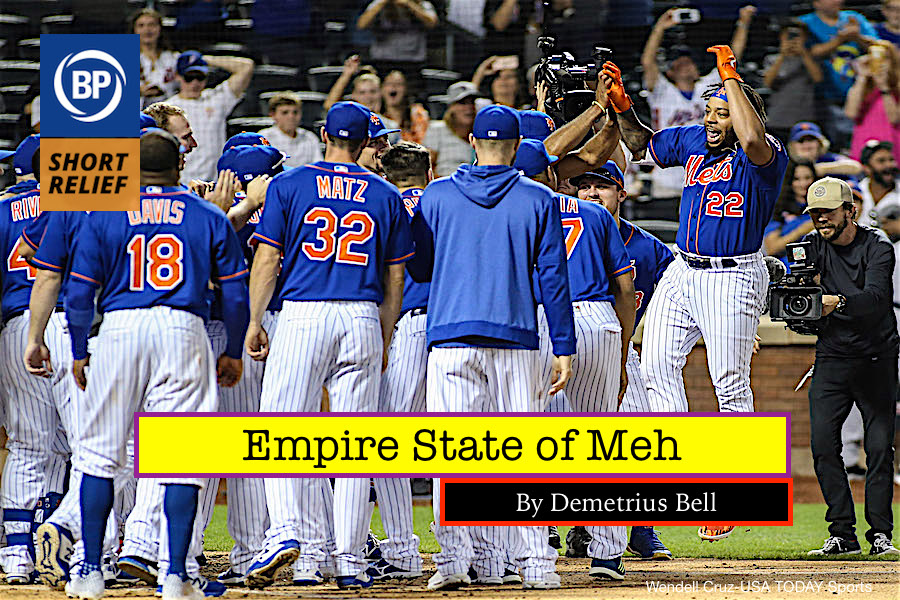 September 29th was the final day of this past regular season, and for Mets fans, there had to have been plenty of emotions percolating in the proverbial cauldron. The Mets were ending the season on a high note with an exciting extra-innings walk-off win over the Braves, but the Braves still had an ill-fated NLDS to deal with. The Mets season ended right then and there, as another year with reasonable expectations ended up going wrong and in a way that has summed up this franchise’s luck over the years.

That was also a good day for the New York (football) Giants, who were busy playing their Week 4 game against Washington. On this day, New York was too much for their NFC East divisional rivals and they cruised to a 24-3 victory. Washington fell to 0-4 and Big Blue evened their record at 2-2, and it seemed as if the little-fancied Giants were at least going to be decent on the gridiron this year. The compact 16-game season of the NFL makes it so that teams and fanbases can go from optimistic to moribund in a hurry. In New York’s case, there was actually a little bit of hope going on here.

As it turned out, September 29th ended up being a fateful day for both teams. Shortly after the Giants picked up their blowout win, the Mets walked off against Atlanta. It is now December 3rd and the Mets still have won a sports game more recently than the Giants have. The Giants have lost eight straight games since that point, and the Mets are busy planning for 2020 while also recovering from 2019. As someone who roots for Atlanta sports teams and knows all about the darkness that ensues when an entire city’s worth of professional sports conspires to disappoint you, I honestly and truly don’t envy anybody who is rooting for New York teams at the moment.

Despite Pete Alonso’s rookie-year brilliance and Jacob deGrom continuing to be excellent, Mets fans were seemingly counting the days until it was over. The Yankees didn’t win a World Series during the 2010s, which constitutes a lost generation for that team. The Giants and Jets played each other in November and the Jets won to “improve” to 2-7. The Rangers are coming off of two seasons without playoff hockey and the Islanders are currently nomads in the city. The Nets won’t have Kevin Durant back until next season and the Knicks are, well, the Knicks.

It might be difficult to really and truly feel bad for New York sports fans but I’ll surely be keeping them in my thoughts during this holiday season. As far as the Mets and their fans are concerned, they can at least take solace in the fact that they’ll be playing on Opening Day for a chance to extend their current win streak to four games. That’s gotta count for something!