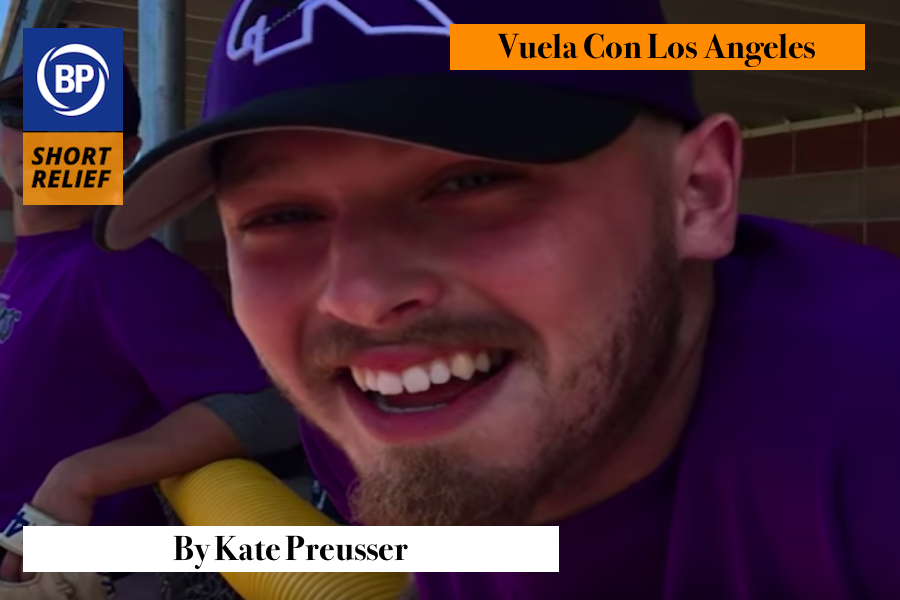 When you put Ryan Costello’s name into a search engine, the results that come up are about his death. Costello passed away last week in New Zealand, where he was set to play this winter in the Australian Baseball League as a member of the Auckland Tuatara.

The stories might mention that Costello was a 31st-round pick by the Mariners out of Central Connecticut State in 2017. Maybe they will mention that from unlikely beginnings, Costello rose from his initial assignment in the AZL to full-season ball, where he barreled 16 home runs in the unrelenting cold of spring and early summer in the Midwest. Maybe they’ll just say he was selected to represent the Clinton LumberKings — a team MLB now threatens with contraction — at the Midwest League All-Star Game. They almost certainly won’t say what a beloved teammate he was, or how nearly every player he came up with posted thoughtful, heartfelt tributes to “Cozzy” on their social media, or his heartbroken hitting coach at Clinton typing “vuela con los angeles papi” over a picture of the two of them hugging and smiling.

Maybe the stories will mention that Seattle traded Costello to the Twins right at the tail end of that All-Star season in a desperate attempt to shore up their big-league bullpen and maybe, maybe sneak into the playoffs for the first time in two decades. Maybe the stories will say it was Zach Duke for whom Costello was traded, who had a 5.52 ERA for the Mariners and, while not necessarily hampering them from making the playoffs, certainly did not help. What the stories will not tell about is the wife of a then 35-year-old Zach Duke, leaning over a squirming child and saying, softly but sternly, we need to pay attention, this might be one of the last times we get to see daddy pitch in the big leagues.

It’s tough to feel young in baseball, which, like all sports, starts kicking you over the ledge as soon as you cross the threshold.

I wish, instead of stories about his death, the top result was stories about how Ryan Costello lived. Specifically, this video, chronicling the day he was drafted by the Seattle Mariners, shot by the PR person of the Keene Swamp Bats, a NECBL team based in New Hampshire. In real time, you can watch his dreams come true:

“Can I just stay here?” he asks someone off-screen, peering intently at his phone, waiting to see his name pop up, hoping. Moments later, he’s drafted, and with a whoop, he takes off running across the field, almost flying. 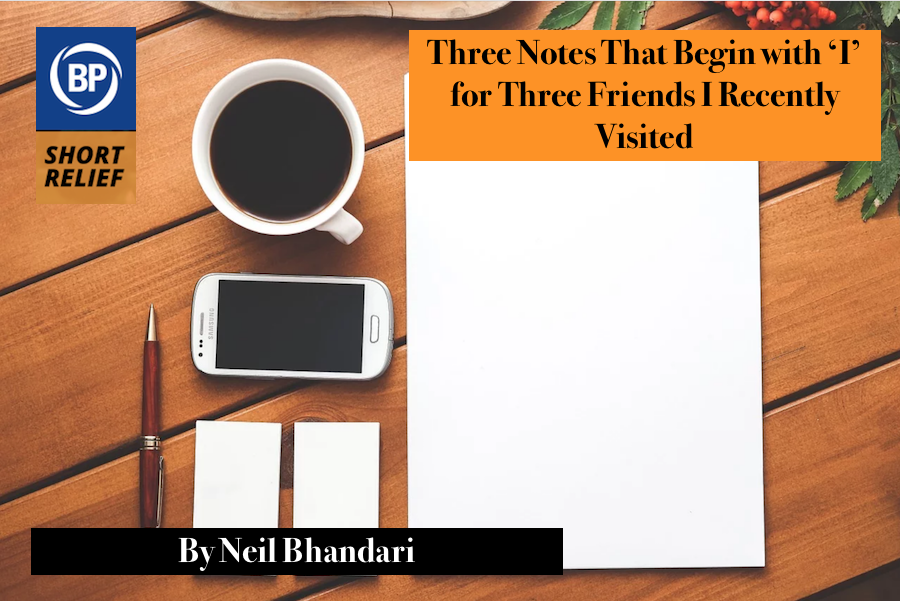 I imagine you’re watching the world series, yeah?
I imagine
The middle line
Of an email
That would’ve been a text
If we were born later
Or faster
Or farther apart.
I imagine
That we’d have never talked about baseball
But for me to sheepishly admit
An outsized obsession
And then brush it off
And move on.

We met up in Boston
In such a cold rush
That we skipped the Commons
And the Gardens,
Let alone Fenway,
And shopped for new sweaters instead.

I spent October jealous
Of your green city’s harvests.
Of the farewells to folk heroes
Ever uncrowned;
Your city still green.
[Nothing gold can stay.]
We had ours too, I guess, in 1969
(not nice)
When I was negative twelve;
And now they sell me Pepsi and balding.
And now I understand
Why we fawn over our failures for so long. 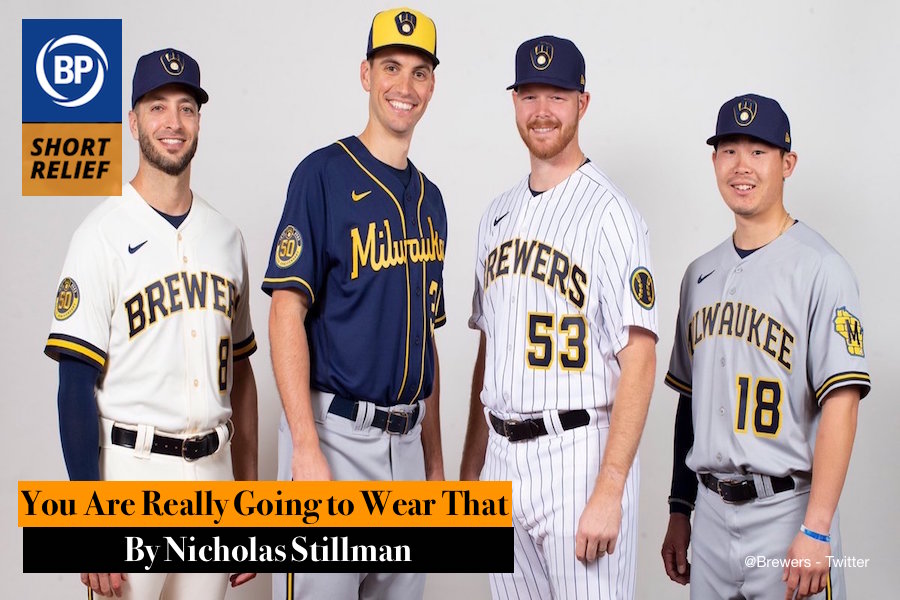 Without much offseason news to discuss, no major scandals, incidents, or villainous behavior, I think it is time to scrape the bottom of the Content Bin and discuss uniforms. Now, why, pray tell, does it matter what color shirt your team is wearing? Well, to misquote Mr. Seinfeld, “you’re cheering for laundry! You absolute fool! You imbecile!”

This is unmistakably true. From the game tickets most can afford to how far away from the television we sit, the color and shape of a player’s uniform is mostly what we consume. We cheer madly as the grey blurs add another number against the red-ish smears! Go blurs!

So, until we finally wise up and play baseball as the Ancient Romans did, completely nude, let’s dive in to the uniform changes announced for the 2020 season.

Your city. Your colors. #BrownIsBack and it’s better than ever! pic.twitter.com/ykPW6aW4R7

My new hometown team has shocked and pleased the baseball world by selecting a bold and innovative new color palette. “People wanted brown and we gave it to them,” executive chairman Ron Fowler said. They sure did. The Padres gave the people what they want, and what they wanted? Brown.

The beauty of brown, though, is that the other team may not see them. The infield, being composed of dirt, is also brown. In this way, the Padres are reanimating the spirit of their camo uniforms by again trying to gain an advantage through disguise. Not only are these brown uniforms very sexy, they’re also strategic.

Score: 4 Uniforms Out of 5 Uniforms

The internet loves the Brewers new look. If you’ll notice they are going with the, “We’re from Milwaukee” theme, which I feel is a questionable decision. What’s shocking about these, however, is they: “make permanent a change from original royal blue to the team’s recent use of navy blue.” Talk about whiplash. It’s a good thing they have “Milwaukee” written on the chest, otherwise who would even recognize them?

Doubling down on regionalism, they also have changed the color of their jerseys from white to cream. This is because, as well all know, “Milwaukee is known as the Cream City.” Cream City! We all know that! Because of the creamy streets!

Similar to the Padres decision to Be Innovative by Reusing Uniform Designs from the 80’s, back again is the Mitt Logo, which was cleverly designed to contain the letters M and B. A design so good almost no one notices it unless it’s pointed out. But unlike the Padres attempt to hide amongst the infield, the Brewers want to be seen.

Score: 3 Uniforms Out of 5 Uniforms

A refreshed look for the start of a new decade.

The internet had conflicting feelings about these new duds. Mostly it was a reminder that the Diamondbacks have decided to do Red as their color and most wanted something more innovative, you know, like from the past.

What I find far more upsetting is the “D-BACKS” stitched across the front. I’m sorry, who was at the pitch meeting for this nickname? “D-Backs” is not the name of a team, it’s the name of a street drug the guy who hangs out near the liquor store keeps trying to sell me. It follows the same logic as calling someone named Brad, B-Rad (who probably pitched this idea in the first place). What if other teams started to use this? The B-Jays? The A-Gels? The M-Ners? The P-Illies? The B-Jays (twice for emphasis).

If the name is too long to fit on the jersey, change the font. If it’s still too long, consider, perhaps, changing the name to anything else. A lot of other words out there, most of which are not close approximations of D-Bags.

Score: 1 Uniform Out of 5 Uniforms