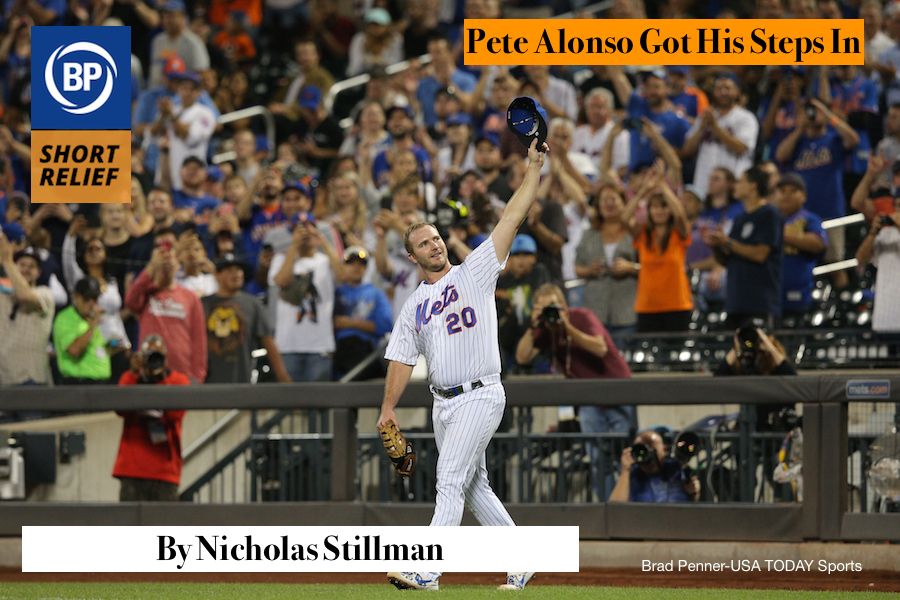 Like most Terrible People I have an app on my device (which is on my person at all times, even in times of war) which lets me know how many steps I’ve taken in a day. Mostly it lets me know that I am woefully short of meeting what seems to me an impossible goal — 10,000 steps. In my defense, I am not a professional athlete.

Pete Alonso, you will find, is a professional athlete. A professional athlete who happened to lead MLB in home runs while setting the new all-time rookie record with 53 dingers. Dingers, though, after contact, are the least strenuous hit type. And, given that home runs amounted to a league-leading 34% of his hits, while playing first base, he was seriously limited in strenuous activity. No one jogged lightly around the bases more frequently than Pete Alonso in 2019.

Unfortunately, Pete Alonso does not wear a pedometer. No device is counting his steps. How, then, will Pete Alonso know how many steps he takes per home run? Or how many calories he has burned? Or, therefore, how many celebratory beers he is able to consume to celebrate his achievement?

To answer these tepid questions and more, I decided the best course of action would be to hand count his home run trot using my fingers and, if necessary, toes. However, because broadcasts consistently cut away from the player to show grubby fingered fans spitting and fighting over a discarded leather orb, counting every step was impossible. I decided to instead take any uncut trot between two bases.

My sample was a random sampling of 20 Alonso Bombsos. This is what I saw.

After contact, video feeds typically show the hitter take ~1-2 steps out of the box. 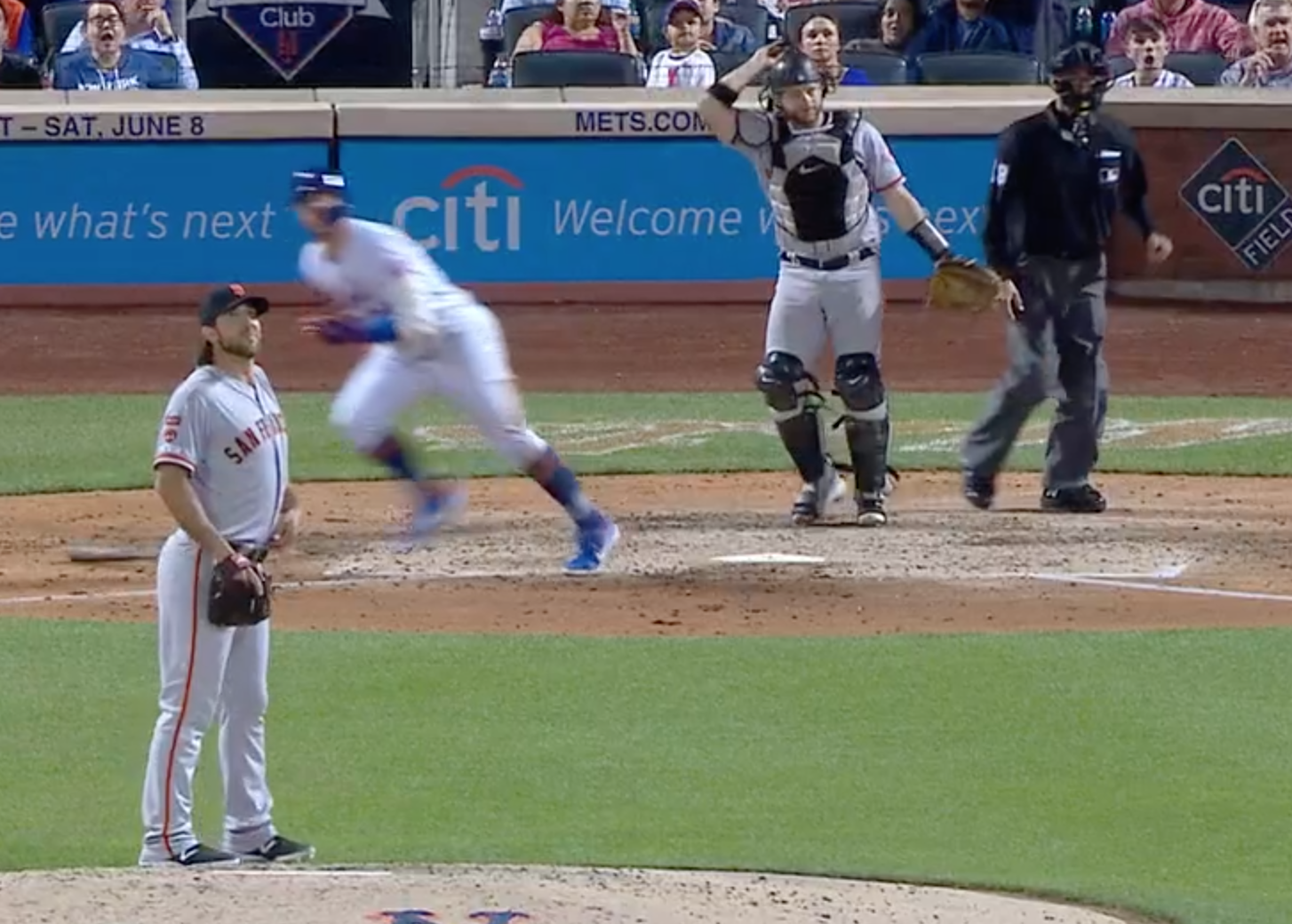 “Wow, he hit that ball hard and far,” remarks commentator number one.

We follow the ball to the fans losing their minds at nearly being brained by this foreign object. 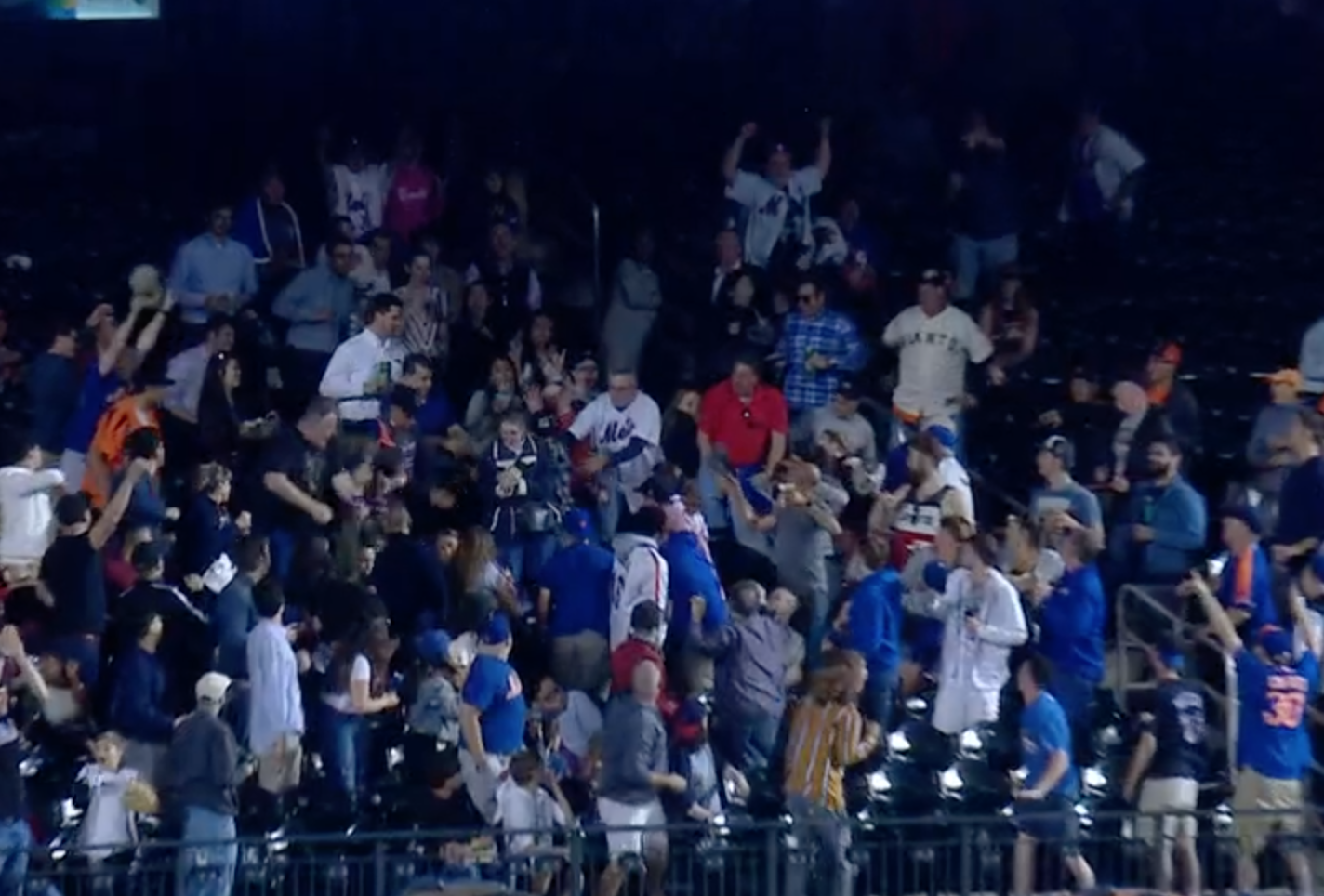 Cut back to hitter ~3 steps into the trot around first to reassure the audience he hasn’t fallen. 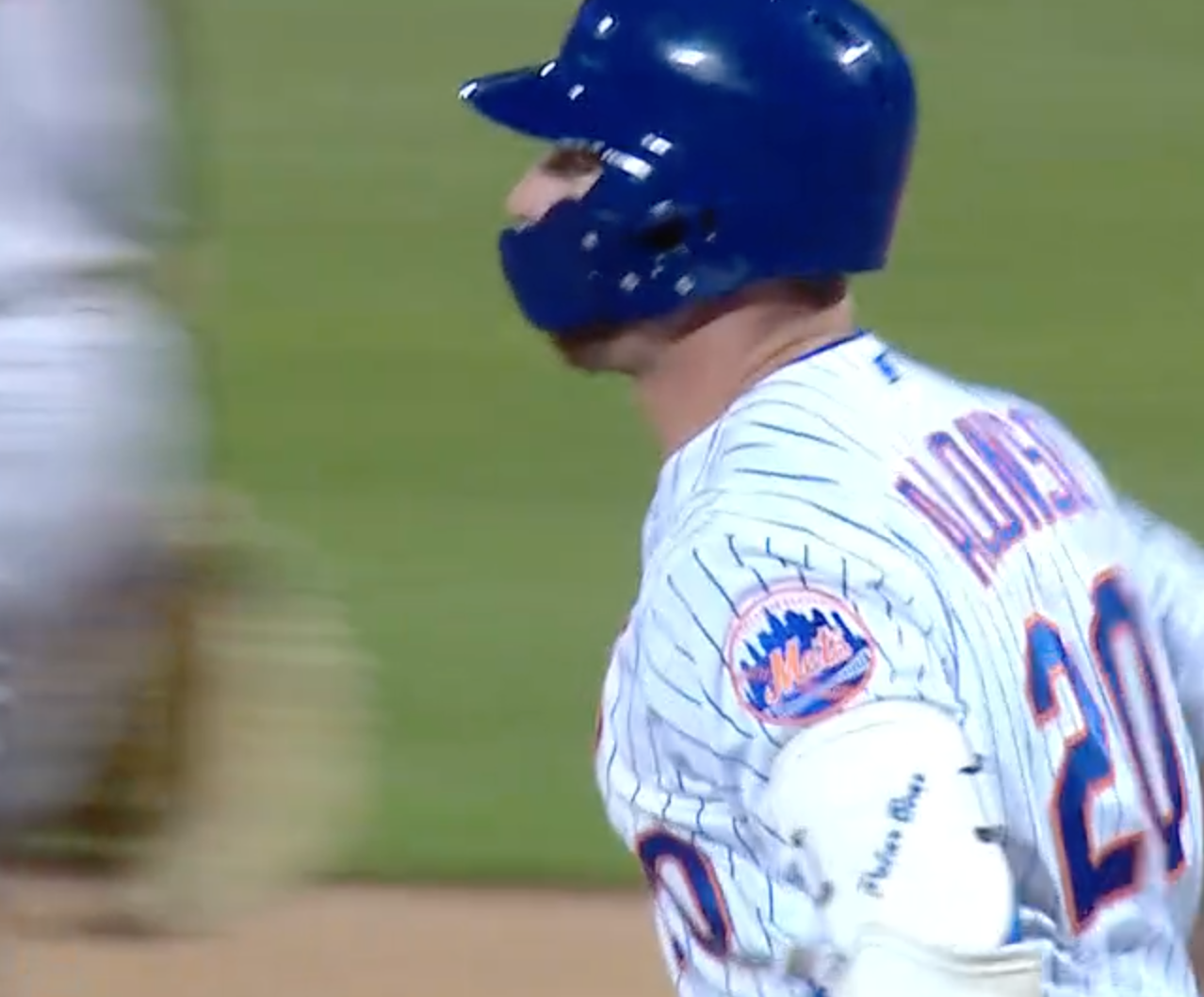 We watch for four more steps before cutting to the pitcher. We do this so we can see how sad he is and to remind viewers that for every dinger there’s a dinged, for every action a reaction, for every Alonso a SadBum. 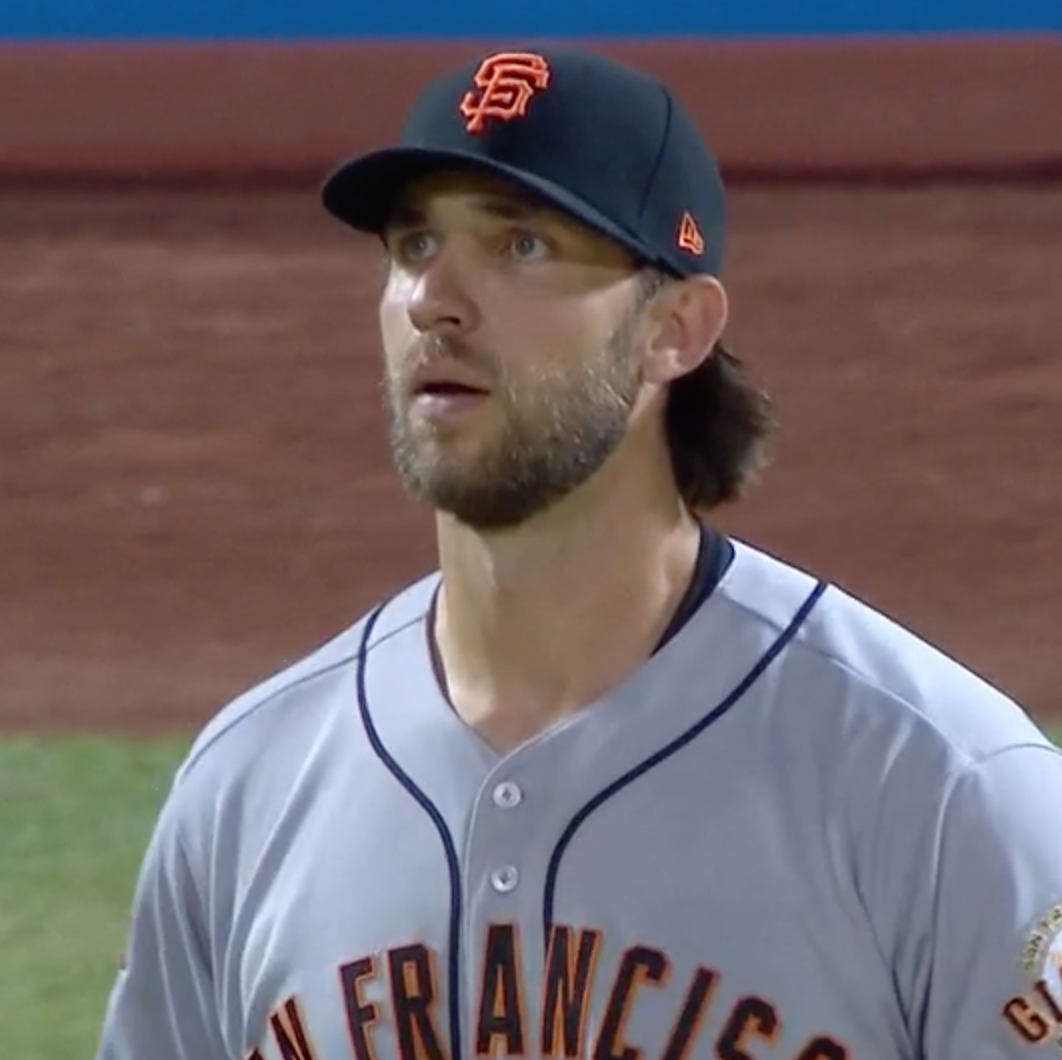 Excellent. Now we take a brief moment to make sure the hitter has not stopped for a nap (good, still running), before cutting to the Home Team’s Celebratory Home Run Thing. In the Mets’ case it appears to be this Big Apple. 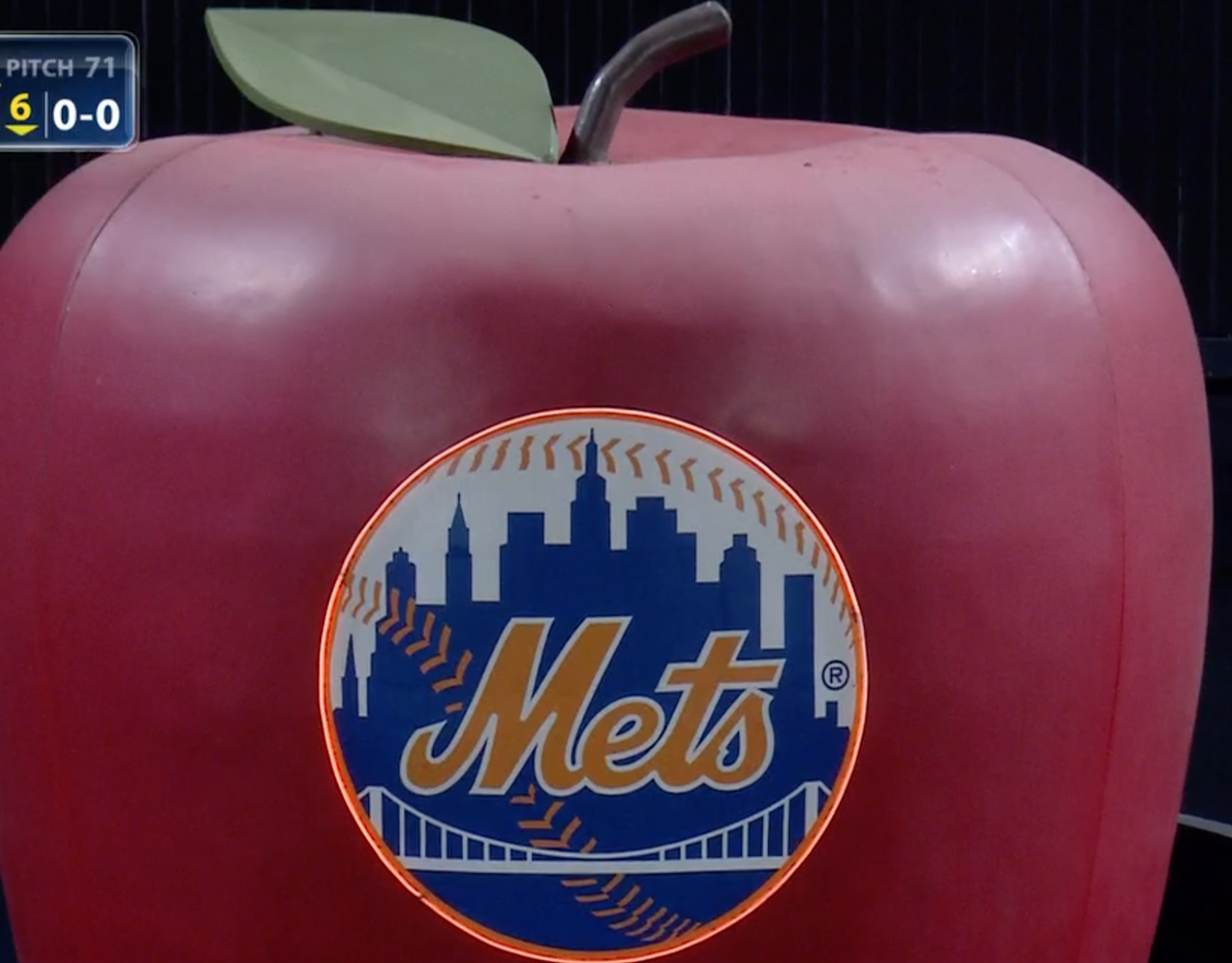 Now we get the raw, uncut footage: the shaky cam shot of the turn around third, punctuated by the obligatory low-five from the third base coach. 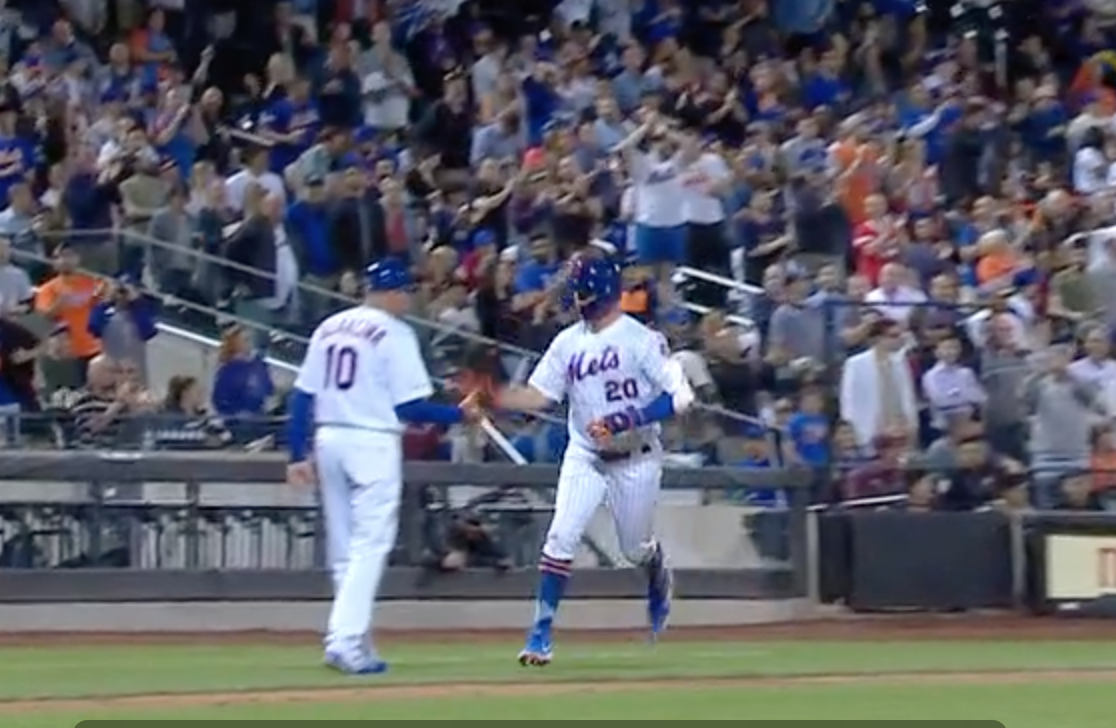 He touches home. He double high-fives a teammate. Then, it ends. This whole process takes about 20 seconds after contact.

By my count, Alonso takes anywhere between 14-17 steps between third and home. Extrapolated out, with one tacked on for a righty stepping over home, you get an average of between 57 and 69 (nice) steps per round trip. With his 53 home runs, Alonso is looking at a mean of 3,339 steps over the course of the 2019 season devoted to jogging the diamond. Which makes me feel mildly better about myself. That’s only a third of my daily goal. Though, admittedly, Alonso is jogging.

So, using a standard Calorie Burn Calculator and taking into account Alonso’s weight, height, jogging distance (~360ft x 53), and total time (~20 seconds x 53), we arrive at a total of 666 calories burned this season from jogging. Six-Six-Six, The Number of the Pete.

Now, the important part. Using Bud Light (110 calories) as the beer of choice for MLB celebrations, by this count Pete Alonso has earned himself an entire 6-pack of Buds. Drink up, Pete. You’ve literally earned it.

We know this now. 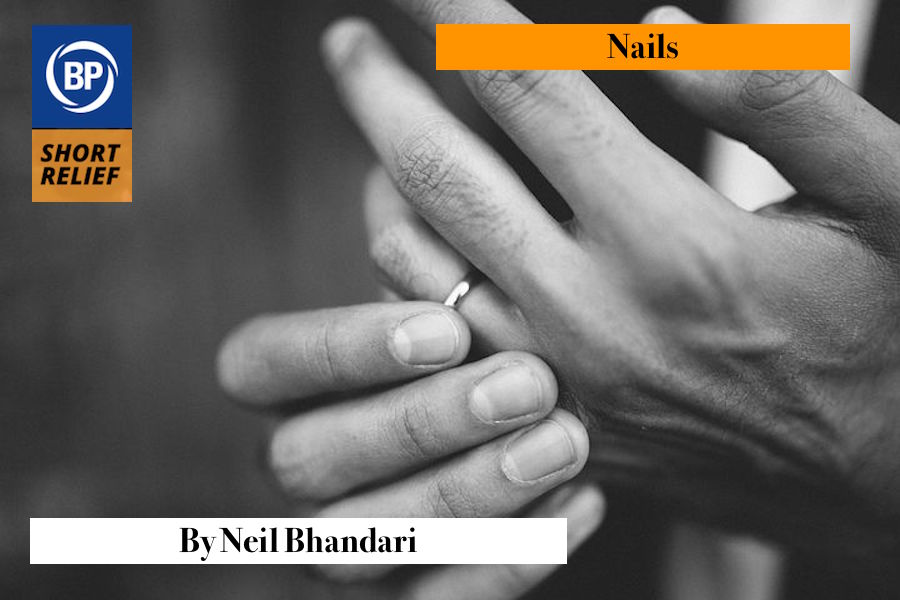 I’ve been biting my fingernails for about as long as I’ve had them. It’s perhaps my only addiction/affliction that goes back further than the one(s) I have for baseball in general and for the Cubs in particular. When I was seven, my parents brought home a clear, foul-tasting, prescription-strength medicinal nail polish in hopes of aiding the breaking of my habit, but I readily scraped that polish off with my big front teeth and continued gnawing those nails to the quick.

This habit of mine is only exacerbated by the nerves stirred up during baseball season, the pennant chase, playoffs, etc., and so the past five years of Cubs baseball have been hell on my hands, their only in-game breaks being when I pick up my phone to text my currently, cleverly named group thread Cubs Talk 2019. I know it’s unsightly — there is truly nothing appealing about nails and fingers and hands that’ve been mauled by their very owner’s mouth — none of the rustic, honest charm of the mechanic’s shorn knuckles, not even the gut-churning shop tale of the craftsman’s overeager band saw — just two thoroughly unphotogenic slabs of self-inflicted gnarled paw.

As soon as each baseball season ends, my hands, nails, between-finger skin and calluses get a chance to rest and heal, thanks to gloves and mittens and my relative lack of emotional investment in fall and winter sports. This year, that relief has arrived a bit early in the form of the Cubs’ somewhat unexpected, highly embarrassing collapse and elimination and Joe Maddon’s subsequent firing. It also just so happens that a dear friend of mine from that very same group text thread will be getting married in two weeks with guests coming in from such still-in-contention locales as New York and St. Louis and Los Angeles. So I’m looking at the bright side of the Cubs missing the postseason this year — while the photographer is roaming and cellphone videos are rolling, perhaps occasionally capturing one of my hands clutching a bottle of beer or a champagne toast, that hand — these hands — won’t be quite as gnarly as they would’ve been if I were still running off to sneak peeks at the NLCS during cocktail hour. 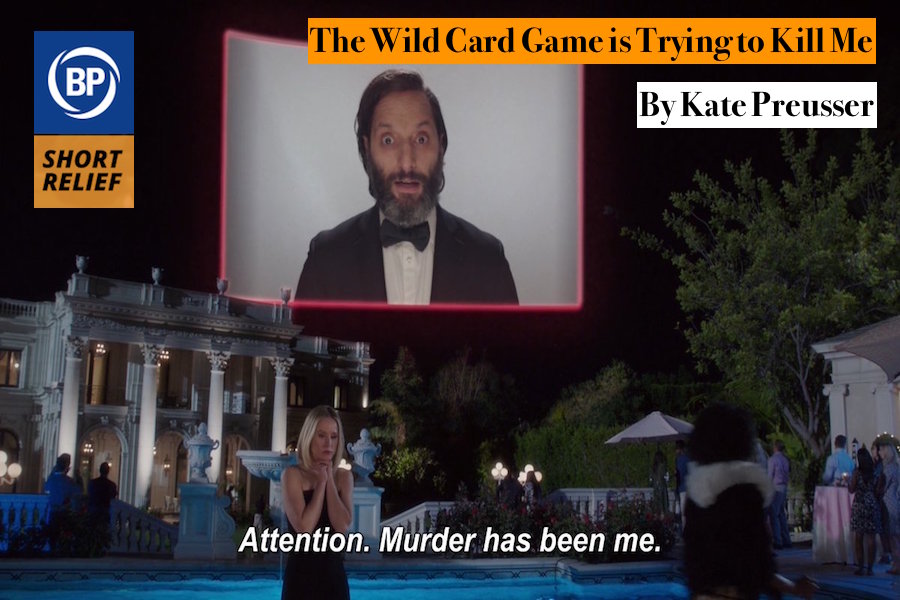 (Pictured above: Me, watching the Wild Card games.)

As a fan of a team that perpetually does not make the postseason, I enjoy watching the playoffs from a safe emotional distance. I root for my favorite players to do good things, for exciting moments that will draw more fans to the sport, for the Platonic ideal of baseball itself. Unmoored from any specific rooting interest and freed from my own team’s disappointing season, the postseason is an opportunity to binge on joy, to run barefoot through baseball’s buffet and skip all the vegetables. With a long and dark off-season looming, the playoffs are an opportunity to load up on cost-free delight to warm my belly all winter long as I mark off days to Spring Training.

There is one exception, though, to this guiltless dessert romp, and it is the tyranny of the one-game playoff. I recognize the Wild Card game is necessary to spread playoff baseball to deserving teams; that the play-in format is dictated by the need to make sure other teams aren’t languishing in a holding pattern for too long, waiting for their own games to start; I will even cede that the one-game winner-take-all setup is arguably baseball’s most dramatic moment. None of this changes the fact that it feels like Wild Card games are trying to exquisitely, personally murder me dead.

As much as I enjoy the high-stakes drama of one of these games, as an empath, I spend most of them feeling like my skin has been soaked in gasoline and I’m being slowly lowered into a cozy, roaring fire. “This is so INTERESTING!” I cry as a million fire ants build homes in my cellular structure. “PLAYOFF BASEBALL AT ITS BEST” as my blood is replaced, ounce by ounce, with hydrochloric acid. “LET THE KIDS PLAY” intones the nest of hornets that now bears only a passing resemblance to my person.

(Kate, have you considered, you know…not watching the game?) I have this thing, maybe there’s a medical name for it, I don’t know, but if I know a character on TV is about to embarrass themselves horribly, I literally cannot watch. I cover my eyes, leave the room, or skip forward in the show past the moment where the character, on-screen, has to come to grips with the moment of their humiliation (Kate, have you considered this is because you yourself live in similar shuddering fear of humiliation, you know parenthetical voice, you are getting really annoying). Imagine then watching poor Trent Grisham boot that funny-hopping ball, and that’s what I have to do, imagine, because the instant I saw that play I called on my friendly brain-anemones to Eternal Sunshine that memory right outta there. The same thing could happen to my least favorite player in the regular season and my reaction would be the same, because this is war and all peacetime rules are suspended, and the war isn’t between the two teams it’s between humans trying to do their best and the merciless whirring sawblades of the Wild Card game.

Because deep down, maybe that’s what I’m trying to do: accrue enough good karma that if one day my team finds itself in the same position, they will be surrounded on all sides by similarly benevolent well wishers, willing them to success and covering their eyes during all the in-between moments.