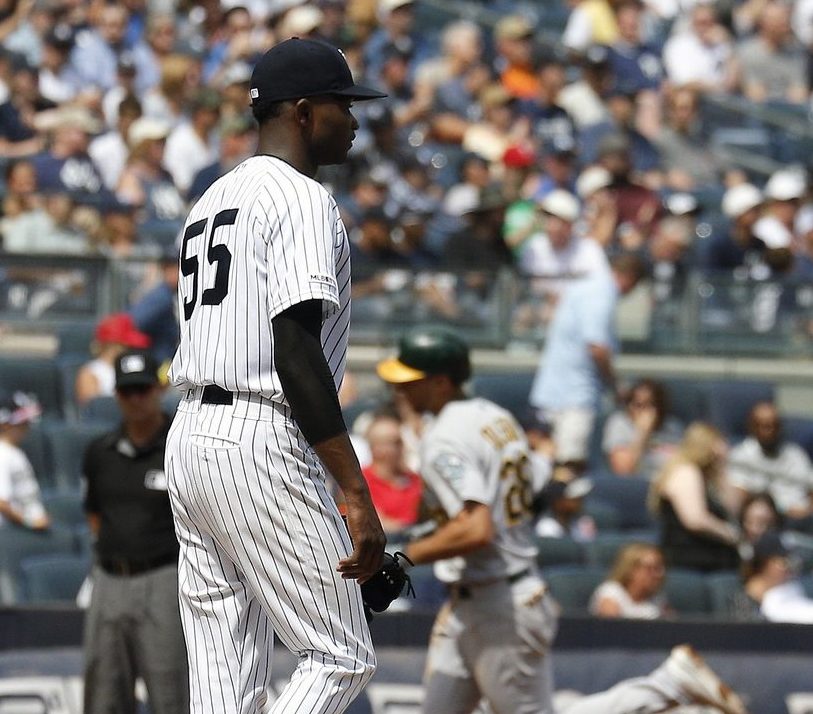 It’s long been said that baseball is a game of failure.

That’s not a hard axiom to support considering that premier players throughout history have succeeded at or slightly above 30 percent of the time as measured by batting average, and between 35 and 40 percent of the time using on-base percentage. Teams that win 100 games, considered titans in their seasons, will still lose around 60 times.

Failure was also a theme surrounding a 100-win team last Thursday: The New York Yankees hit the century mark in the left column, beating the Angels 9-1, and simultaneously clinched the AL East title. Yet, that was also the day it was announced that pitcher Domingo Germán, a breakout star for the division champions, was being placed on administrative leave due to the possibility of his having committed an act of domestic violence. One report says Germán hit the mother of his children in public at a charity event, while a subsequent report seemingly confirmed the premise but changed some details. Nobody is disputing the what; the how is still up for debate.

Yet again, MLB is presented with the kind of case that they’ve shown time and again they can’t be trusted to properly handle. Like his twin in opulence and ignorance, the NFL commissioner, MLB commissioner Rob Manfred, as well as his underlings, have decided they want to be arbiters of justice without any idea of how to act as such.

Consider that a witness to the alleged event, initially reported as an official with the league but was then disputed, saw what transpired between Germán and his partner. What that person saw was enough for MLB to put Germán on leave, but at no point was that information used in the filing of a police report. Instead, it was left to Germán’s employers to begin the process of some form of justice.

Once MLB announced the Germán suspension, the Yankees released a statement saying, “We fully support all measures being undertaken by the Commissioner’s Office pursuant to the Policy on Domestic Violence. We support this policy which reinforces that domestic violence has no place in our society and cannot be tolerated.” The juxtaposition of a statement on intolerance of domestic violence and Aroldis Chapman closing out their division-clinching win leaves us feeling empty, hollow.

The choices made by the Yankees and Major League Baseball are not simple errors in judgment; they are willful acts that demonstrate not intolerance as they would have you believe, but rather acceptance of heinous actions in the name of on-the-field performance. Chapman can throw extremely hard; he gets a big money deal and a huge stage on which to shine after allegedly choking his girlfriend in their Florida home.

Germán allegedly hit his partner in public and was allowed to pitch the next day. When his upcoming suspension ends, he’ll return to the Yankee Stadium mound and within weeks if not days his reported assault will fade into the background. Each makes explicit something that is generally implicit, though seemingly less so every day: Morality is secondary. Secondary to profit, to reputation, to whatever is convenient in the moment.

If baseball wants to take a serious stand, this performative cycle can’t be the way. The current means only serve as a facade, no different than the smoke mirrors that concealed the great and powerful Oz. Major League Baseball needs to create a wholesale system that doesn’t just focus on punishment, but also on reform and support for the abused.

It should start with the player being taken off the field as soon as possible. Current policy allows for administrative leave, on which Germán was eventually placed, and where he’ll stay through the 2019 postseason following an extension of the original seven-day period. There have been other cases, such as with the Phillies’ Odubel Herrerra, where extensions are given. Those are rare at this stage in the policy’s existence. Amending the current policy to allow for an indefinite leave until any investigation concludes would be a positive step. It would take pressure off investigators to wrap things in the allotted time period, allowing for a more thorough vetting of any given situation.

It’s also paramount that the player in question be placed on administrative leave as soon as possible. Consider the Germán situation specifically, where reports have the incident happening on late Monday/early Tuesday. Germán pitched Tuesday, before hitting the list on Thursday. That lag period is underlined by the conflicting reports of who knew what when, but it’s evident that no matter which report is accurate, that a ball was dropped by someone at the top. Preliminary investigation is necessary, but a period of two-plus days from witness to implementation of administrative leave — allowing the player to pitch in the intervening period —  seems excessive, in addition to being poor optics.

Removing an alleged abuser from the limelight may be seen as overreacting but it’s the favorable option next to leaving an abuser in the exalted position occupied by professional athletes and all that position affords. Should it be shown that the player is innocent, returning him to active competition comes  with less overall damage than allowing a guilty player to have continued on, business as usual

Should a suspension be necessary however, the number of games should be increased and universal: 100 games including any postseason action would be a good start. A whole season’s worth of games wouldn’t be unfair, either. While players, once suspended, are subject to a program of prevention, it’s unclear what that specifically looks like. The announcement in 2015 gives basic ideas of what the program looks like in the abstract, but is light on specifics. It also makes clear that this is designed to be confidential. That idea is understandable on a certain level, but it makes it difficult, if not impossible, to judge whether the joint policy board is doing its job properly or not. Our Zack Moser did a great job laying out some ideas for this also in regards to Addison Russell.

There’s also the aspect that on a seven-person board, four of the seven seats are occupied by the commissioner’s office and the Player’s Association (each gets two, respectively). That’s a little unsettling, as those two organizations are going to have agendas that run perpendicular to those of the three “experts” that join them. The PA is here to advocate for the player, that’s by definition their job. The commissioner’s office serves at the leisure of Rob Manfred, and by extension the 30 owners he works for. Those owners’ top priority as business owners is to make money and win games, blurry as that line is in the modern era. With no threat posed to either of those goals, especially the former, change will be slow.

In addition to creating more transparency in the rehabilitation process, there’s another field that the league should address immediately. Far too often we hear teams and the league state they’re here to support the player. It’s time that they put their money where their mouths are, and support the people who actually need it: the partners, primarily women, whose lives are shattered in the blink of an eye.

Major League Baseball should create a support network for victims that cuts down on the cycle of abuse. Plenty of incidents go unreported because the victim is dependent, financially or otherwise, on their abuser. Providing a situation where the league can close that gap would be paramount and unprecedented. The league took in $10.3 billion last year: it is impossible to make a case that the league can’t afford to support victims however they need if it means creating a more fair system of reporting and adjudication.

Far too often we hear teams and the league state they’re here to support the player. It’s time that they put their money where their mouths are, and support the people who actually need it: the partners, primarily women, whose lives are shattered in the blink of an eye.

Per the National Council Against Domestic Violence, every 20 minutes someone is abused by their intimate partner; one in three women have experienced some form of physical violence by an intimate partner. It’s a disgusting crime with no justification or explanation, and one that’s all too prevalent in every walk of life.

Time and time again, sports are called a “safe space” from real life. A mythical arena where everyone can unplug from real life, losing themselves in the pomp and circumstance of America’s pastime. Those who proclaim this idea will tell you that for three hours or thereabouts, people don’t have to worry or consider anything else but the game in front of them.

For those who make up the above statistic however, baseball isn’t a haven. It’s a harsh reminder that the horrors they’ve experienced aren’t valued properly. That you can do abhorrent things, and still be rewarded. That the hand which throws the fastball or grips the bat is more valuable to society than the one that strikes their partner, shattering the trust and well-being of their victim.

It’s a failure, full stop. Major League Baseball and its clubs every day fail the victims of these incidents, the fans who tune into a game preferring to not see purveyors of partner violence, and those who have suffered the scourge of a crime that society has deemed not important enough to be ex communicate those who commit it. The failures change in each case, but the overall theme remains.

Germán will face his punishment, serve it, and return to the hill sometime in 2020 if history is any reliable model. The Yankees meanwhile will continue their winning ways, bolstered in part by the face of MLB’s disregard for others in their reckless administration of judgment and punishment.

The rest of us lose; the players that don’t want to share locker rooms with the Roberto Osunas and Addison Russells of the world. The fans who would prefer the league not give tacit endorsement to abusers by allowing them to represent their league. Above all others however, the victims lose. The people hurt the most see their abusers return to prominence, while they must forever live with the haunting memories of someone they love hurting them.

The way the league continues to carry on, it’s also a failure that will be unending. Unless significant changes are made, the only thing that will be served is a continued legacy of abusers facing minimal consequences while victims getting the short end of the stick.

That’s the ultimate failure, in a sport full of it.

You need to be logged in to comment. Login or Subscribe
Matthew Gold
That's a good and strong statement. Is there a way to compile a rating of the teams by how many abusers they carry?
Reply to Matthew