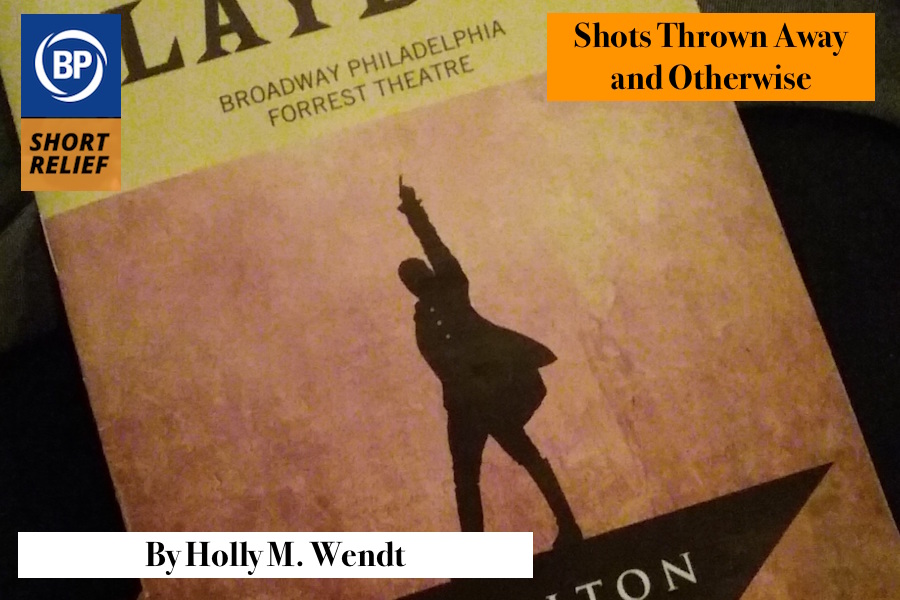 Last Thursday night, while the Phillies battled the NL East-leading Braves in the dampened confines of Citizens Bank Park for the continuation of their vestigial postseason hopes, a musical battle for American independence was waged at Forrest Theater, as Broadway Philadelphia’s production of Hamilton played to a full house.

If, somehow, you have missed the absolute phenomenon that is Lin-Manuel Miranda’s razor-lyriced envisioning of the life of Alexander Hamilton, the first act of the musical is devoted to Hamilton and his role in the American Revolution and the second to the rest of his adult life, cut short in a duel with Aaron Burr. The predominant theme throughout Act I is the triumph of the underdog: Hamilton himself rising from the humblest of beginnings to being a member of General Washington’s inner circle; the ragtag colonists achieving a victory over the vast might of England.

Before the lights in the theater went down at 7:30, before I finally got to see this show I have been enamored with since 2015, I sneaked a glance at the Phillies score. Because of a brief deluge (which left me wringing water from my trouser-cuffs in a nice restaurant and deeply regretting my choice of shoes), they’d only gotten in the top of the first inning at the Bank—and the Phillies were already losing, an error and another home run to blame. I turned off my phone and I forgot about baseball for three and a half hours.

Confronted with a spectacle like Hamilton, there’s nothing to do except forget about baseball while it’s happening — forget about everything else, honestly. That’s why we came, that’s why we made a nearly five-hour round trip on a Thursday night when I had to teach early on Friday. And once the first lines unspooled from the actors’ mouths, there was no other option than to be immersed; the experience itself transports because this is what art does. The actors’ skills, the composer’s deft ear, the crew’s seamless execution of light and sound and physical trappings—when everything is working together, how can there be room for anything else? How can the audience do anything except believe in this moment, these characters, and their yearning toward triumph?

I would like to be making some kind of extended metaphor about the Phillies here, that they’re the plucky underdogs of this season, that there’s a kind of charmed inevitability about some miraculous last-minute surge, but I can’t. Though the Phillies did, against all expectations, eke out a win I read about as we drove out of the city, they’re not gaining ground on the teams standing between them and the second Wild Card slot. They might surprise me (as I always hope), but my more pressing concern is the date. The games remaining dwindle, no matter who I’m rooting for, and too soon I’m going to be a moody approximation of that Rogers Hornsby quote.

So what can I hope for now? For the ability to sink into the baseball that remains, for the ability— for even an hour each night, a few innings — to enjoy. To forget everything else.

Given how the world feels, given my schedule this term, given all the many givens, I’m not any more optimistic about my chances to really do this than I am on the Phillies’ potential to play that striking single game in early October in hopes of playing a handful more. But I’m going to try. Seems like the right thing to do. 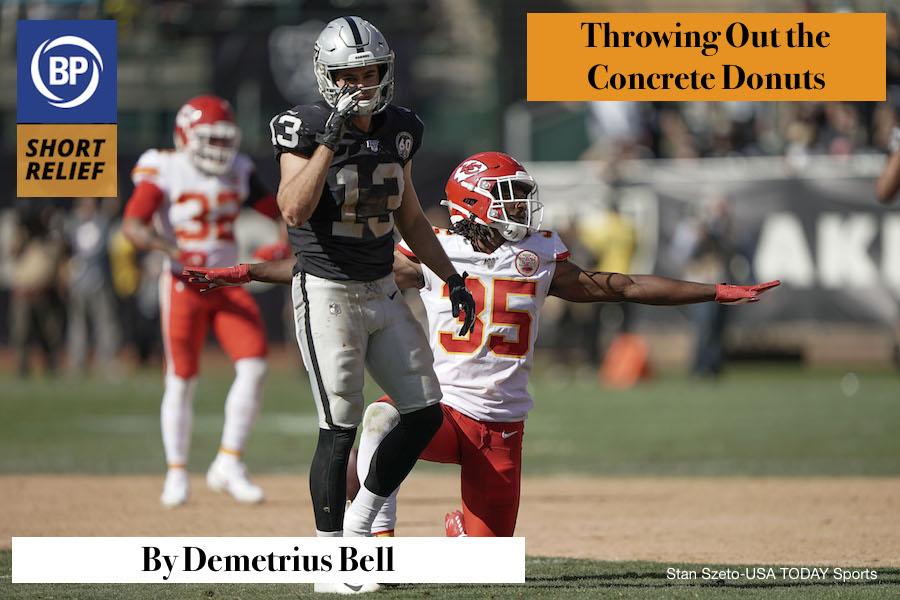 This past Sunday was a historic day when it comes to both the NFL and by extension, MLB. The Oakland Raiders played the Kansas City Chiefs, but the result is completely inconsequential to what happened. Instead, the venue is what’s important. The game took place at Oakland-Alameda County Coliseum and it happened during September, so it was a football game that occurred during the baseball season.

In the past, that intersection meant that a few of the old multi-purpose stadiums (a.k.a. “cookie-cutters” or “concrete donuts”, which was such an ironically tasty way to describe such unappealing ballparks) across the country would have to deal with a huge patch of dirt at some location on the gridiron. For a while, this was a common sight and it meant that the season-long sprint of football season was here and that we were getting down to the nitty-gritty of baseball season. It’s a fun time to be a sports fan, but some of that atmosphere is about to go away forever.

The reason why the Chiefs-Raiders game was important is because it’s very likely going to be the final time that we see an NFL game played with a huge patch of baseball dirt in view. Even if the Athletics make a miracle run to the World Series, they’ll have the stadium to themselves on Sundays since the Raiders won’t be playing there again until November. By then, the baseball offseason will be in its infancy and the Raiders will continue to play through their final season in Oakland before moving out to the desert in Las Vegas.

While it’s always been a delightfully quirky visual to see the NFL just decide that a baseball diamond is an inconsequential obstacle to the chaos that occurs on a weekly basis on the gridiron, it’s a bittersweet moment to see the intersection of the two sports go away for good. It’s both sad to see the reminder of baseball’s seasonal cohabitation with football disappear for good, and great, because it means that the age of multipurpose stadiums is also about to be finished for good.

Both leagues are better off for the separations. Baseball suffered from an aesthetic standpoint, as it just seemed as if the game was being played to pass the time at these stadiums until the football games were played. Now, baseball can be played in cathedrals that are worthy of the sport, and football stadiums are spacious and loud enough to contain and release all of the energy that’s spent once a week.

The two sports can peacefully go their separate ways in an amicable manner. Mount Davis will live on as a reminder of what used to happen there on Sundays, and it’ll be hard to look at center field and not remember what the view used to be like before it was replaced by cement. The Raiders get the desert and the A’s get their husk of a home back. 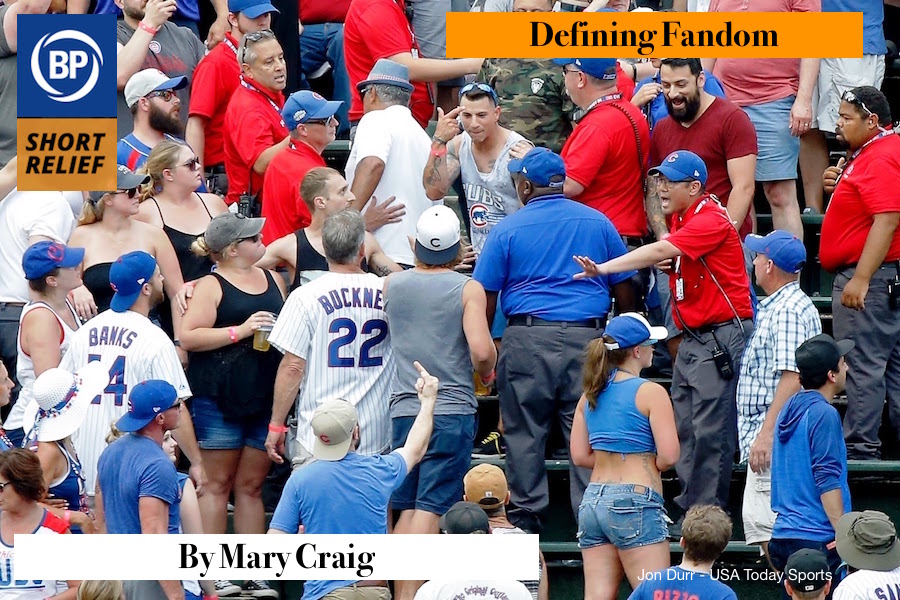 We all know that the greatest reward for the countless hours we dedicate to this sport is not a sense of fulfillment, the lifelong friendships we make, nor the chance to watch the human condition lay itself before us over the course of 162 games. No, the greatest reward is the opportunity to lord our superior knowledge of the game over other, clearly inferior fans. The difficulty is in identifying these lesser fans.

One such difficulty emerges when the more “fairweather” fans attempt to disguise themselves by pretending to possess more knowledge than is actually the case. In many cases, these fans will use a gender-based system to pinpoint more vulnerable fans in the hopes of elevating their own status through exposing the ignorance of these vulnerable fans. This method, however, is more arbitrary, annoying, and unsuccessful than most would care to admit.

Predicting the chaos instilled by this arbitrariness, the 1904 edition of the Baseball Encyclopedia offered a simple solution. Added to the encyclopedia that year were three starkly-defined categories of fandom: “fans”, “rooters”, and “knockers”. If every onlooker adhered to these categories, it was thought, engaging in conversation at baseball games would be a smooth affair.

According to the Encyclopedia, fans are the aristocratic onlookers, eager critics and admirers of a player’s work. These men and women are said to know more about the game than most players, are fiercely loyal to one particular team, and often plan their days around baseball schedules. Then there are “rooters,” who are the more democratic, vulgar, unaffiliated fans. They are less knowledgeable and more prone to root for individual players over specific teams. Below these two categories is one other: “knockers.” This category belongs to the most casual of fans, those who attend games on a whim and leave before they’re finished. As such, it is impossible to hold a conversation about baseball with these attendees.

In today’s terms, “fans” are season ticket holders who only enjoy games when they have a scoresheet in front of them and a custom player jersey on their back. Next, the “rooters” are the most likely to slosh beer all over the place while loudly listing the reasons why Mike Trout isn’t as good as Babe Ruth. Finally, the “knockers” are the multitude of people attending the game out of boredom. They will arrive late and leaver early in order to “beat traffic.”

Once you place yourself in one of these three categories, you will find yourself liberated from the stress of uncertainty. You will know which fans to belittle and which to engage in serious discussion. Your baseball experience will be enhanced tenfold, and you will never be more virtuous a citizen.

Go forth and reap your rewards.