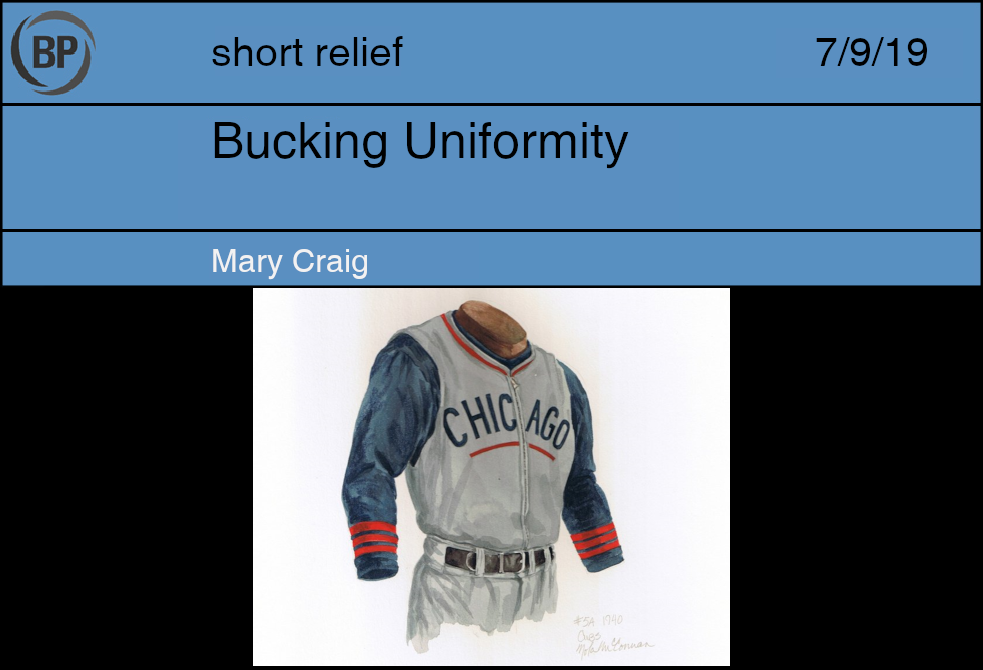 The team which contained the best pitching staff in baseball the previous season had seen a miserable regression to 5th best in the NL in 1939. The jokes, then, practically wrote themselves when the team debuted new uniforms for the 1940 season.

“As long as our team hasn’t any arms, Wrigley feels we need no sleeves,” wrote Chicago Harold-Examiner editor Warren Brown. Others added that it looked like the players were “modelling unfinished coats,” a product of the rough economic landscape of the Great Depression, where fabric for sleeves “must be viewed simply as an excess.”

The goal, according to the team, was to improve range of motion which was restricted by the standard woollen sleeves. No longer would players meet the unyielding tautness of flannel as soon as their arms reached shoulder level. Now, sporting an innovative garment free of flannel and sleeves, their comfort and performance could improve in tandem, guided by the breathable and flexible knitted rayon fabric, newly imported from France. As an added bonus, the vests offered a front zip for additional ease of wear. Though the vest’s goal was somewhat defeated by the fact that players wore a long-sleeved shirt under the vest, players nonetheless were very into the look, with many requesting more form-fitting uniforms to really show off their physique.

Unfortunately, dragged down into the doldrums of conformity, the Cubs abandoned the uniforms in 1943, returning to the standard, ill-fitting yet restrictive knitted fabric. It took another 14 years before a team dared to don vests. Every few decades from 1956 on, teams have channeled the 1940 Cubs, bringing vests back into style, though each instance is short-lived because humans are people of convention and not even the 2008 recession warranted such budget cuts.

Perhaps, though, if the state of baseball reaches a point where it is starved for novelty, teams will adopt the vest en masse. Until that point, cherish the vests you’ve seen these past few days. 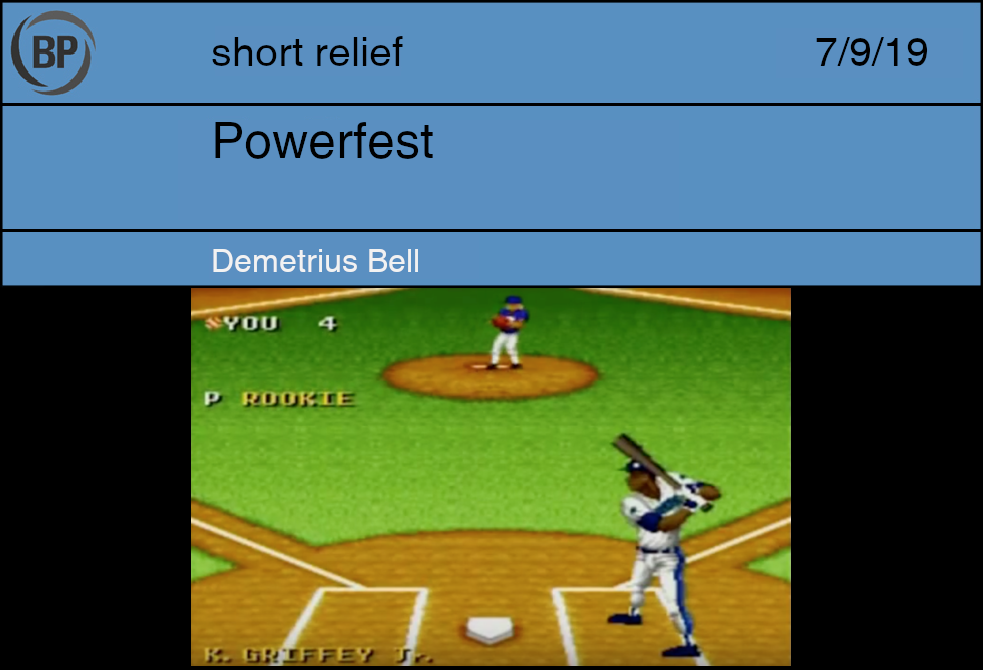 The Home Run Derby has gone through its ups and downs during its time as a companion event to the All-Star Game. When I was a kid, the entire event was required viewing. There was a time during the aughts where I honestly soured on the event, but I have to give credit to MLB for finding a way to spice things up to the point where I’m interested in watching it again. Everybody loves dingers, so it should be an easy and fun event to watch.

One of the best things about baseball video games is that they mostly come with a Home Run  Derby mode as well. It would be preposterous to leave it out of your game, as its become as embedded a baseball video game tradition as it is a baseball tradition in real life. One of the first baseball games to do the Home Run Derby justice in a digital landscape was Ken Griffey Jr. Presents Major League Baseball, which came out for the Super Nintendo ahead of the 1994 season. While previous games took a crack at it, it just came off as boring or unintuitive. On the other hand, this classic for the SNES took full advantage of the game’s engine and what made the game itself a joy to play.

It was easy to just fire up the game, enter into Home Run Derby, and just start slamming dingers using that gray controller with purple buttons. Anybody could do it, but apparently there was a skill to doing it. Even if you got really competitive with your friends, I don’t think that any casual player could have imagined that the Home Run Derby mode from a Super Nintendo game could be played with any sort of serious prizes on the line.

As it turns out, there was a time when the Home Run Derby mode in this game was used for a legitimate competition. Hardcore Nintendo fans will tell you about this event called Nintendo Powerfest ‘94, which was one of the successors to the classic Nintendo World Championships from earlier in the decade. You had to rack up points in three games: Super Mario Bros: The Lost Levels, Super Mario Kart, and Ken Griffey Jr. Presents Major League Baseball. In the baseball leg, you had to hit as many homers as possible in a Home Run Derby.

This means that even though the term “eSports” wasn’t a thing until nearly 20 years later, the Home Run Derby mode in Ken Griffey Jr. Baseball was basically an eSport. With the absence of a World Series during 1994, this may as well have been the eWorld Series. I know that only two people will agree with this absurd notion, but I’m just going to put it out there: the digital Home Run Derby of 1994 may not mean much now, but it’s something cool to think about in the wake of the actual Home Run Derby.

You need to be logged in to comment. Login or Subscribe
justarobert
Demetrius, were you around for the 2013 viral craze that was Winnie the Pooh's Home Run Derby?
http://kotaku.com/5973249/this-winnie-the-pooh-game-is-way-too-difficult-for-kids
Reply to justarobert