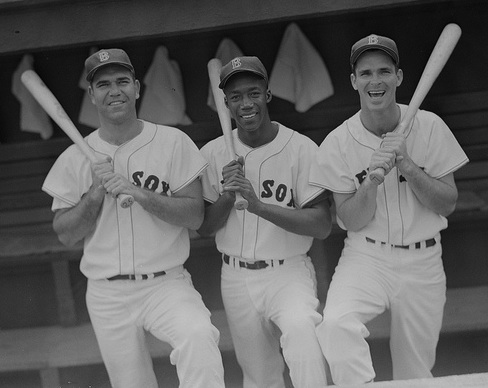 As early as the 1930’s, African-American reporters sent open letters to owners while polling white managers and players and bringing Black players to unscheduled tryouts in hopes of integrating baseball. These journalists—along with several white writers from mainstream papers—pressed hard for baseball’s gatekeepers to hire Black players as unions and civil rights groups picketed outside of ballparks in multiple cities.

After a member of Boston’s city council threatened to ban baseball on Sundays until the Red Sox gave at least one Negro Leaguer a tryout, the Sox held what became known as a “sham tryout,” inviting Jackie Robinson, Sam Jethroe, and Marvin Williams to Fenway Park in April 1945, though it was clear the team had no intention of signing any of them. (It’s rumored that the Red Sox passed on Robinson, Willie Mays, Larry Doby, Ernie Banks, Roberto Clemente and Hank Aaron.) In 1950, the team signed Lorenzo “Piper” Davis to a minor league contract, but he was released before making it to the majors.

Much is said about Jackie Robinson being the first, but Pumpsie Green’s experiences as the last doesn’t garner as much attention. He never wanted to be in that position. “I did the best I could with what I had,” Green told The San Francisco Chronicle in 2018. “I had a little success, and I enjoyed that. I always say to myself, ‘I accomplished the first thing I set out to do because I always wanted to be …’ well, I didn’t always want to be a major-league ballplayer, I’ve always wanted to be an Oakland Oaks ballplayer because that was the big team around here.”

Pumpsie Green grew up in Richmond, California. A three-sport athlete at El Cerrito High, he decided to forego a baseball scholarship to Fresno State University, playing shortstop at Contra Costa College before signing with the Oakland Oaks in 1953, who sent him to their Single A team in Wenatchee, Washington. Green never made it to the Oaks roster, his contract sold to the Red Sox in 1955. After buying his contract, the Red Sox wanted Green to report to Montgomery, Alabama, but Green refused, citing the ongoing violence surrounding the civil rights movement. Earl Wilson, a Black pitcher in the Red Sox organization, was in Alabama. Perhaps the team wanted Green and Wilson together, but Pumpsie didn’t want to feel unsafe. He was then sent to Albany, New York to join the Albany Senators for the 1956 season. He spent the next season playing for the Oklahoma Indians, and the one after with Minneapolis Millers.

Before spring training in 1959, the NAACP once again pressured the Red Sox to sign a Black player. Green was invited to their spring training in Arizona. Upon arrival to the team hotel, he was denied a room. Scottsdale was a sundown town—African-Americans had to be out of the town before the sun disappeared from the sky. He ended up getting a room 17 miles away, in Phoenix, where the San Francisco Giants were staying.

According to Boston sportswriter Al Hirshberg’s 1973 book, “What’s the Matter with the Red Sox?” then manager Mike “Pinky” Higgins once said, “there will be no n——s on this team as long as I have anything to say about it.” Despite “the best spring I’ve had in my life,” Green wasn’t on the Opening Day roster. The Boston chapter of the NAACP was outraged. The rest of the league had integrated, and teams were experiencing winning seasons with Black players on their rosters. Boston had a guy who tore up spring training and it was now obvious he wasn’t being called up because he was Black. Despite being hounded by various civil rights groups to speak out, Pumpsie decided against it, figuring it would hurt his chances. Like Jackie, he was forced to ignore racism in the hopes his great ball play would speak louder. “So far as I’m concerned, I’m no martyr. No flag carrier. I’m just trying to make the ballclub, that’s all. I’m not trying to prove anything else but that. I’m not even interested in being known as the first Negro to make the Red Sox. I just want to make the Red Sox and all the rest of it can wait, “ he said in 1959.

“Pumpsie Green is just not ready,” Higgins said. He was sent back to Minneapolis, where he hit .320 through 98 games.

On July 10, after Higgins was fired (he would later be rehired), twelve years after Jackie Robinson’s famed debut, and three years after his retirement, the Boston Red Sox called up 25-year-old Pumpsie Green. He made his major-league debut on July 21, 1959 on the road against the Chicago White Sox. Playing in the Bay Area, Green had played on mixed race teams before. The Pacific Coast League integrated over five seasons between 1948 and 1952. His experiences with the Red Sox were a different beast, one he wasn’t ready for. Pumpsie wasn’t allowed to eat or sleep with his Boston teammates. He almost didn’t have anyone to play catch with before games, until Ted Williams stepped up. Williams warmed up with Pumpsie every day. Celtics legend Bill Russell also lent a hand in helping the young ballplayer transition. Russell gave him advice and frequently invited him to dinner. While Earl Wilson would make his debut for the Red Sox a week later, Green’s early Boston tenure was an isolating experience.

On August 4, 1959, he finally made his debut at Fenway Park against the Kansas A’s. He was the leadoff hitter, hitting ahead of Ted Williams, and he played second base. The crowd to see Boston’s first Black player was much larger than usual and African-American spectators showed up en masse. There were so many of them, that a section of center field was roped off for them.

“It seemed like I was lightheaded,” Green recalled in 2009, “because they were screaming and hollering. Boy, I just don’t know. So I went and got my bat, and on my way up to home plate, the whole stands, blacks and whites, they stand up and give me a standing ovation. A standing ovation, my first time up! And the umpire said, ‘Good luck, Pumpsie,’ something like that.”

Green has lived his life reluctantly accepting his place in history. He was 13 years old when Jackie broke the color barrier, and he never expected nor wanted to be on the path started by him. During his time with the Red Sox, Pumpsie was isolated and alone. None of his teammates had a relationship with him outside of practice and games. In March of 1959 Boston Globe writer Milton Gross described the isolation: “From night to morning, the first Negro player to be brought to spring training by the Boston Red Sox ceases to be a member of the team he hopes to make as a shortstop. Segregation comes in a man’s heart, residing there like a burrowing worm. It comes when a man wakes alone, eats alone, goes to the movies every night alone because there’s nothing more for him to do and then, in Pumpsie Green’s own words, ‘I get a sandwich and a glass of milk and a book and I read myself to sleep.’”

In the decades that followed, Pumpsie’s views on his place in history began to change.  “When I was playing, being the first Black on the Red Sox wasn’t nearly as big a source of pride as it would be once I was out of the game. At the time I never put much stock in it, or thought about it. Later I understood my place in history. I don’t know if I would have been better in another organization with more Black players. But as it turned out, I became increasingly proud to have been with the Red Sox as their first Black.”

In his first at-bat in front of the home crowd, Pumpsie hit a triple to left-center field, high off the Green Monster. The crowd roared. He received a standing ovation. In his words, it went like this: “So he came in there with a slider out over the plate. I put a good swing on it and I hit the s— out of it, and the ball went high off the left-center field fence and I slid into third base with a triple. And the people, especially the people in center field, they went absolutely out of their minds.” The Red Sox went on to win that game 4-1. Green considers it to be his greatest Fenway memory.

Today, Pumpsie Green lives a quiet life away from major league baseball in his hometown Northern California. His playing days are long gone. His health has started to decline. His playing career is now mostly a footnote in baseball history. Pumpsie deserves more than what baseball has given him. He deserves the spotlight he was reluctantly pushed into all those years ago.

You need to be logged in to comment. Login or Subscribe
CoachK
A great read for me. It was right around his first game that I started collecting Topps Baseball Cards. I think I remember the card with Pumpsie taking a knee and I think holding a bat. Yes, he deserves a day in the sun at minimum. Interesting leading off and Williams hitting 2nd in that lineup. Williams was more than a war hero.
Reply to CoachK
brewerstt
Agreed, glad to read this. Heartbreaking, the crap he had to suffer, and millions of others in less public circumstances. And so, so stupid, that baseball and most other aspects of society elevated such exclusion to the very highest priority, above winning in sports, and any other supposedly primary objectives, above justice, above religious principles, above intellectual integrity.
Reply to brewerstt
Michael McKay
Thanks for sharing -- as a Red Sox fan and Boston resident, I despise the rascist history of the franchise, stemming top down from Tom Yawkey. Times have thankfully changed here, but the history deserves to be remembered
Reply to Michael
Tony Mollica
Thanks for the wonderful article! I can only imagine how difficult it must have been to have been isolated like that.
Reply to Tony
Fred Bellemore
Thanks for a great article. I only recently realized that Pumpsie's younger brother is Cornell Green who had excelled (multiple Pro Bowls) in the secondary for the Tom Landry's Cowboys for 10+ years in the 60s-70s. Cornell had only played basketball (quite well at Utah State) up until the time the Cowboys made him a cornerback, at a time when the NFL had essentially a quota on the number of African-Americans per team (which hastened the AFL gaining parity in less than a decade).
Reply to Fred
MARK WILLIS
My heart goes out to the guy. I'm a white guy who grew up in the suburbs in Ohio, but I went to work right out of college in Boston - actually up on the North Shore in Salem. I recall working with people at a Fortune 500 company, mostly white and educated. I was amazed at the casual racism I'd hear at the lunch tables in the cafeteria, awful black jokes told without a blush. This was in the 80s, and the garbage I'd hear said about Ellis Burks and other black players on the Sox just made my stomach turn. Boston was an awfully racist place even then, I can't imagine how bad it was for this guy in the 50s.
Reply to MARK
Robert Grace
A belated thank you for this wonderful piece. I was reminded I hadn't read it yet when I saw a headline today -- Pumpsie Green passed away yesterday at the age of 85. Seems like he was a heck of a man. (And he must have been fast -- a triple to left in Fenway? Not bad for a first MLB hit!)
Reply to Robert