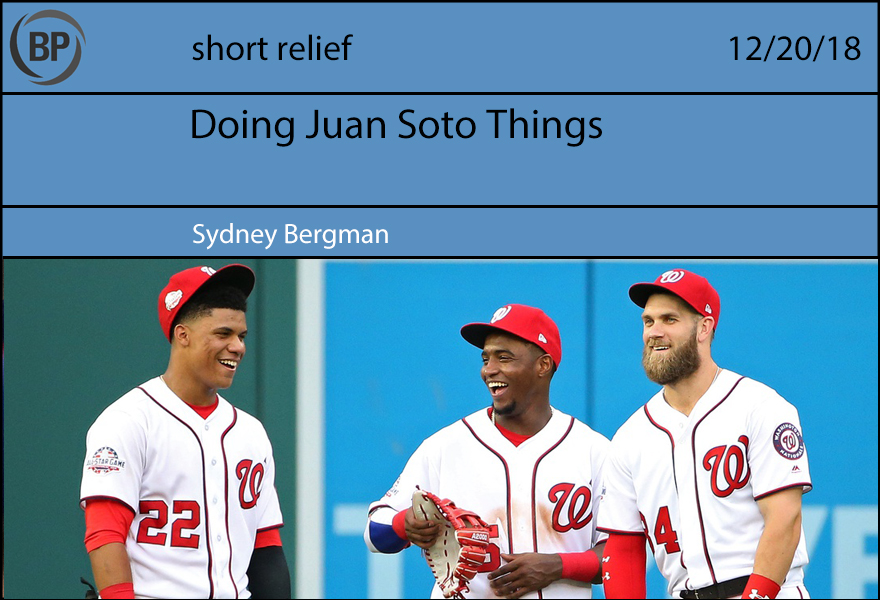 Soto on Acuna Jr.: "He's really impressive in what he do. I just watch him and have fun with that. I just tell him keep it up and never give up. Everything he do is fun. I keep watching him. He's amazing guy."

Soto on Acuna last night: "He's really impressive in what he does. I just watch him and have fun with that. I just tell him keep it up and never give up. Everything he does is fun." https://t.co/j7kWCJxqgL

Once in Greece, I asked for a “Wednesday” (τέταρτη) kilo of feta instead of a “quarter” (τέταρτο). The lady behind the cheese counter in a grocery store in suburban Athens looked at me for a minute, told me my Greek wasn’t very good, and then asked me to repeat what I wanted.

I’ve told that story a few times since, even though it happened more than 10 years ago, mostly because it was an anomalous experience in a country where my mistakes in learning Greek were treated with almost universal patience and good humor, minus one judgmental cheesemonger.

It’s not surprising, though. We treat the choice to be bilingual — known as “elective bilinguiality” — as something cosmopolitan, whose errors should be met graciously. After all, it’s not like I had to speak Greek when most people spoke English. But that isn’t how we treat obligate bilinguality — when you speak a second language not because you want to, but because you have to.

During a recent Braves-Nats series, Juan Soto, noted teenager, was interviewed about Ronald Acuña Jr., noted recent teenager. Two Nats’ beat writers, Chelsea Janes and Jamal Collier, reported what he said, with one crucial difference in grammar: “do” versus “does.” (It should be noted neither properly tilde’d Acuña.)

This probably won’t be the last time Juan Soto makes a grammatical error in speaking with the media. Players, regardless of their first language, make them all the time. And the media will likely have a lot to say to Soto for the next 20 or so years: Soto’s having the best start of any teenager in MLB history. He seems to have an almost preternatural understanding of the strike zone, spitting on borderline pitches with LaRochian skill. His defense and mobility have come a long way — not bad for a converted pitcher who, in his own words, wasn’t very good. He’s also worked hard to learn English incredibly quickly and has chosen to give interviews in English rather than through an interpreter.

A lot has been written about MLB finally (finally finally) providing interpreters and translators for its non-L1-English players. (L1 refers to a speaker’s first language.) I’m using L1 English, though there have been a variety of terms used for people whose first language isn’t English, including “limited/non-English proficient”; “English as a second language”; “nonnative speaker”; etc. The current term used in education is “English learner,” though this term is clearly an imperfect fit. After all, everyone is inherently an English learner.

One of my favorite phrases about language acquisition is that no one is a native speaker of academic language. It acknowledges that everyone — L1 and non-L1 English speakers — all have to learn the formal “high” English that populates academic discourse and complex texts.

No one is a native speaker of baseball language, either. Baseball is chock full of technical vocabulary: Nobody’s born knowing the difference between a knuckle curve and a knuckleball, or a pop-fly from a fly-out. Some of us learned those things when we were too young to remember learning them and go through life believing we’ve always known them — the way few L1 English speakers can remember learning the difference between when to use “do” and when to use “does.”

Carlos Beltrán has said that reporters quoting him verbatim made him less likely to talk to them without an interpreter present and less likely to talk with them at all. Other players, even players who are bilingual, speak to the media only through interpreters because they want to ensure they don’t look “dumb” in the process — for making errors that would likely be smoothed over if they were L1 English speakers.

I’m not writing this to put Chelsea Janes, whose coverage I admire and whose Twitter mentions I don’t envy, on blast. It’s to point out that we can unthinkingly perpetuate misconceptions about non-L1 English speakers even when our own mistakes would be ignored or treated as the forgivable mistakes they are. The point of language is to convey meaning, and if meaning is clear, the particulars shouldn’t necessarily be emphasized, particularly in conveying people’s speech in writing.

I’m looking forward to the next (tfu tfu tfu) 20 years of watching Soto play, and I’m looking forward to whatever takes he has on baseball, which thus far have been delightful. I don’t know whether he cares about being quoted verbatim — and I don’t know if he’d be comfortable saying if he didn’t appreciate it. But what I want is for Juan Soto to do Juan Soto things, and to talk about doing Juan Soto things, and to encourage future players, regardless of their first language, to do the same. 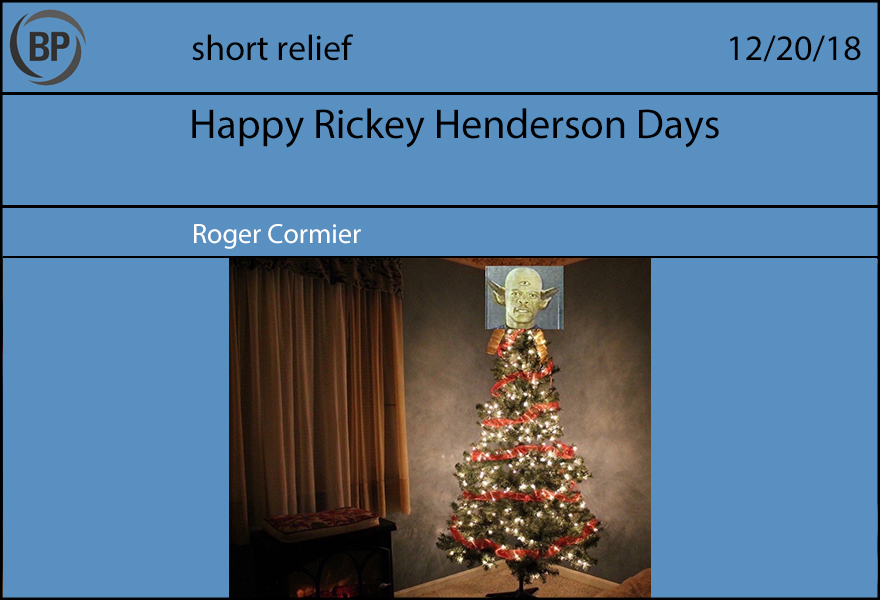 We don’t celebrate Chanukah, Christmas Day, Kwanzaa, Boxing Day, Festivus, nor Honda Days in this house. December 25 is the anniversary of the birth of the all-time stolen base and runs scored champion, Rickey Henderson.

We go around the room and recollect our favorite Rickey Henderson stories. Or just facts that Rickey Henderson himself confirmed or come from verifiable sources. Even the completely true tales show just how wonderfully unique he was as a player.

Like how in 1982, Rickey Henderson framed his $1 million signing bonus instead of cashing it. You could also go with an earlier version of the story when it was $100,000, and Rickey Henderson’s explanation was that he was waiting for the interest rate to go up. Either version is good.

There was the time when Rickey talked to himself in the dugout, in earshot of his A’s teammates, saying, “’I don’t know who’s inside Rickey’s body, but he better get out because the guy in there doesn’t like day games, he only shows up on day games, so he better get out.”

Or when Rickey fell asleep with an ice pack on his foot, got frostbite, and missed three games. Or when he responded to Jayson Stark’s questions about his leadoff counterpart the day before the 1993 World Series with, “Man, why you trying to compare some other guy with Rickey? There’s only one Rickey.” It almost doesn’t matter who the other guy was. (It was career-year Lenny Dykstra.)

The two stories I tend to share are from 1999. The Mets on a July night that year played as the “Mercury Mets” in a misguided attempt to rip-off the Mariners’ “Turn Ahead the Clock” promotion. Rickey was depicted on the Shea Stadium Diamond Vision as a three-eyed creature with Dumbo ears. It was the least imaginative depiction of an extraterrestrial possible. Ed Wood would not have used the design for Plan 9A From Outer Space. The New York Times was there for Rickey’s take:

‘‘Funny?” he said. ”Mine was funny enough. I don’t know where they came up with my picture. I know my ears ain’t that big. Before the game started, the umpires were laughing at me. And then when I lined out to short” — Abraham Nunez had to leap for the ball — ”they were saying I hit the guy in his third eye.”

Hernandez was laughing so hard behind the plate, he had to close his eyes. Said the third-base umpire, Joe West, ”I told Rickey that was the best he’s ever looked.”

(Of course Angel Hernandez and “Country” Joe West were there. The future is horrible.)

Here you can see Rickey acknowledging Joe West’s brutal zinger and saying the name of Marc Maron’s podcast one decade before it debuted:

And here is how Rickey a few months later dealt with a Cincinnati heckler during the one-game playoff between the Mets and the Reds:

Rickey knew the 5-0 lead in the 6th was insurmountable. He knew he was going to end up on top that night, like at the end of the 1989 and 1993 seasons. Rickey Henderson figured he would have some fun while building his Hall of Fame resume and generate a lot of myths that make us smile.

Except in Cincinnati. They tell Joey Votto stories instead. To each their own. 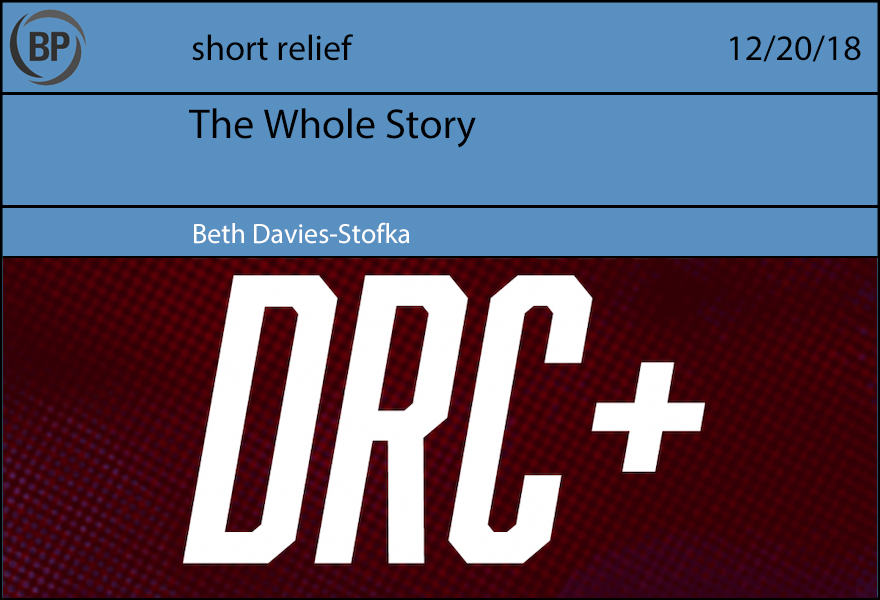 There are times when the experienced eye can look at a statistic and ask, “What are these numbers not capturing?” This week at work I had to analyze six years of student data to locate and identify high-performing courses. With the help of my husband, we spent an afternoon crafting a number of Excel algorithms to reach a performance metric. One after the other, I was dissatisfied with the results. The data just wasn’t telling me what I instinctively knew. What was being missed? Even though we finally figured it out, my husband says that I never actually told him what I wanted. That’s because it came from instinct. It came from the years I’ve spent accumulating an intimate understanding of classrooms.

Once upon a time, baseball analysts used two chief statistics to measure performance: ERA for pitchers and batting average for hitters. Comparing a pitcher with an ERA of 1.15 to another with an ERA of 4.00, it would seem obvious that the first one was the better pitcher. But we knew things were missing and that the numbers didn’t tell the whole story. Maybe the pitcher with the higher ERA was always brought into bad situations. Or maybe he had only pitched two games. Or maybe he played for a team that had the worst shortstop in the league. There were all kinds of stories that ERA didn’t account for, so we developed new algorithms, data metrics that told better stories. We developed DRA, for example, to tell a better story about the pitcher who played with a bad shortstop.

Like Sherlock Holmes, we continue to find and tell richer, more complete stories by scrutinizing the data. Baseball Prospectus’ new DRC+ stat is another example; it comes as close as we ever have before to giving hitters their due. That’s why data is such a rich resource for the “human element” in baseball. As long as we continue noticing stories that are not being told, we will continue developing new metrics in order to tell those stories. Metrics are not an alternative to the human aspect of baseball; they are the clues.