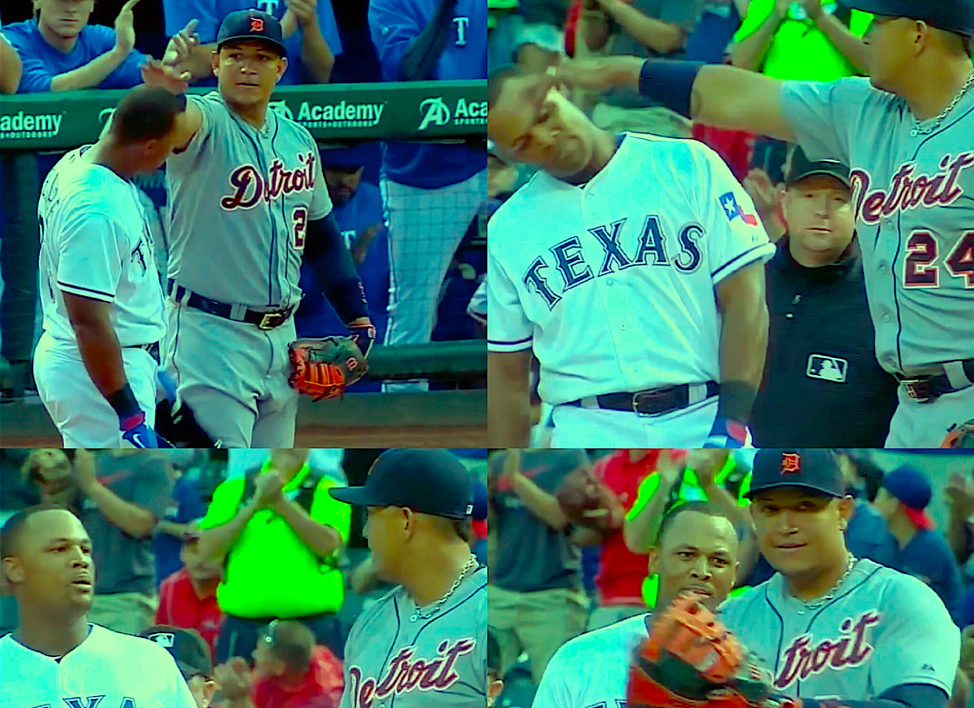 Adrían Beltré did not like having his head touched. Retirement probably does not change that.

He’s said he does not know why he has this “discomfort.” Or, he never wants to publicly reveal some deep, dark secret.

An impossibly young Adrían was the friendliest kid in Santo Domingo. One typically beautiful morning, the local mail carrier gave Adrían a friendly pat on the noggin. The man suffered a fatal heart attack moments later. Adrían never forgave himself, even though the guy was very old, had a terrible diet, and cardiovascular issues ran in the family.

Sometime between 2005-2009, Felix Hernandez noticed Beltré did not like getting touched on the head. He assumed it was because of the waves in his hair. Beltré admitted to Felix one day that he just …  did not like it. “And after that, he tried to do it all the time. It was stupid of me,” Hernandez told some of Beltré’s new teammates in Boston, and by the time Adrían began his final eight years with the Rangers it was the world’s worst-kept secret.

Poor Beltré was trying to acknowledge the crowd and his fellow players for recognizing his 2,500th career hit. Miguel Cabrera messed with him, then applauded so Beltré could not truly retaliate. This little play of a bully and their victim moments before the teacher returns their gaze to the class from writing on the board goes on every single weekday.

Here is Adrían considering killing Cabrera in broad daylight, in front of thousands of witnesses, then consuming his heart.

It was okay if you hit him on the head while he was wearing a helmet. Probably hurt though.

We All Suffer in Silence

Beltré was a Dodger from 1998-2004. Surely he was given a tap on the head a couple of times. There was a close call in 2003. You can spend hours trying to discern if Beltré was in immediate immense inner pain or not.

You Can’t Take It With You

Beltré’s prevention plan was leaving his helmet on his head for as long possible. If he hit a walk-off home run, he quickly sought sanctuary in an empty dugout.

When his teammates were on to this and were ready to rip his helmet off, he improvised.

Battle of Who Could Care Less

I care. It made Beltré more accessible to us nobodies. We all have at least one unexplainable phobia. Guy has 3,166 career hits, hit for the cycle three times, and won five Gold Gloves, and we have not. But we both have … this.

His Hall of Fame plaque:

Adrían Beltré put up outstanding individual statistics while never being boring. He remained respected throughout the league despite his occasional skylarking, i.e. moving the on-deck circle during a cute #umpshowness in an 18-6 game. He once got ejected on purpose because he did not want to play all nine innings of a spring training game. The same manager who tried to make him play that full exhibition game literally went down on his knees begging Beltré to sit out one regular season game. That, folks, is Adrían Beltré Pérez.

The Year is 2068. The Setting is the Baseball Hall of Fame.

Oh, he was the dude who didn’t like getting touched on the head.  It was his kryptonite or something.

You make it sound like he was a superhero.

Don’t be so dramatic … but yeah, he wasn’t too bad.

It looks like he was pretty good at baseball.

I guess. Why else would I remember him?