Umpire Laz Diaz, who debuted June 23, 1995 (not long before Bryce Harper’s 3rd birthday) made an ass out of himself Friday night at SunTrust Park in Atlanta.

The Braves were taking on the Nationals without issue for the first four innings. Then things took a turn.

During the home half of the fifth, Harper, who was way out in center field, apparently reacted the wrong way to a strike call by Diaz, who walked from behind the plate with both arms outstretched. He walked nearly onto the infield grass.

Nats manager Davey Martinez got involved, yelling at Diaz from the dugout, essentially telling him to calm down and worry about the game.

Home plate umpire Laz Diaz, totally normally, screamed at Dave Martinez to stop Bryce Harper from doing *something* in center field. Harper’s silent responses of grabbing his cup and a subtle head shake is why he’s a perennial All-Star. pic.twitter.com/SE7EEEhAqD

Of course, things didn’t end there. When Harper was at the plate in the seventh inning, Diaz decided to act like a toddler and call an obvious ball a strike.

Pitch No. 4 (called a strike by Diaz) is the one that set Harper off. pic.twitter.com/sg6lTuSGog

To his credit, Harper took the high road in his postgame remarks:

Martinez made a good point in his statement: “Umpires are supposed to be non-confrontational. They’re supposed to uphold the peace on the baseball field.”

He’s exactly right. Umpires are not supposed to react like big babies because a player might have reacted badly to a call. Incidents like this shouldn’t be tolerated by Major League Baseball. Maybe instead of focusing on the pace of play and trying to change the way the game is played, Rob Manfred and Joe Torre could look at how umpires behave during games. This isn’t the first time something like this has happened, and until the league does anything about it, the behavior won’t stop.

Justin Verlander is 35 ½ years old, he’s thrown about 2,700 innings in his career and he seems to be pitching the best he’s pitched in his career. Interesting, eh?

It was more of the same Sunday afternoon when Los Astros took on Los Diamondbacks at Houston. When Verlander struck out Jon Jay on three pitches to open the game, it was a sign of more dominance to come.

Verlander finished seven strong innings, giving up a run, three hits and a walk, striking out 11. The one blemish was a home run by David Peralta, his 28th. It was also Verlander’s 28th allowed.

The Astros extended their lead in the AL West to 4 ½ games on Oakland.

How about some AL Wild Card shenanigans?

Oakland took on the Rays at Tropicana Field, dropping two of three. The A’s are 1 ½ behind the Yankees for the AL Wild Card, and not in any danger of losing their place in the postseason. There’s also a strong chance they’ll host the game at Oakland.

The Yankees lost two of three to the Blue Jays and face the Red Sox next. Boston can win the AL East at Yankee Stadium. They’re 11 ½ games up and their magic number is 2. If Seattle loses two more games, they’ll be eliminated and the Yankees and A’s will make the playoffs. 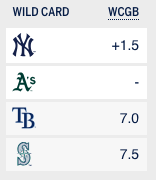 The NL Wild Card race is living up to the wild adjective.

Adam Wainwright and the Cardinals shut out the Dodgers 5-0 on Sunday night to put St. Louis into in a tie with L.A. for the second NL Wild Card spot. Wainwright pitched six strong innings, limiting the Dodgers to two hits and striking out nine.

The Dodgers fell a half-game behind the Rockies in the NL West—and guess who’s playing head-to-head this week? Yep. Those schedule makers were pretty smart putting all of these in-division series in mid-September.

The Rockies lost two of three to the Giants, who were on an 11-game losing streak (i.e. winless in September) before series. In fact, the Rockies swept them in Colorado from September 3-5.

Again, things are getting interesting. This is the time where some teams, like the D-backs could fall out of both races—or they could play themselves right back in. 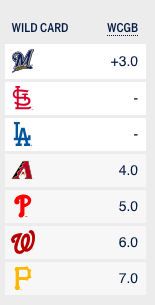 Didi Gregorius broke his own record for home runs by a Yankees shortstop this weekend against Toronto (26). He also did this:

With a series against the Astros starting Monday, it’s looking more and more likely that Seattle will be missing the playoffs again. They haven’t gone since their 116-win season in 2001, when they lost the ALCS in five games to the Yankees. As for the Astros, their magic number is 9.

There are a few important series in the National League that begin on Monday night:

The Cardinals play the Braves at Atlanta in a series that could have NL Wild Card implications and NL East implications as well. Atlanta is 6 ½ games ahead of Philadelphia. A couple of Braves wins, coupled with Phillies losses to the Mets, could wrap up the NL East race soon. St. Louis also would like to win a few games now that they’re tied with the Dodgers for the second Wild Card.

The Diamondbacks are starting a series with the Cubs. If Arizona wants to get back into the race for the NL West title or the NL Wild Card, they’re going to need wins. It’s also an important series for the Cubs, who are only 2 ½ games up on Milwaukee in the NL Central.

Don’t you love baseball in September? I sure do.