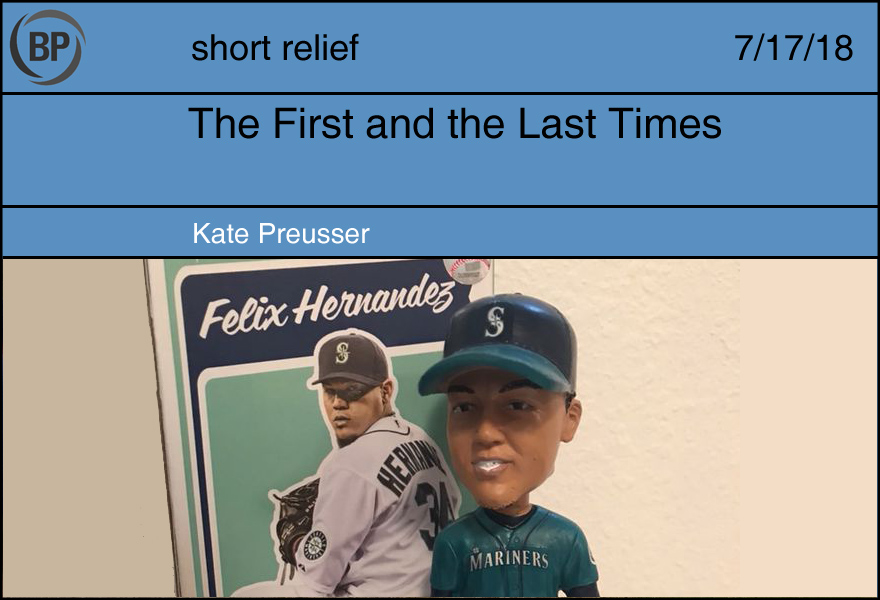 My grandfather passed away a while back, leading to the sad but necessary chore of cleaning out his apartment. Beyond the willed items, this was mostly wrapping up the odds and ends of everyday life: reuniting an odd silver spoon with the family set, deciding whether or not the yarmulke he wore at a relation’s bar mitzvah was worthy of return, dividing up his tools and golf clubs and deciding who would get, or want, the ukulele.

Someone left a Félix Hernández bobblehead for me and I took it, less because I actually wanted it and more out of a sense of duty, not wanting to consign it to the complex’s “treasure shop,” a moderately ghastly on-site collection of items spurned by relations doing the same work we were doing, the sorting and stacking and disposal of a life.

I remember when my grandfather got this bobblehead: September 13, 2014, on a night Félix was pitching. Instead of King’s Court it was “Night Court,” and we all got black t-shirts at the gate. “Isn’t that nice,” my grandfather said, and handed his over to me immediately. Having just moved back to Seattle, it was the first time I’d ever been to a game with him at Safeco and his first game in years.

The Safeco staff was generous and indulgent, sending us over to Guest Services to get him a “first game” certificate and although it certainly was not, he was delighted by the attention. He came away proudly clutching a bobblehead alongside his certificate, face radiant with joy. I was torn between feeling happy for him and a shameful flash of jealousy, that a few minutes of attention from a stranger could make him beam so. I hadn’t realized then just how far down his world had shrunk: apartment, dining hall, mailroom, apartment. My grandfather, a world traveler who lived in the Philippines during his early years, who sailed boats through San Francisco Bay into the Pacific, who walked through Okinawa days after the war ended, now lived in a circle with a diameter of less than a thousand feet.

I didn’t know then that this would be the last game I ever attended with him, watching the Mariners lose to the Athletics 3-2, stabbing one of the final nails in the coffin of their playoff hopes for yet another year. As I wheeled him out I sang the song every Mariners sings at the end of every season, how the team was really poised to make a run of it in 2015, how we’d come back and watch them win. My grandfather turned the bobblehead around in his hands and didn’t answer. I thought he was disappointed about the game, a heartbreaking late-inning loss, and was surprised when later the Félix bobblehead, a memory of that night, was given pride of place in his bedroom, propped atop the first-game certificate.

I didn’t know then, but I think he did.

I left the bobblehead in a box of stuff I’d taken from my grandfather’s for a few weeks, finally digging it out the other day from beneath some old sweaters, a silver lamé evening bag, and a set of tigers-eye cufflinks I thought I could make into earrings. As I pulled it from the box I thought of the way my grandfather had clasped the box containing the bobblehead as if it were a priceless treasure, more like a boy than an old man on his last trip to the ballpark. Now it stands in my room. Every time I look at the box I think of my grandfather, and how you never know when the last time will be, and that sometimes it’s okay to lie and pretend it’s your first time. 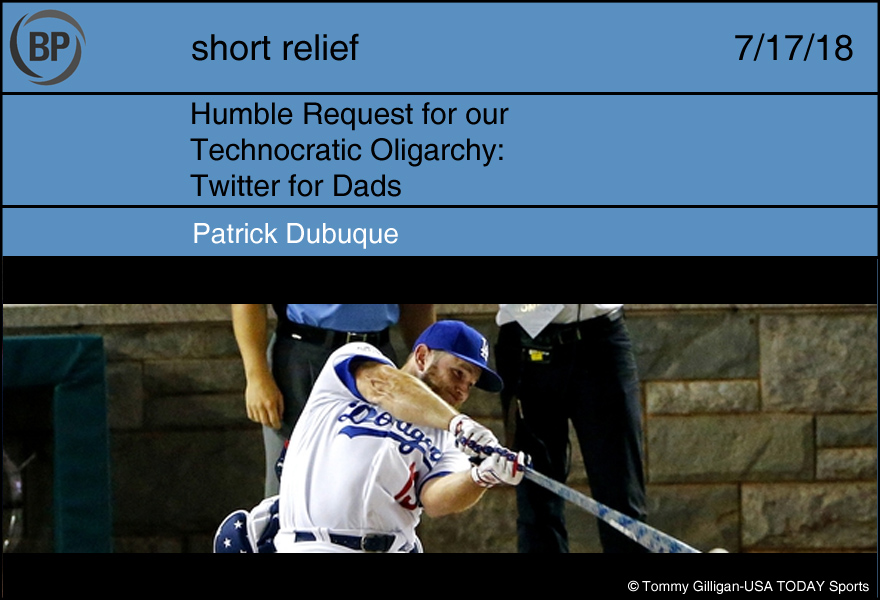 I did not watch the Home Run Derby. That’s not because I hate it; I like the Derby just fine, especially with the volume down. I did not watch it because I spent that time watching my two-year-old son lick cat hair off his own shirt.

(There are three levels of child conflict: the first, and most common one, is when you tell them to stop doing something. Sylvie, please stop trying to drink directly from the bathroom sink. Felix, do not hit the escape key on Julie’s keyboard. These are still tiny failures, because the ideal parent (my wife) will have visualized every contingency and neutralized it.

The second level of child disaster is the one where you put your arm out. When the boy is across the room, and you look at him, and he looks at you, and you look at the ice cube in his right hand, and he sees you looking at the ice cube, and where the hell did he get an ice cube but never mind that’s not important and there goes the ice cube, into the mouth. You have time to raise your arm, like someone about to get vaporized by an atom bomb.

The third level is where you don’t notice the trap until it’s already been triggered. Cat hair? Really? Look… whatever. You win. I mean, the human mind can only plan for so much.)

But non-parents have to understand: every moment you spend with your child is a treasure you’ll never return to, and that you’ll spend the rest of your life reflecting on wistfully, but it’s also extremely boring. Especially with boys, who spend their afternoons crashing plastic shopping carts into plastic workbenches, over and over. This is why we need Twitter. Televisions are downstairs; radios are conspicuous. A surreptitious phone with Twitter going can link us to a world where people are doing actual, meaningful things.

But the problem with Twitter, especially during a sporting event, is that it’s mostly this:

max muncy is the worst

The purpose of this is not to mock Mr. Moser, who is using Twitter for its intended purpose: to share experiences with like-minded individuals. However, to my particular subset of alienated Dads, this tweet fails to provide the necessary details.

What we need is a service where boring people tweet exactly what is going on. Think of it as like a color analyst, but someone who actually talks about the events on the field, play after play. That way we can stop, extract the cat hair from our child’s mouth, and return to the action, such as it is. It’s not the same — trust me, it can’t be the same — but at least we get to know what we’re missing.

Make it happen, Silicon Valley. I know it’s possible; I see people do it for spring-training games all the time. Thank you, and good luck getting your venture capital. 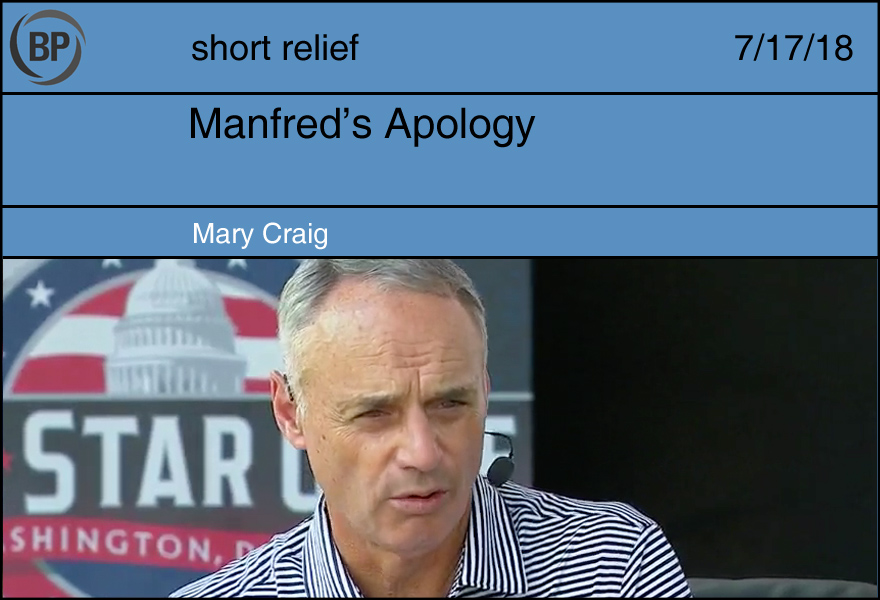 The following is a transcript of Rob Manfred’s 2018 Town Hall.

How you, fans of baseball, have been affected by my accusers, I do not know. For my part, even I nearly forgot myself because of them, so persuasively did they speak. I wondered most at one of the many falsehoods they told, when they said that you should beware that you are not deceived by me, since I am a clever speaker. They are not ashamed that they will immediately be refuted by me as soon as it becomes apparent that I am not a clever speaker at all. But leave aside the manner of my speech and apply your mind to this: whether the things I say are just or not.

It is just for me to speak in defense against the false charges against me.  So let us take up from the beginning what the accusation is, from which has arisen the libel against me. What did the slanderers say to slander me? Their sworn tweets must be read: “Rob Manfred does injustice and is meddlesome, by failing to investigate the problems of the past and the present, by making the stronger game the weaker, and by teaching others these same things.” But in fact none of these things is so; and if you have heard from anyone that I attempt to ruin the game and make money from it, that is not true either.

I, fans of baseball, am now far from making a defense speech on my own behalf, as someone might suppose. I do it rather on your behalf. For if you fire me, you will not easily discover another of my sort, who—even if it is rather ridiculous to say—has simply been set upon MLB by the owners, as though upon a great and well-born designated hitter who is rather sluggish because of his great size and needs to be awakened by some gadfly.

That I happen to be someone of this sort, given to MLB by the owners, you might apprehend from this: it does not seem human, on one hand, that I have been careless of all my own things and that for so many years now I have endured that the things of job be uncared for. If I was getting something out of this, and if I was receiving under-the-table pay while I exhorted you to these things, it would be somewhat reasonable. I, for my part, will offer great proofs of these things for you—not speeches, but what you honor, deeds.

Let me tell you a passage of my own life. When I first held office, I was tasked with picking up the fragments of fair play that had been left behind in the steroid era. I made up my mind that I would run the risk of persecuting those culpable as a group not individually, having law and justice with me, rather than take part in your injustice because I feared unemployment or ridicule.

I have been always the same in my actions, public and private. I do not converse with those who pay only, and not with those who do not pay; but anyone, whether he be a billionaire or millionaire, may ask and answer me and listen to my words; and whether he turns out to be an old school or new school fan, that cannot be justly laid to my charge, as I never taught him anything.

Well, baseball fans, this is nearly all the defense I have to offer.