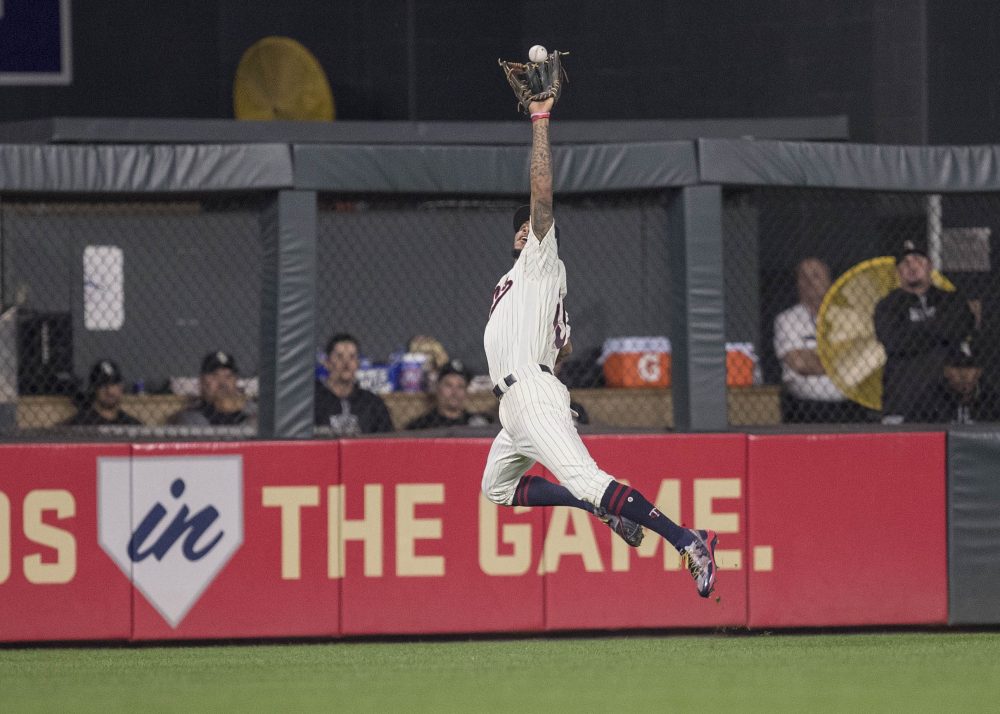 As last season progressed, Byron Buxton blossomed into a superstar. Formerly limited by his poor approach and porous swing, Buxton found his groove at the plate and the former two-time BP no. 1 overall prospect laid waste to the league over the final two-plus months, hitting .314/.359/.553 with 12 homers and 15 steals in 62 games after the Fourth of July.

Leavened by that offensive improvement, his value reached an elite plateau. It wasn’t solely his surging production at bat that fueled his breakout, though. What we witnessed down the stretch in 2017 was the all-around maturation of an athlete so gifted that the only person capable of neutralizing him is the man himself. In a number of ways, Buxton has learned how to use the unmatched tools with which he has been blessed.

Firstly, that meant shoring up that entirely backward approach. Brooks Baseball breaks the pitches batters see down into three categories: Hard, Breaking, and Offspeed. In the first half of 2017, Buxton swung at 67 percent of Offspeed pitches, 48 percent of Breaking pitches, and 41 percent of Hard pitches. That’s simply not what any hitter should be doing. That Buxton was doing it was indicative of how far off track he was. He often looked lost and overmatched at the plate. A batter with pitch-recognition skills as poor as the ones Buxton displayed early in 2017 is doomed.

What makes special baseball players special, however, is that they can make adjustments and shore up weaknesses in ways other players can’t. In the second half, the 23-year-old Buxton cut his swing rate on Offspeed stuff down to 56 percent, swung at almost half of the Hard stuff he saw, and only chased Breaking pitches 41 percent of the time.

Whether first-year hitting coach James Rowson and the Twins’ field staff found a way to fix Buxton’s pitch-recognition paradigm, or whether they fixed his mental approach such that he was more prepared to anticipate pitch selection and attack only the offerings he wanted, Buxton got right. He was more aggressive, not less, but because he knew what he was swinging at, he made much more contact on the pitches that had given him the most trouble early in the season. 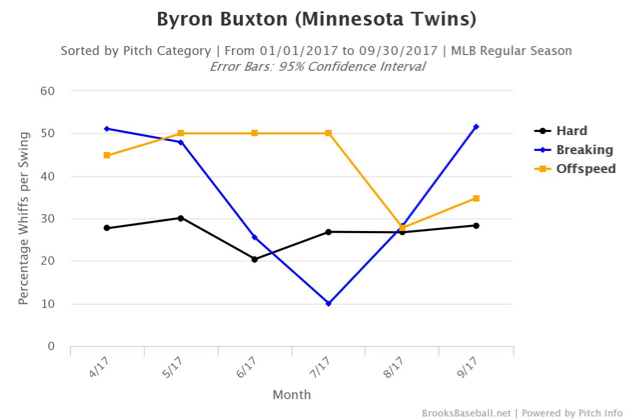 That wasn’t the only significant, veteran-level adjustment Buxton made, though. He also made himself a better defender, by embracing a bit of new conventional wisdom: that outfielders serve only their egos by playing shallow. Of 31 qualifying center fielders in the first half of 2017, Buxton played shallower than all but four, with an average starting distance of 311 feet from the plate. In the second half, however, he played deeper than the median center fielder, at 318 feet from home plate. (There were 27 second-half qualifiers, of whom Buxton played 12th-deepest.)

Buxton is a great defensive center fielder no matter what, and will run down roughly the same percentage of the fly balls and line drives hit toward him no matter where he positions himself. Indeed, the Twins (this is not solely Buxton, but so be it) allowed a .337 BABIP on fly balls and line drives to center field in the second half, almost precisely level with the .336 figure they allowed in the first half. They allowed a .608 slugging percentage on those batted balls in the second half, though, down from .671 in the first half. Playing deeper means that more of the hits a center fielder steals from opposing hitters would have been doubles and triples, rather than singles. Buxton is even a threat to pull back a would-be home run now and then.

This is doubly important in another way. Buxton plays hard. He’s the fastest player in baseball, perhaps, but whereas Dee Gordon and Billy Hamilton come by their speed easily and can accelerate and decelerate rapidly, Buxton is long-levered and (though svelte) a bit of a freight train. He’s already had some scary collisions with outfield walls. He’s run into teammates on pop-ups. He and a marginal outfield prospect each came away much worse for wear after a high-speed, sliding crash in the gap in the minor leagues a few years ago. The risks of all these kinds of collisions and injuries are lessened by playing a deeper center field. The occasional bloop single is a tiny price to pay for the bilayered benefits of backing up.

The only other way Buxton can increase his impact on the game is by becoming an elite base-stealer, and he did that late in 2017, too. After returning on August 1 from a two-week disabled list stint, he stole 13 bases in 13 tries over the final two months. Given that (because of his power and the success of the Twins’ lineup over that span) Buxton only had about 45 chances to steal a base over that period, his rate of converting those opportunities to steal attempts was right up there with the game’s elite thieves—and obviously, he could have been even more aggressive.

This spring, he’s talked about stealing 50 bases. That seems easily within reach. He’s worked on optimizing the mechanics of his takeoff and on getting more aggressive leads. If that work has the desired effect, Buxton could turn into the most dynamic offensive force in the entire AL Central. That’s still on the table. He’s even exceptional at staying out of double plays. Some of that stems from his place in the batting order, and some of it is about his contact issues, but the fact is that Buxton has grounded into just four double plays in 980 career plate appearances. He’s one of just two players to post two seasons with at least 300 plate appearances and two or fewer double play grounders before turning 24, and the other guy is Joe Morgan.

Buxton should get even more attention than he already receives. When he hit a bunch of home runs at the end of 2016, enthusiasm about it had to be tempered by the obvious issues he was still having with pitch recognition and plate discipline. Those can be inherent, unfixable flaws, and they can derail even extraordinarily talented athletes. Buxton’s second half suggests, however, that he’s able to tell a ball from a strike and a fastball from a changeup, at least often enough to paper over the imperfections in his swing and the lack of refinement in his approach.

He’s also maturing enough to make the most of his speed, in the field and on the bases, without putting himself at undue injury risk. Don’t hedge bets on Buxton. He’s not Mike Trout, and he’s not Joe Morgan, but he’s already answered the biggest questions about his development. He’s a superstar.