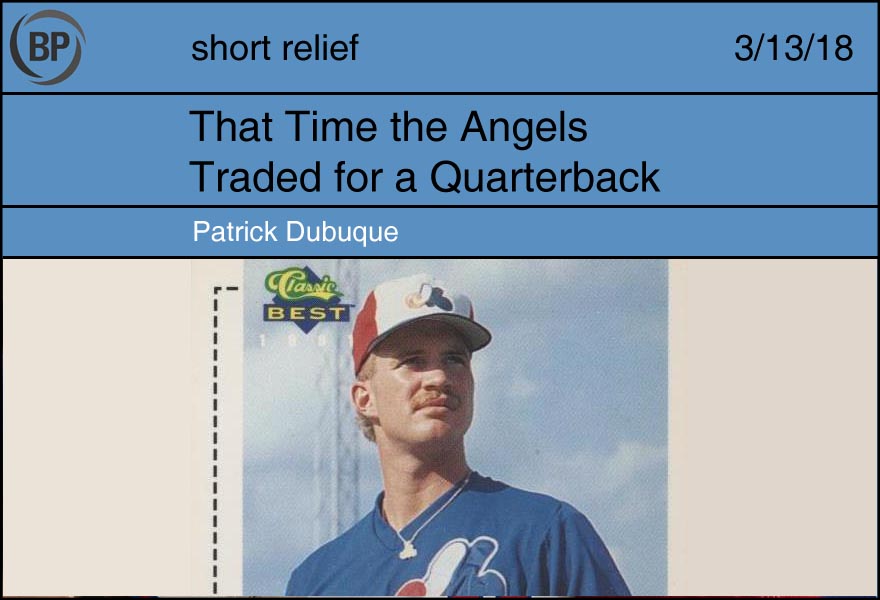 Minor league baseball cards look different than their major league counterparts. Perhaps it’s the youth of the talent, or the inexperience of the photographers; maybe it’s just baseball lacking that last coat of the varnish of seriousness. Minor leaguers make more faces, contort themselves into unnatural positions never seen during play. Often times they are instructed to just pose. This is what a real ballplayer should look like. This is what adulthood is. Look off into the distance.

Jeff Tuss probably wasn’t looking; he was thinking of football. He’d been recruited for both sports, but somehow the 46th-round draft choice, and likely 46 dollars, somehow lured him across the country to West Beach to don the tricolor M of the Expos rookie league. Why not try it, his friends probably told him. You can always go back to school.

The details of Jeff Tuss, baseball player are mostly lost. We don’t know what he threw or how he threw it, or what kind of person he was or what he lived like. The Expos converted him to reliever after two years, but his career ERA in the minors was 3.05, with two strikeouts per walk in the early nineties. Still, as he opened his third season in West Palm Beach, the other path in the road called. He had his agent inform the team that he was planning to go back to school.

The Expos, or someone in the organization, interpreted this as a trade request, so they traded him. The lucky recipients: the California Angels, who sent back one Lee Stevens. When the Angels tried to contact their new player, however, there was a problem. Tuss was out touring the Fresno State campus, where he’d already signed a letter of intent. The Angels had traded for a 23-year-old quarterback.

Many famous baseball men were ensnared in the debacle. “I mean, we’ve never traded for a guy who planned on quitting,” said Angels farm director Bill Bavasi. “Then again, we never had a player offered to us who planned on quitting.” (Insert Eduardo Perez joke here.) Whitey Herzog, Angels GM, comes off catty: “It sure is strange, though. It’s the first I heard of something like this. Why the hell would he want to play football now? Oh well, let him go play football. I didn’t expect him to be Walter Johnson, anyway.”

Dan Duquette, who made the trade on the Expos behalf, was equally embarrassed: “It was just a miscommunication. What do you want me to say? The guy retired. We sure didn’t know.”

Tuss threw five passes as Trent Dilfer’s backup, then transferred to Montana and accumulated victories and statistics that escape even the most diligent of statistical websites. It worked out. He emerged with a college degree, a sales job in Arizona, and an idea of what adulthood is, sans photographers. 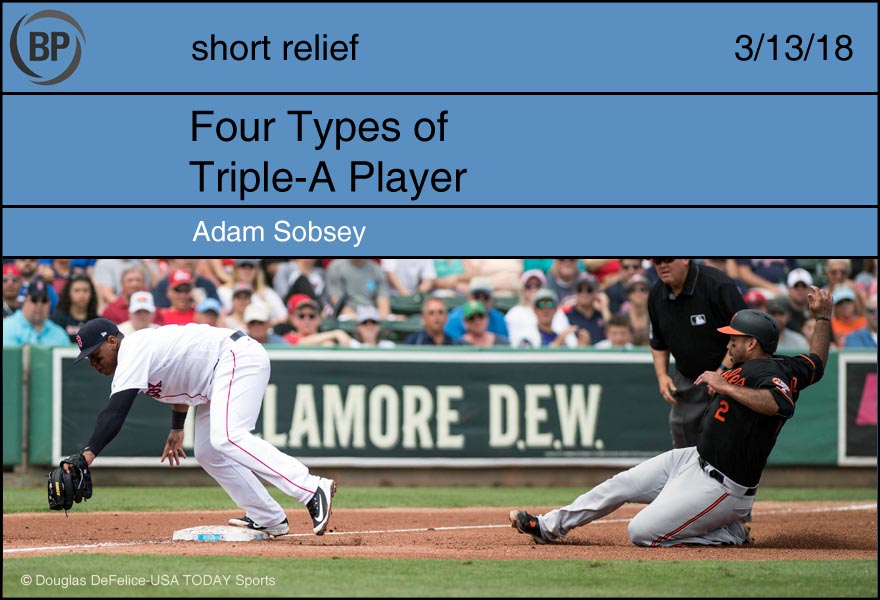 The average minor-league team has only about three to five actual prospects: the exciting guys whose stats people follow and who appear in shaky amateur videos through some netting, on a blog. Some of the rest of the players might become prospects—I’ve watched this happen many times—but most of them are “guys for the prospects to play against,” or, less charitably, “filler.”

We so readily (cat) slobber over prospects that they become weirdly easy to take somewhat lightly, especially because they don’t stick around any given level of the minors for very long. They’re just passing through. After covering a Triple-A baseball team for a while, I got more interested in the other guys, particularly in what to call them. There were definitely “suspects”—you’ve probably heard that term. Suspects even use it on themselves. Those are the guys who might make it to the bigs, or are bouncing back and forth, etc. They’re around the average age of a Triple-A player, 27-ish.

But then there two more types. I decided to name them:

Disrespects. I’ve heard Triple-A managers say that everyone in Triple-A is good enough to play in the major leagues. It’s is a generous sentiment, but it isn’t true. For roughly every big league-bound prospect in Triple-A, there’s a guy who has no shot ever to get the call. He got promoted from Double-A, or even Class A, because of injuries and callups all over the place. There was never much expectation of this guy reaching the level below the major leagues, but the Triple-A bullpen needs a fresh arm today, or the bench needs a warm infielder, and you don’t rush the young prospect through his development. Instead you patch the hole with a Disrespect. Usually he’s sent back to the lower minors in very short order, but if things go his way he could stay for weeks, months, even a whole season or more. This a way of saying that I miss Omar Luna.

Retrospects. They played in the big leagues, maybe even for years. They might be 28 or 29, but their age usually starts with a 3. They are Crash Davis. If they hadn’t gotten badly injured, or had been in a righter place at a righter time, or didn’t have that one crippling flaw, they’d still be big leaguers. Retrospects are quality competition for the prospects and suspects to play against—a legitimate test. Sometimes, three guys get hurt and retrospects get to go back up the big leagues. But soon they return to Triple-A, a little older and even wiser, the wisest men in baseball. Triple-A would be an empty, empty place without them. 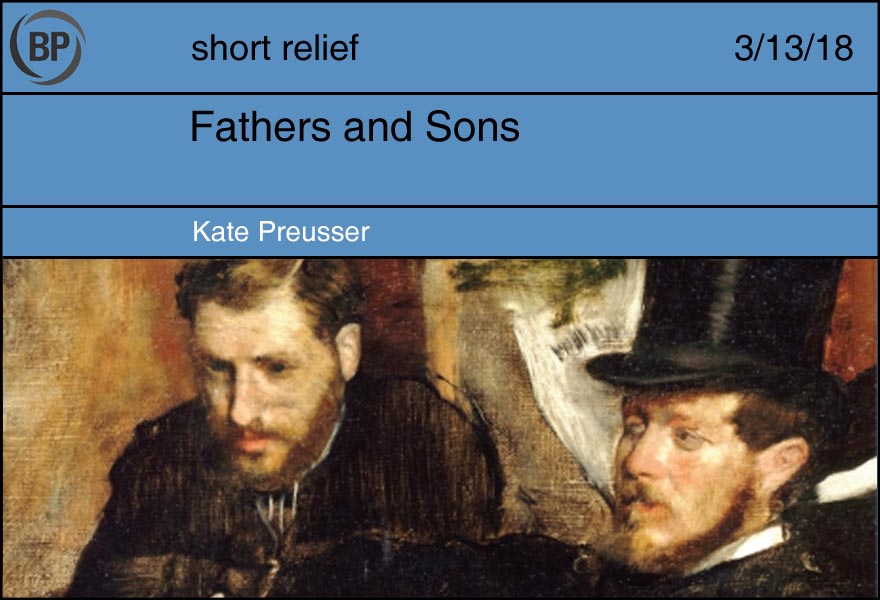 They come from Anaheim and Irvine, from the valley or the desert, from any town with easy access to the I-10. The fathers are named Gary and Scott and Michael; the sons are named Gage and Griffin and Michael Jr. They drive the family SUV, not rental cars, and you can pick them out by the California license plates, the red scrawl text reminiscent of an early-90s Donruss. They favor Giants or Angels games but will watch any game; they are, like the rest of us, just happy to see some baseball.

Over the week I’m in Arizona, I meet an endless permutation of father-and-son combos–somehow the wives and daughters don’t make this trip–sipping beers in the bar, in line for hot dogs, sprawled across an outfield box seat. They are genial, the Tims and Toms and Mitches and Matts and Petes and Patricks; they are curious about me, but pleasantly so. They want to know how I got so interested in baseball. They crane their heads about, looking for the father-brother-boyfriend who never shows up, and when it becomes apparent he will not–will never–show, their delight increases exponentially.

They pepper me with questions: what have I seen from Dee Gordon in the outfield, which teams do I think will take the AL Wild Card, does Ohtani have a shot at Rookie of the Year? I answer these questions well, to their approval, and can feel myself becoming a story they will tell on the drive home, a happy footnote to the weekend, on the same level as a particularly good milkshake found in an exit town off the I-10, a stray dog who knows a handful of tricks. “You sure know your stuff,” the older one chuckles, and the younger one looks embarrassed, even though he’s thinking the same thing.

After the game, I watch father and son load up the SUV–the son taking the heavy lifting, over his father’s protests–in preparation for the drive back through the desert. I think about how I will never understand the dynamics of this relationship, exactly, the easy way fathers and sons make fun of each other, how even the most mild-mannered sets can’t help showing off a little, the intricate interweaving of competition and affection shot through each of these relationships. How as different they might be–politically, culturally, the kind of work they do and the kinds of people with which they surround themselves–these two will always be more similar than they are different. I think about that for a while, as the Arizona sky bruises to a deeper purple, and then I get in my tiny, mint-green rental car and drive off, alone.