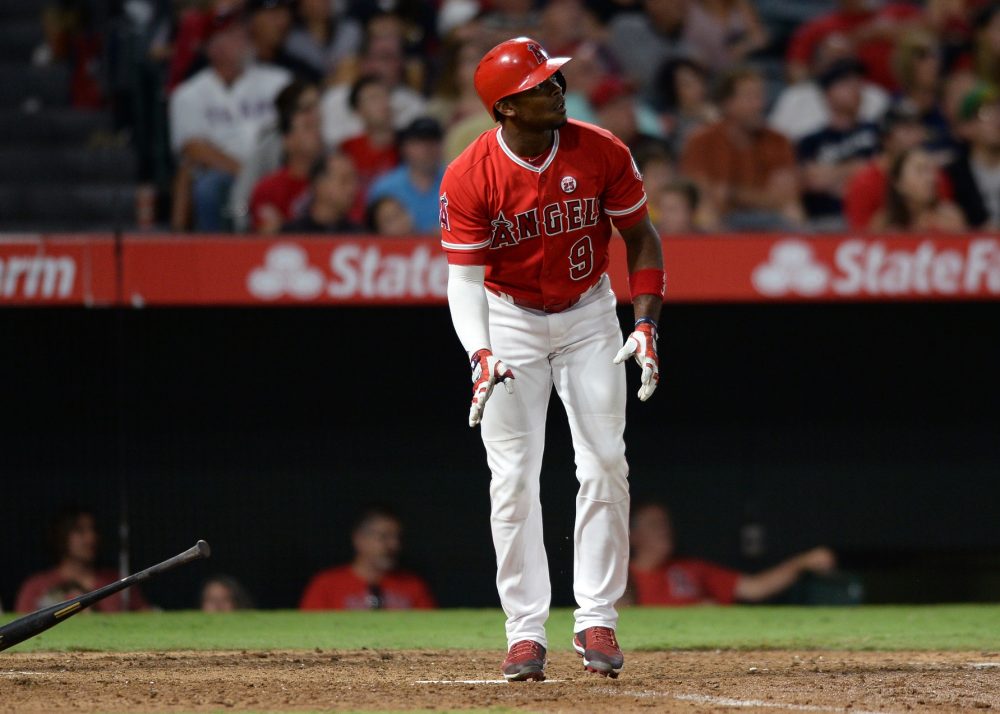 Ball talk….
The concept of batting average being overrated is bananas. Yes, OBP was underrated for years. But that is, thankfully, no longer the case. Since it isn’t, how can the rate at which a player gets hits be overrated? Not rhetorical. I’m actually asking.

Brandon McCarthy, Twitter ace (and sometimes Braves pitcher), came forth with an answer that you, reader of Baseball Prospectus, were probably predisposed to nod along with. Jered Weaver also chimed in with a response that is perfect–in the way that some movies are so terrible they’re great:

Heart,focus,competitiveness,balls,instincts,balls,being clutch,balls everything that cant be measured through a computer doesn’t matter anymore

As Young quickly makes clear, he’s not trying to hearken back to the good ol’ days. He has a nuanced case to state–about how the crusade to improve on batting average’s often-misleading conclusions might have buried some actual understanding–and his success in finding common ground with the stat-savvy respondents feels inspiring, but unfortunately rare. As we–the quants–continue to utilize our (well-earned) sway in the game, we shouldn’t forget how elusive a shared understanding of the game once felt, and how desperately we once wanted to just talk with the almighty players. To tell them something and have them tell us what they thought, to simply be conversant.

Young gets there with a hypothetical: High-leverage situation, at least one runner on base, two outs. Someone is on deck. Maybe a .250 hitter whose patience gets him to a .380 on-base percentage. Or a .330 hitter who likewise runs a .380 OBP. Young would prefer the latter, and he argues pitchers would feel more pressed against him.

Summoning such a hitter from the realm of reality is more of a struggle, but Young isn’t talking about someone batting .330 in that instant. He’s talking about a .330 hitter–a hitter of strong repute. Virtually no one in today’s game fits the overly literal translation except for super-duper stars, who have nothing to do with the underappreciated group he’s trying to take up for. Though the identifying features are likely obscured in his mind’s eye, Young is advocating for a contemporary version of himself–someone he fears has been marginalized or sent away.

So he brought his concern to the world, through words. And some portion of us missed it, because we didn’t understand. For better or worse, this is how the misunderstood or slighted must make their points. They–or sometimes, we–appeal to reason through language while an opposing force with its guard up protects its own interests, however parsimonious. In today’s game, it’s becoming increasingly clear that we stat-folk are no longer misunderstood or slighted. The players are. Which raises some big questions.

How are contemporary players supposed to define themselves? And how do they express their worth as the language of the game’s decision-makers grows increasingly foreign?

Sabermetrically inclined observers of the game, including myself, have come to think of stat-savvy players as pleasant surprises. In an unfamiliar wedding crowd, they’re the person at the dinner table who went to your high school. Just talk to them, because it doesn’t require any work. Further, it’s getting that feeling back, validation. Every comment from the guys who “get it” is a hat tip from the gods–a wink from the stage to the peanut gallery, where we sit with our data sets and projection systems and unpopular opinions.

We attach affection to those who have learned to talk the way we do, capitalize on occasional merchandising opportunities, and keep pushing our way because we are used to fighting for it to be the way. Remember Bud Norris’ icky “our country, our dollars” comments? It’s a more detestable version of the same clique-based instinct. In front offices and on the influential pages of the internet, we may have more of that culture-setting and dollar-allocating power than we’re willing to admit.

Reading Justin Upton’s recent conversation with The Athletic’s Pedro Moura, you’d never come away feeling like the All-Star outfielder speaks the language of the mighty insiders.

Quickly, a few things Upton is not: He’s not close-minded, ill-informed, or aggrieved. He acknowledges how analytics have shaped positive changes for some players, then details the drawbacks he’s noticed. He describes the market interactions that he found poisonous, and how the Tigers and Angels created welcoming landing spots.

His tales of free agency are eye-opening, in a not-good way. He says he was regaled with reasons he wasn’t as good as he thought–remember, by teams that purportedly wanted to sign him. That’s before touching on the vulture-like barrage of one-year offers. You can understand why he came away sour on the whole deal, even if there are reasons to hope that is not the norm.

His view of the circumstances responsible is telling. “Teams don’t value players as people anymore. They value them as a number on a sheet of paper. Basically, they have a stat sheet, and it says, ‘This is that guy.’ He’s a robot, he’s not a person, he’s just a player,” Upton told Moura, struggling to find a word that denotes how cold the front office view of a baseball-playing employee seems.

Deeper in the conversation:

I’m not saying this in a negative way at all, but when sabermetrics came into the game and guys became stats, this was coming. Because there’s no more, “This guy has good makeup. This guy is a good clubhouse guy.” There’s none of the intangibles anymore. It’s strictly what you can do on a piece of paper. And there’s some system or algorithm that is spitting out what this player could possibly do for you. And they’re going, “Oh, we’d like that. Let’s see if we can offer him something.” There’s no more interest in the person. There’s only an interest in his stats.

In his characterization, the stats are kind of a black hole from which judgments are issued–where quantities perhaps outweigh a player’s understood traits just because they can. He feels as though he is not being truly seen, only obliquely measured. Regardless of whether decisions are being made that way, no one should be happy about the disconnect. Worse, we might be making it seem wider than it is. Young, you’ll remember, didn’t say he wanted a “terrifying hitter” or a “gritty hitter” coming up in his hypothetical high-leverage moment. He said he wanted a .330 hitter. Yet he wasn’t turning a player into a stat. He was evoking a guy, an archetype molded by shared understanding.

There are any number of barriers to gaining that understanding, but the biggest one by far is the way some statistical and analytical developments threaten to pull the rug out from under players.

Consider Eric Hosmer. It’s not surprising he balked at numbers that–within, what, months?–publicly confirmed that he hits the ball very hard, then said he didn’t hit it in the correct direction or on the right trajectory, then became widely viewed as evidence against him in a future contract negotiation. Generally, it’s not recommended to explain a new concept to someone by illustrating how much money it should cost them.

It’s not just about money, though–even if the dollar will be an occasional, unavoidable stumbling block. Contract negotiations and arbitration battles and even conversations about how to best deploy someone’s talents are almost always discussions of status. Could that explain why so many sabermetrically fluent players emerged from the depths of replacement-level production? They knew their status all too well and sought to change it. You still run into the odd Joey Votto or Zack Greinke, but most stars are going to bail from conversations in which they are uncomfortably redefined before they ever reach the often-helpful re-imagining stage.

Perhaps we–creators and purveyors of “advanced” stats–need to consider our status. It wasn’t so long ago that we yelled into the void, frustrated. We have information that could help! No one will listen! All because we didn’t or couldn’t say it the right way. Now, our points are not just heard, but acted upon. And we are the ones leaving potentially useful information and improvements in the ether by subtly, maybe even subconsciously, excluding players from the conversation.

No one needs to dramatically alter their understanding of themselves or the game. Nothing needs to be dumbed down to grit or heart or any other inane buzzword. Upton and Young and so many other players display firm grasps of who they are, and who their teammates are, as players. They are not behind or incorrect for expressing it in a different way than a front-office type or Baseball Prospectus writer. They are, in many cases, asking us to participate–to reach a joint understanding of how late life relates to spin rate, or how soft hands relate to framing. If we can listen and engage long enough, we might just find new, better ways to talk about that .330 hitter, or that hitter who could stand to pull the ball more.

You need to be logged in to comment. Login or Subscribe
jssharo
I feel for the players. Who of you, in your work, would wish to be evaluated on your performance mostly by a series of statistics? We feel ourselves to be nuanced creatures with complex stories who go through struggles and experience triumphs. Even if it is a true reckoning, to be reduced to "2.5 WAR" kind of takes the humanity out of what we do at work.
Reply to jssharo
Adrock
Great piece.
Reply to Adrock
Cal White
The word Upton was looking for isn't robot, it's "commodity"... That's how owners see players.
Reply to Cal
Michael McKay
The finance professor has two rebuttal points:
1) There are AMPLE examples of players, recently, in analytically driven organizations, getting roster spots based on makeup / character. David Ross, both with the Red Sox and Cubs (WS winning teams both) would be an obvious recent example, but there are many others. IDK if "makeup" can be quantified, but it obviously is valued and considered in roster construction in the modern era.
2) I'm speaking for me but -- how do I define myself as an MLB player: lifetime earnings baby! the marketplace speaks, and it is (mostly) efficient: you've got 30 different opinions on your talent -- you only need one date to the prom. If you "add value", you get paid. It's pretty simple. Things like All-Star / HOF -- subjective. Get paid / feed your family, down to the 7th generation. EOS
Reply to Michael
Zach Crizer
1. Didn't say it wasn't valued. Said players are struggling to see/understand how it's valued. And are often being ignored or mocked when they suggest it matters.
2. Like anyone else, they want to know WHY they are being paid what they are. When the quantitative pay opinion starts to deviate from the qualitative opinion they gather from their understanding and interactions, they (sometimes) understandably feel a little lost as to what is happening.

The particular issue I'm addressing isn't necessarily with the things that are actually occurring or the money actually being distributed. It's with the conversations that could help all involved make better choices.
Reply to Zach