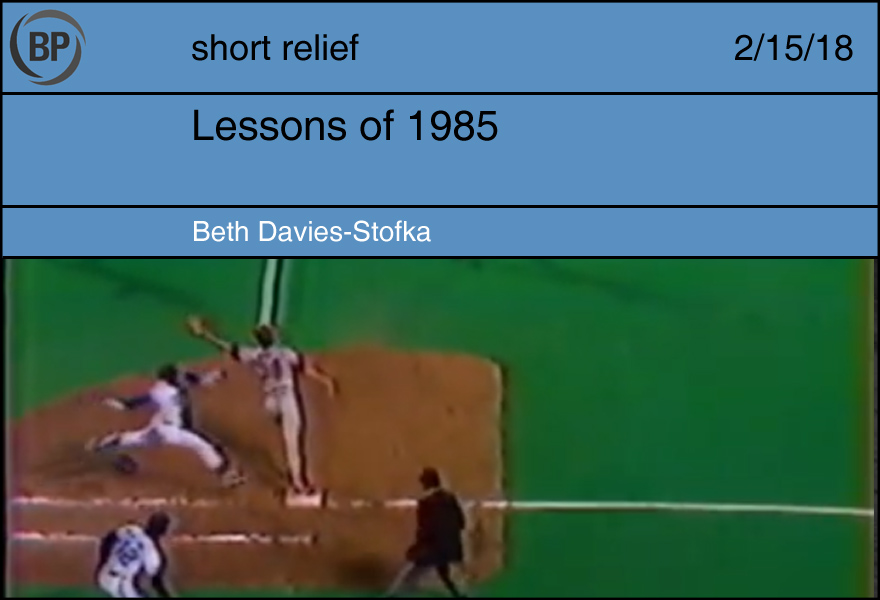 My boyfriend was glued to the television in October of 1985, during the World Series. “I went to high school with Willie Wilson,” he said. “Willie’s good. The Royals are good.” Curious, I sat and watched with him. We watched Wilson run. We watched the Royals win. Afterward, with no more baseball to watch, my boyfriend became glued to me. He picked on me and insulted me and told me I was worthless. Then he made it up to me and said he was sorry and promised he wouldn’t do it again. He told me I was a blemish on his shine and then showered me with gifts. I was so young. I didn’t understand that I was being abused. It took me a long time to sort it out.

The St. Louis Post-Dispatch compared him to Jesse James, connected him to Richard Nixon, and insinuated that he wasn’t qualified to umpire the World Series. It’s true that he blew the call. He didn’t know he’d blown the call. He didn’t know until after the game, and when he found out, watching a tiny version of himself on a television screen, he was sick about it. He watched that leg, frozen in the air as the ball struck Todd Worrell’s mitt; it never came down. Don Denkinger spent nearly 30 successful years as a good umpire, but the blown call in the 1985 World Series was his defining moment. It unleashed years of abuse. Ultimately he made peace with it. It is what it is.

Everyone makes mistakes, he said.
We all have problems, you said.
I’m not alone, I said. 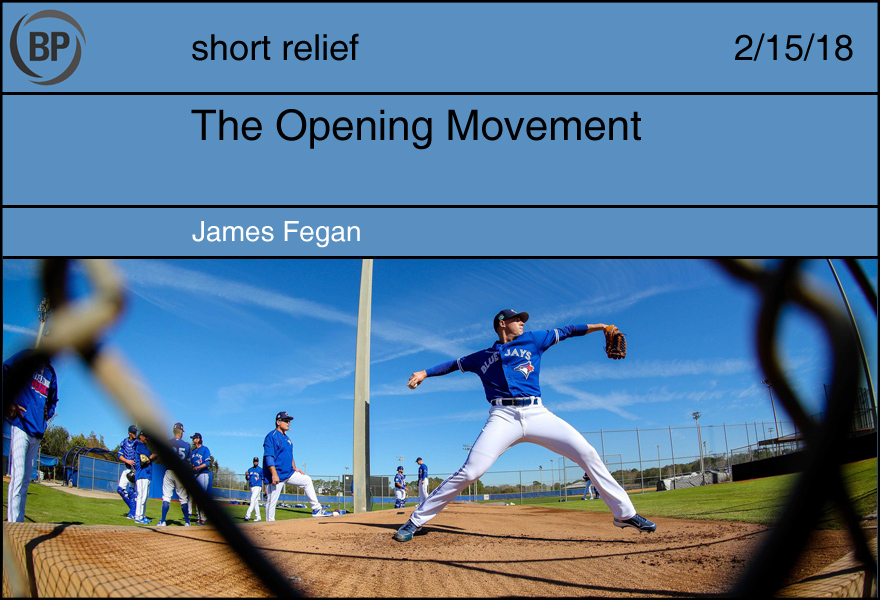 It rained in Arizona Wednesday, pelting the annual communal raison d’etre of pitchers and catchers reporting with drips of moisture chilled by harsh desert winds.

Pitchers and catchers reporting is just a formality to get their physicals out of the way, and deal with the wave of carnage that their limbs, shredded from their thoroughly unnatural and unsustainable line of work, carry with them at every step.

Part of getting examined for pitchers is laying down on a slab and getting every part of themselves measured like a carcass, allowing you to see all their surgical scars.

Pitchers and catchers reported Wednesday, but most of the players are already there. The constant calls for every struggling or developing hitter could be improved by working harder, working longer, practicing more, has produced a culture of constant performative effort to stave off accusations of sloth. If players aren’t showing up early, they’re living at the complex. Eventually all dates lose meaning if you work every single day of the week until you’re dead.

Pitchers and catchers reported but there won’t even be so much as a Cactus League game for another eight days. Approximately 12 minutes into that opening, the utter drudgery of spring training competition will choke you like the smoke inside a burning building. Five weeks of nothing games that would all be all be tied for first the dullest game of the regular season lie ahead. They’re what you have to look forward to.

Pitchers and catchers reported, and you watched a full bullpen session–perhaps multiple ones–by choice. A grainy cell phone video of a pitcher, shaking the scar tissue out his elbow and throwing a ball in the rain, to no hitter, with no velocity reading, and no real purpose other than to just throw again and start remember how it feels, and you watched it because it filled something that was missing in your life. Which is bizarre, inexplicable and beyond reason, but pitchers and catchers reported, so at least it’s back. 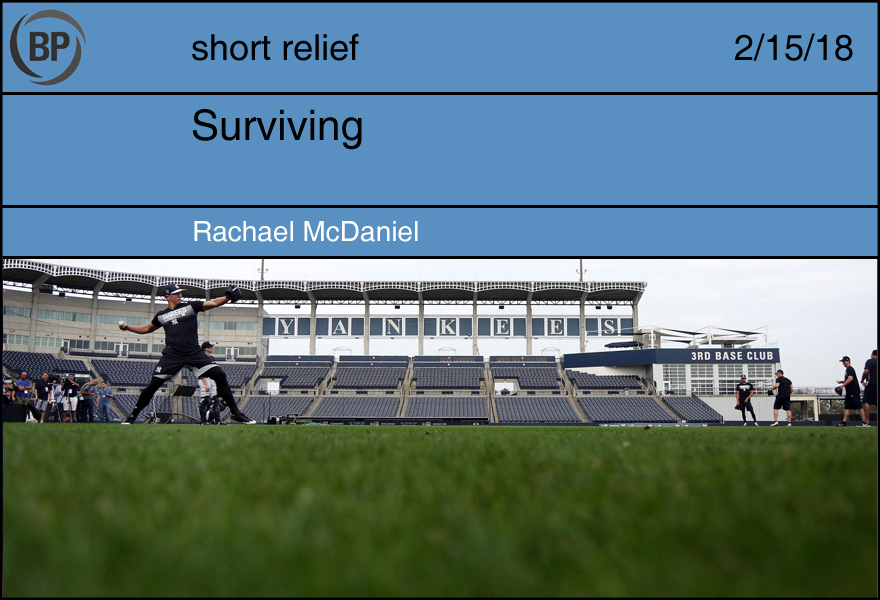 Here’s what I was doing when pitchers and catchers reported in 2015: I was sitting alone in a hospital room, probably in bed, probably crying. I was one of the patients who got in trouble with the nurses not for being overly demanding, but for being too much the opposite. They would come in and cajole me to go out to the common area, go play the piano or solitaire or pace in circles or sit and watch whatever reality TV program the more elderly patients had on; I pretended to be asleep. They woke me up, informed me that I shouldn’t be sleeping that much, and asked me if I wanted anything, like, a juice, or a banana, or maybe to play a board game with them; I always said no. And it was true. I didn’t want to do anything. I didn’t care about anything, and certainly not about baseball. All I wanted to do was sit and lament the fact that I wasn’t dead.

Many people find themselves to be at their most depressed in the middle of winter, around December, when the days are at their shortest, and it’s cold, and darkness reigns. Not so for me. For me, it’s a sharp downhill from New Year’s. By the time February begins, I’m usually ready to sink into nothingness. Which is why, since I came back to baseball in mid-2015, the fact that spring training begins again in the middle of this terrible, terrible month has been so important. It is a day fixed in the middle of the emptiness that I can use as a landmark. Hey, I made it this far. Hey, there’s something to look forward to. Only this many days left. If I can just make it this many days, then I know something good will happen. I know I’ll be able to feel something again.

It’s probably pretty obvious to anyone who’s been reading my Short Relief pieces throughout the winter that I’ve been feeling bad. I’ve written about pits and teen angst and being consumed by fog and about being trapped in a box. I never sit down with the intention of writing anything sad—if anything, I always want to do something different, to show that I have a topical range beyond “depression.” But it just keeps on coming out that way.

The truth is that I haven’t felt this bad since that February of 2015, when I was sitting in my hospital bed wishing I had succeeded in my concerted efforts to die. I’ve been spending a lot of time lately in bed, or asleep, or pretending to be asleep. At night I stay up as long as I possibly can, as if in doing so I can stave off another day of this. It’s a cycle that feeds itself. It’s hard to see an endpoint.

Throughout it all, I’ve been counting down to this day that has been such an important point to me for the past two years: the day when pitchers and catchers report. I have bought in wholeheartedly to that metaphorical return of spring. It has worked, to some extent, before. I was looking forward to waking up on Tuesday and Wednesday and seeing all the new pictures and interviews that have, in the past, heralded the arrival of something different and good.

On Tuesday, I woke up for about fifteen minutes before I passed out again. Same thing today. All the happy news passed me by. Nothing felt any different. When I did wake up, all the tweets of the bright spring training pictures, the smiling faces that would usually have made me feel hopeful, were sandwiched between things that made me feel worse. Labor unrest, domestic violence, sexual assault, mass shootings. I went back to sleep. I went to the psychiatrist and cried.

This might very well be a cautionary tale against investing so much in a multi-billion dollar business that is ultimately indifferent to you, but that’s neither the message I want to leave you on, nor the message I wish to give myself. After all, it’s just pitchers and catchers reporting. There will be real baseball games that I can sit and watch next week. It won’t just be pictures and tweets with quotes in them. I’m sure that will be good. I need that.

Here is what I do want to leave you with: In the absence of baseball itself during this winter that has treated me so badly, it has been this community, the act of sitting down and writing my dumb sad shit for this column every week, that has kept me going. I don’t know if I would have been able to process the heaviness of my own situation without the weekly compulsion to write something, anything, no matter how strange, even mildly connected to baseball. That’s what separates me in 2018 from me in 2015. I have something worth waking up for.

Even if the world of major league baseball itself has been more depressing than anything else lately, I’m thankful for the people who let me write this, and the people who read it, and for the sport that brought us all together. That’s what really matters. Not the teams or the owners or the players.

So thanks for surviving with me for the past few months. I hope the 2018 season is better for all of us.

You need to be logged in to comment. Login or Subscribe
Kristoffer Ericson
Rachael, I really, *really* enjoy your writing. Just wanted to say it for once, instead of just thinking it every time. :o)
Reply to Kristoffer
Noah Stafford
When I was at my worst, I started making music with a friend. Just knowing that you're working towards something, building and making a creating and improving, that was huge for me. I hope you can find the same solace in your work that I did.
Reply to Noah
Michael Beaton
Rachael, thank you for your work. In a world of critical analysis, op-eds, and breaking news, your writing is novel and refreshingly artistic.
Reply to Michael
David Yeager
This is good work and you're good people.
Reply to David