Thanksgiving week took me to Fort Lauderdale, Florida. A relative was getting married there, an excellent reason to escape the chill creeping up the spine of the northeast. I’ve been in Florida before—marching band trips and Walt Disney World and one lovely coincidental conference that allowed me to see a baseball game in Tampa on Opening Day—but I’ve never been in Florida when everything else is signaling winter. Even on Thanksgiving day, a giant inflatable snowman stood beside one of the gateways to the beach, be-hatted and scarved and definitively tanned. By the time we got back from the family dinner, the hotel had set up Christmas trees in the lobby—fake and white and sparkling and trimmed in glittering red. Drifts of cotton snow blanketed their bases. The sun set, too, as early as it did back home, where temperatures rested in the twenties.

The sensory input scrambled me, and every moment I looked for the other markers of summer, reason taking a back seat to the lizard brain of habit and expectation: it was sunny and warm; where, then, the baseball? No one on the beach had brought mitts; kids instead threw little foam footballs that floated in the surf. Where radios might have offered up some day-baseball play-by-play, I heard instead one sun-worshipper’s insistent jazz, broken by bass-thump and cumbia riffs as drivers passed.

Each day, I looked for baseball in the not-summer. The closest I got was when our Lyft driver rocketed past a sports complex near the highway. We were on our way to the wedding, but people stood on the one baseball field we glimpsed. I might have missed them amid the profusion of fences and landscaping and signage, but the infield dirt and some Miami-orange jerseys drew the eye against the green and yellow. 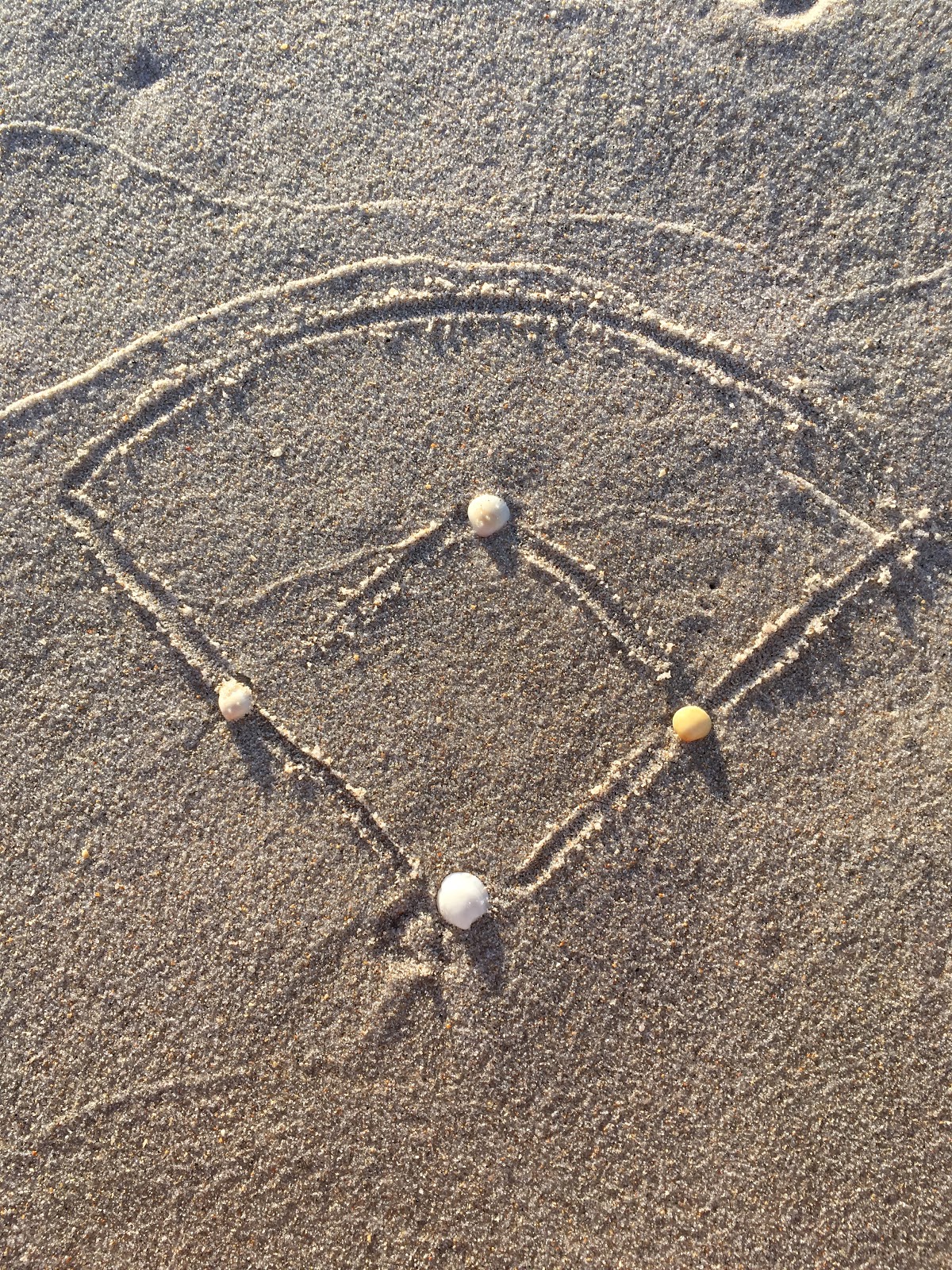 Maybe it was the unsatisfactory view of that field; maybe it was my stymied hope to find some of the summer game in this feeling of arrested June, that led me to the smooth plane at water’s edge. The tide drew higher as I set my shells, twice the waves’ edge lifting and sliding them before I could snap the picture. The little bivalve bases had no buckle, no post. But eventually it worked, the shape recognizable enough, the image fixed just long enough, to last a few months more.

In Five Seasons, Roger Angell defends the idea of fandom, despite the obvious silliness of devoting so much time and attention to something as insignificant as baseball. While the disdain of the non-fan is justifiable, it misses something important.

“What is left out of this calculation, it seems to me, is the business of caring – caring deeply and passionately, really caring – which is a capacity or an emotion that has almost gone out of our lives. And so it seems possible that we have come to a time when it no longer matters so much what the caring is about, how frail or foolish is the object of that concern, as long as the feeling itself can be saved.”

Angell is right, as he so often is. It is one of our great challenges as adults to make way for liking things, for caring. Grown-up life, out in the world with your bills, lends itself to not liking things, because liking things takes time, and who has that to spare? Liking things seems childish; we know too much to think anything is actually good. But not liking things is miserable. It is somehow more exhausting. We have to forgive ourselves liking things, and declare the things we like worthy of our time, and in so doing forgive the impulse to be happy even if it is childish and difficult. Liking our teams allows us to like things, and to find other people who like those same things. It’s the only reason people who move to big cities in their twenties get to talk about something other than the stock market and the weather when out at bars. It’s what we get as a reward for voting and going to work and eating our greens.

Except it can be a bit odd. We should like things, but maybe not this much. We buy hats embroidered with LAs, and NYs, and that’s fine; we’re from there. We buy jerseys with strangers’ names on them, and that’s mostly fine, too; in our eagerness to like things, it is unsurprising we would point out which of those things we like best. It blurs a line between us and them, but that’s the point. We all just want to be like our guys. But then we buy game-used balls. I mean, we just want to remember being there. Then we buy game worn gear. That guy didn’t play that night. It’s not sweaty. But the next one is. It’s dirt stained. You can see where the seams were taxed by thighs and slides into second. That’s the point. You have your guy’s pants now. And that’s how you find yourself bidding on this: 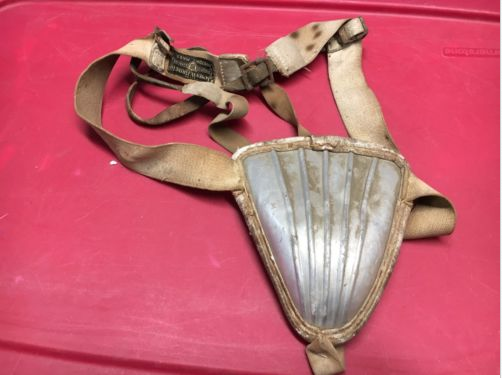 It is, if the eBay listing is to be believed, an EXTREMELY SCARCE, ORIGINAL 1900’s BASEBALL CUP MADE BY JAMES W. BRINE CO. It sold for $66. It has “GREAT EYE APPEAL!!!” though the subject of said appeal requires some imagination. It is a piece of baseball history. But imagine buying it. Imagine it coming in mail. You like baseball, love it, even. But this much? You might reconsider your choices. You might think about what liking this particular thing this much has led you to do. You might go outside instead.

Fandom is predicated on leaning in, on liking things, on perhaps identifying a bit too strongly with strangers. The wonder, the thrill, depend on embracing this oddity. But it might also depend on not holding that oddity too close for too long. We want to be silly but not ridiculous. We can’t forget to vote or go to work or eat our greens. We have to remember to like other things, too. Imagine liking something enough to buy an original 1900s baseball cup. How could you live with the game after that?

Like 97 percent of the baseball internet readership, it took me a mere ten minutes of reading a Baseball Prospectus prospect list to launch into a frothing rage that has lasted now well over a week. In their review of the White Sox farm system, the BP prospect team speculated that Jake Burger might become the new “large adult son” of the game.

It’s an interesting, if obviously superficial proposition, but I have a counter: as long as we continue to deny the true large adult son of baseball, we will wander in the darkness forever.

Baseball’s large adult son is Tommy Kahnle. It has always been Tommy Kahnle, and it’s all the more perplexing that Kahnle was traded to the literal most popular franchise in the sport, and starred in the playoffs and we are still at this point of not realizing or crowning him. When Sports Illustrated’s Jon Tayler wrote the definitive guide to the large adult son idea, and declared it to be Kyle Schwarber, he very noticeably wound up describing Tommy Kahnle.

“A true Large Adult Son isn’t just a young man of oversized proportions. He’s also a galoot; a big boy; a bit of a lummox who nonetheless provides joy to all who know him. He’s a Hawaiian shirt in human form; he’s the kind of guy everyone refers to as “Spud” or “Bubba.” He is, in short, a big fat party animal. The quintessential Large Adult Son has food stains on him at all times and the kind of haircut that suggests that he goes to the barbershop with no plans. He prefers overalls to pants and no shoes to anything else. He hoots and hollers with abandon, and when it’s time to get rowdy, none can match him, for he knows every pro wrestling move and has practiced all of them on his cousins in his parents’ unfinished basement.”

The night he was traded to the Yankees, Tommy Kahnle, wearing a bright pastel Ultimate Warrior T-shirt, packed something approaching 50 football jerseys from his locker. He worked out most days with the White Sox in a Stone Cold Steve Austin sleeveless tee, and comes into games to the Shinsuke Nakamura entrance theme in a skin-tight uniform that looks like it was passed down from an older brother, or purchased before a growth spurt. While he’s never mentioned among the bat-flippers and preeners of the sport, Kahnle can hoot and holler with the best. Nearly every postgame interview I recorded in the White Sox clubhouse until mid-July had the sound of Kahnle hollering in the background—often from the shower—in it, and pregame ones would have him laughing while playing Rampage or watching soccer. His teammates had to publicly defend him as misunderstood and merely very loud when his character was impugned seemingly out of nowhere by LaTroy Hawkins. His manager, Rick Renteria, called him “Tommy Boy.” So did the beat writers.

Perhaps he is too actually in shape to qualify—But should the large adult son not be effortlessly, unknowingly strong? Weight problems and obesity are serious matters, and the life of the large adult son is too carefree to be pulled down by these blights.

Perhaps he is too self-aware. Kahnle once laughed after commenting to me that he doesn’t really understand what gives his changeup the movement it gets, as if he found the fact that is career is staked on this pitch that is unpredictable rather than he was actual clueless about how it worked. He seems to know and enjoy his role in the clubhouse rather than being truly unable to control his outbursts. He’s actually married and in his late-20s, which doesn’t seem very in line the idea of a teenager who never stopped teenaging.

Perhaps these reasons will be comfort to the infidels, who choose to deny a huge dude who throws 100 mph and bounces around the ballpark at the same speed when he’s not throwing. But the true courage in this world resides not with those who scrutinize every detail, who reject all in front of them to be in brooding pursuit for their entire lives, but who can face the embodiment of everything they have ever wanted in their lives standing in front of them, and accept them for the miracle they represent.

You need to be logged in to comment. Login or Subscribe
John Longballa
Articles like these are why Short Relief (with morning coffee) is responsible for my continued renewals.
Reply to John
Adrock
Adding to the comment above, the writing in Short Relief is consistently excellent. Deeming it 'quirky' would be selling it short, as would 'elliptical' and 'amusing'. But it's enjoyable every day.

Thank you!
Reply to Adrock