The Treaty of Parrish 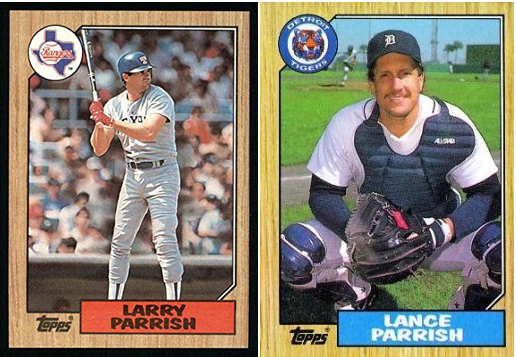 They should also not be confused as brothers. They aren’t even related and as they began in different leagues, didn’t meet for quite some time.

The main difference is that Lance once acted as Tina Turner’s bodyguard during a taping of Hollywood Squares while Turner was going through her divorce, according to Lance’s autobiography. But Lance should not then be confused with Kevin Costner, who once portrayed another old Detroit Tigers player.

So if you need some more differences, here they are:

-Lance was a catcher
-Larry was a third baseman

-Lance was “Ln Parrish” in box scores
-Larry was “La Parrish”, or what a Russian calls the capital of France

Please consider printing this article out and storing in your glove compartment or wallet for later consultation.

Some Antidotes to Consider

Too much generic in the world. Avoid cookie-cutter. Let you shine through always. It’s better! #individuality

Baseball has been sad for the past few days. I don’t think any of us need more sadness. I certainly don’t. So instead I will provide a list of some of the things that make me happy about baseball. And not happy in, like, an existential kind of way, or in some way that is happy but also tragic at the same time. Just pure, dumb, giddy happiness.