I have a little notebook. I keep it in my purse, with all the other crap I compulsively carry. Keys, chapstick, a Target receipt I don’t need. It’s for ideas. Joan Didion wrote an essay once on keeping notebooks. She thought of it as an unusual compulsion, foreign to those who didn’t have the impulse. It is the province of “anxious malcontents, children afflicted apparently at birth with some presentiment of loss.” That makes me sound like I think a lot of myself, or my potential for deeply felt sadness; I’m mostly prone to forgetfulness. Ideas are such little jerks; they never want to hang out for long. You have to write them down, capture them, make them take on car payments.

If you would forgive a long quote, Didion described it by saying:

“I sometimes delude myself about why I keep a notebook, imagine that some thrifty virtue derives from preserving everything observed. See enough and write it down, I tell myself, and then some morning when the world seems drained of wonder, some day when I am only going through the motions of doing what I am supposed to do, which is write– on that bankrupt morning I will simply open my notebook and there it will all be, a forgotten account with accumulated interest, paid passage back to the world out there.”

I’ve done that. I’ve flipped to a random page on a day I’m stuck, hoping to get unstuck. Sometimes it works. Sometimes I’m confronted by phrases like “surprising baseball brothers!” and “all the bad blues.” Not sure about those. I have one I keep going back to though.

Yesterday wasn’t a good day. I needed to write but couldn’t get started. I felt that compression of spacetime left for things that aren’t awful that I feel so often now. I got in an unproductive argument with a stranger. Time to break glass; time to look at the notebook. Ah, there it is. “Watch the faces.” I can work with that. Faces are amazing. They’re each their own story. Baseball faces tell baseball stories, but human stories, too. Except there were no new faces looking at new things. There was only this.

There was supposed to be baseball, but there wasn’t. Sometimes on bad days, you get good advice and still have to muddle through without what you need the most, no matter what your notebook says.

Didion gave us the real reason for her notebooks. She talked about how if they are kept long enough, they become a way to keep touch with ourselves as we once were: younger, dumber versions with shorter hangovers but no money at all. Versions we don’t feel anymore. Maybe I’ll write down the day before yesterday’s date in my little notebook. I’ll take it for what I want it to be; a version of myself with new faces, on a day that was good.

To Jeff*, Sitting in Section 8, Row 11 at Fenway Park as the Astros Lost Game 3 to the Red Sox Last Sunday 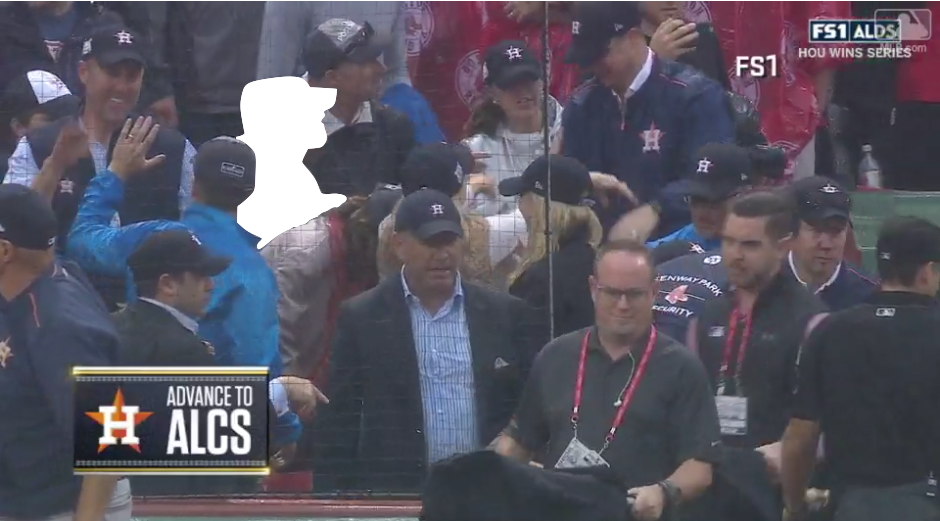 You were already teetering on the last wooden rung of your seat when I arrived, drink in hand, to what was supposed to be nothing more than a fun afternoon in Boston. And yet there you sat, your nondescript black flushed Astros hat umbrellaing a face staring down the barrel of an historian’s pen. I sipped. You shook.

Your guys got off to an early start that Sunday afternoon, as the noontime humidity hugged our brows. But John Farrell’s decision to start Doug Fister in an elimination game clearly gave me more joy than it did you, standing as you were on the precipice of joy, remembering precisely what makes it possible in the first place. I heard the tapping of your right foot, as it shook, there, and you, biting hangnails on your right hand not out of habit but because you had to, goddammit, because you knew what was at stake. Carlos Correa homered. I laughed. You clapped, once. You bit your lip.

I’m not sure exactly when it was that my attention turned to you from what was happening on the field. Part of it may have been the fact I had no rooting interest, the other that you looked so unlike the typical Guy Sitting Next To Me At Fenway, and I absolutely, 100%, do not mean that in the pejorative sense. There were bad pitches, and yet you did not yell. There were runs and you did not scream. Instead you nervously scratched the back of your neck and your eyes followed George Springer, and it was like you were saying it’sokayyougotthenextoneit’sfineit’sfinetwentytwomoreoutstogoit’sfine. I wonder what that must have felt like.

Soon, David Price was striking out the side, and the Red Sox were walloping baseballs up the middle, rounding third to touch home and even somehow making Josh Reddick miss catches which nevertheless met his mitt before falling. Carson Smith threw some strikes to Jose Altuve and I looked over and you were gone, nowhere to be seen. My team’s playoff drought can purchase a driver’s license.

The next day the Astros would sneak a few runs off the arms of two of the game’s most feared pitchers, and thankfully, then, in the rain, as if it were out of a Hollywood film, earn an appearance in the ALCS. But Jeff, you were there on Sunday, section 8, row 11, and you thought you would see it in person. I don’t know where you were the next day–perhaps you had another ticket, perhaps you had better seats–but in a way it’s like you never even saw it at all.

No, because to me you will always be there, frozen between the possibility of what could be and what was, biting your nails because the glow of the sun was enough to burn your wings mid-flight. I’m sure that whoever you are, the Real You, will watch whatever happens to this Astros team and enjoy it, and you will revel in the deep run this team has been building towards for a decade now. But somewhere else, stuck in between, is something else. As Bergson once said,

All seems to take place as if, in this aggregate of images which I call the universe, nothing really new could happen except through the medium of certain particular images, the type of which is furnished me by my body.

So to Jeff, you there, still sitting in section 8, row 11 at Fenway Park as the Astros lost game three to the Red Sox last Sunday, and still sitting there, today, frozen in your time, I can only imagine what it would feel to see your team win a series in person.

But that did not happen, Jeff, wherever you are. Wherever, and whenever you may be.