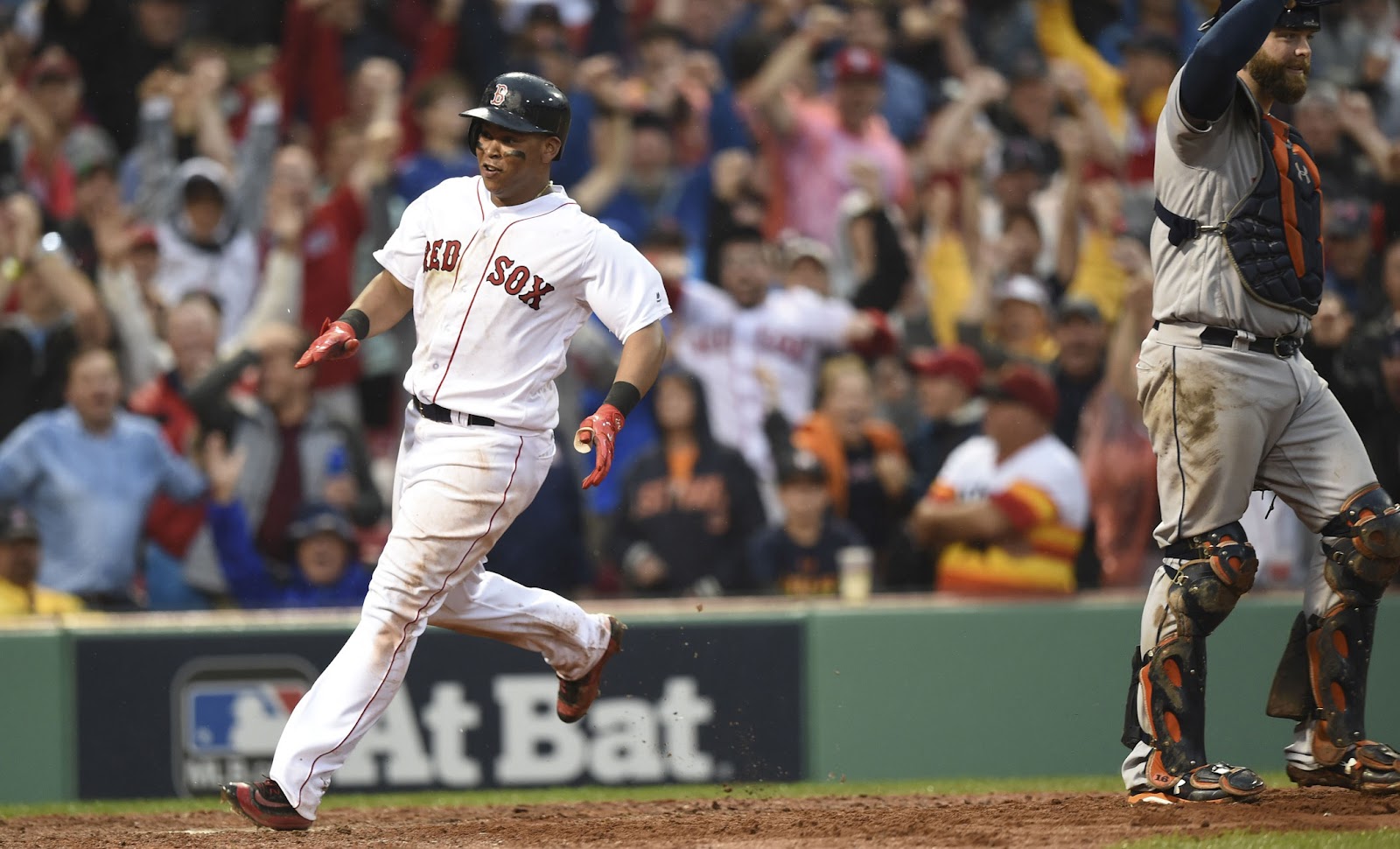 There are a lot of bad things happening in the world right now, and it’s easy to tumble into an abyss thinking about how each of us—individually and perhaps collectively—falls far short of the necessary capabilities to stop them. It’s becoming increasingly difficult to strike the fine balance between remaining an informed, engaged citizen and avoiding the powerless feeling that plunges one into a deeply depressive state from which it seems there is no escape. But for many of us, walking this tightrope is aided by baseball.

It’s no secret that we take baseball seriously, and that for all of us attached to a particular team, each game is a random series of moments of refuge and despair that over time craft our emotions and personalities. If my team pukes all over themselves on the field, I infect everyone around me with my irritability, and if my team pulls off a miraculous victory, I embody that same resoluteness. Watching baseball, like reading the news, becomes a balancing exercise drawn out over seven months. Many—though hardly all of us, I can safely say—eventually master the art as the tightrope walker masters theirs, and with it comes overwhelming relief found in the Aristotelian virtue of moderation, or so I’m told.

I’m not yet in the same realm as these people, and so when the Red Sox were eliminated in one of the most frustrating ways imaginable for a team nowhere near as talented as its opponent, I immediately assumed the sullen face of a toddler denied a third cookie. I began thinking about all the tiny decisions everyone involved could have made to prolong the series and assigned blame accordingly, as though being eliminated was not enough retributive justice.

But in the hours since, I’ve calmed down just enough to begin appreciating the series for what it was: the best possible display of baseball’s awesome stupidity, encapsulated in Rafael Devers. For largely indiscernible reasons, Devers was not on the field as much as he should have been, but when he did play, he left us speechless, and we all witnessed his introduction to the baseball world in the most bizarre, wondrous way.

Before Sunday’s game, none of us knew just how delightfully, captivatingly awkward he is. And then he did something that deserves a post of its own:

lol his excited and confused bat flip is wonderful pic.twitter.com/M1gO0MJ3KF

We were intrigued, invested, and eager to see more. He did not disappoint:

In a series that often felt hopeless at a time when most things seem hopeless, Rafael Devers reminded us all that it’s okay to find joy in largely immaterial things. It’s okay to laugh at bat flips, marvel at home runs, and lose yourself in the minutiae of postseason baseball. In fact, it might even be encouraged.

The Uncomfortable Intimacy of the Half-Wall

The Green Monster and the Pesky Pole get the lion’s share of attention when discussing Fenway Park’s idiosyncrasies, but for my money, the weirdest architectural feature in the park is 302 feet away from home plate, where a mere three feet separates the professional baseball player from the unwashed masses of the baked bean hoi polloi. Three feet! That is not a lot. It is the height of a fire hydrant, or a KRAGSTA side table from IKEA, or an average three-year-old. Boston essentially has a wall of toddlers dividing fans from players. That seems both too close and too small, a suffocating kind of intimacy.

On Sunday, Mookie Betts robbed Josh Reddick of a three-run homer. It was a beautiful thing. As Mookie runs toward this tiny, ridiculous wall, the crowd visibly pulls backward, the Red Sea receding. 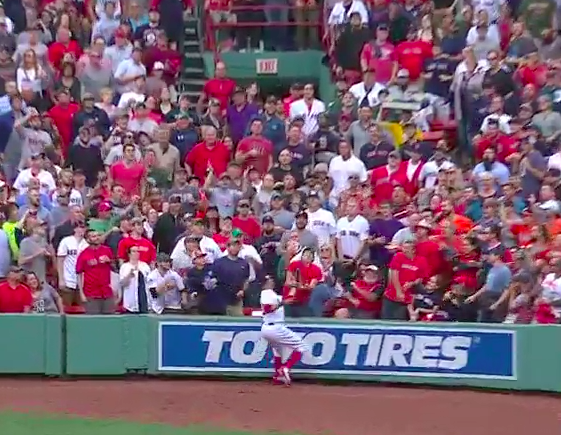 Look at that fantastic orchestra pit, that choir of red-clad angels drawing back to allow the solo singer to step to the front of the chancel. Many of these fans would like to catch the ball, but more importantly, they would like to give Mookie his space. In a city where someone will trample you down the stairs to the T at South Station without a second thought, these fans will avoid getting their beer and sweat and nacho cheese sauce and human smells on their right fielder; they will treat him like grandma’s good couch, and wave a supportive banner as he trots back to the dugout. There is an intimacy here created by physical proximity, sure, but that’s not all there is to it; it is the intimacy Virginia Woolf describes in The Waves, of walking down the street with a group of fellow-travelers, of those who love what you love in a big and bright way that makes you yourself feel bigger and brighter: “But we – against the brick, against the branches, we six, out of how many million millions, for one moment out of what measureless abundance of past time and time to come, burnt there triumphant. The moment was all; the moment was enough.”

Josh Reddick would have a very different experience with that wall, over where it expands all the way up to five feet (a shortish llama, a novelty giant teddy bear won at a carnival, one Danny Devito). He would have a home run glance off his glove and find its way into the stands, and his reception would not be so warm: 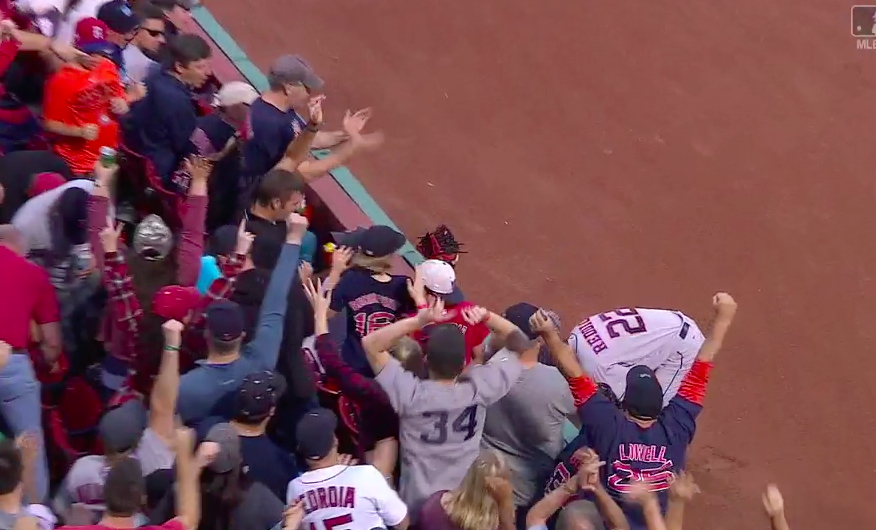 Even two Danny Devitos standing on each others’ shoulders couldn’t shield Reddick from the sarcastic jeers of that crowd. This the shadow side of intimacy, the physical proximity without the love: it is quiet barbs over whose turn it is to make the coffee, polite posturing at a work event, a broken dish, a thrown shoe. It’s the kind of intimacy of a Raymond Carver short story, a diseased and broken thing. It’s also the kind of intimacy that is incredibly forgettable: Reddick walks out of Fenway tonight a winner, headed back to play in his home park in Houston. This play will not haunt him, and neither will these people. 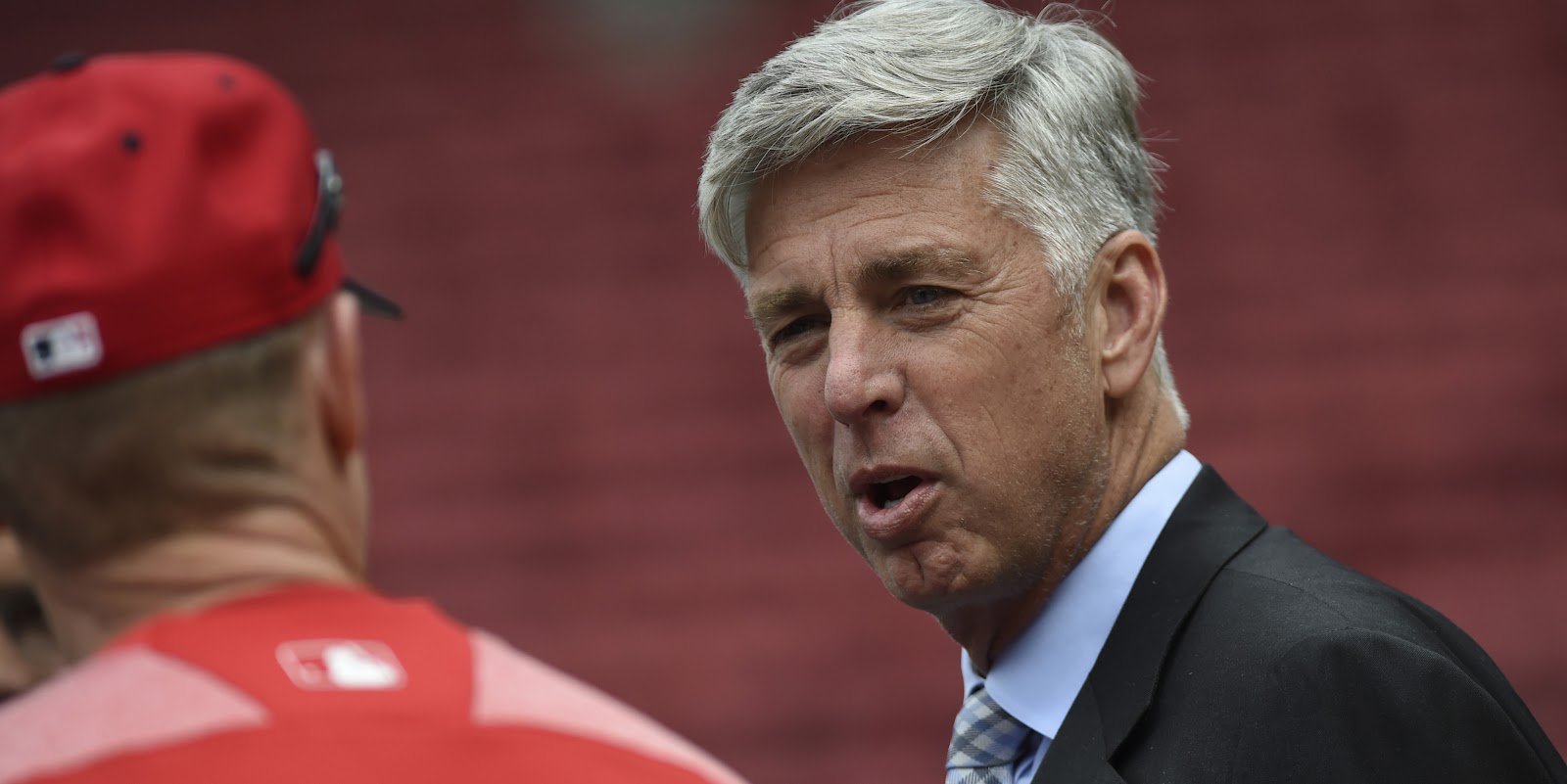 I’ve never been a Detroit Tigers or Boston Red Sox fan, so my experience with Dave Dombrowski has mostly been of the faroff variety. Here are the highlights: he’s a good executive who makes good trades and has a really hard time building a bullpen. That last one is probably the main thing people know him for in Detroit: despite all of the best intentions, Dombrowski could never build the bullpen he needed to take his Miguel Cabrera-Justin Verlander led powerhouse to World Series glory.

And today, I feel like I get his plight a little bit more. Today, I tried to fix a toilet.

Now before you ask: no, it’s not the gross kind of fix. This was a pretty sanitary problem, just a leak in the tank I discovered by chance going for my second cup of coffee. The problem, I diagnosed as I took off the top of the toilet tank, was that there was a faulty fill valve. It seemed like an easy enough fix, so I turned off the water, hopped in the car, and headed to Home Depot.

And seven hours later, two more trips later, and seven or so towels on the floor later, I was left looking at a toilet that had been remade from the guts up and was still…leaking. Not just leaking, but leaking in new and exciting ways every time I turned on the water: in great jets from the fitting; in drops small enough to make me hope the problem was fixed for a brief second; in streams coming from areas I didn’t know could leak. I closed the bathroom door resolved: I didn’t do a good job.

And this must be what Dombrowski felt like during those years in Detroit. Every Joe Nathan he signed who went down with Tommy John surgery, and every Bruce Rondon-like 100 MPH pitcher who couldn’t find the plate — these were all his fill valves and new rubber washers. That water line I bought that worked pretty well but didn’t actually solve my ultimate problem? That’s Alex Wilson. The porcelain that’s probably cracking as we speak? That’s right: Jose Valverde.

I suppose the moral of the story is that prince and pauper, great man and small, we all face our own Dombrowski Bullpen. What distinguishes us is how we recover from it and…well, look I just saw the box score from game four of the Red Sox-Astros ALDS and, ah, we’ll just wait on a moral for a less touchy day.