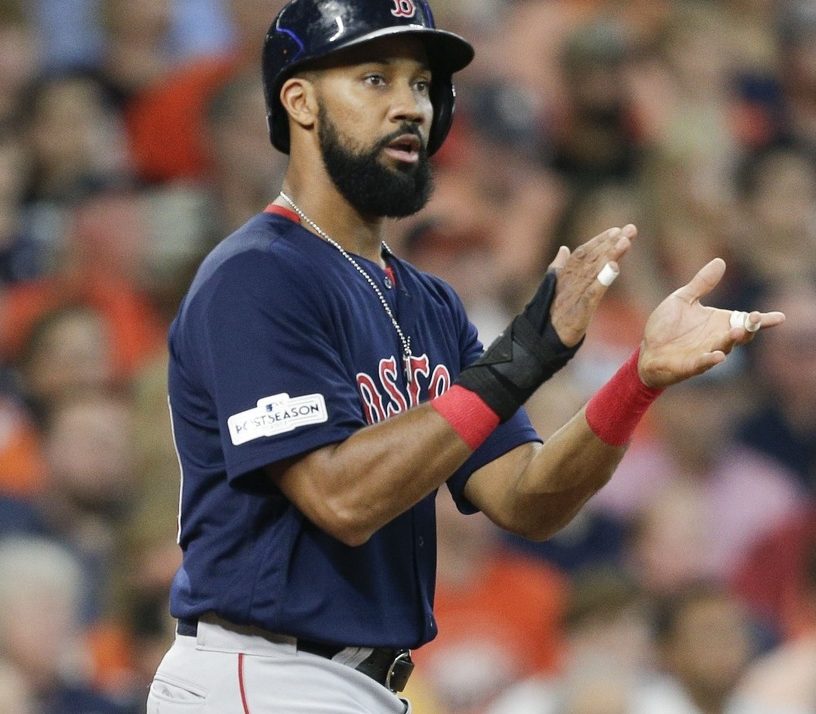 On August 25, a bit of baseball history happened; only, hardly anyone noticed. The Red Sox were losing a blowout against the Orioles. To save an arm, first baseman Mitch Moreland pitched the top of the ninth inning. Hanley Ramirez took Moreland’s place at first base, replacing designated hitter Chris Young in the lineup. No more Chris Young, no more designated hitter. Normal blowout stuff so far. But in the bottom of the ninth, Young came to the plate and singled.

On Baseball-Reference it was noted like this, but that’s only because you have to put something to balance the books.

According to RetroSheet, it is the only instance of illegal lineup re-entry in MLB history. And hardly anyone there noticed! Italics. Exclamation point! Neither broadcast booth said anything; Buck Showalter didn’t fuss; the umpires let Young take his swings. Perhaps even more surprising, given our delight in both weird baseball and historical novelty, the incident went largely unremarked upon in the broader baseball world[1]. How are we to account for such a wholesale neglect of baseball history?

When considering such a question, we should acknowledge an obvious point: this was a bad game. The Red Sox lost 16-3. They committed five errors. These guys were tired and pretty grumpy. Here is Brock Holt, after he strikes out looking to end the game.

Yup, he’s ready for bed. This game was the sort of slog that makes you snap at your partner only to regret it 10 minutes later. None of us are particularly impressive when we’re worn out. In fact, I’d estimate 89 percent of what led to Young’s illegal re-entry is exactly the same stuff that causes you to leave your keys in the front door after a bad day at work. This game lasted three hours and 37 minutes. These guys were tired and pretty grumpy. That’s 89 percent of it. But it’s only 89 percent of it. The mystery is in the other 11 percent.

John Farrell Got a Little Distracted (1%)

Sometimes in the morning, I’ll pour a cup of coffee only to remember that I need to unload the dishwasher. I’ll unload the dishwasher. Then it’s time to get dressed. Drat, my coffee! I’ll microwave my coffee for 20 seconds. Then I’ll make my lunch. Then I’ll remember the coffee in the microwave. I’ll microwave it again (it’s cold now). I’ll drive to work. I’ll feel tired. I’ll realize my coffee is still at home. The next day, I’ll find the prior day’s coffee in the microwave, after I’ve gotten dressed and remembered that day’s coffee on the counter. It’s not that John Farrell didn’t at one point know that Hanley Ramirez was in the game. It’s that having been distracted by a question, the fact of his being in the game never made it out of the microwave and into the car.

Mitch Moreland Pitched the Top of the Ninth (0.5%)

When position players pitch in blowouts, it’s like grabbing a life raft after a disaster at sea. Or when you’re trapped in a conversation with the worst guest at a party, and someone breaks a glass across the room. You’re saved; you might escape. But then it becomes what you focus on. Who broke the glass? Is the host angry? Are there sharks nearby? Salvation can be so distracting. You were watching normal bad baseball before, and now you’re watching something different. The transmutation takes our attention off the other action on the field, and it follows predictable steps.

Step One: A position player is pitching and you’re excited. 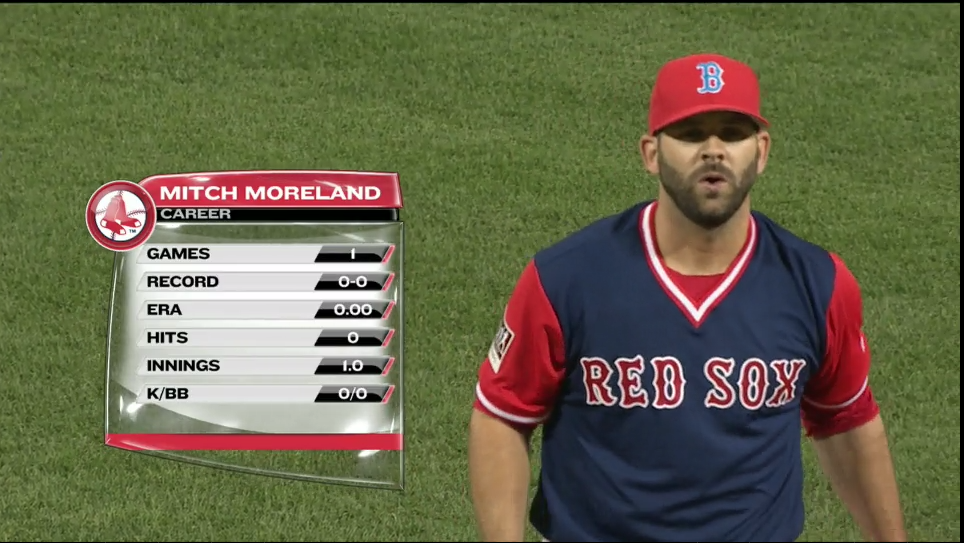 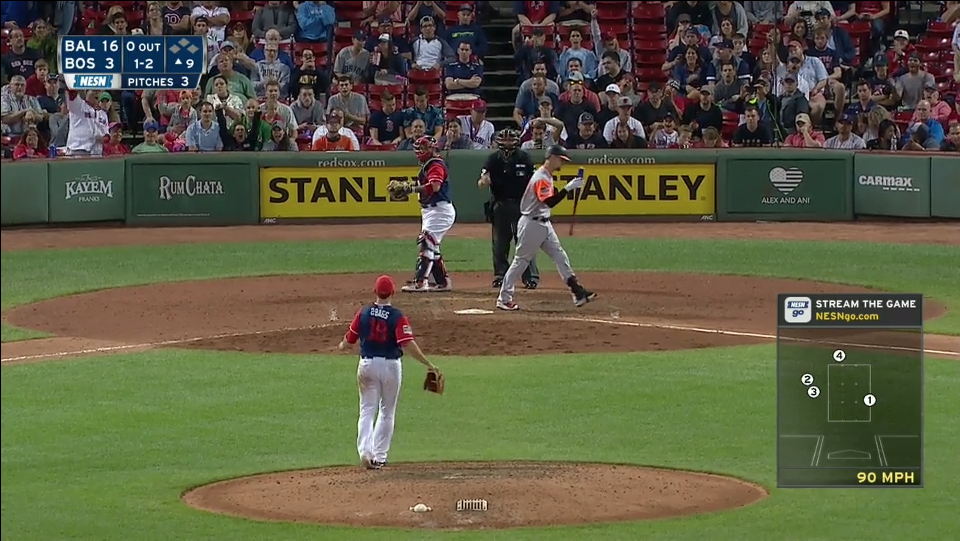 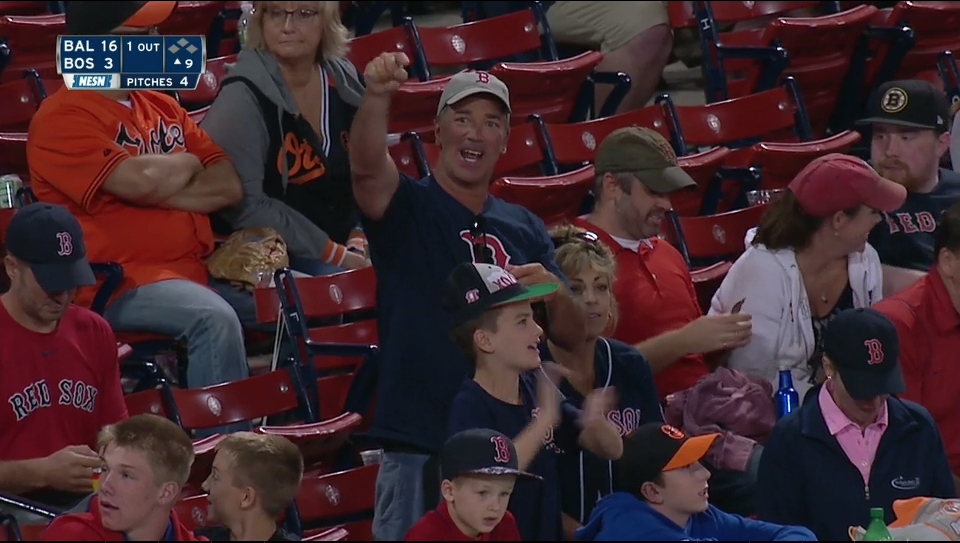 Yeah, you’re not going to be any help to us in the bottom of the ninth.

The passage of time makes liars out of a lot of us. Not that we mean to misremember important moments, but we do anyway. It makes moving forward easier. I was driving home once after a bad day at work and the car in front of me stopped too long at a stop sign. I honked, and the driver moved, and that was fine, but there was a pedestrian standing on the corner and the honking startled her. And I felt ashamed. I thought about that moment at 1 AM that night and at 3 AM two days later and in the middle of a meeting the next week. Chris Davis now has 1,020 career hits, but he had to get the 1,000th first, and I bet when he thinks back on it years from now, he won’t remember it came off a position player. His memory will protect him from that fact. What use is there in dwelling on such things? 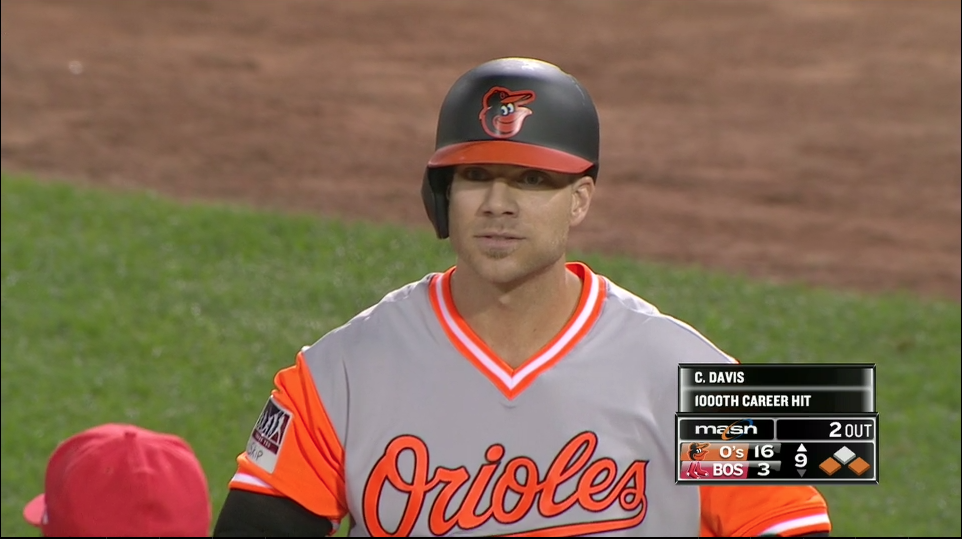 Kid A told Kid B the Unwritten Rule Concerning Snitches (1.2%)

Quietly, the wildest part of Chris Young getting back to the plate is the fact that he batted second. If he had led off the bottom of the ninth, we might have been able to attribute the mistake to everyone being in a rush to get home, and not having time to say “Hold on,” and suddenly he’s up there, and man, aren’t we just bone tired? But Young didn’t lead off. The broadcast came back from commercial break at 3:39:44; Rafael Devers’ line out was caught at 3:41:21. In between, Chris Young stood in the on-deck circle, whole minutes ticking by, preparing to illegally re-enter the game, in full sight of God and Fenway, and these two kids. 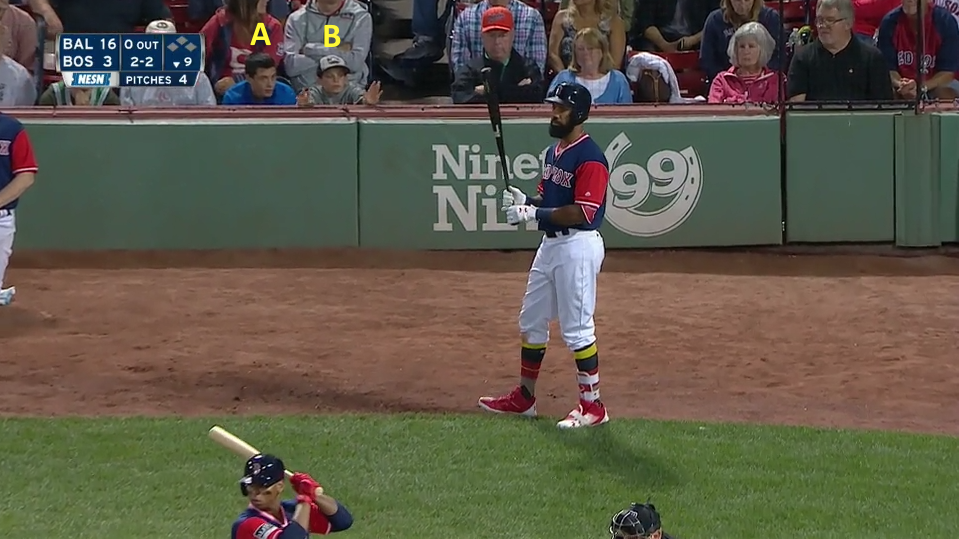 I think Kid B knows. He’s holding up his hands the way you do when you realize something. “Hey, wait,” he seems to say. Kid B knows that Chris Young is supposed to be in the showers, and he wants to tell a grown up. He’s a good kid. But that’s where Kid A comes in. Kid A knows stuff, too. Like, he knows that they’re Red Sox fans, and that telling would cause the Red Sox trouble, and that you’ll never live this down, Kid B. Wise words, Kid A. Good looking out. You never forget the day you learn that snitches get stitches.

The Players Weekend Jerseys Threw Everyone Off (2%)

I don’t mean to brag, but I watch a lot of baseball, and read a lot about baseball, and when I write about baseball, I often write about all the faces you’ll see while you are watching baseball. So, again not to brag, I know a lot of baseball players’ faces and could pick them out on the street. Oh, I wouldn’t bother them; they’re just trying to get coffee or gas. But I’d give them that little respectful nod you do when you want to be able to tell your friends you had a celebrity encounter but also get credit for playing it cool. I could spot them. And during Players Weekend, I must have said, “Wait, who?” 107 times. Like, who the hell is “Bird”? (Answer: Mike Wright) WHO THE HELL IS MIKE WRIGHT? Wait, Mike? Mark? You see how there could have been some confusion.

Forgive an obvious statement, but the job of every pitcher is to collect outs. Quick outs, slow outs, but three outs. Along the way, they face impediments to those outs. A manager might not let them stay in for all three; an umpire might toss them for a fastball that runs too far inside. Hitters, of course, try to put the ball in play. All potential speed bumps. And then there are the fans. Fans like to think that they are good helpers. They boo and jaw at opposing pitchers. They insult their mothers. Sometimes, they go so far as to shout out where the catcher is set up. Fans think they are good helpers, but they aren’t really.

Pitchers possess incredible concentration and focus, and they probably can’t hear you. You’re not getting in the way of their outs. Except on August 25. On August 25, Premature Home Run Celebration Dude (just behind Chris Young) and Wiggle My Hands Guy (our left of home plate, third row, two seats in) helped a little. It was late, and Mike Wright (hi, “Bird”) is only so-so. Wright didn’t notice it was Young at the plate, gave up a single, then plunked Rajai Davis the next plate appearance. For once, the fans got through. Such good helpers.

After the game was over, the NESN camera lingered on the Orioles dugout and you could see Buck Showalter conferring with the umpires. He knew. 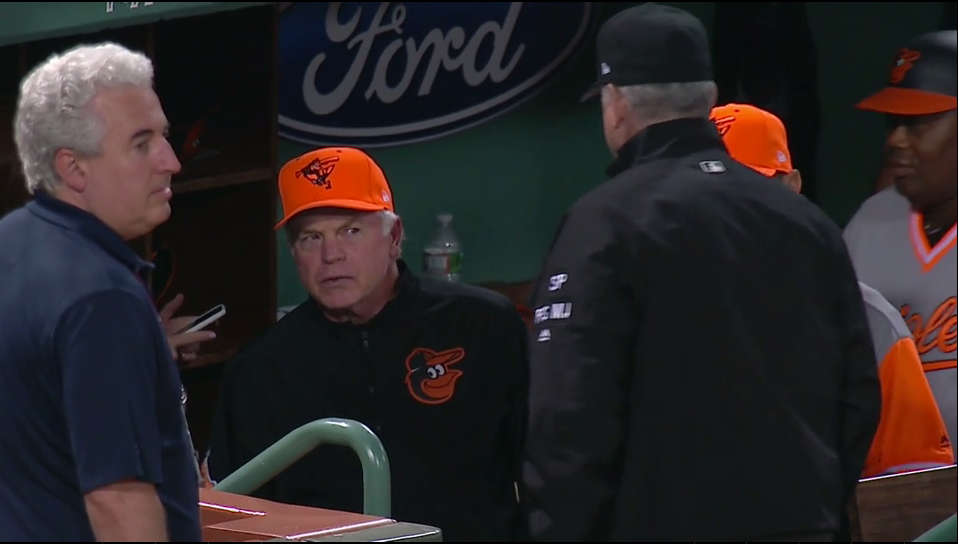 Buck knew, and he wanted to make sure that in a game that mattered it wouldn’t happen again, but he also granted the Red Sox this little bit of grace. It wasn’t a costly bit of grace, as the Orioles had effectively won already, but it was grace nonetheless. This might be the best managerial decision of the year. Buck knew the rules, but also knew that sometimes the rules just aren’t that important when presented with the opportunity to get to sleep 10 minutes earlier.

He was well within his rights to get a bit shirty, and embarrass John Farrell, and just generally drag this whole nightmare out, but instead he went, “Eh?” There may be no kinder small mercy than having your foot on your opponent’s neck and, rather than pressing down, letting them just go to bed.

[1] Jen McCaffrey at MassLive was one of the only people who wrote about the mix up at all. I asked her over email if she noticed the mistake in the moment, and she said, “When it happened, several of us in the press box were pretty confused. I was writing my game story, so initially I didn’t even notice, but I sit near the official scorer and he was like “…wait, what’s going on?”

You need to be logged in to comment. Login or Subscribe
mattyjames1
I really liked this. Thanks!
Reply to mattyjames1
mjnolan
This is neat and funny and I love it
Reply to mjnolan
MaineSkin
Always fun to learn a new unwritten rule in baseball. Nicely constructed. Thank you.
Reply to MaineSkin
Deadheadbrewer
I always love Meg's pieces, and this is a fascinating baseball moment to have captured in words so perfectly.
Reply to Deadheadbrewer
njpeacenik
great story and very well written.
Reply to njpeacenik
Tythelip
Mitch pitched the TOP of the ninth not the bottom. That would have made for an even wilder evening.
Reply to Tythelip
megrowler
D'oh! Indeed, that would have been a wild finish. Fixed now. Thanks!
Reply to megrowler
bobbygrace
I love the line "Yup, he's ready for bed." Another cause might be that everyone in the stadium was dazed by long exposure to the Orioles' blazing orange uniforms. (Real Baltimore orioles, the birds, are actually that color, by the way! It's amazing to see a wild thing that bright.)
Reply to bobbygrace
JPinPhilly
This is fantastic.
Reply to JPinPhilly
bpars3
I don't know why I thought about this, but when you mentioned Kid A, Radiohead came to mind. On that disc is a song called "Everything in its Right Place", which is, of course, the complete opposite of what took place in this game. It's always nice when I can merge baseball and Radiohead. Great article, Meg.
Reply to bpars3