Let’s do the create-a-pitcher thing. First, he throws hard. Like really hard. Maybe he has a four-seamer and a two-seamer that he can get up over 95 mph while working as a starter. And let’s throw in a breaking ball or two, sometimes GIF-worthy.

That describes a lot of good pitchers—Carlos Martinez, Jacob deGrom, Jeff Samardzija, etc. There are varying levels of success, but that’s a formula for a power righty. It also describes—perhaps disproportionately so—the most frustrating variety of pitchers in the majors: The ones with great stuff but poor results. They come along regularly, to tempt us, to populate columns predicting breakout players and create doubt in the space between our eyes and our brain.

Every year seems to bring us an obvious flame-throwing stud made good, but also a guy who can’t quite tap into that potential. We lose belief, not just in them but in our own ability to understand what makes a pitcher work. We will soon have a month full of high-stakes showdowns featuring the teams and players that did put it all together. Before that, though, let’s consider 2017’s sower of doubt: Braves starter Mike Foltynewicz.

Our eyes tell us that Foltynewicz should be good. Because of the four-seam fastball that averages 96 mph. And the two-seam fastball that averages 96 mph. And the slider that comes in at 87 mph. Our stats tell us Foltynewicz should be good because he has registered zone-contact rates well above the average for starting pitchers in two consecutive full seasons. While it's one tiny piece of a pitcher’s profile, it’s the part that tells you whether a pitcher has the raw stuff to make hitters miss on pitches they should be able to hit.

There are basically only two ways to be bad when you have an above-average ability generate whiffs on strikes: 1) Fail to throw enough strikes, or 2) allow dingers galore. If you’re going to be prone to one of them, you might as well make it no. 2, because that one could fluctuate wildly enough to produce a great season. The bad pitchers with good zone-contact rates seem to have absorbed this calculation, as they almost invariably have HR/9 numbers that could be confused for Corey Kluber’s ERA.

That logic seems to have guided Foltynewicz’s 2016 campaign. The 1.31 HR/9 probably didn’t sit well with him, and you can’t blame him for fiddling with some ways to bring that number down. To his credit, mission accomplished. Unfortunately, it didn’t unlock his potential so much as create a new remix of the ways good-stuff-bad-results guys can fail. (He has a 4.79 ERA in 154 innings, allowing opponents to hit .277/.349/.446.)

Despite that above-average stuff, Foltynewicz struggles in two-strike counts relative to his peers. Every pitcher wants to be in two-strike counts, but some are better at converting them into outs. To make a long story short, he has tried to get hitters to go fishing for breaking pitches, but found them notably unwilling to swing. And as counts go deeper, Foltynewicz usually turns back to velocity and hopes for the best. 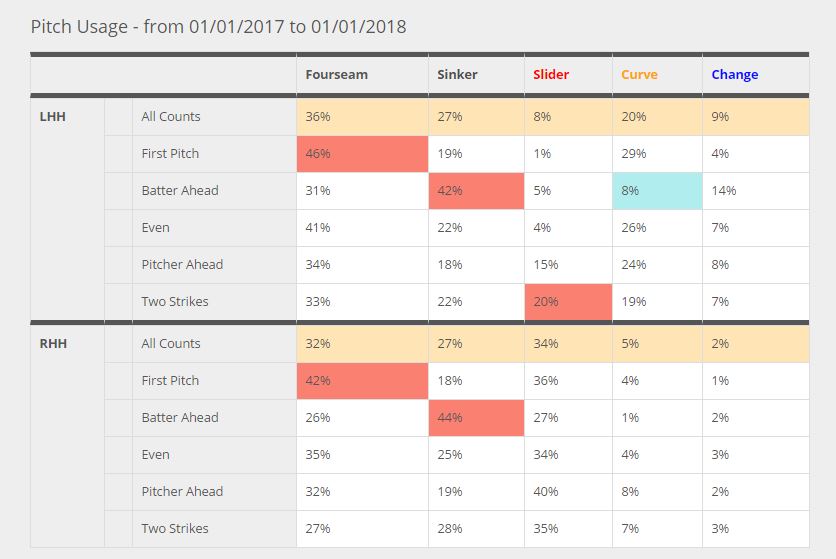 See, he really wants to throw his slider in two-strike counts. Problem is, the pitch is middle-of-the-road in terms of generating whiffs, and worse, it’s among the least likely sliders in the game to generate a swing. The curveball that he seems to possess just for when he’s ahead of lefties faces the same basic issues. Hitters are figuring out what he wants to do. They have swung less often at his breaking pitches each year he’s been in the majors, and this season, they’re swinging at fewer than half of them in two-strike counts (among the lowest marks in the league).

At least a portion of this problem could stem from a pitch-tipping issue. Rob Friedman—whose Twitter account is indispensable—first called attention to a way in which Foltynewicz was tipping his pitches late this summer. While it’s difficult to nail down exactly when it started in earnest, Foltynewciz has been displaying a hitch in his arm action on fastballs—sometimes seeming to literally “reach back” for more velocity—since early August. It's a matter of degree, of course, as to how noticeable and consistent the tell is from game to game, but it’s easy to find examples over what was a poor stretch for him.

At times, like during an August 11 start in St. Louis, it's almost indiscernible. He simply spends an extra beat on his coiling action before bringing his arm forward on fastballs …

… as opposed to sliders or other off-speed offerings.

It can appear that he stands up straighter or more quickly when a slider or curve or the rare changeup is coming. Other times, it seems so obvious that you think hitters just have to have noticed it. In Colorado, on August 16, his fastball arm action came to a screeching halt while his front foot hovered, just before everything kicked into gear and he drove forward.

His slider arm action, meanwhile, was still a smooth flow untethered from the step.

If a hitter picked up on it, given his tendency to keep breaking pitches out of the zone, they could effectively sit fastball and gain an extra split second for their troubles. Don’t let that specific issue color your thoughts of Foltynewicz’s future, though. Pitchers groping around for major-league success transform themselves on a regular basis, and this delivery quirk may have been an offshoot of some tweak in progress. Foltynewicz has changed the initial position of his hands at least twice since the beginning of 2016, including lowering them very significantly last summer. It’s not totally clear he has found a rhythm he likes with his hands starting down at belt level.

More importantly, remember that the unproven pitcher’s existence inside baseball’s cement mixer is a blessing as well as a curse. A year ago, a similar examination could have been written about Brewers starter Jimmy Nelson, who had everything click this year before an injury cut a stellar season short. Googling Nelson is an easy way to produce a list of virtually every adjustment possible for young pitchers. And yet, he wound up finding a combination that worked for him—better delineating the slider and the curve where he just sort of had one pitch before. Fully putting his four-seamer to work as a strikeout pitch.

It’s tempting to peruse Foltynewicz’s pitch data and prescribe some specific way forward. Be less predictable with the slider, we might say. Give the changeup more of a chance against lefties. Utilize the two-seamer more to limit loud contact, and on and on. And granted, some of it might be good advice. For now, though, let’s resist our impulse to will our vision into being.

No matter how many projections turn out accurately or how many trends continue apace, our understanding is chasing something it can’t quite catch. And that’s OK, we must occasionally remind ourselves when it feels like everything has been made clear by several thousand baseball games. It’s OK to know that the big righty has something else in there, potential yet to be converted to the kinetic, eye-catching currency of performance. It’s OK to have something to live on over the winter, once all the summer’s actual happenings have escaped our imaginations and burned themselves into reality.