Last Wednesday evening, a new record was set. You probably saw it.

BREAKING: Alex Gordon has homered in Toronto and we have fresh history.

It’s true! There have been more home runs hit this year than in any previous season. Here’s proof: 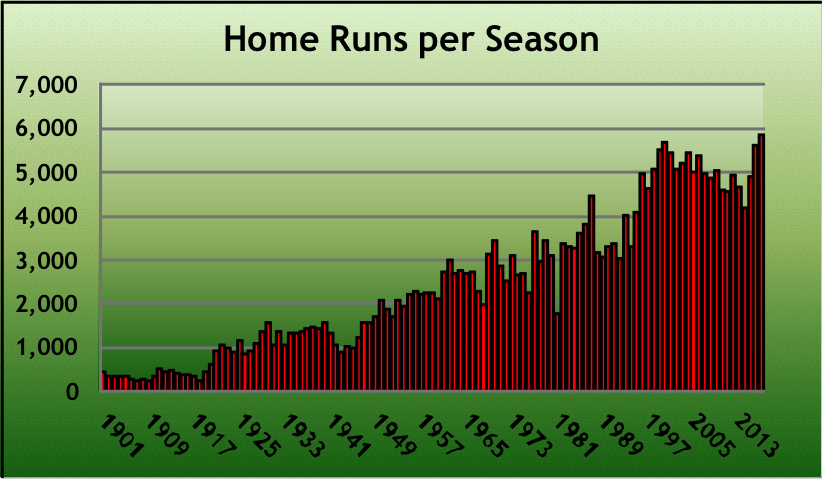 Wait, that’s misleading (because of league expansion). How’s this: 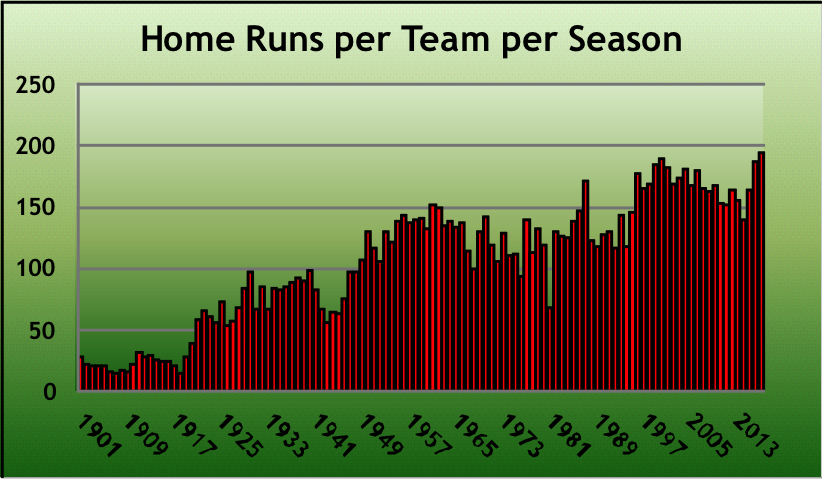 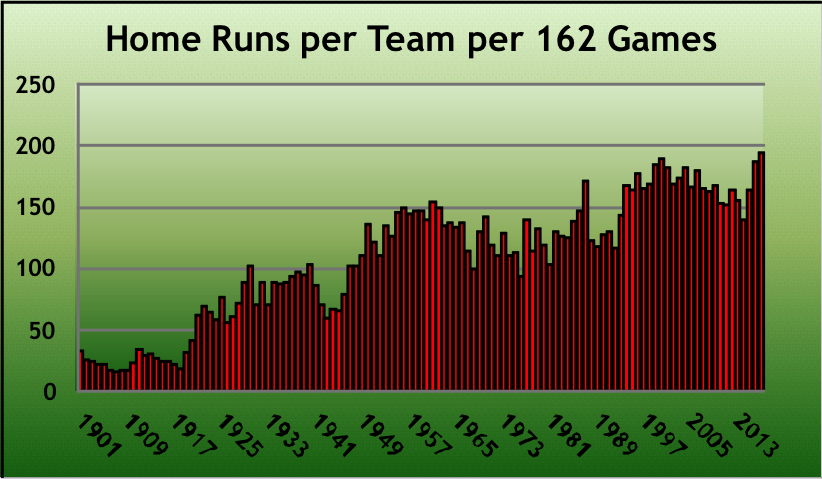 OK, that’s it. No matter how you slice it, 2017 is a record-breaking year. (The chart above represents the actual home run total for 2017 through Saturday night, not adjusted for the rest of the schedule, so there’s a good chance that last red bar will wind up extending above the 200 line.) And it’s not even done yet! More records to come.

If we’re seeing an overall MLB record for home runs, we should be seeing other homer records too, right? It logically follows that if we’ve had more home runs than ever before, we should be looking at some teams setting new records as well. Maybe some individual records, too.

I went through all 30 clubs, and have listed their team and individual home run records below. Note that for teams that have moved, I’m going to consider the entire team’s history: New York and San Francisco Giants, Expos and Nationals, etc. But before listing them all, let me get to the conclusions here, so you don’t have to scroll through a bunch of numbers and words.

First, the rising tide of home runs has indeed lifted a lot of team home run record boats. (Give the metaphor a few minutes; it’ll recover.) Five teams have already set new records for home runs in a season. Three more will likely set them. But every one of those eight teams entered the season with a club home run record that was at least 15 below the median of 233. In other words, we’re getting new team records, but the records being broken are uniformly among the softest in baseball.

Second, by contrast, only two teams appear likely to set new records for individual home runs. One team, the Marlins, is led by one of the game’s greatest sluggers who is finally enjoying an injury-free season (Giancarlo Stanton has already played the most games of his career). The other, the Royals, had the lowest individual record in baseball. While this contrast—record number of home runs overall, hardly any new individual records—may seem inconsistent, it meshes with my finding earlier this year that the distribution of home runs among players has become more equal even as the total number of dingers has climbed.

Third, the latter point refutes the evergreen “Steroids II” narrative. This tired trope, given a new airing last week, ignores award-worthy research showing that the ball is livelier (by Ben Lindbergh and Mitchel Lichtman here, and Rob Arthur here) and even-a-dummy-like-me-can-do-it research showing that batters are hitting more balls in the air. Beyond that, it glosses over the fact that we’re simply not seeing the gaudy home run figures that were commonplace 15 years ago: 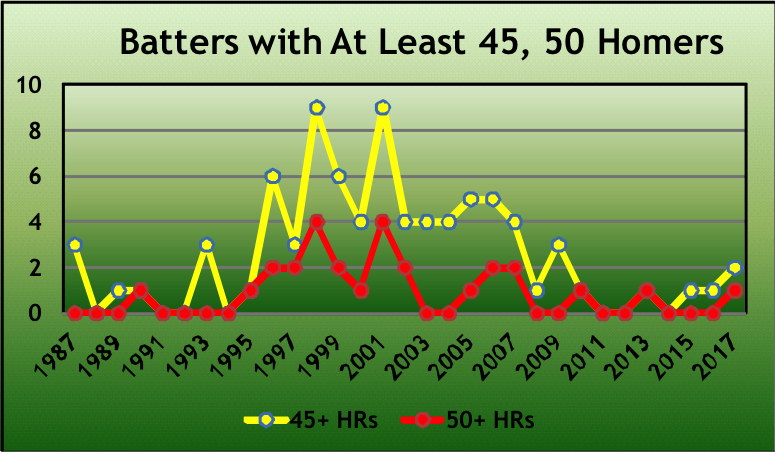 Here are the records, by team, alphabetically, with records set this year in bold.

Diamondbacks: Team record 216 in 1999, individual record 57 by Luis Gonzalez in 2001. To date: 211, 36 by Paul Goldschmidt. (Decent chance that they’ll set a new club record, with a big assist from midseason pickup J.D. Martinez, who has 27 in just 56 games since coming over from the Tigers.)

Marlins: Team record 208 in 2008, individual record 57 by Giancarlo Stanton in 2017. To date: 189. (The 2008 team played in the more homer-friendly Dolphin Stadium, but even with Stanton’s heroics, the club isn’t going to come close to the franchise record.)

Mets: Team record 218 in 2016, individual record 41 by Todd Hundley in 1996 and Carlos Beltran in 2006. To date: 217, 29 by Jay Bruce. (A team that’s one of the biggest disappointments in baseball, with five of its top six home run hitters either traded or disabled, will set a new club record for home runs. Before you jump to any PED-related conclusions, though, the active team leader is Wilmer Flores with 18.)

You need to be logged in to comment. Login or Subscribe
MikeSnyder
For the Mets, it would be Todd Hundley (not Todd Helton) with 41 HR in 1996.
Reply to MikeSnyder
TGT969
The Pirates played in the largest park in MLB for 61 years-Forbes Field. It had a 457' center field. It was so big the batting cages sat out side in the field of play!
Reply to TGT969
mainsr
I didn't know that, thanks! And, of course, PNC is pitcher-friendly. But a brief perusal of our stats on park factors indicates that Three Rivers was an average-to-above-average hitter's park, and they were there 30.5 years.
Reply to mainsr