Last year, Sam Miller wrote about the minimum-innings threshold. He noted that the number of pitchers who qualify for the ERA title had dropped precipitously as innings per start have declined. He explained the causes and proposed a solution.

In order to qualify for the ERA title, a pitcher must pitch one inning per game his team played. That means that pitchers must usually compile 162 innings per season since 1961 (American League) or 1962 (National League). Before then, when schedules were shorter, the standard was 154. A minimum standard for ERA qualification is similar to the minimum standard for batting title qualification, which is 3.1 plate appearances per team game played. (There is one difference: In one of baseball’s more obscure rules, hitters who fall short of qualifying for the batting title can still qualify by having hitless plate appearances added to their total in order to reach the minimum standard. No such fudge factor exists for ERA qualification.)

The ERA qualification standard, though, covers more than ERA. For counting stats, like wins or strikeouts or home runs allowed, a minimum standard isn’t relevant. Through Tuesday’s games, Brad Peacock, who will not qualify for the ERA title this year (he has 121 innings), had 153 strikeouts. Julio Teheran, who’s already qualified (175 1/3 innings), has 143 strikeouts. We don’t discount Peacock’s strikeout total because he didn’t pitch 162 innings.

But for rate stats, the ERA qualification number is relevant. And rate stats are generally more informative than counting stats. We look at ERA, not total earned runs allowed. We’re generally more interested in strikeout, walk, and home run rates than the totals on a pitcher’s ledger. Fantasy players care about WHIP, not total baserunners allowed. Pitcher valuation formulae use FIP and DRA. The qualification line of demarcation determines whether a pitcher is relevant in our discussions of league leaders.

And that’s fair; of course Kenley Jansen has a superior K/BB ratio (14.4) to Corey Kluber (7.4). They’re both amazing pitchers, but Jansen will likely throw fewer than 70 innings this season, while Kluber will pitch over 200. They don’t face similar demands, so their rate stats will differ. That’s fine if the number of ERA qualifiers per season remains pretty constant. But it hasn’t.

Here are the seasonal totals since 1962, when both leagues had the 162-inning standard (again, including 2017 games through September 19): 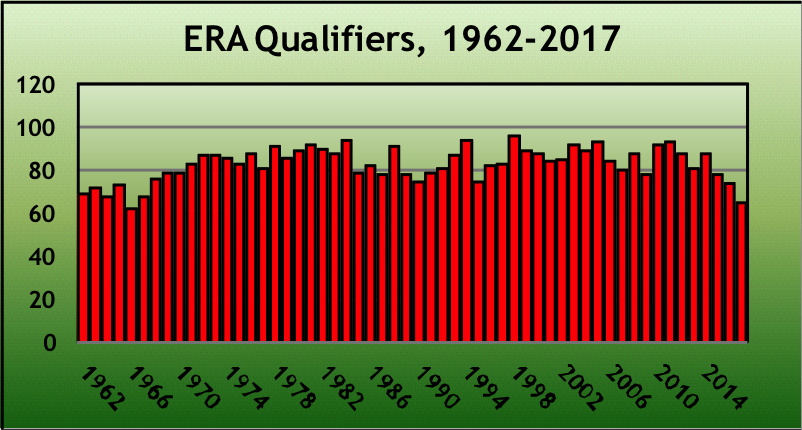 But you’re smart enough to say, “Wait, you can’t do that. Yes, we’re on track for more ERA qualifiers this year than in 1966, by a count of 65 to 62. But there are 50 percent more teams now than there were in 1966.” Fair enough. So let’s look at ERA qualifiers per season per team. That tells another story. 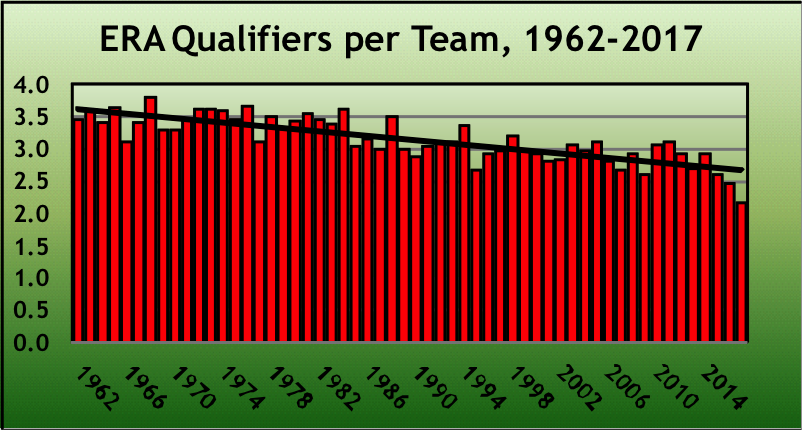 And it’s a story that has been developing since, well, forever: 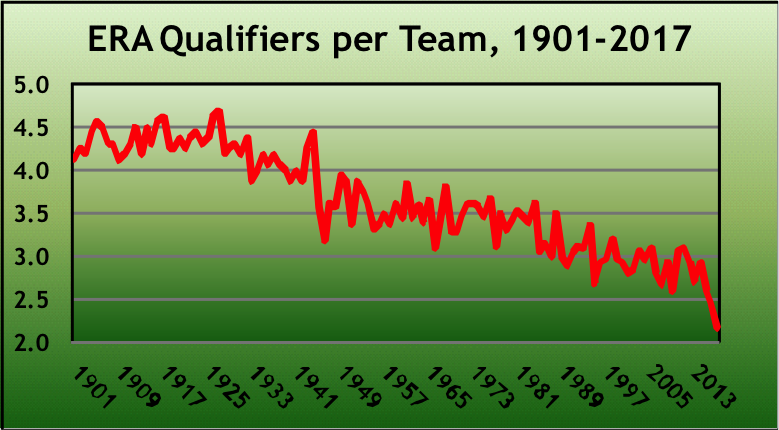 Our former BP colleague, John Choiniere, recently asked: “How common/uncommon is it for a team to have no ERA-qualified pitchers?” Two current BP colleagues, Harry Pavlidis and Rob McQuown, came up with a list of the lucky 13 teams that had zero ERA qualifiers. I’ve listed them below, along with some relevant statistics:

Let’s go over those teams.

1957 Kansas City A’s. Team IP leader: Ned Garver, 145 1/3. For the first 95 years of the American League, this is the only team that didn’t have an ERA qualifier. Garver and Tom Morgan (143 2/3 IP) came close. In this, the team’s third year in Kansas City (it moved on to Oakland in 1968), only two pitchers had more than 20 starts: Garver with 23 and Alex Kellner with 21. Ralph Terry was third with 19; the 21-year-old righty would spend another year and a half in Kansas City before being traded to the Yankees, for whom he compiled a 3.44 ERA over 1,198 innings. This was when the A’s were a de facto farm system for the Bombers.

1995 St. Louis Cardinals. Team IP leader: Mark Petkovsek, 137 1/3. Two points. First, this was a strike-shortened season, so don’t take Pekovsek’s 5 2/3-inning shortfall too seriously. Second, Mark Petkovsek? This was his only season in a nine-year, 390-game career in which made more than 10 starts. This team cost Joe Torre his managing job; he was fired with a 20-27 record. Weird year all around.

1998 St. Louis Cardinals. Team IP leader: Kent Mercker, 161 2/3. And Todd Stottlemyre had 161 1/3, so they barely missed. This, of course, was an OK team, with a winning record. You probably remember that Mark McGwire hit 70 home runs for this club. You probably don’t remember that the pitcher with the fifth-most innings on the club was the aforementioned Mark Petkovsek.

2006 Tampa Bay Devil Rays. Team IP leader: Scott Kazmir, 144 2/3. Kazmir got hurt and didn’t pitch after August 22. No. 2 starter Casey Fossum’s last start was August 29. Rookie James Shields pitched the third-most innings but didn’t get called up until the end of May. So this was more a timing issue than one of ineffectiveness, though the (Devil) Rays were certainly a bad team. But not for long: They were the surprise American League champion two years later.

2009 Cleveland Indians. Team IP leader: Cliff Lee, 152. The Indians had five other starters who pitched between 121 2/3 and 128 1/3 innings. But nobody started more than 24 games. Lee would’ve easily surpassed 162 innings but he was traded with Ben Francisco to the Phillies at the deadline for a package that brought them Carlos Carrasco. Lee pitched his last 79 2/3 innings in 2009 for the Phillies, then another 40 1/3 in the postseason.

2012 Colorado Rockies. Team IP leader: Jeff Francis, 113. Yep, 113 innings led the team. And nobody else had even 100. They didn’t come close to 162. This is the year the team went to a four-man rotation, limiting each starter to 75 pitches per start. They adopted the move in June, when their pitching staff stunk. After the change, it continued to stink. But the starters wound up with a lot fewer innings.

2013 Houston Astros. Team IP leaders: Dallas Keuchel and Lucas Harrell, 153 2/3. And Erik Bedard pitched 151 innings. This was, of course, a famously bad team that was tanking rebuilding. Whatever, it seems to have worked.

2015 Colorado Rockies. Team IP leader: Jorge De La Rosa, 149. This, it seems to me, is where things turned a corner. To this point, every team that failed to have a pitcher qualify for the ERA title had some sort of excuse, whether absences or utter ineptitude. The Rockies, yeah, pitched at Coors Field and were bad and everything, but their top two starters, De La Rosa and Kyle Kendrick, made 26 and 27 starts apiece. Give them an average start length of 6 1/3 innings, and they’d hit 162. But they didn’t. De La Rosa averaged 5.7 innings per start, Kendrick 5.3. You have a hard time getting to 162 innings that way.

2016 Pittsburgh Pirates. Team IP leader: Jeff Locke, 127 1/3. The team’s second-highest total was Juan Nicasio’s 118, and he was primarily a reliever. This team was hit by a lot of injuries, and Locke was arguably its weakest starter (Francisco Liriano provides the argument), but you’ve gotta have somebody start those games.

2017 Chicago White Sox. Team IP leader (to date): Derek Holland, 135. Yeah, they’re a bad team. Yes, they’re in the middle of a rebuild. Yes, they traded Jose Quintana across town, and he’s surpassed 162 innings overall. But there have been plenty of bad teams that traded their best pitcher and still had an ERA qualifier. The 2014 Red Sox, at 71-91, traded Jon Lester and still got 170 1/3 innings from Clay Buchholz.

It seems that current pitcher usage—shorter starts, more innings taken by relievers—will continue to erode the number of pitchers qualifying for the ERA title. On poor teams, or those hit hard by injuries, failing to have any ERA qualifiers seems likely to become the norm.

What difference does it make? As the ERA qualifier club becomes more exclusive, our comparisons capture fewer pitchers. In his article, Miller proposed changing the ERA qualification standard to 130 innings. By that standard, Clayton Kershaw (149 IP), Jacob deGrom (148), Michael Fullmer (159), Carlos Carrasco (146 1/3), and Steven Wright (156 2/3) would have joined the top 25 in ERA last year. The bottom 25 would’ve been overhauled. Of the 25 pitchers with at least 130 innings pitched and an ERA over 4.65, only 12 logged 162 innings.

All told, the set of ERA qualifiers would expand from 74 to 106, an average of 3.53 per team. If that sounds like too many, note that from 1901 to 1976, there were more than 3.53 qualifiers per team in all but 15 seasons. A more robust dataset would provide more robust comparisons. Or, as Miller put it, regarding the 162-inning threshold: “If it’s to capture in a leaderboard or statistical chase all the pitchers who were, essentially, regular pitchers in their clubs’ rotations, it’s a failure in need of adjustment.”

You need to be logged in to comment. Login or Subscribe
harrypav
The best part of helping with this research was finding Ned Garver in it.
Reply to harrypav
mainsr
True. Finding Ned Garver is liking digging in the pocket of a pair of pants you haven't worn in a couple years and finding a $20.
Reply to mainsr
ironcityguys
Ned Garver just passed away at 91 this past February here in NW Ohio. He graduated from Ney HS back when Ney had a high school. My college roommate used to talk about the stories Ned would tell because he grew up in Ney, Ohio also. Evidently Ned was so much a hometown boy, he returned to become mayor of Ney in his later life. I mention Ney (pop. approx. 350) because if you're ever on route 15 on the way between Defiance and Bryan, Ney has one stoplight. Otherwise you'd miss it.
Reply to ironcityguys
mainsr
Thanks for sharing that; I didn't know. Garver, not that this is much of a distinction, compiled the 13th most wins in Browns history and the most since WWII. And those of us who are EW listeners will always remember him as (I think) the very first cold call.
Reply to mainsr
jfranco77
In addition to the awesomeness of Ned Garver's cold call and cult hero status on Effectively Wild, I love that he's from NW Ohio. My family is originally (I mean, not *originally*) from Bryan so I love seeing the names of all these towns.
Reply to jfranco77
ironcityguys
I love the fact Ned Garver went 20-12 for the 1951 Browns when St. Louis finished 8th in the AL and lost 102 of 154 games. He was a very solid pitcher in that era.
Reply to ironcityguys
mainsr
He was 26th in the majors in PWARP! Bet he didn't know it at the time.
Reply to mainsr