The Language of Peace

I met a man earlier this year. Let’s call him Greg. The past decade of Greg’s life had seen a series of spiraling traumas. His home was foreclosed on during the housing crisis of the past decade. The stress and despair of the incident led to divorce, which counted as trauma number two.

The man who bought the property at the courthouse was a liar and a crook. He told Greg he could continue to live in his home if he paid him rent, and after a few years he would sell the home back to him if he could get financing. Because Greg had never been one for official notices or paperwork, no formalized agreement, lease, or purchase option was ever written up. Greg simply sent a check every month to stay in his home. When the new owner was in turn also foreclosed on Greg had no idea, and continued to pay his rent for years to someone who now did not even own the home in which he lived.

The final issue was the diabetes, which unemployment, fragile mental health, and lack of diligence with doctor’s appointments and medication had about a year ago led to the amputation of his right leg, just below the knee.

I found all this out in Greg’s living room, as he told it to me with profanity laced invective while looking at a piece of paper agreeing to vacate his beloved home in 30 days. You see, the second foreclosing entity weren’t in the mood to play around. You don’t come into acquisition of a property anywhere near Seattle these days and not put it on the open market. So it had fallen to a series of official notices, first mailed and hand delivered, repeated visits from the police, a few real estate agents, many of whom Greg scared off with his understandable rage, and, finally, myself, to come to a peace, and avoid him being forcibly removed from the property.

Greg and I sat in his living room, his ex-wife at his side. She had come to oversee things, still caring about Greg and worrying about someone taking advantage of him like his duplicitous former-landlord. She assured me that Greg’s parents are still living in Oregon and he has a place to stay, he just needs to agree to do so. But Greg is still listing off his woes, and seems only partially aware I’m not the cause of them. Tucked behind him, dusty and worn and faded from a decade or so in a window, sat an old sign from the 1995 Mariners. It read “Refuse to Lose”, trimmed in that most quintessentially 90’s teal. I was tired of being yelled at, so I interrupted and told Greg I liked his poster. He stopped, looked at me, and for the first time, was silent. 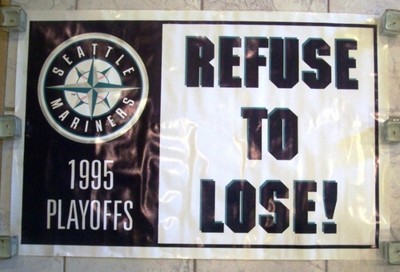 The next 45 minutes were spent in the other corner of the house. It was there that Greg kept his baseball cards, at least many thousands of them. Greg estimated there were “hundreds of thousands”, and that they “must be worth a fortune”. Our time in there was spent reminiscing over Pete O’Brien, of laughing at the self seriousness of the ‘90 Score set, lamenting Kevin Mitchell’s lone year in Seattle.

After some time, Greg asked me if I wanted the cards. I told him thanks, but I had no place for them. His ex-wife assured me their children would come by and pick them up. He pointed at a forest green Seattle Sonics t-shirt: “I bet you remember that too, don’t you?” I assured him I did. Greg paused again, looked around the “card room” as he called it, and sighed. NEW YORK – Alice Spector is 4 years old and a big Mets fan, with the young Queens resident having decided early in her life that the Yankees are “too serious” for her tastes. This is largely because they have no mascot, but remarkably perceptive nonetheless.

Her favorite player on the Mets is Asdrubal Cabrera, also known as “Droobal” or “Droobie,” because Alice is short and Asdrubal, until very recently, was the Mets’ shortstop. This has been a stressful season, not only because of the Mets’ struggles and Cabrera’s trips to the disabled list, but because with the emergence of Amed Rosario at shortstop and a general sell-off of veterans, Cabrera was the subject of a lot of trade speculation.

Cabrera has remained with the Mets, and Alice was glad to know at both the July 31 and August 31 deadlines that her favorite player was not, as she calls it, “switched.”

I’ve occasionally asked Alice, before leaving to cover games, if she had anything she wanted me to ask Asdrubal. She’s done so at various times throughout the season, including once at the very beginning of the season, as documented in part of a Twitter thread containing Alice and her 2-year-old brother Sean’s baseball thoughts and questions. Recently, I got a chance to pose some of those questions, and Cabrera was nice enough to answer.

It is, needless to say, my favorite Q&A interview that I’ve done.

A: Let me think about it. Yeah! I do. I do. Everybody does. It’s exciting.

Q: How did you learn to speak Spanish?

A: Spanish, or English? Because that’s where I’m from.

Q: Maybe how did you learn to speak English?

A: I’ve spent many years here in the United States. My first year that I was here, we got a teacher to teach us to speak English.

Q: Why are you not the shortstop anymore?

Q: I’ve tried to explain that there’s a new shortstop, and she was not having it.

Q: Why are the Mets so silly and hit home runs all the time?

A: I don’t know. You’ve got to ask the hitting coach. I’m not sure about that.

Q: Are you friends with Mr. Met and Mrs. Met?

A: Sure. I am friends with everybody here. I love my guys over here.

Houston, A Week Later and a Generation Earlier 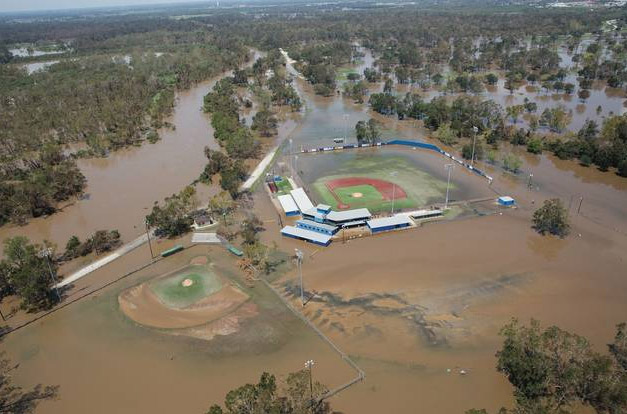 I was fortuitous enough to live for 18 months in Victoria, Texas, still sunken in floodwater. Most federal judges work in the cities, and as such, my job applications went to Tucson and Milwaukee and Raleigh and Detroit; where I landed, in what remains the best job I’ve ever had with the best boss I’ve ever had, was the biggest town for a hundred miles in all directions, but one that contained just 60,000 souls, a couple of hospitals, and one truly top-notch local bar, a place where you’d stumble across a lawyer who shares a last name with your great grandma’s second husband one night, hear literally unbelievably good Pearl Jam karaoke (like as in you didn’t realize it was karaoke until you wandered into the other room) another, and meet some kids who 100 percent know where the best basement hardcore shows are on a third. What you also get in a town that size is low-level baseballâ€•an A-ball team if you’re lucky, but more likely a collegiate-summer-league franchise. In Victoria, you’re not lucky.

And yet, you are. The end of baseball season came early, and the fields will take time to restore, but it will be restored. The park is charming, having hosted baseball without apparent major renovation since the Greatest Generation were babes. You’ll also feel like there’s still something about the fabric of a local community, what with the folks who come out four nights a week greeting each other by name and asking after mom and them; with the real-estate agent tossing the first pitch despite certain gentle ribbing of friends and neighbors; with the youngsters distractedly dreaming of the big time blessedly free of cynical notions that whatever the big time is, this ain’t it.

Is the baseball great? No. But you’ll still catch a glimpse of some kids with more future in baseball than your average Lukas, Masen, or Jayden. In my case, that meant a few future indie leaguers, at least four late-round draftees, including one who is still pitching for money all these years later, and, not least, Bryson Myles, a sixth-round pick who reached Triple-A and was mentioned in this BP writeup of Hunter Dozier. Can you tell which are which from your seats on the first-base side? Of course not; if you could, you’d get paid to do so. Just take it in.

(Editor’s note: Because of circumstances that were entirely within the present editor’s control, Mr. Delp’s Little League story was omitted from Monday’s omnibus, and is instead presented here. Our apologies to the author, and to the public who received, without their knowledge, only fourteen-fifteenths of their deserved, original enjoyment.)

The summer after my sophomore year in high school, when I was about 5-foot-5 and 120 pounds, I was the leadoff hitter for my American Legion team. You can probably guess why: I had a really small strike zone, could get down a bunt and had enough speed to steal the odd base.

In late June of that year, we were getting ready to play against a team who had one of its pitchers drafted in that year’s MLB draft. The day before the game, we found out he would be starting against us.

After a day of fearful anticipation, I stepped into the box just hoping not to completely embarrass myself. Four pitches later, I was on my way to first base with a walk. I hadn’t done anything, but I was pretty impressed with myself. I had gotten on base against a pitcher who had been drafted! If the transitive property held, maybe I was better than I thought. By the time I got to first, I had already figured out how I was going to steal second and eventually score somehow. I heard my coach pumping up the bench saying, “See, we can do this. Let’s get him in.”

I was less than two steps into my lead and I honestly never saw the pickoff throw. It was that quick. What had been exhilaration just seconds before had turned to despair. Unfortunately, I had done exactly what I was supposed to do. I had set the tone for the game. We lost 11-1.