I’ve never liked watching perfect games. That’s not to say that I don’t care about perfect games, or think they’re any less of an achievement than they are. I just don’t really enjoy them.

The trouble with perfect games, and Rock Band, and parenting, is that they’re achievements of negation, where the act is not in doing something spectacular but in avoiding unforced error or preventing the opponent from doing something easily achievable. Hitting four home runs in a game only takes four separate microseconds to achieve, while the perfect game is a three-hour high-wire act. But in the moment, while the former experience brings hope and joy, the latter is a psychological minefield, totally out of the viewer’s control. Perhaps this is intentional; perhaps it’s meant to make our heroes seem inhuman. I can never quite believe they are.

Last night Rich Hill was essentially perfect through 28 batters faced–essentially, because even the concept of a perfect game relies on the prowess of eight other men. He fulfilled the obligations we demand of literally every pitcher since Cliff Lee five years ago: nine innings. No runs. No hits. One error. Because of other people, it was not enough. And then: 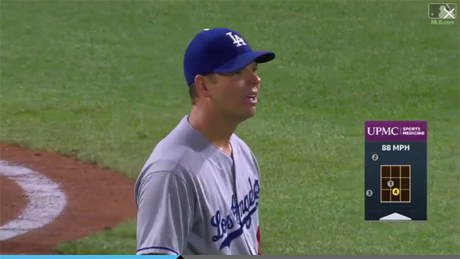 Ordinarily, in these moments, we’d look for some icon among the forty thousand, a fan with an outstretched glove or a child caught halfway between hope and tears. Perhaps it’s Granderson slamming into the fence, outstretched glove just shy. Or it’s the gatorade tumbling down on Josh Harrison, who has won the game, and already forgotten about his opponent. But this moment is about none of those things. It’s about Rich Hill, an aging man, alone, watching what we watched: the gunfighter already shot.

It is a bad pitch, center-cut fastball at 88, a late evening pitch. Harrison swings, leg not fully extended, as if he too is surprised; Barnes’s glove moves inward from the outside corner, then snaps his glove up to frame the ball that never arrives. Strangely, on replay there’s no single frame of epiphany: the action slides from one state to the other, success to failure, a false dusk. As soon as Harrison’s bat moves toward the zone Hill is already lurching to his right, a sad Fisk-like gesture, willing the pitch to move in further, like a bowler who knows he’s missed the headpin.

Early in season two of Monk—the Tony Shalhoub-starring, Emmy-winning dramedy about the eponymous obsessive-compulsive detective—is an episode erected on top of baseball’s place in American culture. The episode hinges on the shared cultural significance of the game: its records, its supposed innocence and subversions of that idea, and its role as a touchstone for both kids and adults. A billionaire and his wife are murdered, and, after a little bit of poking around, Monk discerns that the wife was having an affair with baseball player Scott Gregorio. Gregorio, we learn in the cold open via a well-executed radio play-by-play, is only three home runs short of breaking the single-season record of 73 home runs set by Barry Bonds proxy Darryl Grant. Gregorio slumps mightily in the last few games, however, and falls short. A few red herrings and puzzle pieces later, and Monk remembers that the man on surveillance video tied to the murder (a young Rainn Wilson, pitch perfect in the role) is the man who caught Grant’s original record-breaking home run ball.

The value of the ball is the motivator for the murder. Wilson’s character desires to sell the ball after being laid off, but finds no buyers as Gregorio closes in on the record. The ball’s $3 million price tag is threatened by a shift in cultural value. Only because of the shared knowledge of the record and the social value it possesses does the ball have any value at all as a commodity. It’s an object borne purely of nostalgia, and a bitingly ironic ending drives home that point: Sharona, the perpetually underpaid assistant, finds the record-breaking ball chewed up by Wilson’s character’s dog, and laments the fact that she can’t sell it. 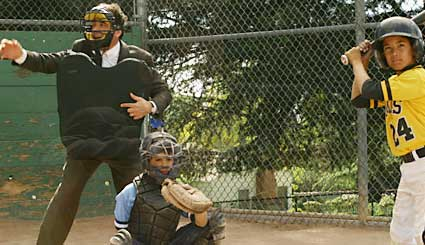 Luckily for us, the baseball fans, Monk doesn’t just dip its toes in the professional game and its cultural centrality. We are also treated to a subplot that pits Captain Leland Stottlemeyer’s son against Sharona’s son in a Little League game, gifting us a surplus of fun character moments. Stottlemeyer’s kid is actually too old for the league, but the police captain has bribed officials by forgiving parking tickets; Sharona’s son receives hitting lessons from Gregorio, who preaches “HELP” (hands together, elbows up, level swing, patience); and Monk steps in to umpire a game because he is the only observer without a child playing. Monk dons the chest protector like Leslie Nielsen’s Frank Drebin in The Naked Gun, obsessively cleaning home plate and waffling between calling pitches a ball or strike. The depiction of youth baseball is modest and true, a light satire of the over-seriousness of parents and the ritualization of the admittedly weird role of the umpire.

It might be trite to praise the episode’s attention to baseball detail as something akin to Monk’s own attention to detail, but I’ll do it anyway. From the moment we are introduced to the title character at the Little League game, fretting over very literal crooked numbers on the scoreboard, Monk concerns itself with a few of the stranger things about baseball. When Monk’s therapist asks him about spending time with Sharona’s son, Monk admits that it hurts, as he never had the chance to have a child of his own before his wife died. In 45 minutes, Monk shows up the maudlin Field of Dreams and countless other films, successfully plumbing the intricacies of baseball’s role as an agent of familial connection and disconnect. 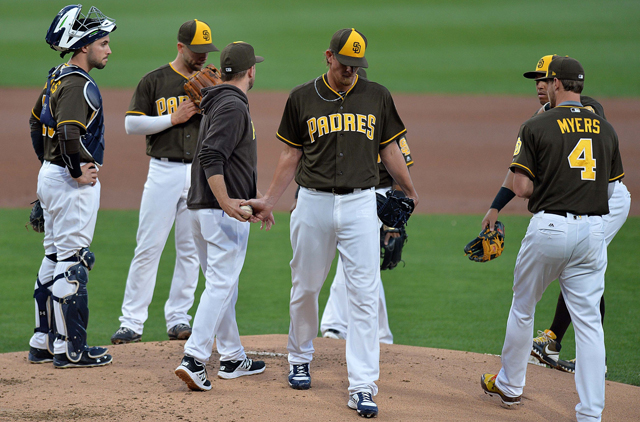 Imagine a game where every single hitter is Nick Markakis. Nick Markakis is at the dish, and he’s on deck. It would be terribly boring. The same is true of pitchers. We don’t want everyone to be Wade Miley or Kevin Gausman, and Jered Weaver wasn’t. He was Jered Weaver, the man with the slowest fastball in the game. Weaver wasn’t a typical pitcher, and that’s what made him wonderful. It’s easy to forget that Weaver was, at one point, a brilliant pitcher. He strung together three seasons from 2010 to 2012 in which he never finished lower than fifth in Cy Young Award voting, and made the All-Star Game all three years. For a time, Weaver was feared, and rightfully so. He had a fine career.

Those times feel so long ago, though. Perhaps it was because his fastball was averaging 84 mph at the end, and because he’d moved on from the Angels to the Padres, that we mentally assume Weaver is older than his actual 34 years. Baseball is a strange sport in that because there’s so much of it, time passes in a strange fashion. Mike Trout feels like he’s been up for at least a decade and a half, but he’s just 25. It feels like it’s been forever since the Royals won that insane Wild Card game against the A’s, but it’s just been a few short years.

Not all outliers are benefitted by their status. He was the butt of many jokes because of his status as an outlier. But Jered Weaver’s place in the game made the game richer. He was a curiosity that demanded attention, if only for just an inning or two. Weaver pitched a whole season with an 84 mph fastball last year. That’s incredible. It didn’t go well, but it was incredible nonetheless.

Weaver was slow, but he did it. He did things his own way, and he still does. The typical athlete statement-screenshot he posted to announce his retirement was of a tweet draft that was actually within the 140-character limit.

Weaver could have posted that tweet. Whether he realizes that he could have tweeted that statement out in a non-screenshot form remains to be seen. Perhaps he saw a trend of many athletes posting screenshots as a way to announce things and felt it was right. It was weird way to announce a retirement, just like Weaver was a weird pitcher. And in a way, that’s pretty poetic.

You need to be logged in to comment. Login or Subscribe
TGT969
Patrick, outside of the 2013 Wild Card game here that ended 20 years of
frustration last night's near no-no was the most remarkable game I've ever
attended. Bucs starter Williams rain though the raindrop for 8 innings (and
a rare 100+ pitches) while we could not get a loud foul.

It was a game I and many others in Pittsburgh will not soon forget!
Reply to TGT969