On Monday, I discussed the quirky Rule 9.16(i). Major League Baseball Rule 9.16, Earned Runs and Runs Allowed, covers the allocation of runs to pitchers for scoring purposes. Subparagraph (i), added in 1969, states: “When pitchers are changed during an inning, the relief pitcher shall not have the benefit of previous chances for outs not accepted in determining earned runs.”

This creates the possibility of runs charged as earned to a pitcher but not to his team, a unique instance of a counting stat for which the team total may not equal the total of all players.

For example, in the Yankees-Pirates game on April 22, with two outs in the top of the eighth inning, Jacoby Ellsbury reached third base on an error by Andrew McCutchen. Antonio Bastardo relieved Felipe Rivero. Bastardo allowed Ellsbury to score on a wild pitch before allowing back-to-back doubles to Aaron Hicks and Chase Headley. Ellsbury’s and Hicks’ runs were unearned for the Pirates (since they occurred after the third out should have been made), but Hicks’ run was earned for Bastardo due to Rule 9.16(i). The Pirates as a team allowed six earned runs in that game. Pirates pitchers allowed seven.

Last season, 17 of the 30 teams had earned run discrepancies (team total not equal to the sum of its pitchers). How common is that, and what are the typical discrepancies?

Since 1969, there have been 15 teams that allowed at least eight fewer earned runs than those allowed by the sum of their pitchers. Had rule 9.16(i) not been enacted, the earned runs would have been removed from the ledger of the individual relievers rather than added to the team totals. So the rule hasn’t improved team ERAs, it’s raised those of a few relievers. Anyway, here are the 15 teams:

So there are a few factors that underlie Rule 9.16(i). First, it’s driven by errors, which lead to unearned runs that are charged to teams but not to relievers. Here’s a chart showing errors per team (assuming a full 162-game season per team) since Rule 9.16(i) was established in 1969: 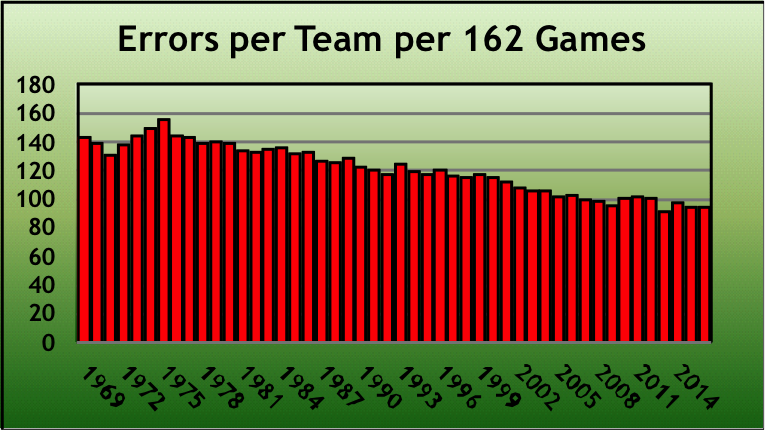 I considered adding a trendline, but I didn’t need to; you can see what’s going on. Errors, excluding blips in expansion years, are generally down. Major-league fielders are getting better and better, resulting in fewer unearned runs, and therefore fewer discrepancies between teams’ earned runs allowed and those charged to its relievers via Rule 9.16(i).

Another factor is reliever usage. In order for Rule 9.16(i) to kick in, a reliever has to come into the game. And as you know, there are a lot more relievers in contemporary baseball: 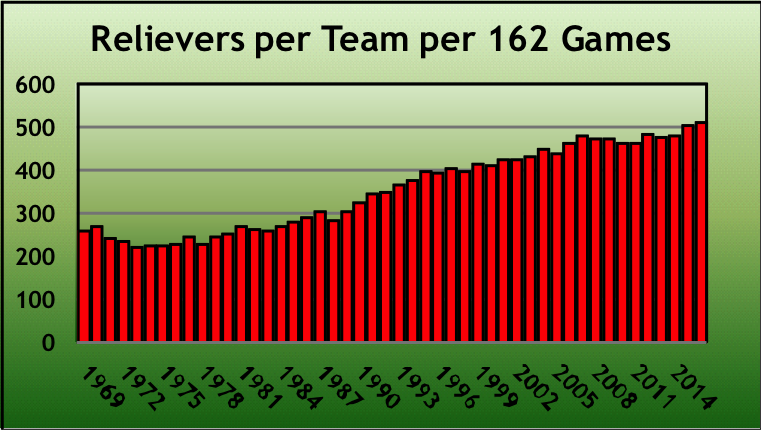 But those relievers need to come into the game in the middle of an inning for Rule 9.16(i) to be triggered. With relievers increasingly held to one-inning relief roles, this is happening less frequently. This chart shows the percentage of relief appearances that last exactly one inning. 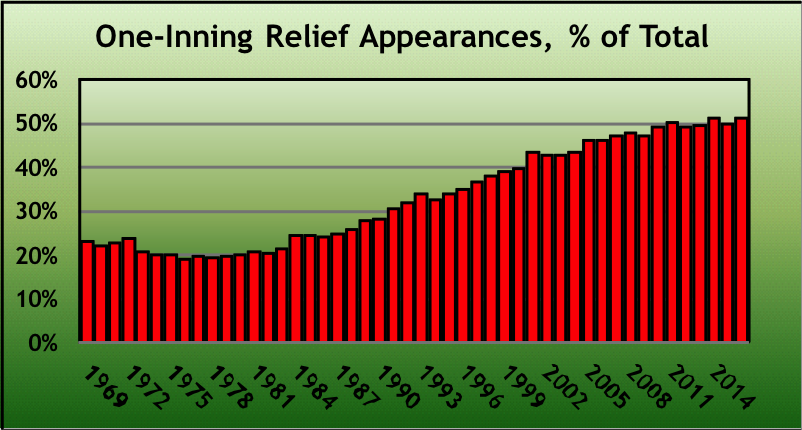 Yes, I know. A one-inning relief appearance doesn’t necessarily mean that the pitcher didn’t appear mid-inning. A reliever who comes in with one out in the sixth and leaves with one out in the seventh pitched one inning. But one-inning relief appearances are a decent enough proxy. And, as Russell A. Carleton pointed out earlier this month, bringing in a reliever at the top of an inning to pitch exactly one inning makes strategic sense.

What’s been the trend since Rule 9.16(i) was enacted, given the intersection of more relief pitchers, more one-inning relief appearances, and fewer errors? This graph shows the number of earned runs charged to relievers rather than teams, per season, since 1969. To reflect expansion and strike-shortened years, I’ve normalized the data for a 162-game, 30-team season. (For the mathematically inclined, that means I multiplied the Rule 9.16(i) run discrepancy by 4,860, i.e. 30 x 162, and divided by the number of games played that season.)

Here’s what I got: 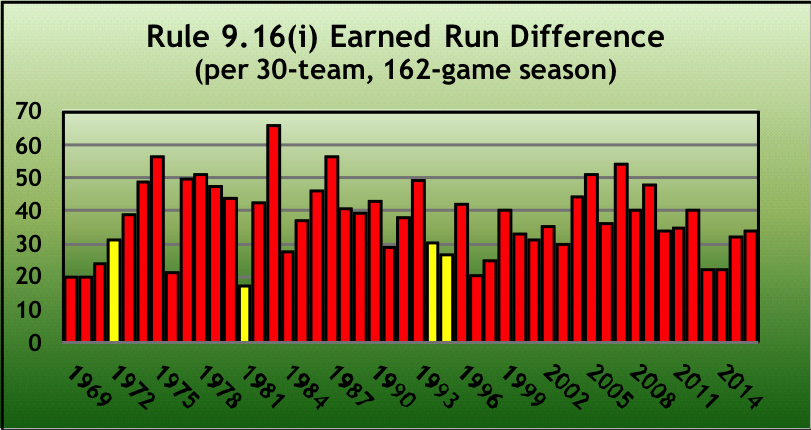 That’s a pretty noisy graph. The high-water mark was 1983, when relievers were charged with 57 more runs than their teams (adjusted to 66). The fewest were 10 in the strike-shortened 1981 season (adjusted to 17).

But there’s a pattern here, and it becomes more obvious in this graph, which excludes strike-shortened years (colored yellow in the graph above) and includes a four-year moving average (the black line): 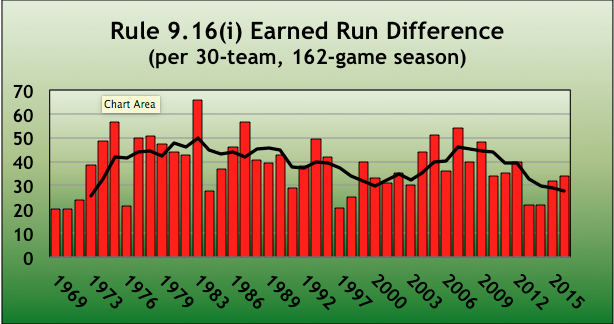 You can describe the history of Rule 9.16(i) just from looking at the trendline. The rule was adopted in 1969, and the number of relievers charged with earned runs that their teams didn’t incur grew gradually as reliever usage increased. It plateaued for a while, moving up or down in some years, but has been in retreat in recent seasons as errors have decreased and relievers have had fewer mid-inning appearances.

So the rise and fall of Rule 9.16(i) traces two trends in baseball. It grew as reliever usage increased, and it’s declined as errors have become more infrequent and relievers have come in to pitch only a full inning. Even obscure scoring rules can’t evade the game’s larger trends.

Thanks to MLB’s Official Baseball Historian John Thorn for providing the history of Rule 9.16(i).