In Defense of the Dinger Machine

Ballparks, generally, are serious places. (This despite all of the decidedly unserious activity that happens inside them.) They are monuments to the scope of baseball, the space it takes up—physically, culturally, financially. Their structural differences are not simple quirks but instead foundational pieces of the sport’s identity. They are built to carry the weight of baseball’s character. They’re green cathedrals, cast not just as places of worship but also quasi-spiritual icons in and of themselves. Perhaps most telling, there is no virtue that is prized so much here as age. The most precious thing a ballpark can be is old—if not actually old, then new enough to show off the most up-to-date and luxurious spin on the current ideal of “old.”

This, then, is why the Marlins home run sculpture is perfect: because it is the opposite of all of this. It is deliberately undignified. It is bright and maybe a little gauche and in poor taste, if you allow taste to be determined by those self-appointed judges of the subject who believe that something so flimsily arbitrary as “in poor taste” is a compelling descriptor of anything. All this means that it fits its stated purpose exactly. The sculpture, welcoming home runs with its flashing lights and whirring gizmos, exists to celebrate. And celebration—or, at least, good celebration—isn’t dignified. There is nothing serious or distinguished or mannerly about being so struck by joy, if only for a moment, that you cannot help but to feel it viscerally and express it physically. A home run is not such a serious thing, and screaming and jumping and high-fiving the stranger behind you are not serious acts! No ballpark wants its home runs to invoke the polite cheer of a mildly pleased crowd. The goal is only ever the sort of celebration that feels Technicolor and brilliantly loud and overfull, and the Marlins’ sculpture is all of that if nothing else. It’s aggressively ugly, maybe, but cheerfully so. It’s tacky and extravagant and passionately too much, which means that it’s just as indulgent as any good celebration should be.

This past week, when Miami-Dade County issued a statement to clarify that the sculpture is a work of public art that cannot be moved by the team’s new owners, they noted that it was “designed specifically for this project and location.” This is pretty self-evident; it’s hard to imagine another county-constructed building that would have use for a set of gaudy layered metal discs that stand 73 feet tall, outfitted with blinking lights and fake flying fish. But there’s something to that idea—that this sculpture, all delightfully garish and excessive, is the specific image of celebration you want in left field.

It Pays to Enrich Your Word Power

I wasn’t a big baseball card kid. I have a box of mostly Topps cards, because I got the Topps magazine, and brand impressions are very strong when you’re eight. But for some reason I also have a small clutch of Score Select cards from the early ‘90s, featuring names you would keep, like Jose Canseco and Moises Alou and Ozzie Guillen, and also names you maybe wouldn’t keep as much, like Geronimo Peña and Charles Nagy. Looking them over, the only reason I can determine that these would have survived the various purges of my baseball memorabilia over the years is the same reason I nabbed my dad’s copies of Reader’s Digest over the years; from an early age, I’ve known it Pays to Enrich Your Word Power, and the Score Select cards, instead of just having a throwaway biographical note at the bottom, featured a beautifully-written, compact piece of text that described the player not in stats, which never jumped off the page for me, but served as tiny scouting capsules, lovingly written. From the Canseco card I learned the word “prodigious,” and that for all his natural ability, teammates describe Jose as a hard worker. Before the age of digital cable and hundreds of channels, these cards helped me learn about players I wouldn’t have known well otherwise and pick out new favorites. Ozzie Guillen was “acrobatic and agile,” with a “bubbly personality.”

But there was also a definitive voice to the brief bios, like the snarkily-written capsule for Charles Nagy: 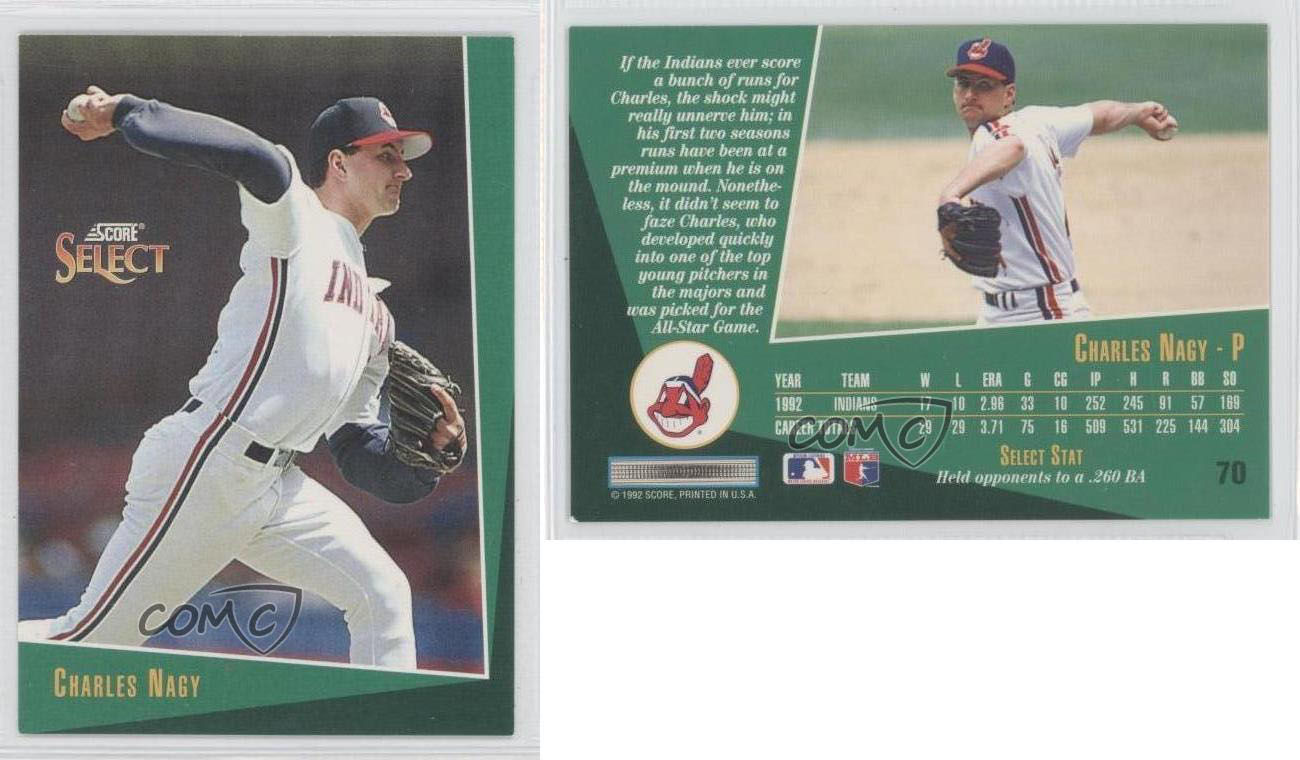 “If the Indians ever score a bunch of runs for Charles, the shock might really unnerve him; in his first two seasons, runs have been at a premium when he is on the mound.”

These cards were written with the wink-and-nod of real baseball insiders, sprinkled liberally with quotes from managers and teammates, and reading them made me feel a little smarter, a little more like I could get my hands around baseball, something so much bigger and older and smarter than me. How else would I know that Geronimo Peña was the “heir apparent” at second base in St. Louis with a “marvelous chance to supplant” incumbent Jose Oquendo? (I kept a running list of all the words I didn’t know on a piece of notebook paper.) That’s the thing about good writing: it offers both aesthetic pleasure and comfort, that feeling of making the vast, unknowable world slightly more knowable. “Never fear, Geronimo, who has a great bat and great speed, will soon get his licks.” I did not know who Geronimo Peña was when I was 10 years old, but I nodded to myself and tucked the card into the pencil box where I kept them, secure in the knowledge that he soon would.

You need to be logged in to comment. Login or Subscribe
aquavator44
Count me among the fans of Red Grooms' homer contraption in Miami. It's weird and idiosyncratic in a way not much in baseball is. Off the top of my head, the only home run celebrations that even come close are the Big Apple at Citi Field and Bernie the Brewer in Milwaukee.
Reply to aquavator44
SkeedTom
If it was original I would agree, but the whole thing has already been done better before with the Big Apple at Citi as you mention above. IMO this is an imitation, like the Terrible Towel in Pittsburgh. (Miami started the flag waving with the "Horrible Hanky" in 1972. Then an often loaded, Myron Cope copied that idea and created the "Terrible Towel" gimmick.) Many Pittsburgh fans still don't know this to this very day that the towel was a knockoff from another city.
Reply to SkeedTom