One of the things that changes when you get past the age of 28 is that you start worrying about how you’re going to feel tomorrow. Your priorities shift on some level to maximizing pain-avoidance. At some point much earlier than you’re comfortable with, you realize you might just have to live with things. I have a bad back. My knees, man. I’ve got this… ache. New acquaintances ask you what happened, and you realize the stories have gotten worse, too. I was on a short hike. I was going down stairs. I rolled over in bed. I had three beers. You’re still young, but you’re also careful now. You aren’t afraid of feeling bad in the moment. You’re afraid of feeling a little worse in every other moment forever.

Kids aren’t careful. Kids are maniacs. Kids dash into the fray without looking, then revel in injury. Dude, check out this scar! Whoaaaaa. Absent years of experiences, they are almost eager to marked by the few moments they have had. Being afraid of pain has not yet overridden the joy of being unburdened. That’s why kids do this:

You hear the pop off the aluminum bat and then over the wall center fielder Jack Regenye goes. We over-28-year-old types would define this moment of the Junior League World Series by the falling. The upended, over-the-fence-ness. The potential strain of the neck, the sprain of a wrist, the difficulty in getting up. But I bet Jack, to the extent he was self-aware in the moment at all, focused on the bit of flying followed by the elation of displaying that much cool in public. Jack doesn’t fear pain. Jack is great. 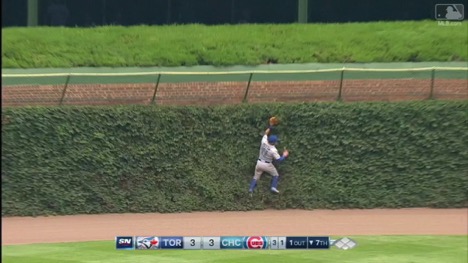 We love these moments because we know that Kevin Pillar is in a little bit of pain, which means he is a little like us. Pillar is a believable proxy for us, an avatar. We love the thrill of the abandonment of fear, and we love not feeling it as we shift in our chairs at work the next day. We aren’t Jack, but we aren’t quite Kevin either. It’s all the fun, and we don’t have to drink water before bed.

Saturday was supposed to be merely the nuptials of beloved Baseball Prospectus Minor League Editor Craig Goldstein, but due to a misprint, it became something more.

I wish this was a baseball twitter joke and not an earnest mistake, but no pic.twitter.com/GVmaxLwFqP

Previously we knew Craig as merely a sharp-eyed editor, a charming writer, a devoted friend and worker, and overly argumentative guy online. But with the substitution of the letter ‘G,’ he became something more: a unicorn, an iconoclast, a singular absurd figure befitting of these dystopian times. Graig. Surely, the only Graig most of us have ever known, and now, someone none of us will forget.

Baseball, flush with cash but also with troubling demographic trends, yearns for such a transformative element, to vault it back into the hearts of every child in America. A fading pastime glances to the letter G for answers.

After years of racking our brains for why perhaps one of the greatest players in the history of the sport has not become the globally recognized superstar his talents deserve, we have an answer. Mike Trout is a boringly efficient, omnipotent golem.

Mike Grout is the hero of tile, marble and terrazzo workers, and everyone who lays grout for a living everywhere. His supremacy will be a rallying emblem of the strength of organized, skilled labor far and wide. Fevered cries of “Solidarity!” will accompany celebrations of every one of his mighty drives to the seats.

It’s a good thing Disney doesn’t own the team anymore because, oh man, they would not be cool with this.

For most outside of the Kansas City market, the experience of the 2014-15 Royals reign of terror was a deeply frustrating experience. Destruction came in the form of wave of doinked singles from a contact-oriented offense, while rockets hit off their mediocre starting rotation were absorbed by a world-consuming outfield defense.

Thankfully, the world will not allow this nightmarish pass down the halls of memory, because it will be immortalized forever in a series of noxious ads pointing out that the Royals star center fielder has the same name as a moderately-priced Proctor & Gamble laundry detergent brand.

Lorenzo Cain would eventually be reduced to old-timers’ days and autographs signings.

Lorenzo Gain will be on our televisions, personally washing his own uniform in inferior detergent, for some reason, until the seas boil.

Everyone is sick and tired of one of the best and most fearsome young sluggers in the sport having a name that conjures the intimidating aura of one of the most central positions of authority in our brutal, carceral state.

Everyone longs for a slugger with a name that sounds like it’s something that builds up on your shower tiles over time without adequate cleaning:

“Much as his namesake gathers in the absence of CLR, so has Gudge piled up RBIs,” writes Roger Angell…

Most importantly, he would trigger a bitter rivalry with the terrazzo worker bloc that clings to Grout’s every move, exactly the sort of heated dispute that baseball has lacked.

CHARLOTTE, N.C.—Local supermarket chain Herbies, which operates 28 grocery stores in the Mid-South Atlantic region, has turned to an unusual source for increasing company productivity. Junior Executive Tyler Brisbane, a new recruit from the University of North Carolina business program, doesn’t wear a baseball cap to work, but he does use baseball to get some ideas.

“I’m a pretty big Braves fan,” Brisbane said in an interview yesterday. “I watched the MLB Network every day before my networking parties. I usually like Intentional Talk, but I saw this segment on a thing called Statcast and it kind of opened my eyes.”

Statcast, a brand of compiled statistics generated through the use of video tracking equipment, offers fans a new way of understanding baseball in ways never before dreamed. And, for Brisbane, the same is true of profit.

“They have a statistic called Sprint Speed. It tells you how fast the runner can run, of course. But on Twitter I read some people complaining about it, that it didn’t measure acceleration, or consistency, or a bunch of other stuff. Well,” Brisbane added, “it got me thinking. We usually measure our checkers based on the number of transactions they complete in a given time frame. But some checkers are faster than others, and there’s a potential for increasing capacity. I thought: why not track the top speed for each cashier, and then measure [others] on each hour for how close they come to matching it?”

The Herbies in Asheville, N.C. where the project is being tested, quotes a 10 percent increase in cashier productivity, though there have also been complaints.

“I had one good day once,” checker Tasha Kendrick admitted. “Had a bunch of crap I didn’t want to think about, so I just worked through it. Turned out to be the worst day of my life.”

Brisbane says that while he understands their concerns, Statcast actually will be a boon to employees, because it gives them statistical proof of their value to the company.

But either way, Brisbane is just getting started.

“We’re looking into lots of applications,” he said. “One through five-star customer service resolutions, based on difficulty. I’m excited about some of the breakthroughs we’re making on route efficiency for the night crew.”

The company expects to expand its Statcast program in time for the holiday season.