Three Conversations That Might Have Gotten Kris Bryant Ejected

I will admit to being obsessed with ejections in major league baseball. The determination of what the breaking point is in discourse, especially among the salty, weathered men who play and monitor a sport full of screaming and yelling is a line we need sketched out. In that vein, famously mild-mannered Kris Bryant was ejected for the first time in his major league career last Tuesday by Lance Barksdale.

Since this incident, all discussion has centered around what Bryant could have possibly said to spark a disinvite from the proceedings. Profanity has been ruled out, and Joe Maddon sketched the parameters as “awkwardly benign,” so we can conclude that Bryant said something free of cursing, generally acceptable in principle, yet unforgivable in context.

KRIS BRYANT: You like Game of Thrones?
LANCE BARKSDALE: Hell yeah
KB: The only good imperialist is a dead imperialist
LB: Well, sure b–
KB: WHICH IS WHY I’M ROOTING FOR THE NIGHT KING
LB: Please stop

KB: Like knock knock jokes?
LB: As much as anyone but seems like an odd t–
KB: Knock knock
LB:
KB: Knock knock
LB: Who’s there
KB: The myriad of economic and social repercussions put in motion by the terms of the treaty of Versailles
LB: Well, I’m not answering this

Choose Your Own Tim McCarver Adventure

Can you, Tim McCarver, make your way to the field to announce the game?

You are Cardinals announcer and legendary baseball entity Tim McCarver. You step out the door of your New York City hotel with nearly 60 years of professional baseball experience rattling around in your head. As you make your way to Citi Field for a game against the Mets, an elderly woman draped in decorative scarves steps in front of you brandishing an ancient medallion.

“Hello young man, do you wish to commune with the demons of the old city?”

“Ahh, a baseball man,” the old woman responds, “just as I suspected. Follow me, quickly now.” She ushers you down a nearby alley and hoists you into a dumpster – but it’s no dumpster at all! It’s a secret passage leading into the sewers.

What is your next move?

As you wander further forward into the darkness of the sewers, you come across a massive rat with the head of a pigeon. You stop dead in your tracks as the pigeon-rat’s booming voice declares “I am Simurpius, ruler of the dampness, keeper of the darkness! He who encroaches upon my kingdom must correctly answer my 40 riddles or be eaten alive!”

“No one has ever dared to so brazenly ignore the wishes of Simurpius!” Cries the rat-pigeon. “You must be a powerful spirit indeed. Go on, you may consult the Cube.”

Simurpius steps aside to reveal a floating cube that glows in the darkness. The Cube shows all things – the entire spectrum of human emotion – all at once. No human has ever set eyes on so much truth.

The Cube is impressed. The Cube hums the following rhyme: “Round bat, round ball, for a hundred years more, McCarver will be on the call.” The Cube then grows, it grows so big that it engulfs you. You close your eyes. When they open, you are in the broadcast booth at Citi Field, ready for the first pitch.

Just another day at the ballpark for you, Tim McCarver.

The Greatest Two-Sport Athlete Ever

When you think of the greatest modern two-sport athletes, the mind is drawn to the mid-nineties heyday: Bo, Deion, Brian Jordan. History buffs might conjure names like Jim Thorpe and Gene Conley, while people who care about track and field might say Bob Hayes or Jackie Robinson. A majority of the current electoral college, of course, would vote for Tim Tebow. They, and almost certainly you, are all wrong.

You can judge a two-sport star by how successful he is at his lesser sport, or his greater sport, or the combination of the two. But the thing about all two-sport athletes is that for the most part, there’s a ton of overlap in the underlying talent. The speed and reflexes that made Deion Sanders elite as a cornerback made him useful as an outfielder. And of course Jackie Robinson was great at track; the dude was fast. The greatest two-sport athletes is a list less of physical skill than of opportunity: those willing (or able) to qualify. But there’s one man whose greatness rested in almost entirely separate realms. 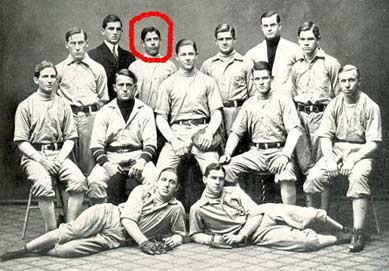 Jose Capablanca was born in Cuba in 1888, a frail yet intelligent boy. At 17 he attended Columbia University, passing its entrance exams with ease, with only one target on his mind: to join the school’s prestigious baseball club. He started on the school’s freshman team, taking over as their starting shortstop. We don’t know how well he did–the box scores, sadly, did not survive–and we can only speculate where his career would have taken him, because he soon dropped out of the university he had worked so hard to attend.

Capablanca, as it turned out, was the Michael Jordan of chess: surpassed, perhaps, in the modern game, but unrivaled in his time, one of the greatest to have ever lived.

At twenty he trounced US Champion Frank Marshall, 8-1, with fourteen draws. He traveled to Europe, dominated tournaments, until the current World Champion, Edmund Lasker, explicitly resigned to hand Capablanca the title. (After Jose raised some prize money, Lasker agreed to have a match after all, but quit halfway through with a large deficit and complaining of ill health.) Capablanca went eight straight years without losing a single tournament game, unthinkable and basically impossible by modern standards. 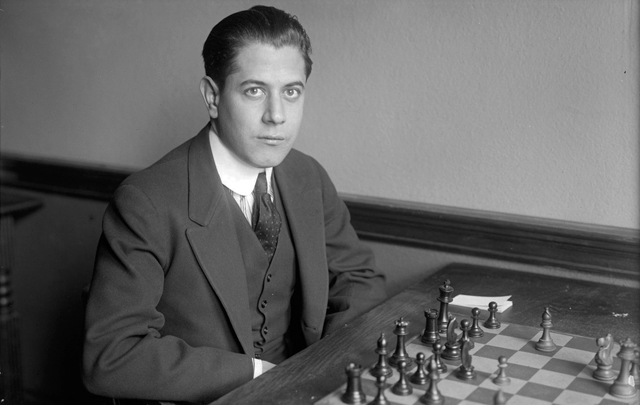 After his retirement, however, he was interviewed in 1935 by a reporter for Collier’s magazine. Capablanca was an elusive interview, but he was finally won over–by the promise that the reporter might acquaint him with Mickey Cochrane.

You need to be logged in to comment. Login or Subscribe
antonsirius
Capablanca was the man, it's true, but Ted Williams is still in the IGFA Hall of Fame for his fly fishing so every other two-sport athlete is competing for second place.
Reply to antonsirius
touchstoneQu
Mookie Betts: hold my beer.
Reply to touchstoneQu
Jadam2122
Greatest two sport Athlete: Jim Brown, !st Ballot hall of fame lacrosse and Honorary Iroquois. All time dominant player maybe best ever in two sports.

Wilt the Stilt gets honorable mention for his volleyball dominance.
Reply to Jadam2122
BeplerP
I will go along with Jim Brown, but also want some love for Dave Debusschere- CWS and New York Knicks (when the latter was a real team, not the punch line to a lot of bad jokes!)
Reply to BeplerP
jfranco77
Dick Groat, won an NL MVP award and a batting title, was a 2x All-American basketball player, played a year in the NBA, and I read somewhere that he is the only player in both the college baseball and college basketball halls of fame.
Reply to jfranco77