Perhaps it’s too soon to call 2017 the best season of Nolan Arenado’s career, but it’s not unreasonable to think that Wednesday’s 18-run beatdown of the Padres was among his best single-game performances.

Arenado, who entered Wednesday batting .301/.349/.556 with 18 home runs and 3.4 WARP (second on the team to hot-hitting outfielder Charlie Blackmon), tied a career-high seven RBIs against the Padres. He helped the Rockies to a four-run lead in the first two innings, scoring Blackmon twice on RBI singles as the Padres were held hitless by Jon Gray. After Gray pitched another scoreless frame in the third, followed by another two runs from the Rockies in the bottom of the inning, Arenado returned for his first smash of the afternoon:

The home run, his 19th of the year, capped a six-run drive by the Rockies in the fourth and effectively booted Clayton Richard from his 10th loss of the season. At 100 pitches through 3 2/3 innings, Richard's strike zone plot began to look something like the grisly refuse of a crime scene before Kevin Quackenbush came in to relieve him. 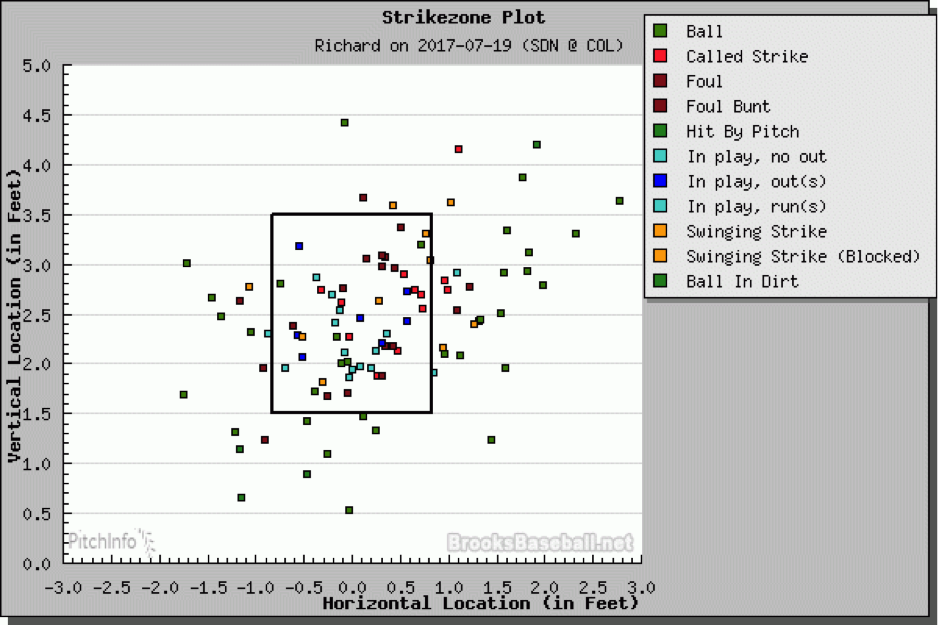 Quackenbush wasn’t immune to the effects of Coors Field either, and surrendered another solo shot to Arenado in the fifth:

The game wasn’t completely without merit for the Padres, however. They rebounded in the sixth with a four-run effort, finally catching a break against Gray with Jabari Blash’s RBI hit and a first-pitch, three-run homer from Cory Spangenberg. An impressive showing on any other day, four runs weren’t enough to close the nine-run gap against Colorado, which exploited the angles of their home park for another four runs in the bottom of the inning.

That included Arenado’s third home run of the day and third in as many innings, mirroring Spangenberg’s efforts with a first-pitch, three-run homer of his own:

The blast set a new home run record for Arenado, making him the 11th player in franchise history with a three-homer performance and the first to do so since Charlie Blackmon collected three dingers against the Phillies last August.

As for the team’s 18-run spread, it was the most they’d scored in a single game in over five years, when they organized an 18-9 rout of the Mets during the spring of 2012. Despite their double-digit drubbing, the Rockies still have 10.5 games to make up in the NL West and need at least one more win to move ahead of the Diamondbacks in the Wild Card seeding.

Aaron Judge may have obliterated the competition during this year’s Home Run Derby, but don’t think that Giancarlo Stanton’s first-round defeat means he’s been put out to pasture. Stanton crushed Nick Pivetta’s 3-1 curveball a devastating 437 feet to center field on Wednesday, tying Judge’s MLB-leading mark with his 30th dinger of the season:

Of course, it’s not always about the home run totals. Sometimes, just getting the ball past the infield is good enough. Mike Montgomery launched his first career home run to put the Cubs on the board in the fifth inning, taking R.A. Dickey deep with a blast to right field:

Montgomery wasn’t quite so generous on the mound, inducing an inning-ending ground out from Dickey in the bottom of the fifth:

He finished the afternoon with six solid innings of one-run ball, exercising 84 pitches to help preserve the Cubs’ six-run lead and their 49th win of the season.

On Monday, the Astros bid a final farewell to Carlos Beltran’s glove. It was laid to rest in its favorite spot, the patch of grass just to the left of the center field hedge, with some tasteful (and not-so-tasteful) remarks by lead sermonizer Brian McCann.

Two days later—miracle of miracles!—the ghost of the glove was resurrected:

After a pair of impressive catches in the first inning, Beltran’s glove came up short against Jean Segura in the fourth inning and set up Ben Gamel for the go-ahead home run:

The Astros dropped the series finale after another shutdown performance by James Paxton, bringing their division lead to a modest 15.5 games in the AL West.

Everything about Brian Dozier’s fifth-inning catch reads like a one-man ballet, from the artistic choice of camera angle …

… to the moment of suspension above the basepath …

… to his unexpectedly wild tumble to complete the play.

The Yankees are hanging onto that second Wild Card by their fingertips, and will need Luis Severino (2.84 DRA, 78 cFIP) to extend his hot streak when the team rolls into Seattle for a four-game set on Thursday. Severino posted back-to-back quality starts over his last two outings, but will have to go through Felix Hernandez (3.35 DRA, 91 cFIP) to give the Yankees a shot at their first series win since mid-June (10:10 ET).

In the National League, Madison Bumgarner (3.31 DRA, 89 cFIP) will make his long-awaited appearance at AT&T Park, where he hasn’t pitched since April. The Giants’ ace has yet to record his first win of the year after missing three months with a left shoulder sprain, but posted a respectable three-run, five-strikeout performance during his second-half debut last Saturday (10:15 ET).