These Seeds I’ve Shored Against My Ruin

Why then Ile walk him. Francisco’s mad againe.

On June 5, as the Pittsburgh Pirates visited the Philadelphia Phillies, an instructive scene unfolded. In the bottom of the second inning, with the Pirates losing by two runs, Gerrit Cole struck out Daniel Nava—except that home plate umpire Larry Vanover called strike three ball four, and Nava joined Odubel Herrera on the base paths. 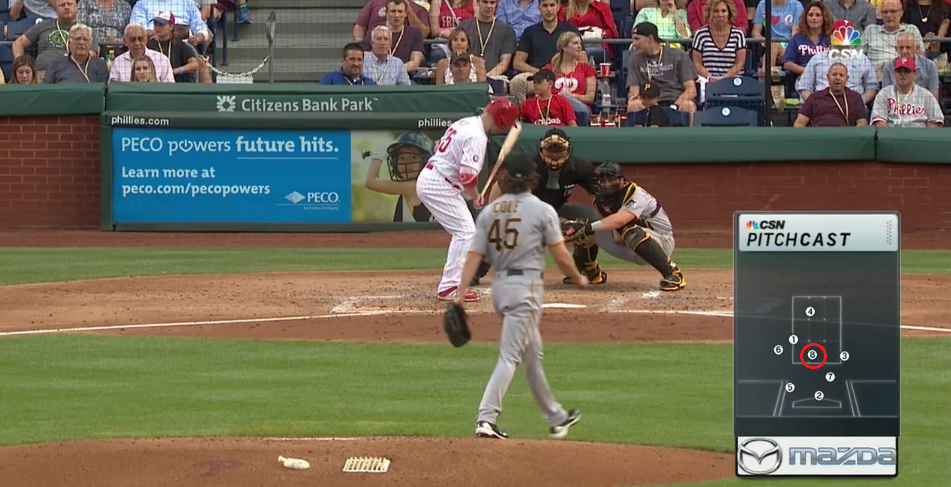 Cole, exhibiting a clear sense of attachment to the thrown pitch and to the place that it crossed the plate, was visibly unhappy. Pirates catcher Francisco Cervelli took a walk out to the mound to attempt to calm down his battery mate, but he, too, had as clear a picture of the pitch in his mind, no matter that the ball had already been thrown back. His mitt was empty but his emotional memory was full. Soon, the conversation expanded, until Pirates pitching coach Ray Searage intervened, ostensibly at first to discuss situational strategy and then to ensure that his catcher’s participation in the game was not, also, a temporary matter. 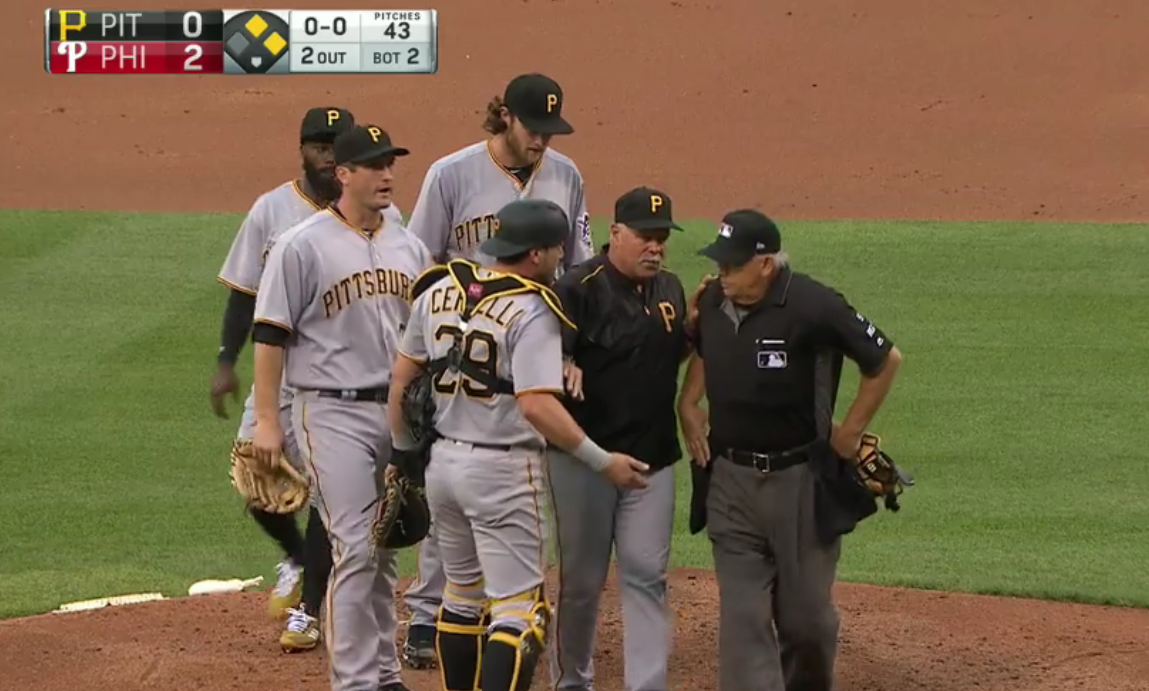 Before Freddy Galvis could step to the plate, Pirates manager Clint Hurdle came forward to have a word with Vanover, too, bearing with him a handful of sunflower seeds. Hurdle didn't offer any to Vanover, nor did he throw them, nor did he put them into his mouth and thus enlarge his flushed cheeks. Instead, he kept the seed-holding hand cupped before him, pinching up one seed at a time. While he kept conference with the umpire, one kernel's shell split. Hurdle took up another. He put none of the shelled seeds into his mouth, only let them fall back into his waiting palm, all the while conversing with the arbiter of his pitcher's work. 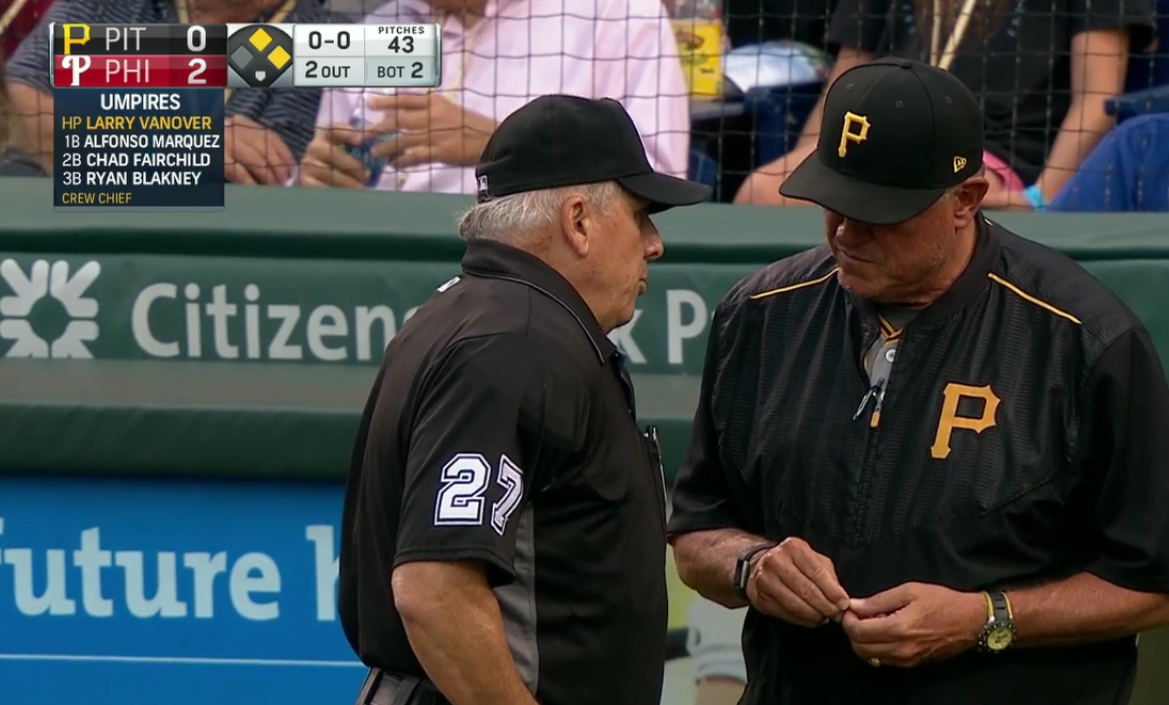 For nearly twenty-five seconds, Clint Hurdle calmly shelled sunflower seeds near home plate. No one was ejected. When, a few seconds later, two more borderline pitches were called balls, the camera cut to Hurdle in the dugout, his teeth nimbly working on more seeds still behind the screen of a closed mouth—a mouth that remained closed, save to spit away the spent hulls. Freddy Galvis clocked a long out on the warning track. The contentious inning ended with Francisco Cervelli having one more word with Vanover, his catcher’s mitt framing the umpire’s ribs. Clint Hurdle sat upon the bench shelling, with the concrete wall behind him, the diamond set again in order. 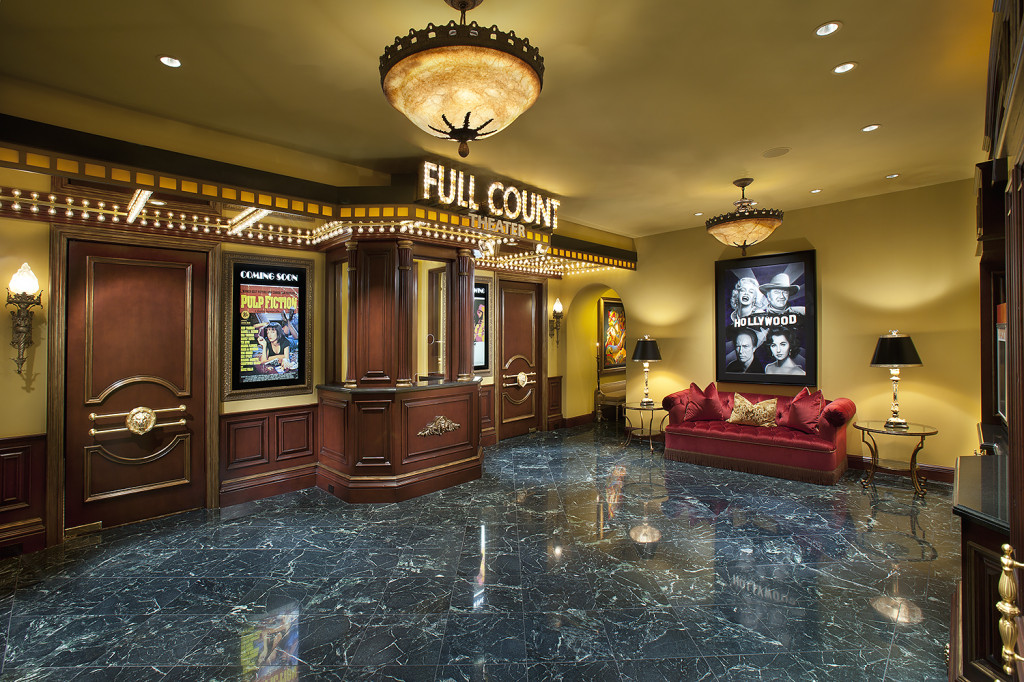 About a year ago, I came across a real estate listing for Randy Johnson’s Paradise Valley mansion. It’s 25,000 square feet, and is currently for sale for $19.995 million, a modest reduction from the initial asking price. In the year since, I’ve probably thought about that listing once a week. Johnson struck out 4,875 batters over the course of a 22-year career, more than any other left-handed pitcher in MLB history and second only to all-time leader Nolan Ryan. He won Cy Young awards, and pitched a perfect game. And he has what appears to be a fully functional movie theater in his home called “Full Count Theater.”

That name raises a number of questions. First, and perhaps most obviously, why name the theater at all? It’s a home theater. It’s in his home. It doesn’t have listings. We give places names to distinguish one bit of grass from another. Does Randy have another, undisclosed movie theater on his estate? Does he mix them up? What is the other one called? Or is the concern that he’ll say “Let’s go watch a movie!” while entertaining guests and without the benefit of a name, his guests will zoom away toward Paradise Valley, leaving him all alone. He made popcorn! I wonder if all the rooms bear a baseball phrases as a name, but this is the only one we can see. Maybe the Seventh Inning Stretch Workout Suite is adjoined by the Clean Up Hitter Laundry Room, while the front foyer is known as the On Deck Circle. And just how much of the $19.995 million is the movie theater? I bet it has nice seats. And honestly, who wants to go out, when you can just stay in.

And why Full Count? According to Baseball Reference, Johnson was in a full count in 2,105 plate appearances, or just 14% of his total plate appearances as a pro. He wasn’t a full count guy. Fans didn’t moan and say “Ol’ Full Count Randy.” I suppose Big Unit Theatre connotes films of a particular sort, and Johnson wanted to avoid working blue. But why not something that speaks to the sort of career he had? Full Count doesn’t seem to have any special film meaning. It’s not a pun. Perhaps it’s a little joke he has with himself, a constant reminder of what he was by way of an absence. Full Count? Pfft. Or maybe it indicates a darker turn; 2,105 plate appearances that ran full, in defiance of who he wanted to be. I wonder if he regrets that we’ve seen it; what if we’ve intruded on something quite private. Maybe each time he treks in to watch Treasure of the Sierra Madre, he’s reminded not of his accomplishments but of these small failures, some of which came home to score but many of which were forgotten a moment later. Maybe we struggle to let things go. Maybe that’s why he wants to sell the house. Who would want to spend movie night with that looming over them?

Or maybe his decorator was a Yankees fan, exacting a small revenge. It was that or shiplap.

The Timing of Grievances

Charlie Blackmon got ejected after striking out in the ninth inning of the Colorado Rockies’ 5-4 loss to the White Sox, after a prolonged period of addressing his grievances with Sam Holbrook’s strike zone.

He was called out on a low strike that Sox catcher Kevan Smith held up toward the bottom lip of the zone, but many speculated that Blackmon was taking the opportunity to “get into his feelings,” as the kids say, about a call from the seventh inning. 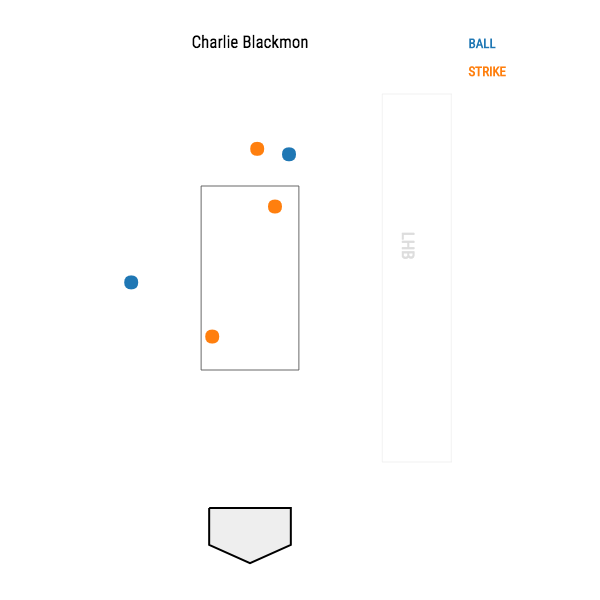 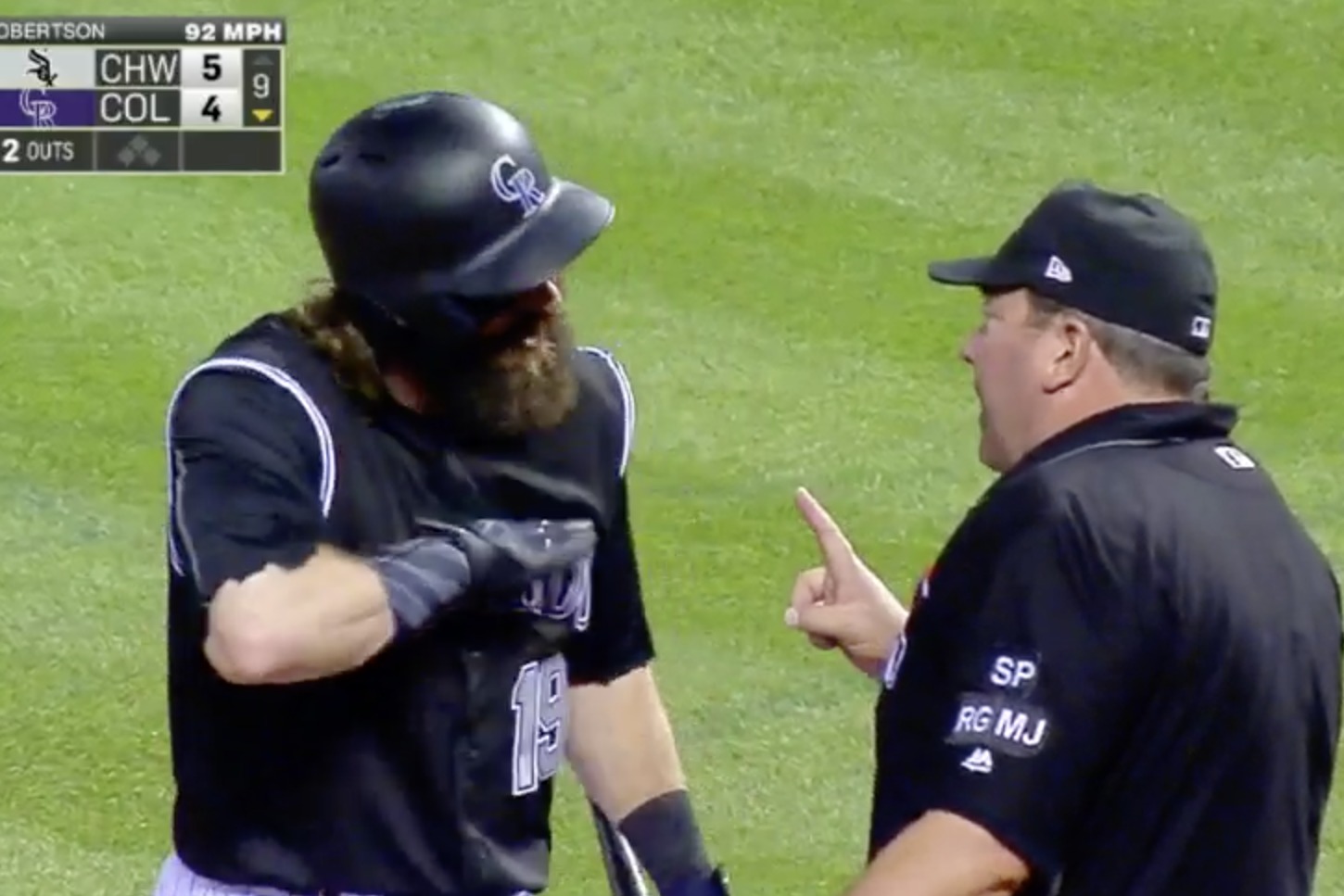 …We can only speculate as to why.

Baseball Reference and FanGraphs both put the Rockies’ win expectancy around six percent after Blackmon struck out with the bases empty, not factoring the merits of a matchup between closer David Robertson and a slumping Carlos Gonzalez.

This explosion of rage from Blackmon was thus more of a strategic release, the endpoint of a process of consolidating his grievances until the most dire outcome was already assured, like an argument about curtains during divorce mediation or 2017 debates about the 2016 Democratic Primary.

Batters have a certain obligation to stay in the game late to actually, you know, bat, but enough pitchers have ended their day by screaming at the umpires to confirm that players are consciously holding back their contempt for the incompetence of the ruling authority for the moment it will no longer hurt them professionally.

But there are limits. Every umpire is someone players will eventually see again in the season, and in the immediate, likely will be in charge of calls against their teammates for the rest of the game and series. The baseball world is just too small for there to ever be a clean getaway. If you call someone “a stupid hoser” because they didn’t see you smack a baserunner across the face with a tag, they’ll carry it with them forever.

Which show the real frontier for speaking truth to power in baseball: Hall of Fame induction speeches. While everyone remembers Frank Thomas for shouting out nearly every teammate he’s ever had, future speeches should be remembered for the clarity of their pace of play arguments, the stunning reveal of the plot to increase home runs in the sport being marred by poor iPhone video quality as well the inductee being tackled 40 seconds in, and shockingly petty rants about lineup construction. It will be a golden age.