On May 31, Jacob deGrom made a start against the Brewers in New York and lasted only four innings. He gave up seven runs on eight hits, walked five batters, struck out six, surrendered two home runs, and picked up the loss.

On June 6, deGrom made a start against the Rangers in Texas and lasted only four innings. He gave up eight runs on 10 hits, walked one batter, struck out two, surrendered two home runs, and picked up the loss.

In both starts, the Mets gave deGrom the lead, and in both starts, deGrom couldn’t hold on. He struggled with his two-seamer and batters were jumping on it. What’s also strange about those two abbreviated outings is that they followed deGrom’s strongest outing of the season up to that point; a masterpiece in Pittsburgh on May 26 in which he only allowed one run in 8 1/3 innings, with 10 strikeouts in an 8-1 win.

deGrom was looking to right the ship in a big way in front of his home crowd against the defending World Series champion Cubs on Monday night. He needed to do it. He not only won the game but he pitched a complete game and held the Cubs to one run, keeping their batters off balance all night.

The one mistake deGrom made was to Addison Russell in the seventh inning. It was a two-seamer that was belt high and over the plate that Russell took into the right field seats to end the shutout.

Other than that blip, deGrom was in complete control.

Chicago never really threatened and the Mets pulled away thanks to deGrom and also to Asdrubal Cabrera’s two-homer performance.

The key for deGrom is that he mixed his pitches. 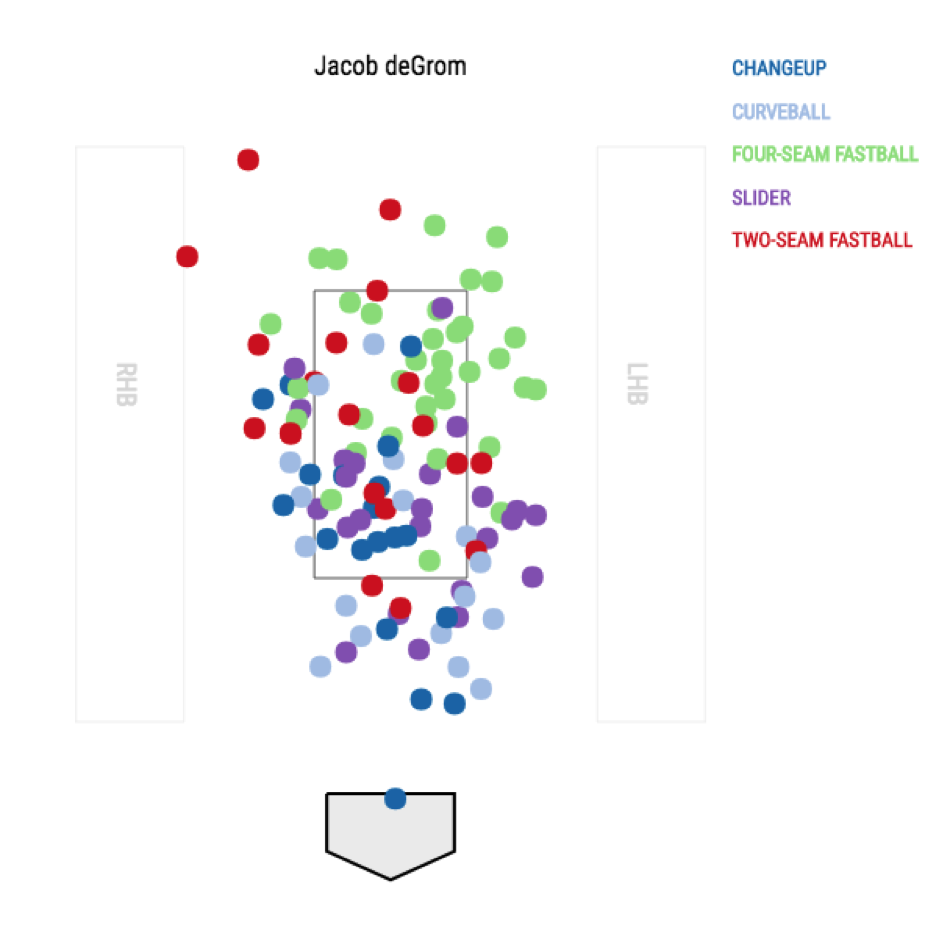 deGrom hadn’t done that as much in his previous two starts and he paid for it dearly.

On Monday night, the Cubs only managed five hits off deGrom. He also induced four double plays, 13 ground-ball outs, and six strikeouts. deGrom threw 116 pitches and struck out Willson Contreras on a 97 mph fastball to end the game.

The Braves and Nationals played a pretty crazy contest on Monday night. It featured lots of runs and lots of lead changes. It also featured an odd pitching performance from Nats starter Stephen Strasburg, who gave up six runs on seven hits—including three home runs—in five innings and struck out 10 batters. He didn’t factor into the decision. Braves starter Mike Foltynewicz also didn’t factor into the decision and also had a rough outing. He didn’t last as long as Strasburg—only 3 1/3 innings—but he gave up the same number of home runs as Strasburg, three.

Atlanta found itself down 9-8 in the top of the ninth inning, but Matt Albers was pitching and as everyone around baseball knows, Washington’s bullpen is not good. Entering Monday night their ERA was 4.91, so Atlanta was champing at the bit. Nick Markakis and Matt Adams walked, and Albers threw Tyler Flowers a fastball that was on the outside of the plate, but Flowers made solid contact and hit it out to right field to give the Braves an 11-9 lead.

Stop me if you’ve heard this before but Aaron Judge hit a monster home run. This time, he hit one in Anaheim. It was only 438 feet, but it put the Yankees ahead in the eighth inning against the Angels and it turned out to be the game-winner. The game was tied at three and Bud Norris made the mistake of throwing a 2-0 cutter that didn’t quite cut, and Judge crushed it. It was Judge’s league-leading 22nd home run of the season.

Masahiro Tanaka was the other story for the Yankees on Monday night. He’s been struggling mightily this season. Instead of starting on Sunday at home against Baltimore, he made the start on the road in Anaheim. It seemed to help. After a first-inning blemish—a solo home run to Kole Calhoun—Tanaka held the Angels to three hits and struck out eight in 6 2/3 innings. He didn’t factor into the decision, but the Yankees had to be pleased with his performance.

The Red Sox are keeping pace with the Yankees. On Monday, it took them 11 innings to beat the Phillies but they did it, and it happened on a walk-off single by old man Dustin Pedroia.

That score would remain until the bottom of the eighth, when Hanley Ramirez homered off Joaquin Benoit.

And then in the 11th, with runners on first and second, Pedroia came up to bat and on Casey Fien’s 31st pitch of the night, an 0-2 fastball, sent it into right field to score pinch-runner Deven Marrero from second base to win the game, 6-5.

Baltimore lost its fifth game in a row. They were down 6-0 to the White Sox in the second inning but made it a game and lost 10-7. Wade Miley seems to be a ball magnet this season. Here’s another example.

The game was already at hand and the Reds had virtually no chance of coming back but this play by San Diego’s Franchy Cordero was pretty cool and his name is pretty cool, and it’s the reason I picked it.

CC Sabathia is looking for his eighth win of the season on Tuesday night in Anaheim. He has been the Yankees’ stopper in his past four starts, which coincidentally have followed Masahiro Tanaka losses, but now that he will be following a Yankees win (and a Tanaka no-decision), it will be intriguing to see how the big guy responds. He will be facing off against JC Ramirez, who is looking for his seventh win of the season.

The Pirates will be looking for their second win in their series against the surprising and surging Rockies. On Tuesday, Gerrit Cole will be facing Tyler Chatwood. Chatwood, who's been a totally different pitcher on the road compared to at home, is looking to get to .500 on the year, while Cole is trying to turn his year around.

You need to be logged in to comment. Login or Subscribe
fflakes41
No love for Taillon's impressive first start back?!?
Reply to fflakes41
oldbopper
I don't know about anybody else but there is all sorts of love from this long time fan. That was definitely the best story of the day!
Reply to oldbopper