Last week I began a project: to take every major pitching statistic and look at its distribution along various percentiles, mostly to provide a feel for what a "good" or a "bad" number looks like for many of our important and unintuitive statistics. This isn’t so much a work of analysis as it is a dip in a statistical hot tub, just soaking in the numbers and getting comfortable in them.

Today, that task comes to its conclusion as we look at the other half of the world, the numbers of hitters. A grand total of 180 made the cut of 150 plate appearances, and I ranked them on almost every statistic I could think of. Some that I left out: stolen base numbers, since so many hitters haven’t even made an attempt, and since the baserunning numbers do a better job of encapsulating value. Also, RBI rates based on opportunity, because I just couldn’t force myself to care. If you care, I apologize.

(Please apply the same set of disclaimers as last week: because of the small sample size and the rarity of certain baseball events, the distribution may look a little wackier than it might over 700 plate appearances. These statistics are current as of June 5, because it seriously takes me this long to put them all together. Hitters get tracked on a lot of variables, folks.) 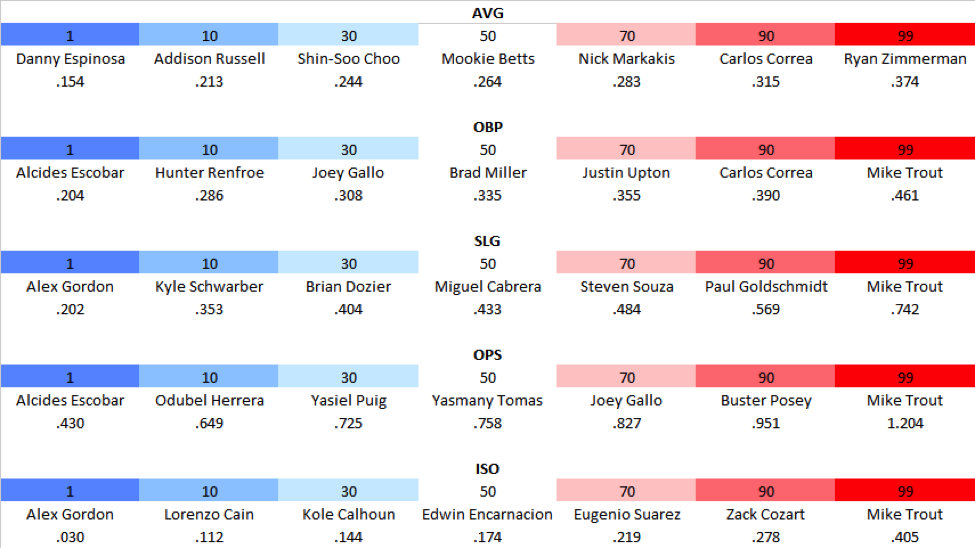 Unlike the starting pitchers, who were all unhappy in their own way, you’re going to see a lot of the same names on the left-hand column of these charts, particularly the hitting-based ones. Alex Gordon can still take a walk, but that’s the only thing separating him from Alcides Escobar among the worst hitters of 2017, and they both wear the same powder blue each day.

You will not, perhaps surprisingly, see the same name on the other end of the spectrum. As great as Mike Trout is, his excellence in production above is built on consistently great-but-not-unique peripherals across the board. You won’t see his name under the blood red anywhere else in this article, which is kind of crazy given how special a player he is.

Note: someday we’ll do a Turn Back the Clock Day at Baseball Prospectus, and analyze the game of baseball the way they would have in 1987. If we did that today, the no. 1 story wouldn’t be Trout or Zack Cozart or even Aaron Judge. It’d be Ryan Zimmerman, whose batting average is a whole 30 points ahead of second place. It’s a bit of a shame that Zimmerman is relegated to second-tier status among the big stories of 2017, because what he’s done this year is as amazing as it is unsustainable. 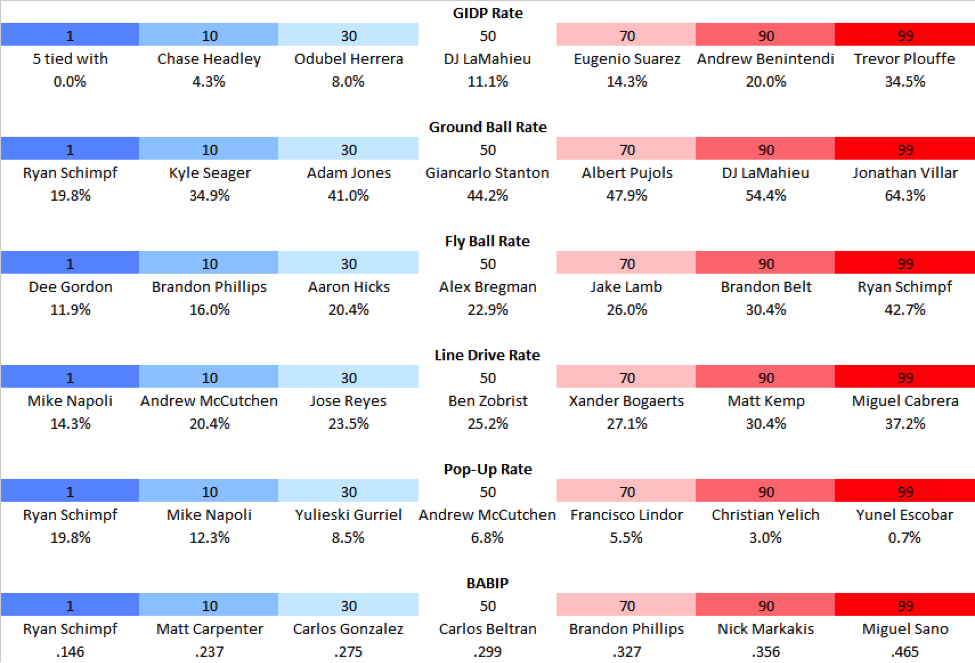 If you’re looking for runs on ignominy, Trevor Plouffe has one for you: GIDP rate leaders tend to hover in the mid-to-high 20s during non-Casey McGehee seasons. Obviously Plouffe will slow down, but the idea of any hitter making two outs a third of the time the opportunity affords makes a normal person well with pity for that franchise’s fans.

You’re all familiar with Ryan Schimpf by now, so no need to act surprised, although it is enjoyable to notice that Miguel Sano’s BABIP is a full three times greater than the pop-up prone Padre. (He’s also one of the five qualified major leaguers who hasn’t hit into a double play yet: hard to do when the runner has five seconds to get back to his base.) Meanwhile, in a bit of a down season, especially in terms of power, that line-drive rate has been keeping Miguel Cabrera afloat.

In light of the launch-angle revolution, a list of its leaderboard would hardly be a surprise, although it’s interesting to note that ranking 13th has done Andrew McCutchen few favors. Probably even less suited: Alcides Escobar, who ranks 20th. Know your role, kids. 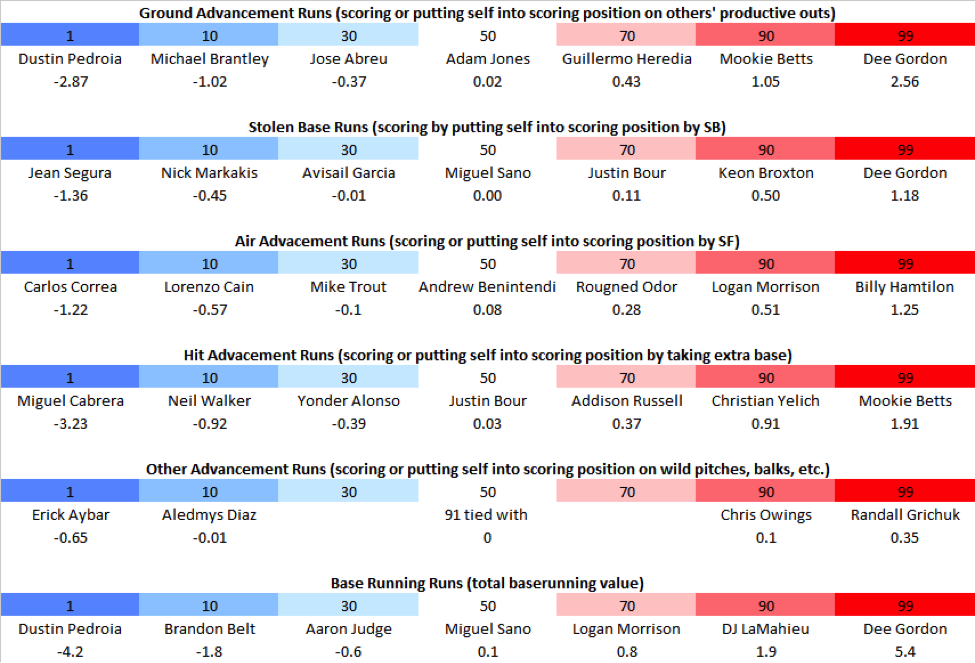 Baserunning statistics may be the most intuitive of any segment; players who look fast generally are fast, and speed, assuming Jon Lester isn’t on the mound, doesn’t slump. The elements of baserunning runs, when broken down into its different parts, are also particularly susceptible to sample issues: see Carlos Correa, who slots in right between Victor Martinez and Miguel Cabrera as the third-worst baserunner in baseball this season.

If there’s anything to note it’s in the results of Dustin Pedroia, whose days of 20 stolen bases are far in the background but whose terrible baserunning skill has snuck up on us a bit. It also reveals how the stolen base itself, already diminished from its height of fashion, is less important in a runner’s repertoire than what he accomplishes once the ball is in play. One could hypothesize that Pedroia isn’t getting much of a read on ground balls, or isn’t making his teammates’ outs very productive. 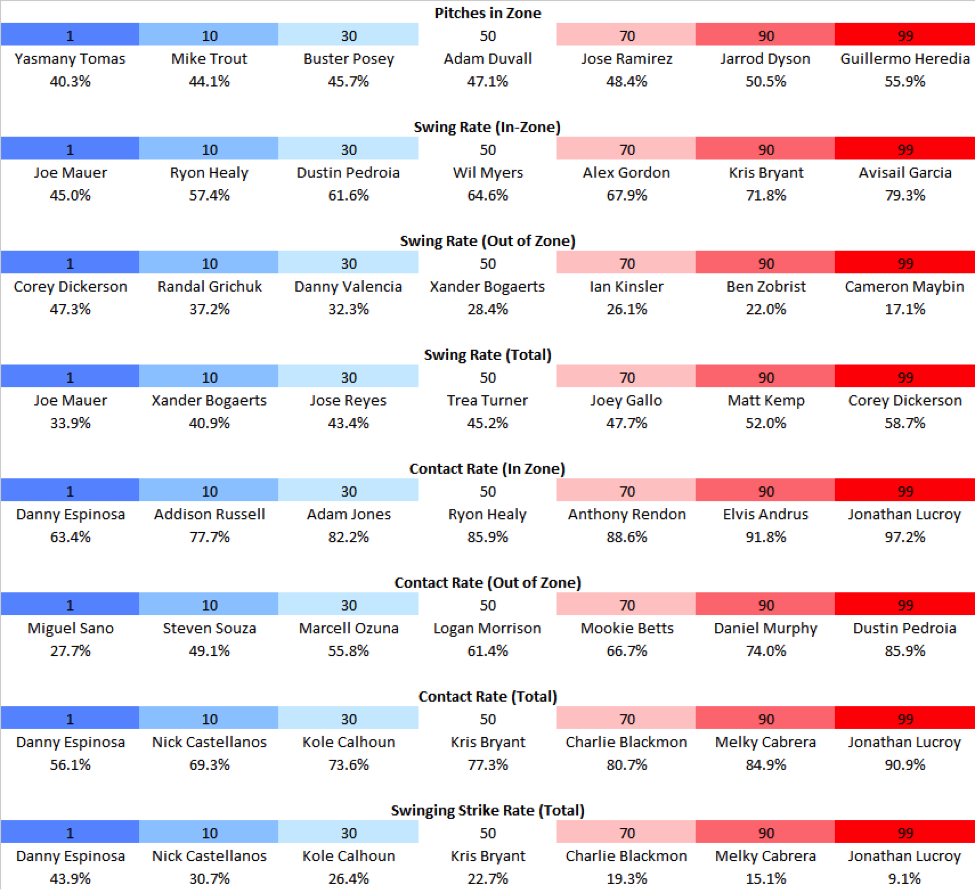 Pitches in zone is an interesting stat because it can be driven by two different forces: either a pitcher wants to throw balls, or he doesn’t want to throw strikes. That top left corner is a prime example, as Mike Trout gets pitched around regularly, while Yasmany Tomas gets dared to leave the bat on his shoulder. The other end of the spectrum isn’t as orderly, as Guillermo Heredia is turning into a fine hitter, in no way deserving of his special treatment. Charlie Blackmon and Trea Turner are also near the top.

The most interesting name might be Joe Mauer. Mauer ranks ninth in pitches in the zone, and swings at the absolute least. And yet his strikeout rate is a mere 12.6 percent. Happy to see as many pitches as he can, he’ll finally swing—and generally, hit—that two-strike pitch he’s forced to. It’s a tactic that’s working, barely, for a player with an offensive profile that doesn’t really hold up any other way. It’s pretty admirable, really.

The other thing to take away is the dramatic difference between swinging at pitches in the zone and out of the zone. Sure, the Athletics were preaching plate discipline and grinding those walks 15 years ago, but the value in a good eye hasn’t really gone away. It’s just that instead of earning free passes, it’s necessary for taking high-percentage swings, the way basketball teams have geared their offenses toward higher-efficiency shots.

Last note: imagine if Miguel Sano stopped swinging at pitches out of the zone. There’s no guarantee that it’ll ever happen, but man, it’s fun to think about. 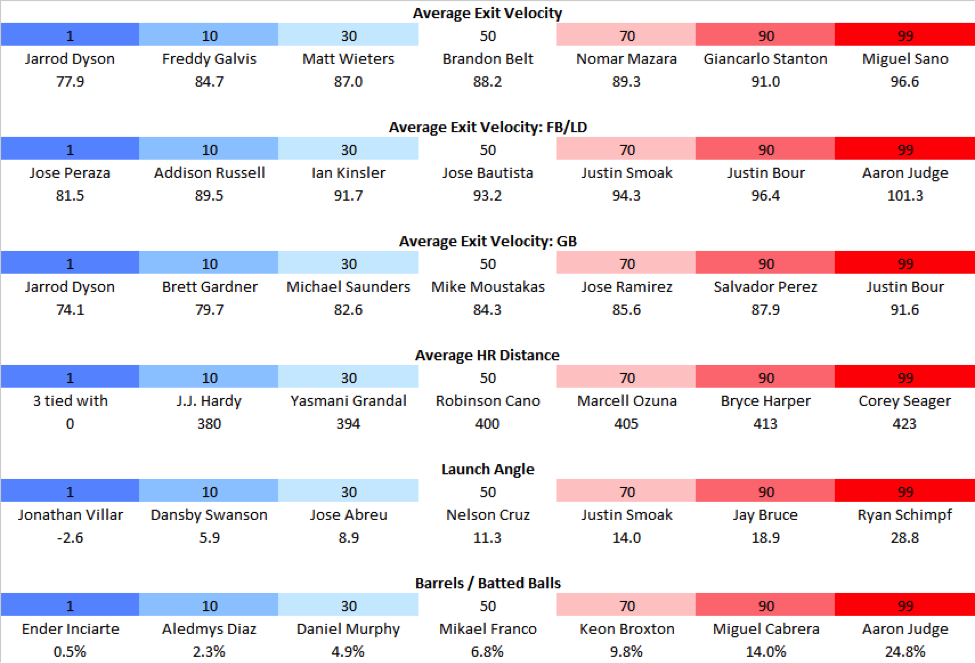 Here we are: the big ones. We’re still struggling to gather context, let alone repeatability, of the new numbers from our Statcast overlords. We’ll struggle for a while longer. The obvious takeaways, in the meantime: balls in the air tend to be hit about 7-10 mph faster than balls hit on the ground, and for that reason many of the leaders in pure average exit velocity tend to be those who have higher fly-ball rates. Most of your prototypical slap-and-dash hitters sink to the bottom of the leaderboard, and there might even be an advantage to this, since the slow ground ball gives a speedy batter a better chance to run it out.

Not included above, but perhaps interesting: the greatest disparity between air-based EV and ground-type is Randal Grichuk, with a delta of 17 mph. The median is nine. Perhaps the most niche fun fact of the season: Jose Peraza actually has a higher exit velocity on the ground (82.2 mph) than in the air (81.5 mph); no other player comes close.

In terms of launch angle, the news is that the era of elevation may not be over yet. The ideal launch angle, at least in terms of home runs, is around 25 degrees, and only our old friend Ryan Schimpf currently exceeds it. Given that Schimpf, even in his distorted mutant profile, has value at the plate, it wouldn’t be surprising to watch more hitters, especially ones with little to lose, sell out more blatantly for power.

It’s not surprising that the median True Average is .271, when the stat generally balances around .260 or so: our selection bias toward regulars cuts a lot of the weaker bench bats out of consideration. Otherwise, because it’s a specifically weighted stat, by default it can only surprise us on an individual level. (I lied, by the way. Mike Trout is back.)

The only real surprise left, then, will hardly be one for veterans of BP’s metrics. Those used to other models, or who still vote on MVPs based solely on triple-crown numbers, will be startled by how dramatic a role defense can play into a position player’s composite value. Jonathan Lucroy’s struggles with framing, once the foundation for hipster MVP arguments, now roots him firmly as the worst position player in the game, below even those Royals from earlier. Meanwhile, DJ LeMahieu … well, let’s just say that defensive numbers are always particularly prone to sample issues.

We’ll wrap up by repeating the same exercise as last week: using my flawed system of ranking each player on each statistic and comparing the standard deviation to derive the "most average" hitter in baseball. Again, like last time, I threw out the question on Twitter. Unlike last time, I forgot to do so until after midnight, and so I received the following responses:

It’s a better collection of talent, it seems like, than we got on the pitching side. But purely in terms of hitting, it can’t be anyone but Nick Markakis. His TAv is a little light, ranking 102nd out of 180, but in terms of wRC+, here’s right there at 100. He has to be there. The world wouldn’t feel right otherwise.

But there’s more than hitting in the world, so after running the numbers, here are your Average Five:

It hardly seems like what White Sox fans would hope for, but after an amazing start to his career, Jose Abreu has slipped to a perfect average. Good old average Jose Abreu.

Nope. It’s Nick Markakis. If Nick Markakis doesn’t show up as the most average baseball player, it just means our numbers aren’t able to fully encapsulate his averageness yet.

You need to be logged in to comment. Login or Subscribe
ADprospectus
Looks like a pretty tight band around average HR distance, which makes sense based on coarse-grained park similarities and an apparent biology/physics cap in the upper 400'-range. As presented here, it probably would be even tighter if you removed the three with an average HR distance of 0'. (Also, to clarify, what would an average HR distance of 0' mean? Not inside-the-parkers, right, since I'd assume those would be assigned a distance based on the hit distance (landing spot of ball, or point the ball's fielded). Home runs that begin with the batter advancing on a dropped third strike?)
Reply to ADprospectus
tearecrules
Three players haven't hit a home run?
Reply to tearecrules
ADprospectus
I guess that's right. (Appears to be down to two-- Dee Gordon and Al Escobar-- as of this morning.) For some reason, I incorrectly assumed on that one that the pool was "all home runs" rather than "all (qualified) players."
Reply to ADprospectus
euqubudhp
Alex Gordon was the third - he hit HR #1 the day after I pulled the data. I wish I could turn these around faster, but they really do take a lot of manual labor.
Reply to euqubudhp