Things are grim for the Cardinals right now. They’ve been disappointing, and worse, they’ve been frustrating. They cough up leads, they make mistakes on the bases and in the field, and the offense is really stuck in neutral. Coming into the season, they had a clear offensive core: Yadier Molina, Matt Carpenter, Aledmys Diaz, Randal Grichuk, Dexter Fowler, and Stephen Piscotty. Two months in, Molina looks too old; Diaz looks too young; Grichuk is in the Florida State League for some reason; and Fowler, Carpenter, and Piscotty simply aren’t producing at a level that might allow them to make up for that.

On the bright side, two Cardinals hitters have emerged as solid contributors, and maybe even a bit more. Jedd Gyorko’s breakout actually began last season, but he’s continued to provide valuable right-handed power. On top of that, the team is now making room for Tommy Pham, and Pham is taking full advantage of his long-awaited opportunity. Through Monday, Pham had 105 plate appearances and was batting .295/.390/.523. At age 29, Pham is going from an interesting platoon outfielder and defensive sub to a legitimate all-around offensive threat.

Pham did an interview with Buster Olney of ESPN over the weekend in which he allowed that he’d made some mechanical changes to help facilitate this leap forward. It’s not hard to see those changes at work. Here’s Pham in 2015:

That’s a fairly flat-plane, opposite-field approach, with a minimal stride and not much in the way of clearing the front hip. He gets his hands moving quite a bit before the pitcher even begins to come home, finding rhythm before anything else.

Here’s a 2017 swing (admittedly, not a perfectly comparable one, or anywhere near that):

Higher leg kick, and as the foot comes down, it turns, and his front hip gets open. The watchword here is not so much rhythm as timing—bringing a torrent of energy crashing into the ball at the moment when it can do the most damage. It’s not a coincidence that Pham has posted the highest isolated power figure of his career this season; he’s made some changes designed to pull the ball more often, and to get it in the air when he does.

That said, Pham also mentioned a change in contact lenses as a contributor to his good showing, and maintained that he hit the ball hard in the past, too. People just hadn’t noticed. It turns out that’s true. In fact, it doesn’t go far enough. The fact is that Pham hit the ball harder in each of his previous seasons with substantial playing time than he has hit it this year.

That doesn’t mean, though, that Pham’s swing changes were misguided. Let’s expand the table above.

Hey, look, Tommy Pham is a member of the fly-ball revolution! Well, wait, no he isn’t.

An average launch angle of nine degrees doesn’t indicate a fly-ball hitter. It’s well below the average launch angle for hitters with a significant number of batted balls, in fact. As the more nuanced voices announcing the fly-ball revolution have consistently said, the fly-ball revolution doesn’t exist. It’s just an anti-ground-ball revolution. It’s about lifting line drives a little bit more, and focusing on taking the ball in the direction (usually the pull field) where it has the greatest chance to return value. It’s about creating more opportunities for things other than singles, because the league has developed too many ways (from climbing strikeout rate to defensive shifts) to both prevent singles and minimize their value.

Of course, there are hitters who are truly focusing on hitting more fly balls. In fact, one of Pham’s teammates is such a player—only it’s not working for him at all. Hello, Matt Carpenter.

More than one thing is going wrong for Carpenter at the plate this year, but this is one key problem for him. In 2015, he hit balls classified by the Statcast team’s system of contact taxonomy as “Poorly/Under” (pop-ups and lazy fly balls) on about 27 percent of all batted balls. In 2016, it was closer to 29 percent. This season, Carpenter has hit under the ball on 34 percent of his batted balls. On pitches right in the center of the strike zone, Carpenter hit under the ball exactly nine times in each of the last two seasons. This year, he’s already done that eight times.

Along with any physical or mental changes to the way he’s swinging, though, has gone a notable change in approach. In 2015 and 2016, as he found his top gear and became one of the league’s most well-rounded hitters, Carpenter had tremendous plate coverage. He’s one of the best low-ball hitters in baseball, and he significantly improved his ability to drive outside pitches over the past few years. This season, that part of his game is gone. He’s not swinging nearly as often at pitches down in the zone, especially pitches away. In the lowest and outermost box of the grid within the zone, especially, he’s allowing pitchers to get a lot of the easiest kind of strike.

Carpenter simply gave up hitting a pitch on which he was one of the best hitters in baseball over the last two years, and has allowed pitchers to rack up called strikes in that spot. In fact, he’s swinging a whole lot less often overall, and is especially laying off anything away from him, relative to the previous two seasons: 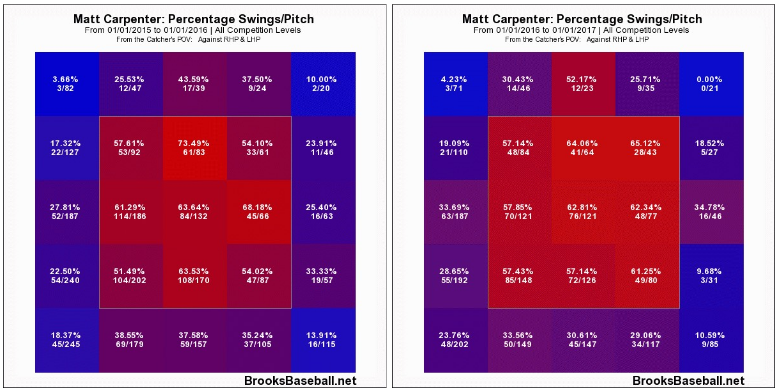 And now, here is this season: 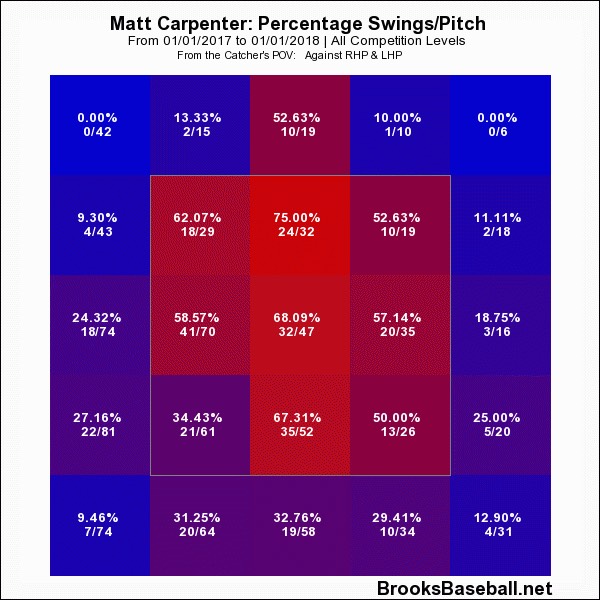 There’s a narrative puzzle here that seems easy to put together. More harmless fly balls, one of the league’s highest average launch angles, more whiffs, and a shift in approach to see the ball up and cut it loose? Carpenter is starting to sound like one of the hitters taking the air-ball revolution too far.

Of course, it’s not that simple. Carpenter does belong to the Brotherhood of Launch Angle, but he was initiated before anyone in the public sphere even knew what they were doing with launch angles. He became a fly-ball hitter, or at least not a ground-ball guy, in 2015, and discovered power he’d never even flashed before. He also got aggressive, in a relative sense, though he was still very patient by the league’s standards. For two years, it all worked like a charm. He posted True Averages of .317 and .313. Why, then, would he have felt the need to make this latest change? Why chase more fly balls? Why give away strikes on pitches he’s been able to hit so well?

The answer is two-fold. First, the frustratingly unquantifiable: he might not be fully healthy. Carpenter suffered a strain of his right oblique last July, and came back from the injury (barely four weeks later) notably diminished. He hit just .229/.316/.410 over the final two months of the season, in 215 plate appearances. It’s possible that injury either never fully healed, or didn’t heal until the offseason—by which time he might have developed some bad habits, like looking for pitches he didn’t need to reach for as much, be it down or away, and letting strikes go by rather than test the tender muscle, or like swinging with his arms more and relying less on his core.

The game keeps closing itself off to Carpenter. Infielders at the vital spots (for a left-handed hitter) are playing him deeper, and infields themselves are shifting against him far more often than ever. In the outfield, Carpenter’s power has opponents convinced, so they’re playing him deeper out there, too. He’s losing doubles, sometimes watching them turned into outs, other times into singles.

Given these phenomena—an injury that might still be holding him back, and opposing defenses making it less valuable than ever for him to hit anything but a homer—Carpenter’s change in approach seems perfectly reasonable. The fact that it was a risky switch doesn’t change that. The fact that it hasn’t worked out well so far doesn’t, either. Now, Carpenter is (even by his own manager’s account) a guy who takes losing and failure hard. He’s intense, and tends to try to blast through adversity.

At age 31 and with a potentially lingering injury, Carpenter might be wise to change in the opposite direction—going back to his 2014 self, with a flatter swing, excruciating selectivity, a little less plate coverage, and a little more contact. Given his personality, though, and the fact that he’s had so much success striving to be a power hitter recently, it’s not surprising that he’s looking to simply knock the ball all the way over all those deeper fielders and shifted infields.

Because we have more granular data on MLB games with seemingly every passing year, it’s always tempting to start talking about replacing measurements of outcomes with measurements of process. In truth, though, almost everything we see on the field is an outcome. Carpenter’s and Pham’s average launch angles are outcomes, where the process is every decision they make to swing, every actual swing, every part of that swing. No one is chasing a single, ideal average launch angle. For the most part, everyone is looking for the kind of pitch they can most consistently turn into positive offensive outcomes, and they’re making whatever changes to their swing allow them to do that without giving something up on other pitches.

Not everyone should be trying to hit more home runs, but for many guys, hits on any other batted ball are getting harder to find. Launch angle matters. Guys like Pham can profit easily from increasing it, because they’re approaching the optimal figure from beneath. Carpenter was already right around his optimal average range, so increasing launch angle hasn’t solved any problems for him this year. On the other hand, it seems possible that he’s not able to do anything else, and it’s almost certain that he needed to make a change like this in order to combat the changing way opponents are treating him defensively.

Statcast data is really valuable in our ongoing effort to understand players better, but in order to tap into that value, we need to understand that all players are unique, and that there are a whole bunch of layers to any conversation that starts with launch angle.