You would think that the Cubs vs. Cleveland matchup from last fall would have been an all-consuming narrative: that the salience of it as a historical event threatened to plow over the granular and the human. Fortunately, that was not the case. We still got Schwarber and Miller, Davis’s home run and Chapman’s abject exhaustion, and the ecstatic improbability of rain delay and comeback.

The Cubs’ victory presented another philosophical problem, though. Was their victory the “end of history,” as far as MLB is concerned, ushering in an era of Cub hegemony and an end to the historical process of baseball narrative? It turns out, just as others who posited the end of history due to world-historical events, those who expected baseball to end, in a sense, were foolish to do so. The Cubs have struggled to float around .500, bogged down at times by old pitchers who have lost their edge and young hitters who have flailed at breaking balls. Maybe you weren’t one of those who bet on a brave new world of baseball in the wake of such an event, but there existed a strain of those who did believe in it, and who did face an identity crisis as a result. 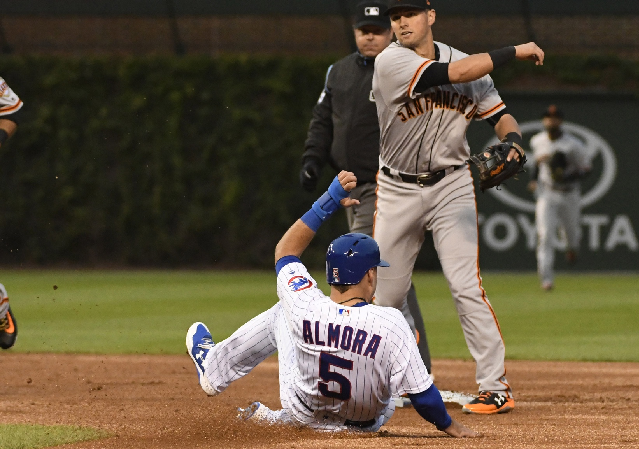 History, of course, is not teleological. It is not the unceasing march toward progress; it is not the inevitable triumph of one harmonious ideology over all others; it’s not even the constant process of synthesis by posed dialectical opposition, although baseball’s head-to-head nature favors such an interpretation more than other areas of life.

No—when we believe we might have witnessed a victory of one school of thought over another, we are often jerked back into a much more complex reality. We see the continued valuation of advanced analytics by front offices, and yet the 2015 Royals ran, stole, and caught their way to a World Series championship. We hope that the racism inherent in baseball’s professional genesis is atrophying, but Mike Schmidt and Jerry Remy rudely and crudely remind us that there are swaths of baseball players, executives, and fans who believe that Latino players are unfit for leadership roles. We observe organized baseball’s continued exclusion of women from the playing field, from the front office, from the stands: the ugly or conspicuous forms of exclusion that many think are relics become the objects of subterfuge and obfuscation. Historical trends have a tendency to not die out, but to go underground for a while, reemerging later, mutated from years of dormancy.

It is a fool who believes their way will emerge victorious without work. You could have invested in the seeming inevitability of a Cubs’ World Series, either from a belief in their team-building methods, or a belief that, in baseball’s longue durée, it will simply come to be. But, not only is there no joy in that (what fan would want to know for a fact that their team will win?)—it has a way of smoothing what should be textured.

On March 18th Adam Jones climbed a fence in San Diego to take a home run away from Manny Machado, preserving a two-run United States lead, on way to their first World Baseball Classic championship. It gave us one of the great sporting photographs of the year: 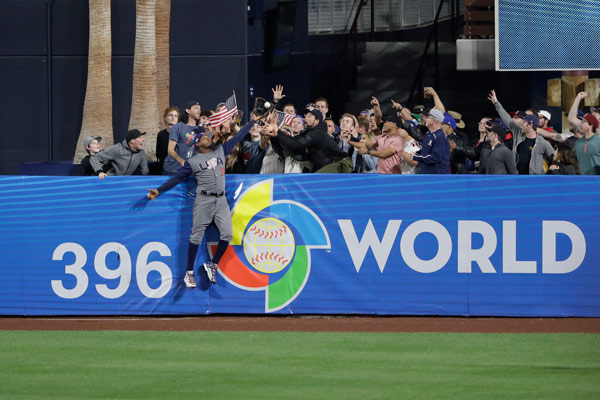 On May 1st, in the same country for which he had just starred on a global stage, Jones had food and racial taunts hurled his way at Fenway Park:

“A disrespectful fan threw a bag of peanuts at me,’’ Jones said, “I was called the

N-word a handful of times tonight. Thanks. Pretty awesome.’’

On Tuesday Hall of Famer Mike Schmidt brought some of the ugliness of our past into our present, saying a non-native English speaking player isn’t “the type of player” he would build a team around.

On Tuesday Red Sox announcer Jerry Remy indicated that he didn’t believe non-native English speaking pitchers, such as Yankees starter Masahiro Tanaka, should be allowed to use translators during visits on the mound. Remy indicated Tanaka should learn to speak “baseball language”.

On Tuesday Mariners shortstop Jean Segura agreed to a five-year contract extension with the team. The Mariners clubhouse is one defined by Latin American leaders in Robinson Cano, Nelson Cruz, and Felix Hernandez. In Wednesday morning’s post on Instagram, Segura thanks God, his wife, and his friend Robinson Cano. He does so entirely in Spanish.

While baseball as life is a tired, overwrought metaphor I think it gets one thing mostly correct: Who we are is defined by not by our best or our worst days, but the totality of our contributions. Baseball requires you to face its challenges, without relent, almost daily for six straight months. Over time that ceaselessness lays bare who we are; not just players and general managers but security guards, concession workers, fans, and former players.

“Baseball has marked the times”, and the reality is our times are hopelessly complex. Prejudice and fear typically meet change with a scowl and raised fists, and baseball is no exception. But Adam Jones, Masahiro Tanaka, Jean Segura, Ichiro, Joey Votto, Gift Ngoepe, Yadier Molina, Brandon McCarthy, Sean Doolittle, Eireann Doran, Melissa Mayeux and countless others are baseball’s present, creating its future, and doing so in a fugue of beautiful, complex and diverse. The droning monotone of the past blares on, however, and only we can silence it. Baseball is indeed marking our times, and they are times of change, and progress. Forward.

If you’re on this site then you’re familiar with the works Josh Donaldson, Justin Turner, and J.D. Martinez. You’re likely also familiar with one thing these three players have in common: that they changed their approach in order to hit fly balls and only mostly fly balls. If it weren’t for a change in their swing, they wouldn’t be the star athletes they are today. And they owe it all to one man. A visionary who, due to a case of his then-girlfriend being diagnosed with mononucleosis, was able to come to a breakthrough on how physics should be correctly applied when hitting a baseball.

No, not Alan Nathan.

No, not Doug Latta.

I’m talking about the former Assistant to the Travelling Secretary of the New York Yankees: George Costanza.

Yes, here lies the real mastermind behind players avoiding ground balls like the plague. We’re talking about the same guy who put the Yankees in the Ramada when they went to Milwaukee. The same guy who built a viable sleeping area under his office desk. For crying out loud, he’s the same guy who got traded for a fermented-chicken based alcohol drink!

In the clip, you can see George Costanza explain to a very young Derek Jeter how by using physics, one can easily calculate a velocity v and its relation to a trajectory t, thus increasing his power output, ergo more home runs. He didn’t have time to explain the whole thing–constraints of the sitcom–but it’s fairly obvious in retrospect: George invented the launch angle.

This would allow a team to win the World Series in 4, not 6, games. Oh if only The Cap had paid attention to the short, stocky, bald guy who tried to teach him the art of hitting. We could have ended up talking about Jeter the power hitter!

Don’t believe the players – and writers reporting on them – who credit Doug Latta with helping them improve their swing path. The degrees added to their swing and the power output to come along with it thanks to another man who most of us decided to ignore but for the sake of a couple of laughs.

George Costanza’s legacy is well-guarded in the annals of 1990s sitcoms, along with other well documented advice, like how to find rent-controlled apartments and deal with Ernest Borgnine. Some of that wisdom is dated, but if there is something we must keep close to heart, it’s that physics will teach you plenty about hitting home runs.

You need to be logged in to comment. Login or Subscribe
heterodude
Do you think Costanza's contribution to the game with LAUNCH ANGLES atones for the cotton uniform experiment?
Reply to heterodude
MartnAR
Well, they did manage to win the next two World Series. How much Costanza contributed to that? We would have to check the Yankees HR/FB ratio, but sure, it still makes up for the cotton shirts, the NYPD bomb squad being deployed to his office, and losing Steinbrenner's birthday card.
Reply to MartnAR
heterodude
Maybe Jeter wouldn't be the leader he became if the Yankees didn't stay in that Milwaukee Ramada Inn?
Reply to heterodude
MartnAR
Perhaps. We can only speculate on the consequences of the wisdom of George and Kramer's errors. Remember, Paul O'Neill wasn't a home run hitter and he got him to hit two in a game.
Reply to MartnAR
heterodude
There's also the very real possibility that the Yankees won three World Series championships in four years because George Steinbrenner started having Calzones for lunch.

Now, if Pawnee had a Major League team it'd be interesting to see how a Low Cal Calzone Zone would correlate with team performance.
Reply to heterodude
MartnAR
Or perhaps the Yankees success is due to Steinbrenner obtaining that fermented chicken drink. The nutrients provided by such a beverage might have pushed the Yankees into overdrive.
Reply to MartnAR
heterodude
They did much better once they kicked that woman in the Orioles cap out of the owner's box.
Reply to heterodude