Last Tuesday, May 30, to be exact. The Marlins are playing the Phillies. When it started, 16,241 people had paid to enter Marlins Park and watch in person. Some other, harder to discern number of people had come home, from work or school or the airport, and flipped to the game on television. Some portion of those—fewer than half, to be sure—had found the Marlins’ broadcast wherein Rich Waltz and Todd Hollandsworth would guide them through some low-stakes action.

Many of those folks have left now. Others have allowed their attention to wander. The Marlins are leading 7-1 in the bottom of the fifth inning and the back end of their lineup is, finally, going quietly. There are two outs and no one on when relief pitcher Dustin McGowan steps into the batter’s box, awaiting the out he will make.

Waltz and Hollandsworth could just sit there in silence and wait with him, sure. But that would violate both the custom of television and the unspoken, overarching mission of passing the time. So they talk. And a question flies.

“Is there any way to compare the swings of Justin Bour and Babe Ruth? The wizards in the truck can do that,” Waltz says. “Side-by-side, for his next at-bat.”

What with the wandering attention, many people, including the author, miss even this verbal prelude. But before long, the image that will devote this short saga to memory appears on the screen. 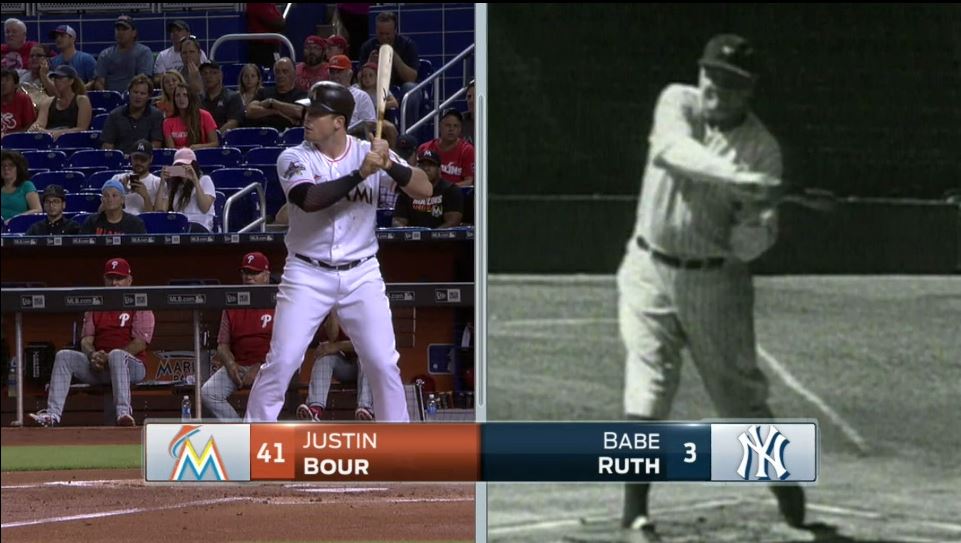 Only a post hoc investigation, a rewinding of the moment days later, will map out the answer of how we got here. But first, would you care to guess?

This would seem a perfectly reasonable connection, mundane by the standards of announcers bound by their obligation to fill two or three or four hours of game time with at least semi-cohesive conversation. Alas, it’s not the case.

Bour hails from Fairfax County, Virginia—the massive suburban home of many who work in Washington—while Ruth was born and raised in Baltimore. Nearby, to be sure. But even the shared lingo and traffic concerns of the two cities, the jumbling into one conjoined metropolitan sprawl, wasn’t known to Ruth. He died just four years after the first mention of building the Beltway, and more than a decade before it actually came into existence.

However much transformation the D.C./Baltimore metro has witnessed (remain awake, please!), professional baseball has likely seen more. Even if they shared this one thing, they wouldn’t really share it. We are inextricably of our own time—unable to truly know or appreciate what Bour might have been in the 1920s, what Ruth might have been today.

This is true in even the most basic of ways.

In 1927, the year Ruth hit 60 home runs, the tallest player who took 400 plate appearances was the similarly named Babe Herman, who stood 6-foot-4. Ruth wasn’t too far behind at 6-foot-2, and he was even closer to being the most massive player—weighing in at 215 pounds. Only one such hitter was heavier: Bob Fotherqill at 230 pounds.

Bour is listed 6-foot-3, 265 pounds. And like Ruth, he’s the second-heaviest hitter getting regular playing time in his day. There are 27 qualified hitters who stand taller this year, and dozens more who see eye-to-eye with him. 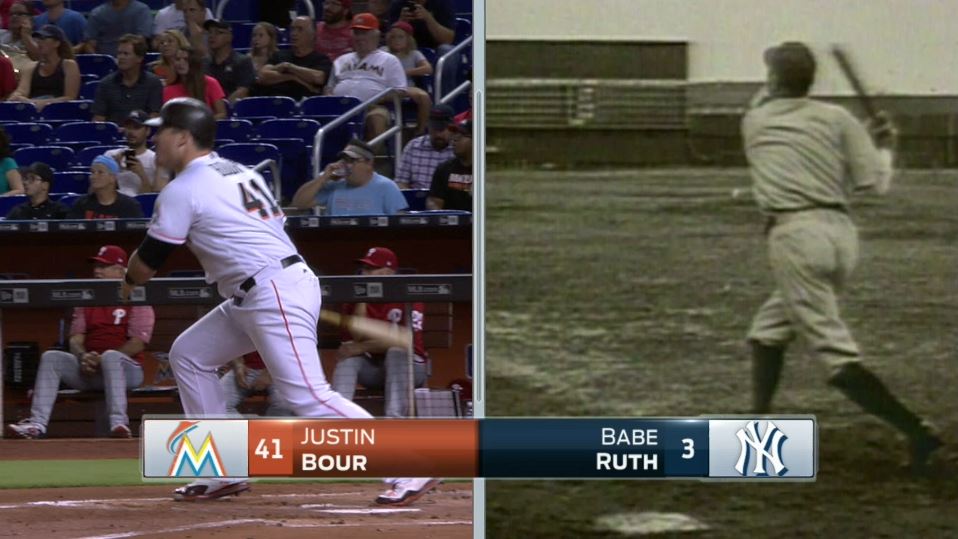 Of course, to look at an image of the two, there’s a difference between Bour’s mass and Ruth’s. Some untold gap in athleticism and training techniques and nutrition and physical prestige. We can guess, but it will remain untold.

I didn’t consult Ancestry.com, but all signs point to no.

Bour is threatening a Ruth record or achievement

Bour’s Baseball-Reference page has an eye-catching little splash of black ink at the moment. After a scorching May, he leads the National League in home runs. Or at least he is tied for the lead with Scott Schebler, as of this writing. Bour came away from his crazy good month with a 1.156 OPS. Even if he sustained it over a full season, it would slot in as the ninth-best year of Ruth’s career.

Ruth, of course, faced vastly less advanced competition (especially considering the prejudicially narrow player pool of the time), but he still significantly outperformed Bour in the context of their eras and peers. Hopefully, this is not coming as a surprise.

The broadcast had a lot of time to kill because of, say, a pitcher injury

Now we’re getting somewhere. Phillies starter Vincent Velasquez does exit the game early, in the middle of an inning. His replacement does have as long as he needs to warm up. That happens in the second inning, though. And the broadcast does not manage to bring up Ruth or Bour. Bob Hamelin, 1994 AL Rookie of the Year, is mentioned.

A fan asked about it

During that lull, Waltz and Hollandsworth start going through questions from fans. It is not just a Tuesday in May. It’s Twitter Tuesday. So of our time.

They address the Bryce Harper-Hunter Strickland brawl. They dole out tourism suggestions for fans visiting Miami for the upcoming All-Star Game—a group that is not likely to be watching the South Florida local broadcast of a weeknight blowout against the Phillies, but whatever.

It’s not until J.T. Riddle grounds out for the second out of the home fifth that they reach for a question from Jim. Noted loyal listener Jim has not tweeted, but instead emailed in his query. He, not Waltz, is the one who wants to know: Can the swings of Bour and Ruth be compared?

Also: “And the question that follows,” Waltz reads, “If Bour had a candy bar named after him, what would the ingredients be? Please ask him.”

They can’t ask him, of course, because Bour is busy playing baseball. But, then again, Ruth wasn’t asked about the Baby Ruth bar, either. The Curtiss Candy Company publicly and absurdly claimed that the bar—released as Ruth made his star turn in New York—was named after the daughter of President Grover Cleveland, who had died during her childhood more than 15 years prior. Not only did they successfully avoid paying royalties to the living, legendary Ruth, they squashed the competing Babe Ruth Home Run Bar—which was actually formulated with Ruth—in patent court. 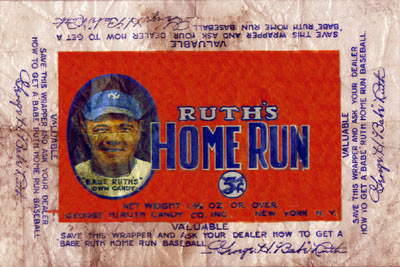 Waltz and Hollandsworth don’t mention any of that, though.

“I just wanted to say nougat.”

I couldn’t find details on what Ruth put in his short-lived candy creation.

Every sport—every thing—is informed by its history, but only in so much as the observer doing the observing is informed of its history. If sports make this enriching of the present any easier when many other things seem to have jumped the tracks, it’s because the basic rules remain largely the same. Like Babe Ruth, Justin Bour captures imaginations (or at least one imagination) by using a bat to swat at a ball.

And most nights, that facilitates admirable moments of curiosity. One person’s thoughts spill into an email that populates the banter of a veteran broadcaster and a 44-year-old who, about half his life ago, could have been called the reigning NL Rookie of the Year and perhaps compared to Ruth himself.

They spin it into the evening workings of some other, greater number of people’s heads, even if for just a moment. It causes a few chuckles. It sparks at least one tweet. It likely sends someone to Google.com looking for something other than the formula to the Babe Ruth Home Run Bar.

The camera catches a few quick shots of Bour, who is not thinking about this, not right now. He’s playing baseball, and we are watching him, wondering about something.