Max Kepler was a project, albeit an expensive one. He left Germany as a 16-year-old in 2009 to sign with the Twins for $800,000, the largest bonus ever given to a European-born amateur. Back then Kepler was a lanky center fielder who oozed athleticism, raw tools, and inexperience, and for the next several years the Twins set about trying to mold him into an actual baseball player. Kepler made his pro debut in 2010 and spent three seasons in rookie-ball, upping his OPS there from .689 to .714 to .925, at which point the Twins promoted him to low Single-A for 2013.

His first taste of full-season competition was delayed by an elbow injury and once healthy Kepler hit just .237, but in 61 games he showed an advanced approach at the plate for a 20-year-old (33 strikeouts, 27 walks) as well as plus power (nine homers, 23 total extra-base hits). Kepler moved up to high Single-A in 2014 and posted a mediocre-looking .264/.333/.393 line in 102 games, but his .726 OPS was 30 points above average in the pitcher-friendly Florida State League and he was the FSL's fourth-youngest regular. While his prospect status was still potential-driven, Kepler did plenty well on the field through age 21.

Kepler made the big jump to Double-A in 2015 and dominated the Southern League from start to finish, winning MVP honors while batting .322/.416/.531 with 54 extra-base hits, more walks (67) than strikeouts (63), and 18 steals in 112 games. At age 22 he led the league in OPS among hitters with 300-plus plate appearances, and if that playing-time qualifier were removed Kepler ranked second in between Kyle Schwarber and Miguel Sano. He debuted with the Twins on September 27, pinch-hitting for Torii Hunter, and made his first career start and notched his first career hit a week later against Johnny Cueto.

After getting his first taste of the big leagues, the plan was for Kepler to begin 2016 at Triple-A and, if things went well, join the Twins around midseason. Instead, he was called up on April 9 as an injury fill-in and mostly sat on the bench for three weeks before going back down. He returned on June 1, played 104 of the Twins’ final 111 games, and held his own on both sides of the ball with 1.0 WARP as a 23-year-old rookie. That included a pair of monster games—two homers and seven RBIs on July 2, and three homers and six RBIs on August 1—to whet Twins fans’ collective appetite for more.

This season Kepler has emerged as one of Minnesota’s best all-around players and a big reason for their surprising climb above .500. He’s second to Sano among Twins hitters in WARP, batting .255/.340/.436 with five homers, 13 doubles, and a 33/20 K/BB ratio, with improved strikeout and walk rates. Serving as the primary right fielder and occasional center fielder, he’s also improved defensively by eliminating many of the fish-out-of-water moments that he stumbled into as a rookie. He’s already surpassed last season’s WARP total and, at age 24, looks the part of an above-average regular on offense and defense.

Kepler was patient as a rookie, swinging at 43 percent of the pitches he saw to rank 47th among 203 hitters with at least 400 plate appearances. Within that overall total, he ranked 64th in out-of-zone swings while having the 10th-lowest in-zone swing rate. If anything, Kepler was too passive on hittable pitches. That’s changed this season with seven percent more in-zone swings, going from 10th to 34th. And he’s managed to increase his aggressiveness on strikes while also laying off even more non-strikes, slicing his out-of-zone swings by 26 percent to go from 64th to 32nd. Swinging less, but swinging at better pitches.

As a minor leaguer Kepler’s power potential was always in question. His pretty swing and 6-foot-4 frame suggested more punch to come despite totaling just 35 homers in 1,949 plate appearances and no more than 10 in any season. Sure enough, he’s matured physically and learned to pull and elevate the ball with authority, resulting in 22 homers and a .185 isolated power through 162 games as a major leaguer. As you can see in the spray chart below, Kepler spreads the ball around quite a bit in general, but all of his home runs (the red dots) have been hit to the pull side of center field. 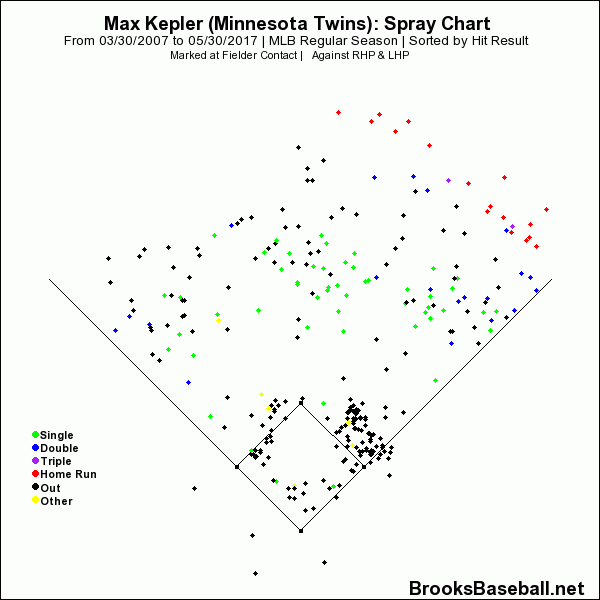 His career batting average should rise considerably from its current .240 mark, which is dragged down by a .270 average on balls in play that ranks in the bottom 10 percent of active hitters. He’s sacrificed some contact skills for power and has yet to utilize the opposite field much, but long term his average should settle closer to .280 than .240. Like many young left-handed batters, Kepler has struggled against left-handed pitchers and will need to show that he can at least handle them well enough to remain in the lineup every day. Better luck on balls in play will help in that regard, but an improved approach is needed too.

PECOTA’s top Kepler comp coming into the season was Ryan Sweeney, which makes sense given how the system likely evaluated Kepler’s track record. Sweeney, the White Sox’s second-round pick in 2003, was a tall, left-handed-hitting outfielder with enough range to handle some center field, much like Kepler. Despite showing minimal power in the minors Sweeney was a consensus top-100 prospect, ranking 69th on BP’s list in 2007, but he never developed enough pop to be more than a decent role player in the majors. As recently as this time last year, that was the fear with Kepler.

Kepler hit .281/.363/.446 in the minors, with 35 homers in 457 games. Sweeney hit .292/.354/.412 in the minors, with 40 homers in 540 games. However, whereas Sweeney totaled just 23 career homers in 682 games as a major leaguer, Kepler has already hit 22 homers through his first 162 games. Because of how quickly things clicked for Kepler once he got on track and how rapidly his power arrived, a comparison to Sweeney no longer makes as much sense, but it’s easy to see why PECOTA’s track record-based evaluation would pair them up prior to this season.

So, who’s a more reasonable comp for Kepler now that he’s shown considerable power? Years ago, when Kepler was just starting to make a name for himself as a prospect, Nick Markakis struck me as a potential career path if things went smoothly. While not quite the same body type, Markakis is a fellow lefty-hitting, lefty-throwing right fielder with enough range to dabble as a center fielder early on in his career. Markakis’ production has dipped in his 30s, particularly in the power department, but in his 20s he hit .292/.360/.441 for a 114 OPS+, with an average of 18 homers, 40 doubles, and 65 walks per 162 games.

Kepler has 22 homers, 33 doubles, and 62 walks through 162 games. He may have a hard time reaching Markakis’ lofty early batting averages, but it seems like a decent comp. Shin-Soo Choo, who was one of Kepler’s top half-dozen PECOTA comps coming into the season, is an even more optimistic version from within the lefty/lefty corner outfielders group, which includes Andre Ethier and Seth Smith as well. There are less optimistic versions too, but Kepler has been good enough so far—with a .261 TAv, 8.1 FRAA, 2.2 WARP, and year-to-year improvement through 162 games at age 24—that it's fair to dream a bit.

You need to be logged in to comment. Login or Subscribe
SkeedTom
Very nice analysis, thank you.
Reply to SkeedTom
kcshankd
Martin Gasparini has since signed for a larger bonus.
Reply to kcshankd
kyledpark
If his favorable Statcast defensive numbers are to be believed, I think Alex Gordon is a decent comp (but maybe a hopeful one).
Reply to kyledpark