The Many Meetings of Strickland and Harper 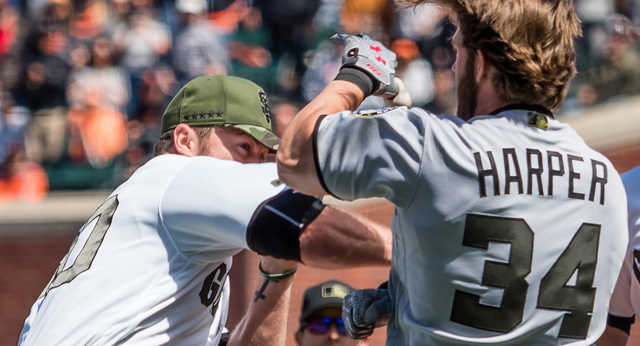 Sometimes, he tries to remind himself of all the reasons that it should not matter. Here is one—when your team wins the World Series, it does not matter so much that a certain member of a losing team hit a few home runs off a certain relief pitcher in the divisional series. Here is another—he suffered no blown save or loss or any such indignity from those home runs. They were nothing. They are nothing, he tries to tell himself.

But now he is back in D.C. for the first time since, and now those well-intentioned reminders also mean nothing. It is the sixth inning, they are scoreless, he has taken the role of the seventh-inning man lately and he can see that Harper will be up soon. This is it. This will be it. But Jake Peavy is still cruising and the call isn’t coming—he has never wanted it so much, every warmup pitch exploding with months of vengeful fantasy—the call isn’t coming—Harper is leaving the on-deck circle, Peavy is still on the mound, it wasn’t supposed to happen this way.

He jogs out a few batters later. It all feels so empty.

It’s stupid, yes—it’s only a one-run lead, they’d pull him before they let him go so far—and yet it feels like it might be the only option. If he just gets to see him again, it’ll all be worth it. Just once. He only needs it once.

And suddenly it’s over. Yunel Escobar hits an easy grounder to short, the out is recorded, his day is done. But he watches from the bench in the top of the next inning as Harper singles off Sergio Romo, and he wonders if he made a mistake.

They’re winning 4-0. He’s gotten his first two guys to go down with relative ease. He knows there is no chance for the match-up he wants: even if they let him go a second inning today, it would take a third to give him the opportunity. But what if they did? What if they just let him go forever? For this, he could. He’s as certain of it as he’s ever been of anything. He still doesn’t know exactly what he’ll do when he gets there—he has spent so much thinking about it, haunted by it, playing over the possibilities like so many tormented movie screenings—but he knows that he could get there, if they’d only give him the space.

They don’t give him the space. He gets Ben Revere to ground out, and there is nothing more.

It is the eighth inning, he has retired two in a row, He Is Coming. It is time.

Lisa at the Bat

In the early 90s, I had two posters on my wall: one titled “Bat Attitude,” celebrating Edgar Martinez’s 1992 batting championship, and one of Lisa Simpson wailing on her saxophone. The Simpsons and baseball: two difficult things to love in early middle school, a time when performative girlhood was at its peak. During the day, I played the role as best I could, swapping Lip Smackers and stuffing dog-eared Teen Beats into my purple Trapper Keeper. But nights were for baseball–except for Thursday nights, which were for the Simpsons.

There are several reasons I wish the internet had been a thing when I was in middle school–not least of which being that I could have found other nerdy, baseball-loving, saxophone-playing girls like myself–but in this case, I mostly just wish there would have been a way for me to know in advance about “Homer at the Bat,” to anticipate its arrival with other fans. I knew from the news and TV Guide there was going to be a baseball episode of the Simpsons, and Ken Griffey Jr. would be involved. But I had no idea how many baseball in-jokes there would be, the cast of characters who would appear. “Homer at the Bat” is a tongue-in-cheek love letter to baseball, an insistent elbow to the ribs from a friend who thinks all this stuff is as cool as you do. It’s also, for someone who didn’t grow up playing Strat-o-matic or reading Bill James or in possession of a baseball uncle who bequeaths you his card collection (mine collected coins instead), a way to be united with something bigger and older than you are.

“Homer at the Bat” made me go to the library (again, oh for the internet) to look up Cap Anson and check out The Natural on VHS. And in the relationship between Darryl Strawberry, cast as the team suck-up, who points out his teammate has “no hustle, Skip,” and Lisa Simpson, who heckles Strawberry to the point of him shedding one small and perfect tear, I saw a little glimpse of two sides of myself. In baseball, Lisa is able to shed her people-pleaser side and give in to the delicious lure of heckling. In so many ways, Lisa Simpson showed me the path forward as a smart and passionate and weird little girl; that it was okay to be weird and love the things you loved without apology. Lisa was the first vegetarian I knew, the first Buddhist, and the first female baseball critic.

This past week, Homer Simpson was “inducted” into the Hall of Fame in recognition of the 25th anniversary of the episode. The induction itself may have been a joke, but the induction “Homer at the Bat” gave me–and countless other early 90s baseball fans–to the church of baseball is both real and enduring.

"LORD PALMERSTON!"
[punches Wade Boggs]
Reply to adrock
dpatterson
"I still like him better than Steinbrenner." One of my favorite episodes, and I've seen'em all.

Reply to dpatterson
lmarighi
25 years later, I am still amazed that they got all of those guys to do a silly voice performance on a show that was only a few years old, and they were able to write such a warm and funny episode around it.
Thank you, Kate, for your memories of the time (I too was just finishing jr. high school when that came out), and another chance to think fondly on Homer at the Bat.
Reply to lmarighi
darthack2661
How they got Clemens to agree to cluck like a chicken is beyond me
Reply to darthack2661