There were several components to the Texas Rangers lackluster start this season—a weak bullpen, an injured Adrian Beltre, an ordinary stretch of poor luck—but chief among them was a severely struggling offense. No part of that offense struggled more severely than Mike Napoli: with a sub-.200 TAv, he’s been the team’s weakest everyday player at the plate. That’s a generally unenviable place to be, of course, but it’s a specifically and remarkably unenviable place to be for a first baseman-slash-designated hitter. And Napoli’s been there all season.

But for the past week, the Rangers’ offense hasn’t been struggling much and neither have the Rangers writ large. After a month of idling in the bottom third of team offense leaderboards, Texas has collectively hit .295/.381/.442 over the past seven days, and they carried a winning streak of six into yesterday as a result.

Almost every member of the Rangers has been getting results at the plate over the past week, but almost is the operative word there. As most of his teammates have started to get hot, Napoli has continued to struggle—until yesterday. He recorded as many hits against the Phillies on Tuesday night as he had in the past six games combined, going 3 for 3 with a walk and a home run.

Napoli's blast, plus a homer by Nomar Mazara and a solid pitching performance from Yu Darvish go Texas a 5-1 victory—its seventh in a row, which put the Rangers at .500 for the first time all year. In just a week, the Rangers have gone from last place in the AL West to second, looking much less like the team they’d been so far and much more like the team we expected them to be. A party at Napoli’s, indeed.

Danny Salazar has the highest strikeout rate of any starter who’s pitched more than 30 innings this year—13.13 per nine, a few decimal points higher than the ridiculous performance streak of Chris Sale. And yet, Salazar’s game hasn’t had much to offer beyond the strikeouts, and Tuesday he showed that perfectly. In five innings against the Rays, he struck out nine. He also gave up five hits, and four of them were home runs. Two of those were near-identical 95 mph fastballs in essentially the exact same ill-fated spot: 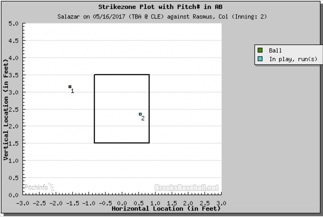 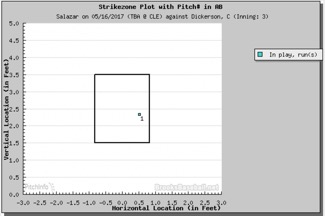 He wasn’t the only member of the Cleveland squad to have a rough night with a lot of strikeouts. Top prospect Bradley Zimmer got the call for his major-league debut, and he made our prospect team look very smart in labeling his strikeout rate as his primary concern in The Call-Up. Zimmer went 0-for-3, striking out in each one of his plate appearances and leaving men on base twice. The Rays won, 6-4.

Matt Kemp is having what appears to be his best offensive performance since his younger and more halcyon days of 2011. He knocked in four runs with a double and a single yesterday as part of the Braves 9-5 victory against the Blue Jays, setting his slash line for the year at .348/.381/.616.

Jake Marisnick hit Miami’s home run sculpture not once, but twice, as the Astros romped to a 12-2 win over the Marlins:

Houston was backed up by starter Dallas Keuchel, who was effective, if not overpowering, in five innings of work. After giving up two runs on four hits, it was just the third time in nine starts this season that he’s allowed more than one run. The result? He’s now the first pitcher in baseball to record his seventh win, and Houston’s grip on the best record in the majors is just a little tighter.

Baltimore tagged poor Detroit starter Matthew Boyd for seven runs in the third inning—or, that is, in the one-third of the third inning that he made it through before being pulled. The Tigers started digging themselves out of that hole as soon as they could, however, and they took a one-run lead in the seventh. But the fact that their bullpen is one of the shakiest in baseball made itself apparent in the ninth, with Justin Wilson blowing the save and allowing the Orioles to send the game to extras.

Things were uneventful until the 12th—when the combination of a Chris Davis home run, a fielding error, and three singles allowed Baltimore to go up by three in the top of the inning. But the Tigers responded in kind, getting five hits off reliever Donnie Hart before he could record the inning’s second out. That comeback bought them another inning, but their opportunities stopped there. Davis hit yet another go-ahead home run in the top of the 13th, and this time it was enough for the win.

This diving stop down the line by Mike Moustakas is impressive enough on its own, but that he then made the throw to first in time is doubly so. Unfortunately for the Royals, that was about all they had to be impressed by in their 7-1 loss to the Yankees.

• After an exhausting saga of an unpaid suspension, a tumult of rumors and a tearful apology, Matt Harvey made his return to the mound this past week. It didn’t go so well, as he gave up three home runs in five innings in a loss to the Brewers. That was the third consecutive start in which he’d given up five or more runs. He’ll do his best not to make it four today against the Diamondbacks, taking on Patrick Corbin at 3:40 p.m. ET.

• The recent struggles of the Giants generally, and Johnny Cueto specifically, mean that a matchup between Cueto and Clayton Kershaw doesn’t quite seem like the appointment viewing it would have been last year or the one before. But it’s still something—and, of course, it’s still Kershaw—and it’s at 3:45 p.m. ET.

• The Rockies took the first game of their series against the Twins, a battle of baseball’s most unexpected division leaders. Minnesota will look to even the score today behind Ervin Santana, who rebounded nicely from allowing more than one run for the first time this year last week with seven innings of shutout ball over the weekend. He faces off against German Marquez at 8:10 p.m. ET.