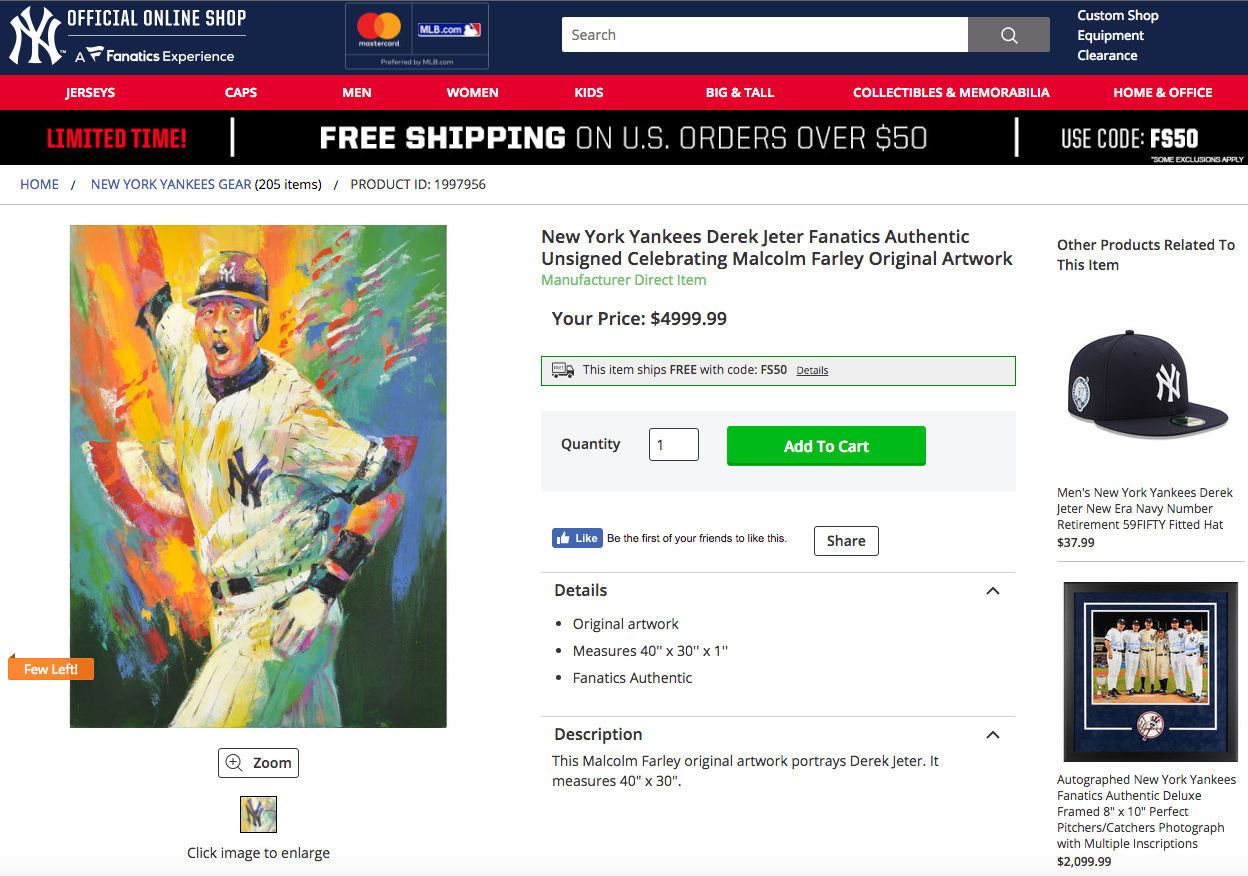 Should I buy this $4,999.99 Derek Jeter Fanatics Authentic Unsigned Celebrating Malcolm Farley Original Artwork? Should I? I am a thirty-year old graduate student crippled by and beholden to the debt economy that is late-stage transnational capitalism, but is that a reason not to take advantage of FREE shipping with code FS50?

My apartment is a single-floor, one bedroom unit in a city I will only inhabit for the duration of my studies, but just think how this baby would look framed over my television as I yell at my lagging MLB.tv stream I rely on because its yearly price costs as much as a single month of cable. Let me ask which would keep you up more at night: worrying what to do with a gigantic canvas after leaving a home you do not own, or missing out on a chance to leave your walls void of pure sublimity by one of the true modern master painters of our generation?

Should I limit my baseball fandom to catching a few bleacher tickets each year and wearing my favorite team’s letter emblazoned upon my hat? Or does that little “FEW LEFT” in the bottom left hand corner force me to realize that like the great Derek Jeter, greatness only materializes in those brief, contingent moments when fear is defeated by bravery, instinct vanquishes doubt?

Just take a look at those details for this aesthetic marvel which costs roughly the equivalent of the current value of my 2008 Kia Sorento:

Are you freaking kidding me? All that and more for seven months of rent and the opportunity to be the first of my friends to like it on Facebook. Sorry, Theodor Adorno. Turns out the culture industry is actually a net positive for humanity.

All things considered however, it’s possible that purchasing this $4,999.99 Derek Jeter Fanatics Authentic Unsigned Celebrating Malcolm Farley Original Artwork would not be in my best interests, both due to the current state of my finances as well as the fact that I would be inviting the aesthetics of a 1993 history textbook into my home when I’m clearly more of a constructivist kind of guy.

No, as it turns out, I have decided to pass on buying a $4,999.99 Derek Jeter Fanatics Authentic Unsigned Celebrating Malcolm Farley Original Artwork after all. I wonder, though…should I buy that $2,099.99 Autographed New York Yankees Fanatics Authentic Deluxe Framed 8” x 10” Perfect Pitchers/Catchers Photograph with Multiple Inscriptions? Could I afford not to?

Yovani Gallardo and the Sea 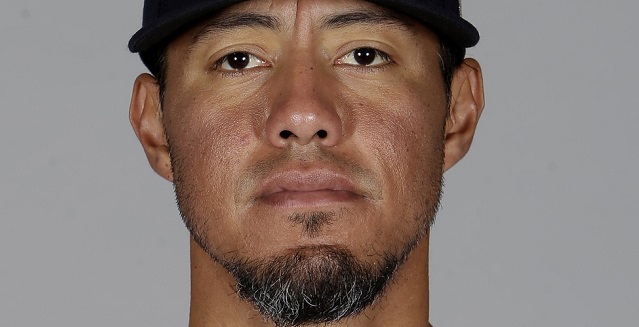 Yovani Gallardo is so very very old. He is not old in a biological sense; his physical body has only circled the sun 31 times. He looks older than that, partly because he cannot be bothered to keep the gray from his beard, allowing the silver-white hairs to spring, incongruous icicles, from the lower third of his face. He looks older than that too because of how he wears his uniform, loose like pajamas, billowing softly in the chilly air of Safeco. He always looks cold. He contorts his face in between pitches like he is checking to see if all the pieces are still attached. He does not care if the camera catches him making these faces, faces that are the equivalent of your grandfather waking up in the morning, the yelp of his bones settling into place for the long day ahead. Yovani Gallardo does not care if you see his face and think it looks odd, or old. He does not think much upon his face at all, anymore.

Yovani Gallardo is not biologically old, but he is spiritually ancient. He has lived many lives and been with enough teams that where he is now is of little consequence. Do you remember the desk where you sat in third, fourth, fifth grade? Of course not. This is the feeling Yovani Gallardo has stepping onto a mound. He makes his pitches with the detached efficiency of a postal worker weighing a series of envelopes. He does not bemoan his mistake pitches, nor celebrate his excellent ones. He knows that he will throw some good pitches, and some bad ones, and many, many more pitches that are okay, that do their job and come close enough to the plate to create hits or not-hits or otherwise advance the narrative of the game. He knows there will always be another pitch to be thrown, until there are no longer more pitches to throw, and he can, at last, rest.

More than any other player in MLB, Yovani Gallardo embodies the Russian idea of toska, a word which Nabokov declared lacking a proper English translation, but also as a “dull ache of the soul, a longing with nothing to long for.” To look upon the face of Yovani Gallardo, Seattle Mariner, is to have the definition of toska inscribed on your bones. It is also to be reminded that one day you too will not think much upon your face, that the peaks of your achievements and valleys of your disappointments will eventually be worn smooth by time, and you will be just this: a figure on a mound, wondering idly whether you have one more pitch in you.

The rules of baseball are untiring in their specificity; the MLB rulebook is more than double the length of that of the NBA or NFL as a result. And in all that space, those 172 pages, there is nothing to indicate how one should handle a situation that occurred this weekend in Progressive Field and a thousand back yards: a squirrel existed.

Visiting manager Paul Molitor appealed to the umpiring crew. Head umpire C.B. Bucknor took on a body language reeking of indifference. The players milled about. The groundskeeping staff at first was not called to do anything, and then was called apparently to only jog in the general direction of the squirrel, while sort of loosely gesturing with their arms until the creature jumped into the stands and became someone else’s problem. Appealing to authority was useless, because all available statutes provided nothing to deal with a problem so serious, or so creative, as a squirrel.

The Official Baseball Rules at no point includes the term “animal” or any variation thereof. It makes clear and seemingly deliberate exclusive use of the terms “person” and “people” when discussing the possibility of a security threat that could require forfeit. And so a pitcher can inadvertently kill a stray bird or a guy in the on-deck circle can be cursed by a cat or an entire team and umpiring crew can be flummoxed by the presence of a single squirrel. Anything goes! There are no rules for this!

This was not a crisis in any conventional sense, because it was a squirrel running through some grass and some dirt. But it was a crisis in a technical sense: a moment when authority is flattened, power structures are disregarded, the rules do not apply. It’s visible so clearly in the responses from the baseball men of the moment—asking someone else to fix it, promising it’s not your job to fix it, doing nothing at all, trying to look as if you are maybe doing something without really doing anything. These tell us more about Molitor, Bucknor and the rest than perhaps anything else could; no matter how specific the rules are, there is always space around the edges for this.

You need to be logged in to comment. Login or Subscribe
Chiefsnark
Emma, this is a situation not without precedent. A couple of years ago a squirrel got on the field at Comerica Park. Attempts to catch it were fruitless and the game went on with what I believe was the first time in history the ruling on the field was, "The squirrel is in play."

Reply to Chiefsnark
JPinPhilly
The Phillies have had multiple run-ins with squirrels. There was the squirrel that ran out on to the field during the 2011 NLDS in St. Louis. In 2015, another squirrel (presumably unrelated to the previous squirrel) attacked Chase Utley in the dugout of a game in Philly. Their opponent that night? The Cardinals.
Reply to JPinPhilly